An inspiring science drama about a ship and its marine research, over a journey of 100,000 nautical miles.

This is a story of ship meets science. 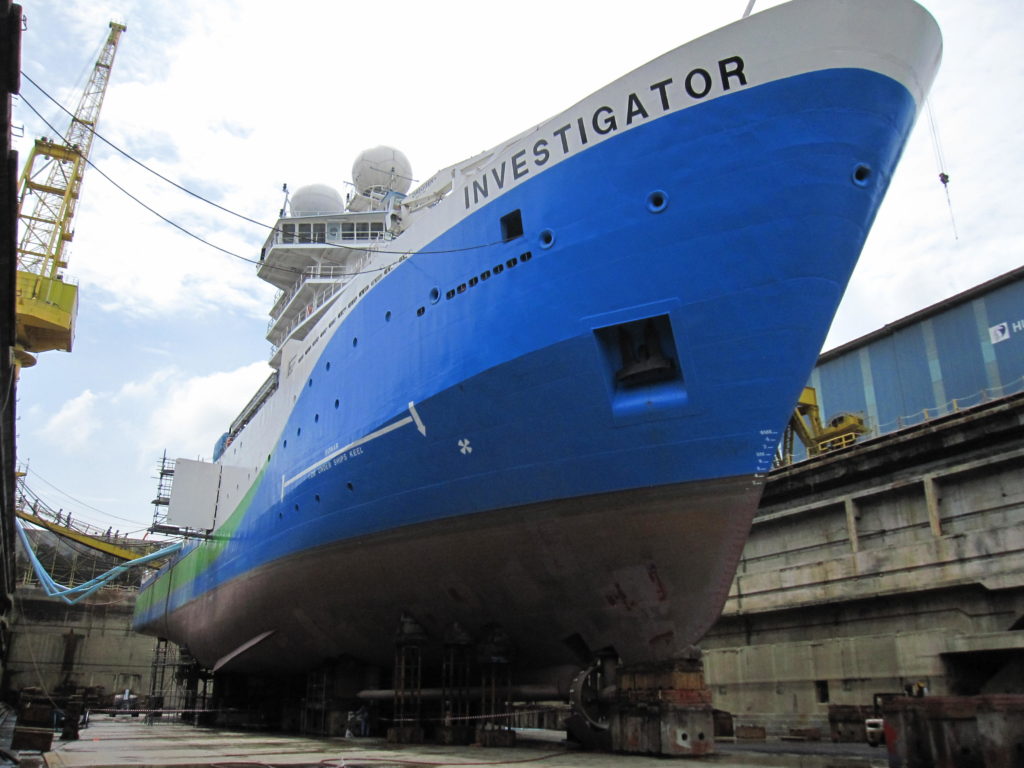 For those converting at home…

The ship is our research vessel Investigator. Newly built, it sits in dry dock at Sembawang Shipyard in Singapore. Freshly painted in blue, green and white, Investigator waits patiently for water to flood the dock to lift it from its supports and float free for the first time.

The ship is a game-changer for marine research in Australia. With capabilities far beyond those of previous Australian research vessels, Investigator will voyage far and do big science. It gives the nation a world-leading scientific edge to help answer big questions about the marine environment and resources, climate and food security.

Installation complete, the ship log is switched on for the first time. The display flickers into life and shows 0 nautical miles (NM). Our journey begins. 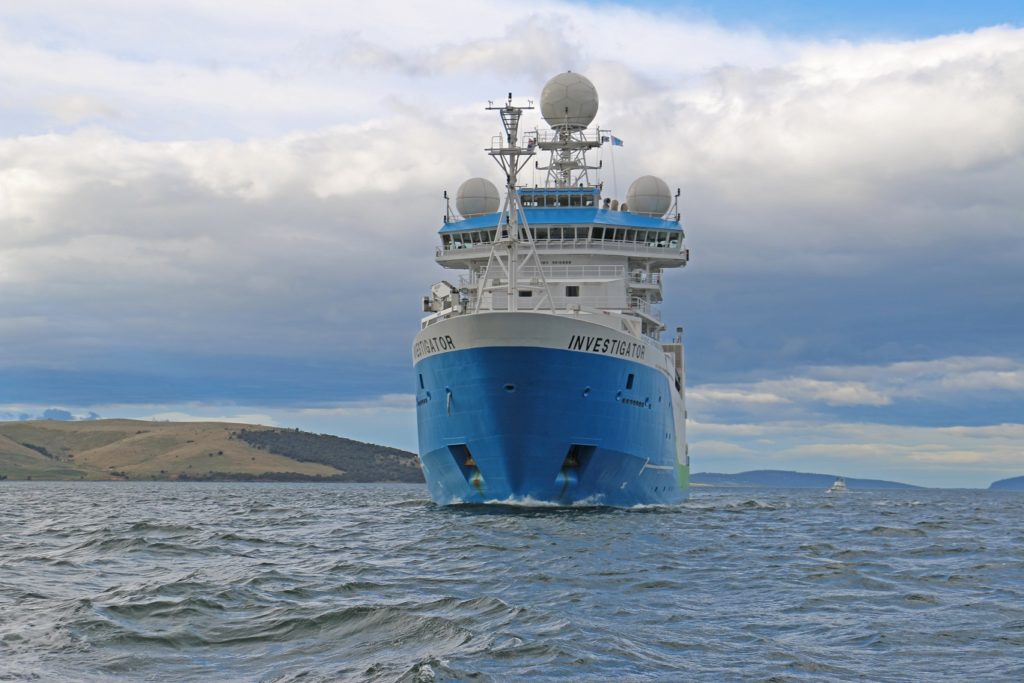 Investigator arrives in its home port of Hobart, Tasmania.

Investigator arrives in its home port of Hobart, Tasmania.

Science takes you places. Investigator has travelled from Singapore to Hobart, and is undergoing sea trials ahead of commissioning. The trials test the limit of the ship’s endurance, taking it past 60°S to the edge of the Antarctic sea ice.

On return, and nearly three years after construction began, Investigator is commissioned at the CSIRO Marine Laboratories in Hobart on 12 December 2014. 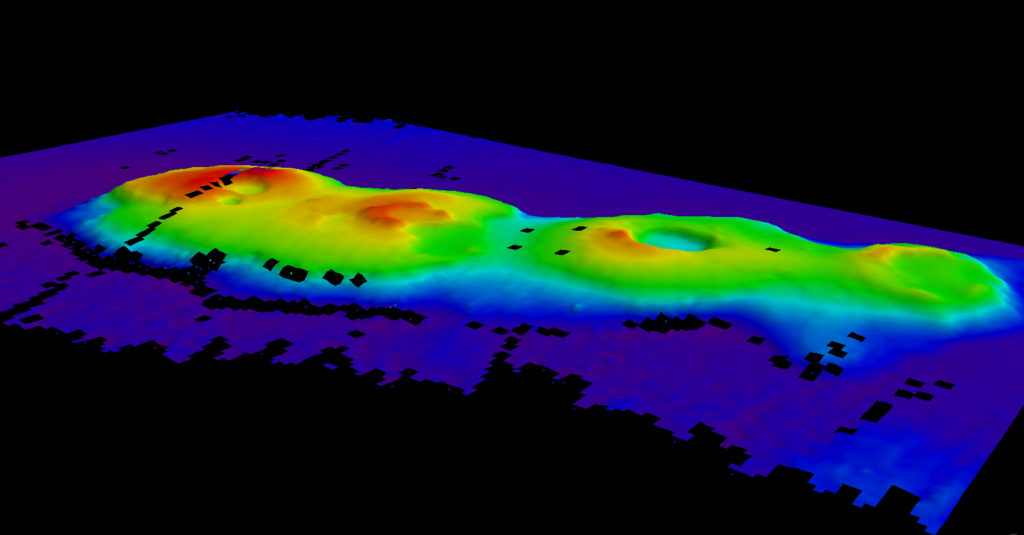 While on a voyage to study the East Australian Current, seafloor surveys pick up some unusual features off the coast of Sydney. They look like a row of egg cups. The egg cups are ancient marine volcanoes, never seen before, but now appearing in bright colour on monitors across the ship.

Scientists watch the story unfold in the evening news as they continue their work on board. This ship runs on a 24/7 mix of high-octane science. 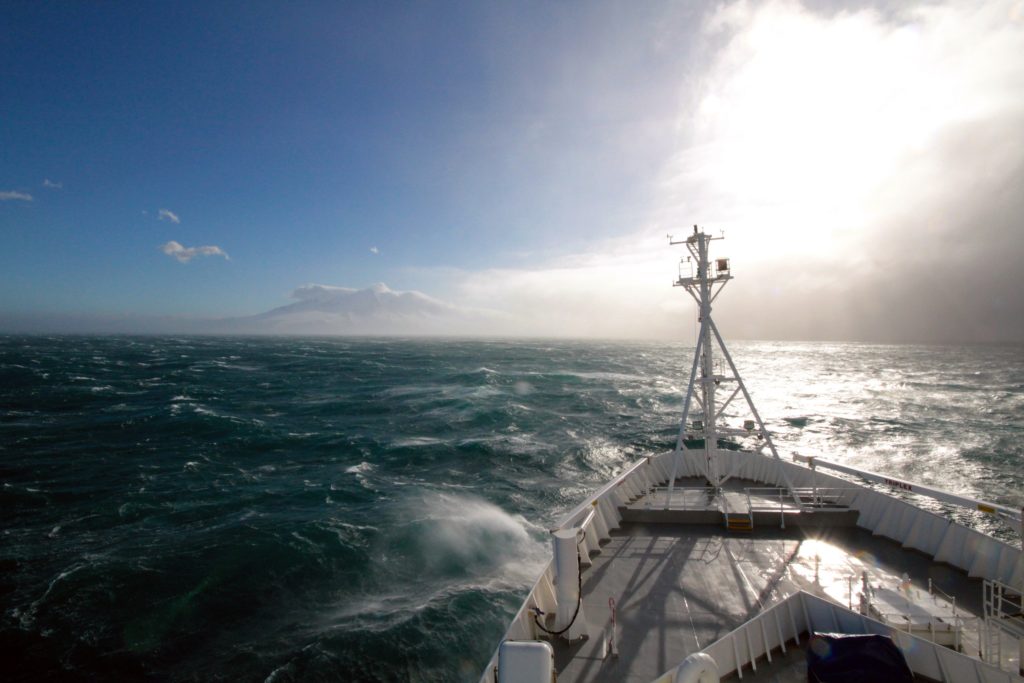 Investigator has journeyed to a remote corner of our vast ocean estate to study volcanoes on the sea floor. While at Heard Island, steam rising from Big Ben signals to those on board that they have arrived in time to witness a rare eruption from one of Australia’s only active volcanoes.

Somewhere in the Southern Ocean – April 2016 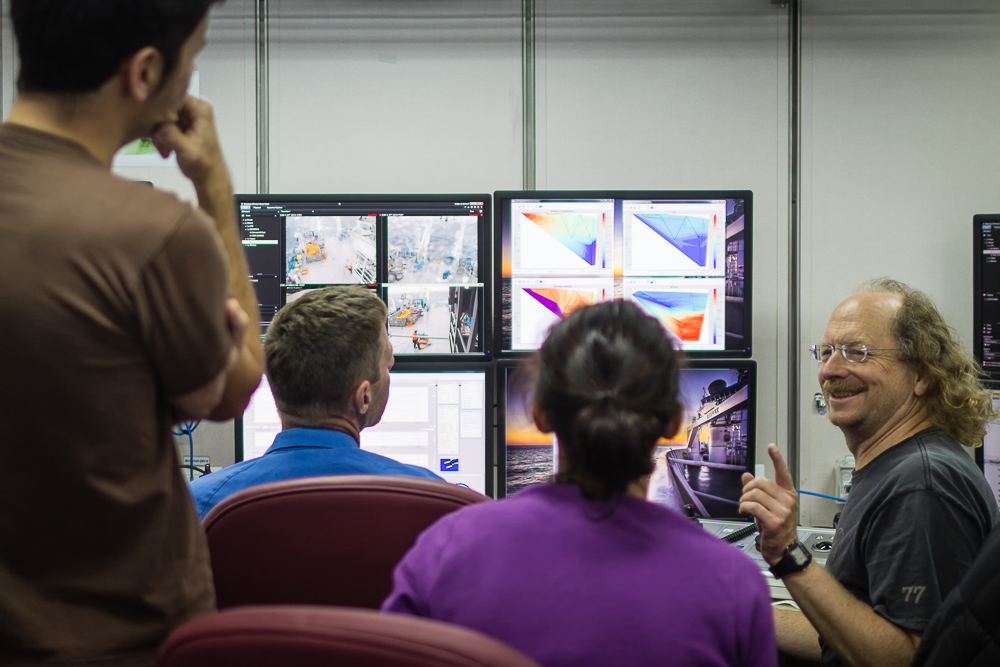 40 scientists walk onto a ship…

Investigator’s great capacity for work has allowed three separate projects to be combined on this voyage to study the Southern Ocean, from the deep ocean high into the atmosphere above.

The mixing pot of scientists, gathered on board from both near and far, leads to the sharing of ideas and knowledge from researchers across multiple disciplines. Importantly, it also gives students on board the chance to learn from world-renown experts in marine and climate science. 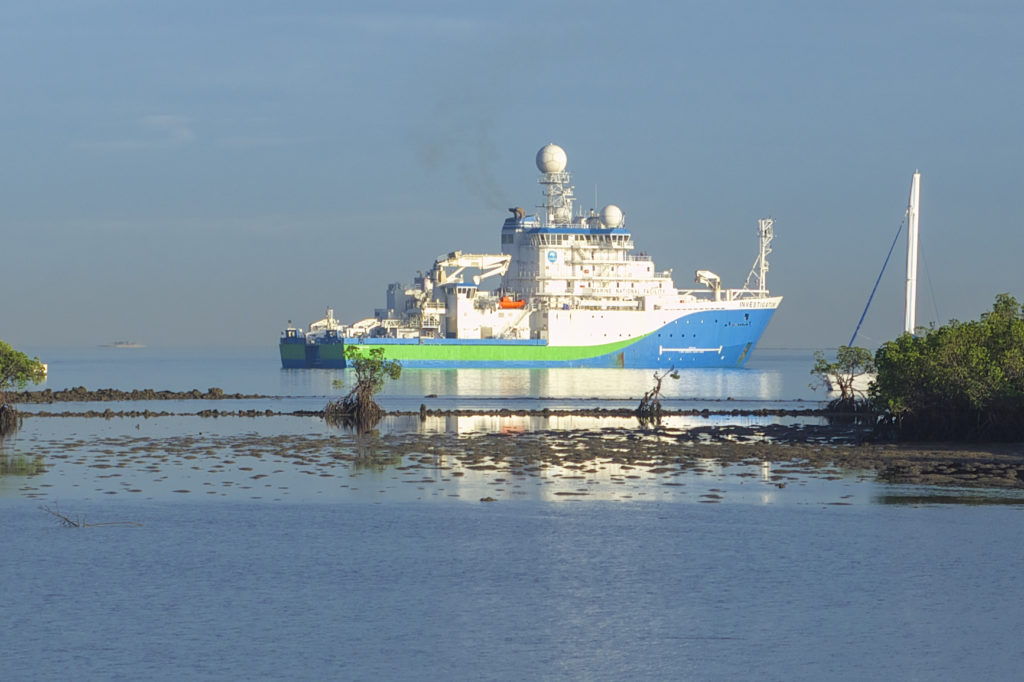 We have better maps of the moon than we do of our sea floor. The advanced mapping technology on Investigator is slowly chipping away at the edges of the unknown on each and every voyage.

A transit voyage back from Fiji provides scientists with the opportunity to collect seafloor samples and map previously unseen underwater landscapes formed during the break-up of Gondwana. 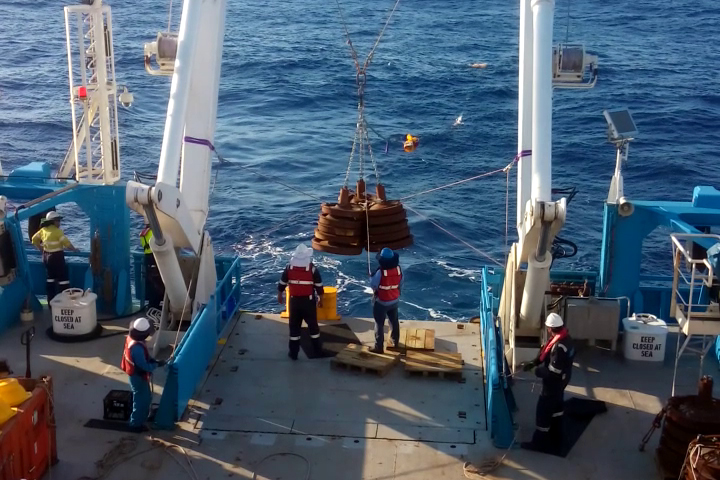 A deep-water mooring anchor stack is deployed from the back deck.

Anchors away! Another mooring is lowered into the ocean. These form part of an important network of monitoring stations in oceans across the planet which feed data into global datasets. This is data that allow us to better understand ocean and climate change.

Before Investigator, these deployments took smaller ships many voyages back and forth. Now, the ship is loaded up and heads out to complete the job in one go. 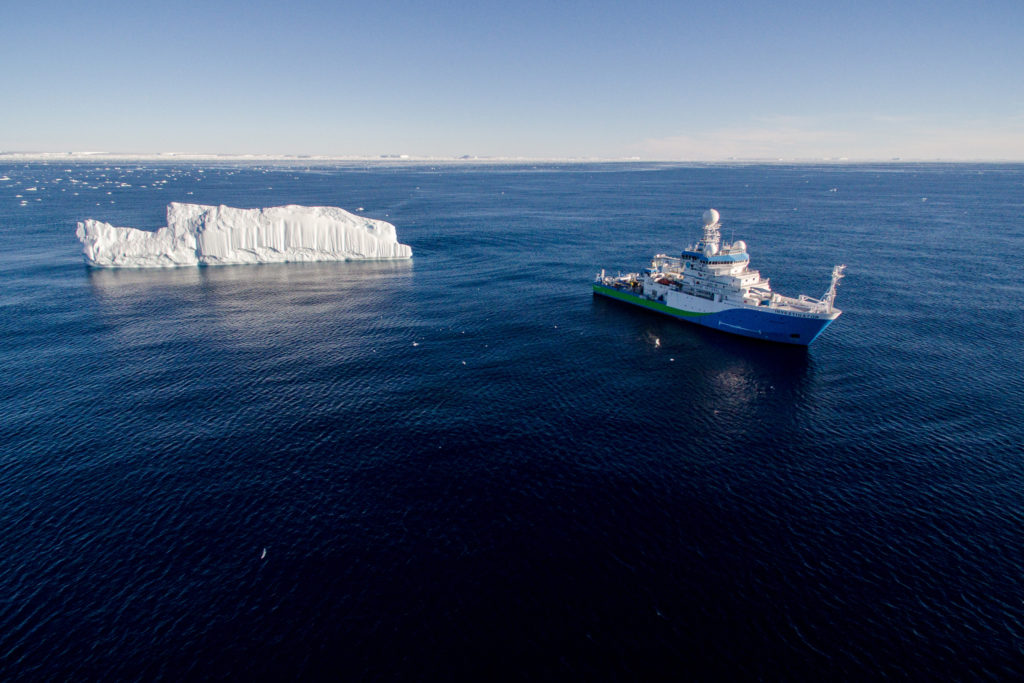 Investigator gets up close to the ice edge in Antarctica.

It takes a lot of patience to study glaciers, especially those at the ends of the Earth! It’s a long way down and a long way back. Luckily, they aren’t going anywhere fast.

Or are they? The science we’re enabling on this voyage will help us find out.

Since arriving, Investigator has now completed 15 research and transit voyages totalling over 400 days of science at sea. 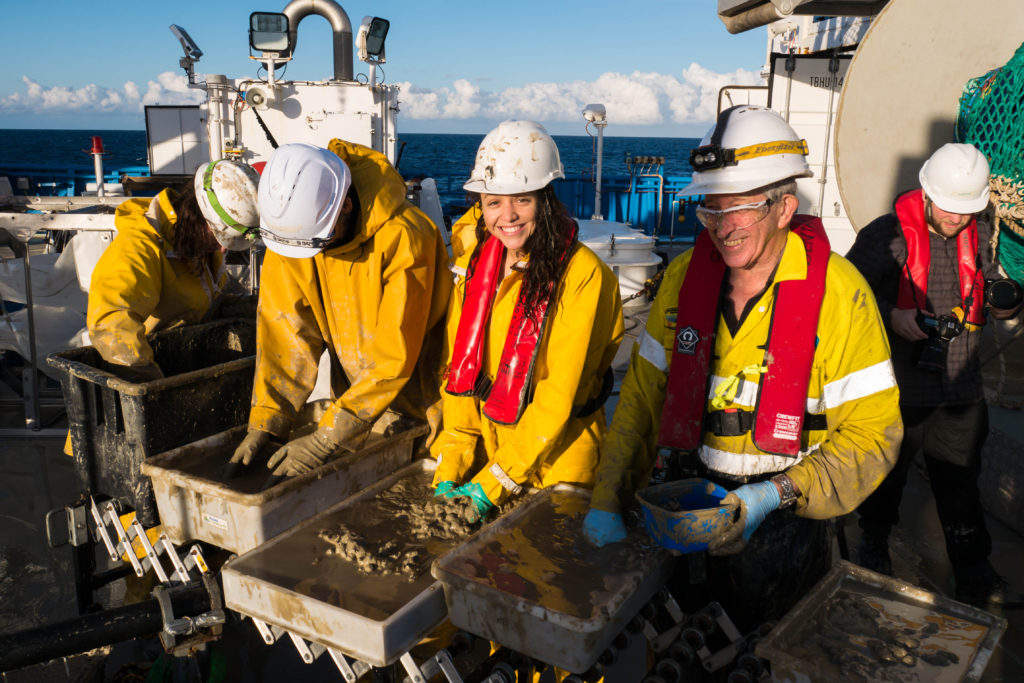 Scientists look for signs of life in sediments from the abyss. Image Asher Flatt.

Marine life can be found in some hard to reach places. Investigator is on a voyage to study life in Australia’s deep ocean abyss off the east coast. Seven Commonwealth Marine Reserves are being mapped and studied. Many of the denizens of the deep discovered are soon to become worldwide science sensations. 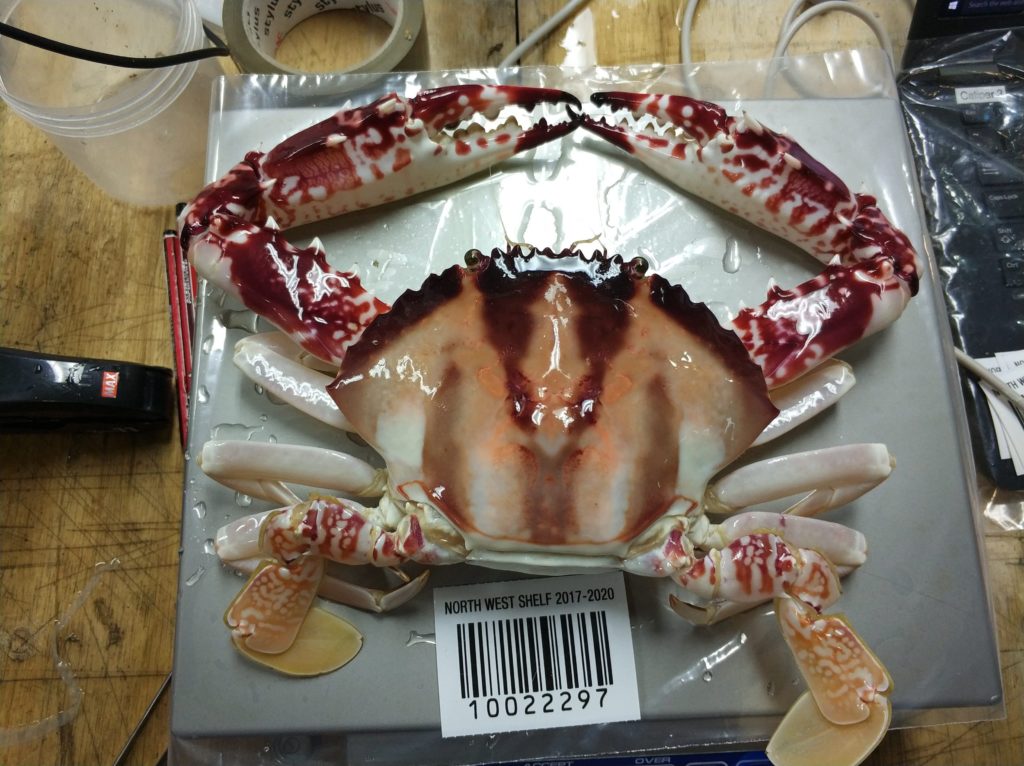 Investigator enables unique studies of the biodiversity in our oceans.

In the warm waters off the coast of Western Australia, Investigator is studying the long term recovery of trawled marine communities. It is part of a circumnavigation of the continent completed during 2017 that saw the ship conduct research in all offshore waters.

It’s our first big lap but it won’t be our last.

Somewhere in the Southern Ocean – February 2018 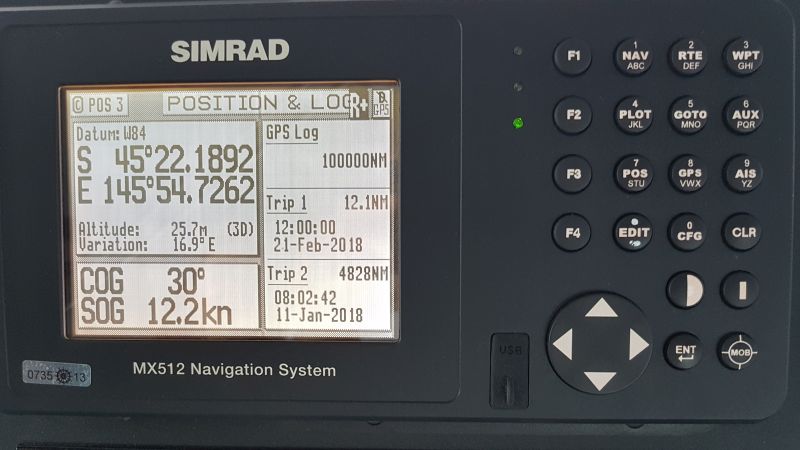 Clocking up the big science miles!

Deep in the Southern Ocean, returning from its first voyage for 2018, Investigator passes a significant milestone on the ship log.

Across the journey, over 800 scientists, researchers and support staff (including over 100 students) from Australia and over 15 other countries have stepped on board as part of voyage science teams.

For the 40 members of the science team on board today, it’s business as usual. The science doesn’t stop to celebrate. This is what the ship does. Big science over the big journey to answer the big questions.

The journey is only just beginning for this ship. It’s still a somewhat precocious teenager. With an operational life stretching out at least 25 years, much more science lies ahead for RV Investigator and our future heroes of science on board.

Stay tuned for the sequel!

Hot off the press, the Marine National Facility has just locked in the 2019-20 research voyage schedule.

Show me the science!

Previous post:
Superman’s X-ray vision ain’t got nothing on us
Coming up next:
Pint of Science: Sometimes science is better over a beer