What creatures lurk in the deep abyss?

What creatures lurk in the deep abyss?

An international research team has just returned from a voyage of deep sea discovery in Australia's eastern abyss. Check out the mysterious creatures they found in the deepest, darkest chasms of the ocean.

An international research team has just returned from a voyage of deep sea discovery with an astonishing variety of weird and wonderful creatures from Australia’s eastern abyss.

Considered one of the most inaccessible and unexplored environments on the planet, the team led by scientists from Museums Victoria pulled into port with a precious cargo of bizarre, unusual and even unnerving deep sea species discovered in the abyss – a dark, crushing environment 4000m below the surface.

Research in other parts of the world has found that life in the abyss has evolved many highly unique ways to survive.

The species discovered during this voyage will help provide important baseline data about the biodiversity and distribution of life in the deep ocean around Australia. More than one third of invertebrates and a number of the fishes found are completely new to science.

Called Sampling the Abyss, the 31-day voyage on our Marine National Facility research vessel Investigator brought together scientists from Museums Victoria, CSIRO, and other Australian and international museums and research agencies.

So without further ado, let’s meet these abyssal finds. 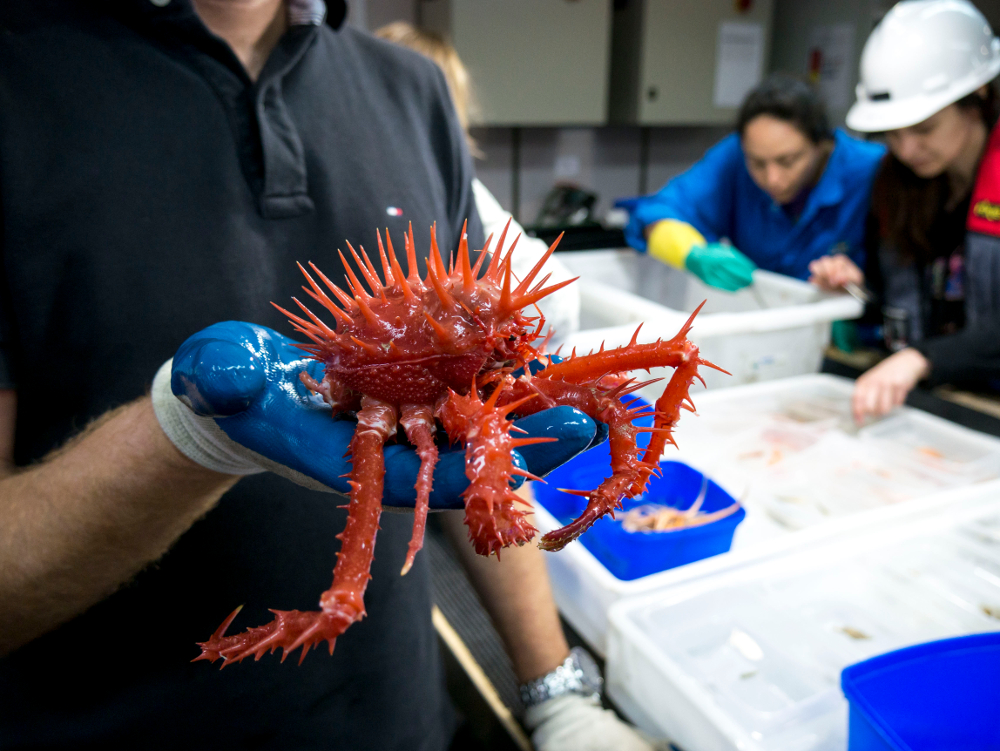 Red spiny crab. Credit: Asher FlattThis bright red spiny crab sports an armour of spikes tailored to protect it from the dangers of the deep. These are not actually true crabs but related more to hermit crabs, although this hermit has traded in its shell for gnarly spikes. 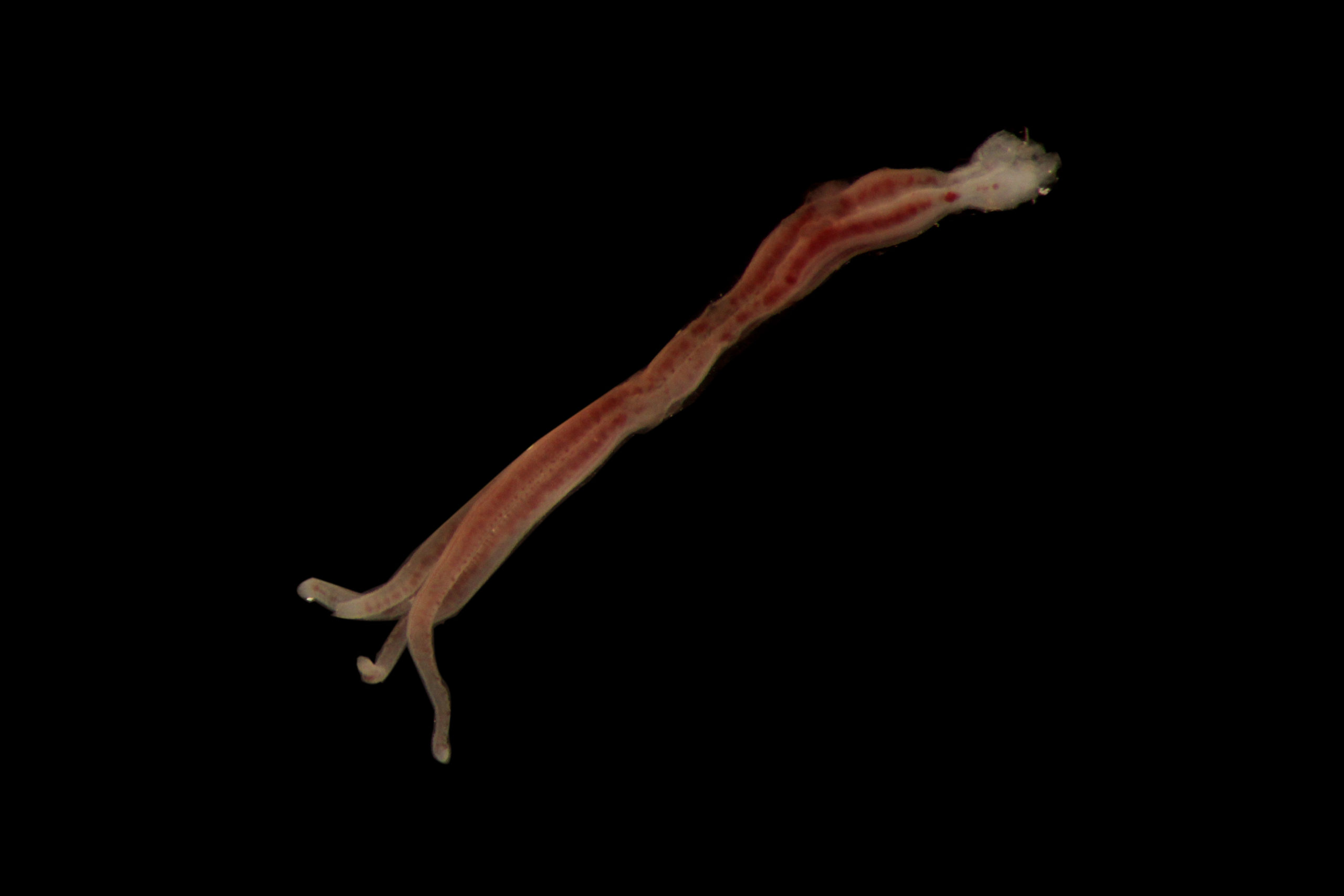 Zombie worm. Credit: Maggie GeorgievaZombie worms are commonly found in the decaying remains of whales on the ocean floor, burrowing into their bones to reach the sustenance within. With no functioning mouths, guts or anuses, they have bacteria that digest these grisly remains for them. 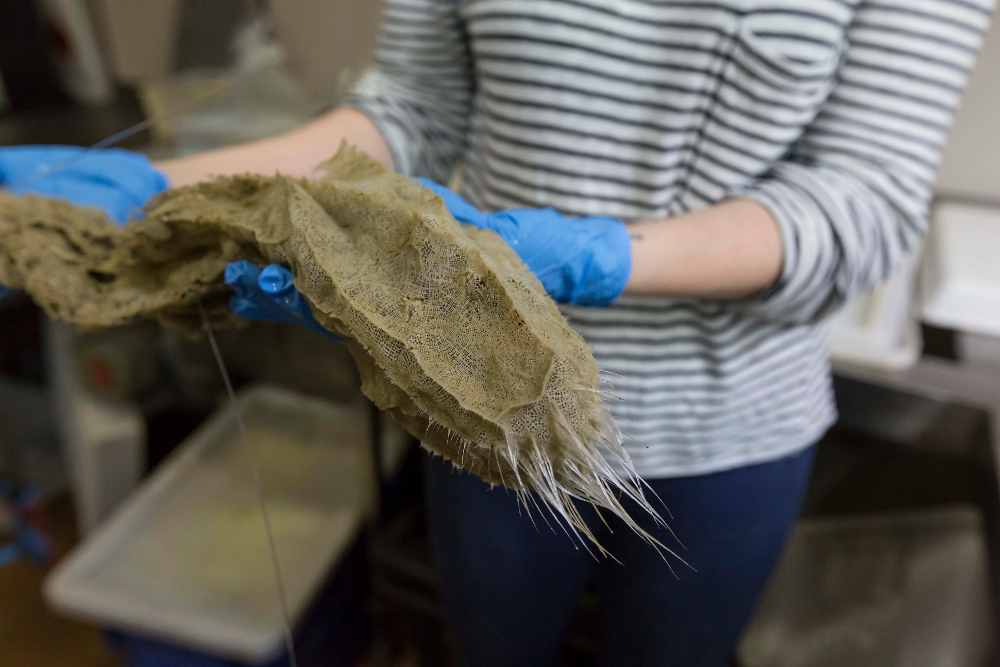 Glass sponge. Credit: Rob ZugaroThese incredible glass sponges have a skeleton made of a lattice of silica fillaments, some of which can be up to a metre long! They feed by sifting bacteria and other single celled organisms from the water gently passing over their delicate glass housing. 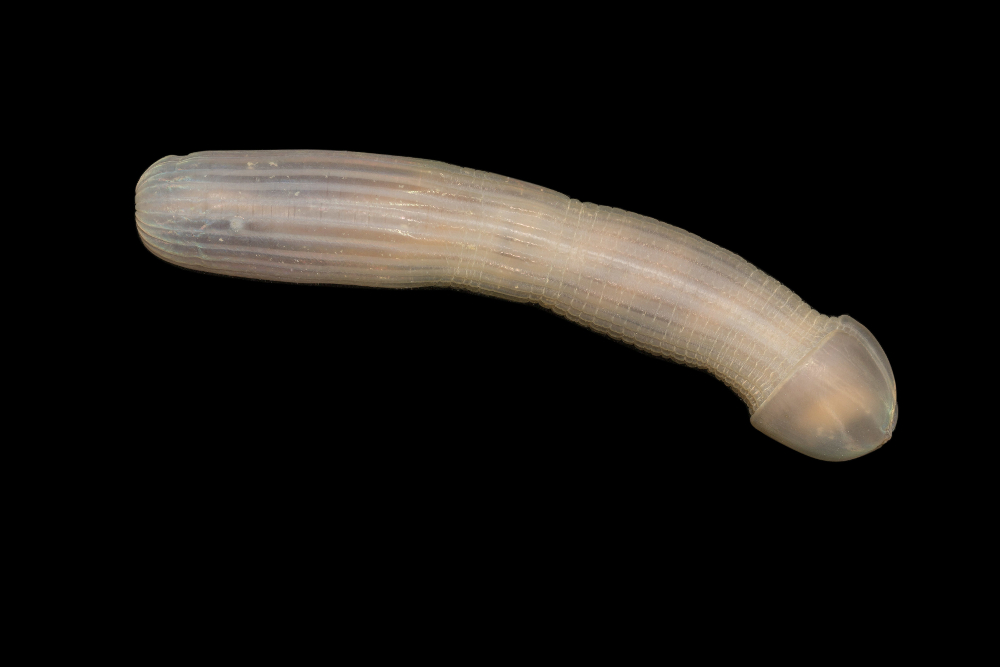 Sipuncula or peanut worm. Credit: Rob ZugaroWe know what your thinking and no, it's not a sea cucumber. The peanut worm, not to be confused with the penis worm (despite appearances), is a deep sea worm resembling a... we'll leave it up to your imagination. When threatened they can contract their long head inwards and more resemble a peanut. They can reproduce both sexually and asexually. 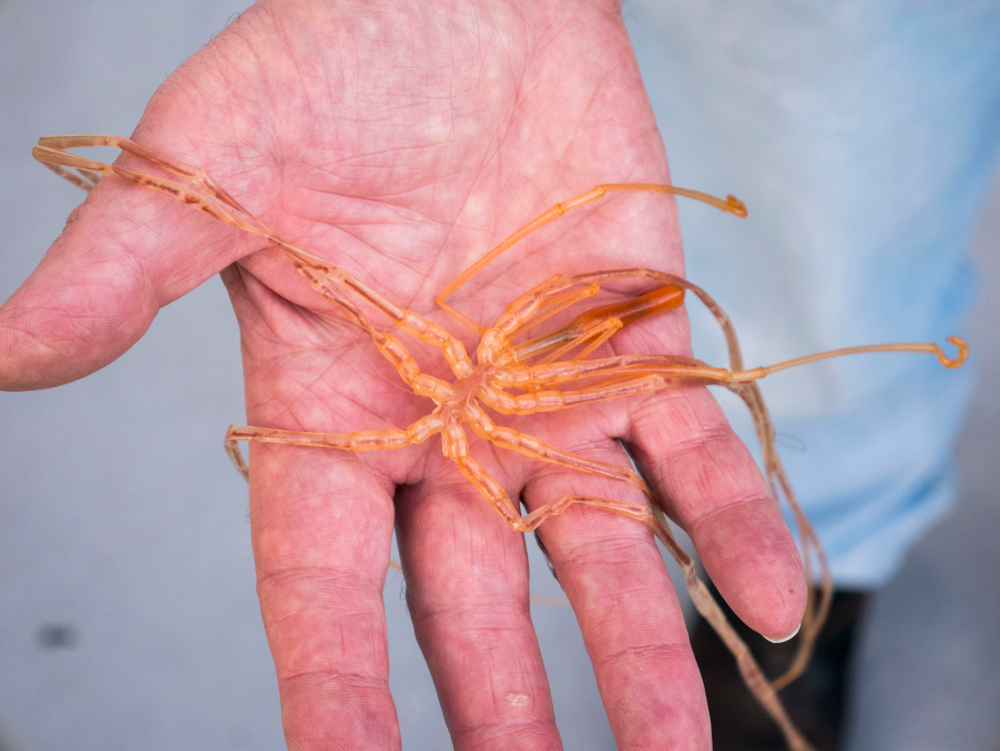 Giant anemone-sucking sea spider. Credit: Asher FlattThese alien lifeforms are not actually spiders at all but one of the oldest arthropods to grace planet earth. Simplicity is their motto, being little more than a tube within a tube. Many of sea spiders have legs that glow in the dark. 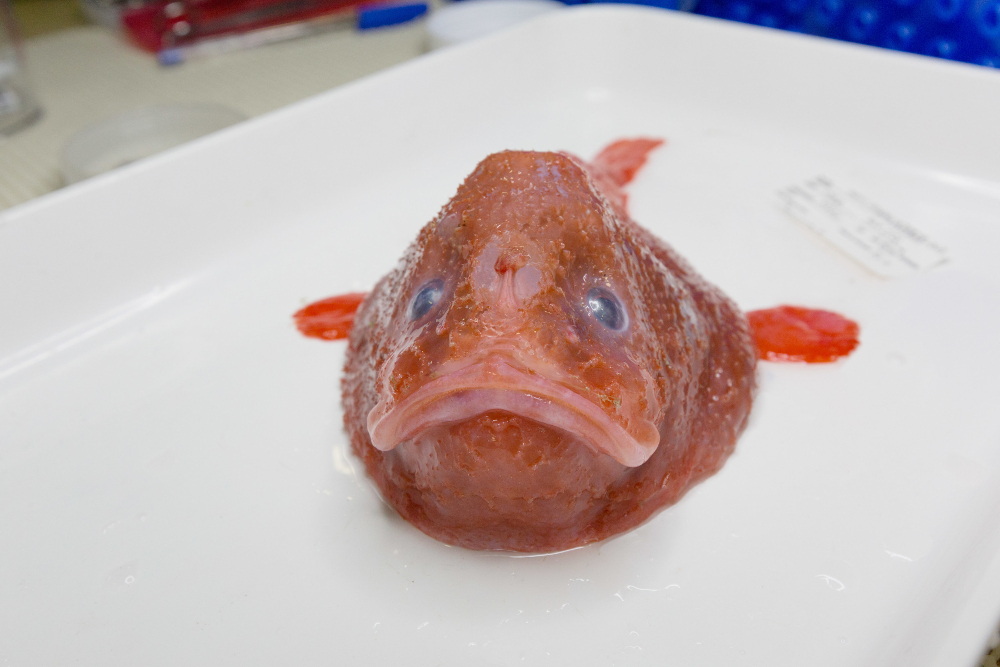 Red coffinfish. Credit: Rob ZugaroThis mysterious little deep sea coffinfish with its bluish eyes and red feet belongs to the anglerfish group. It attracts unsuspecting prey using a fishing rod tipped with a fluffy bait on top of its head. When threatened coffinfishes often inflate themselves with water to make themselves look more menacing.

This little guy is the deepest one collected in Australia and is potentially a new species. 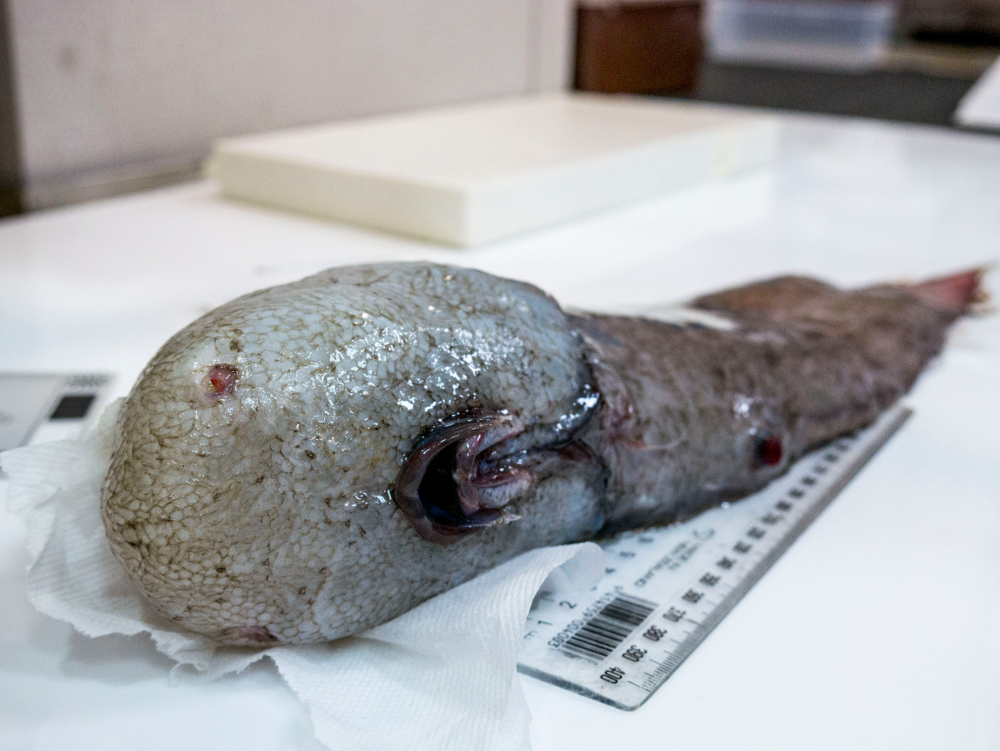 Faceless Fish. Credit: Asher FlattWith no eyes and a Mona Lisa smile, the “faceless” fish had the crew completely baffled when it was brought up from 4km below the surface.

The team were already conjuring up possible new scientific names when John Pogonoski, of the CSIRO’s Australian National Fish Collection, found it while flicking through the pages of the scientific literature aboard.

Turns out the species was first collected in the northern Coral Sea more than 140 years ago during the Voyage of HMS Challenger, the world’s first round the world oceanographic expedition. 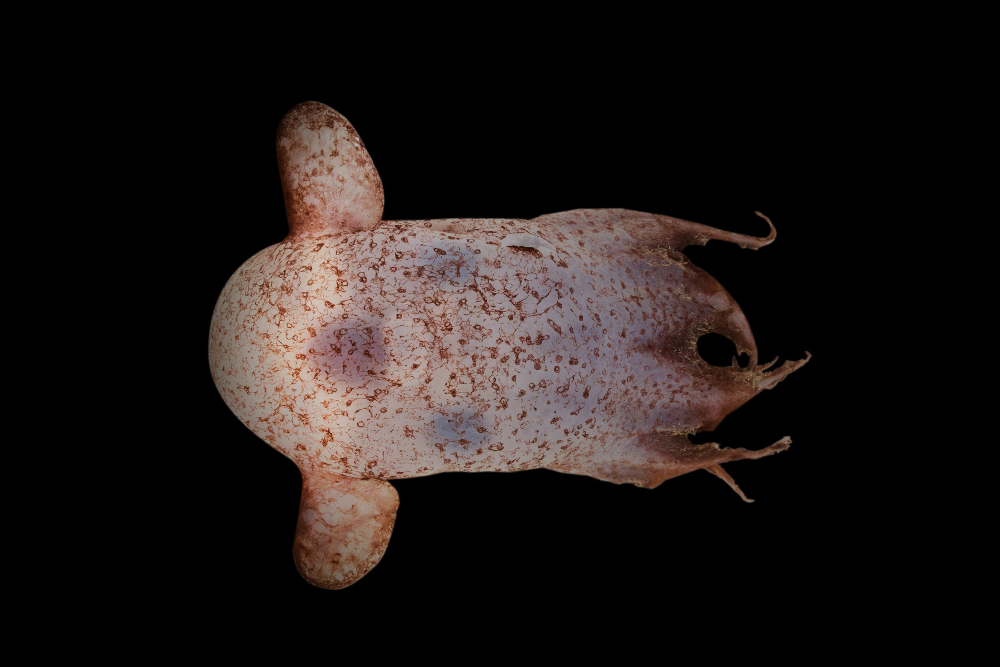 Dumbo octopus. Credit: Rob ZugaroThese octopus flap their ear-like fins to fly, just like the Disney character of the same name, except this animal flaps its ears to glide gracefully through the deep dark abyss. 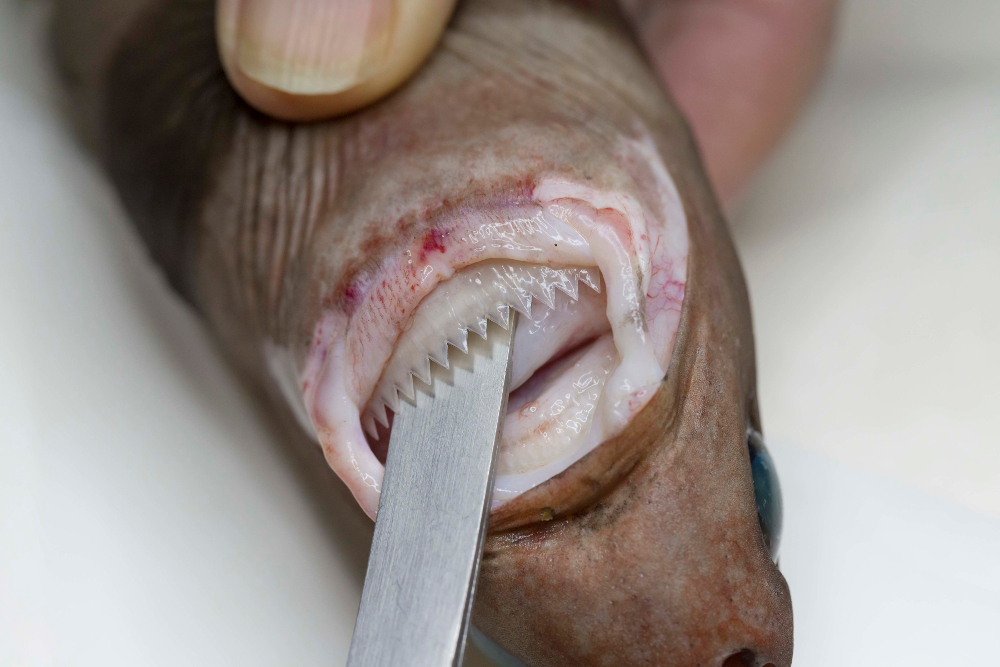 Cookie cutter shark. Credit: Rob ZugaroThis is a nasty little bioluminescent shark with its neatly arranged serrated teeth inhabits the oceanic ‘twilight zone’ in depths to 1000m. It preys on big fishes, whales, dolphins and the occasional unfortunate swimmer, latching onto them before gouging out cookie-sized chunks of flesh. 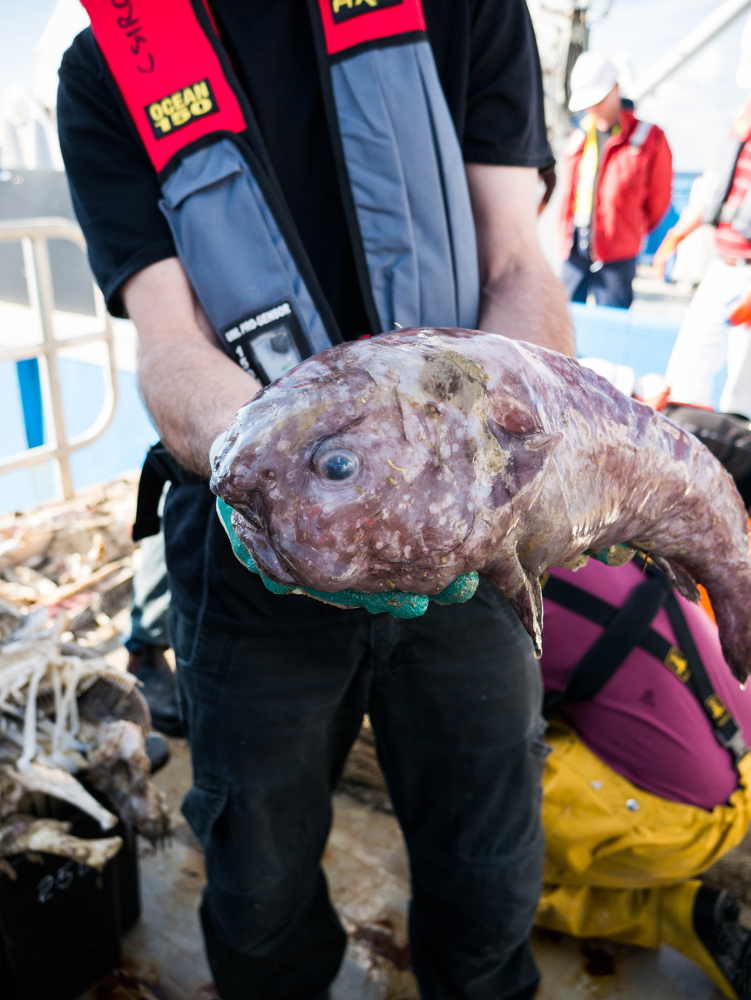 Blob fish. Credit: Rob ZugaroMr Blobby, the social media phenomenon that was collected in the Tasman Sea in 2003 was voted the World’s Ugliest Fish in 2013. Like his cousin, this blob fish collected from a depth of 2.5km off New South Wales, has soft watery flesh and is an ambush predator that lies very still on the bottom waiting for unsuspecting prey to pass by.

More important findings from this research will be released in the coming months as data and specimens are analysed in  institutions around Australia.

In the meantime, find out more about our research vessel Investigator.