Our Low-Carb Diet Book helps people with or at risk of developing type 2 diabetes. We know it can be tricky to start a new diet, so we've created some videos so you can cook along with us! 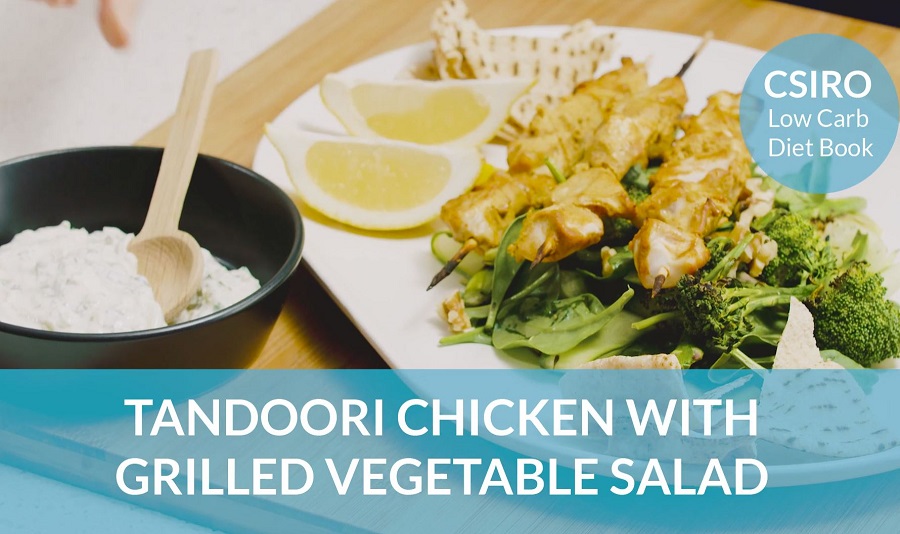 Approximately 1 million Australian adults have type 2 diabetes and over 2 million people are pre-diabetic.

That’s why we undertook one of the largest and most complex diet and lifestyle intervention studies in Australia, comparing different dietary approaches for managing type 2 diabetes.

The results of the study is creating a paradigm shift in our thinking about how we should manage type 2 diabetes.

Those following the low-carb diet had:

So, to help the many Aussies battling this disease, we’ve developed the CSIRO Low-Carb Diet book. The book provides an easy to follow, structured meal plans including recipes, clear descriptions of low-carb versus high-carb foods, shopping lists and a complete exercise plan.

We know it can be tricky to start a new diet, so we’ve created some videos so you can cook along with us!

Beat the egg white in a bowl with an electric mixer until frothy. Add the cream of tartar and beat until soft peaks form, then beat in the tahini, stevia granules and spice until combined. (The mixture will be thick but not airy.) Fold in the nuts, sesame seeds and orange zest. Add the oats and use your fingertips to to gently rub them through the mixture until everything is coated.

Spread the mixture evenly over the prepared trays, keeping little clusters of mixture together for extra texture. Bake for 15 minutes, stirring gently after 10 minutes, or until it is just starting to smell toasted. The mixture will not brown very much but will start to feel dry. Remove from the oven and cool completely on the trays.

For each serving, place 1/2 cup (46 g) toasted muesli in a small bowl and add 75ml milk. Serve with 40g yoghurt and a sprinkling of extra orange zest.

Store the granola in an airtight container for 2-3 weeks.

To make the tandoori chicken, place the yoghurt, garlic, ginger, lemon Juice, tomato paste, garam masala, coriander, sweet paprika, hot paprika or chilli powder and turmeric in a small bowl and whisk to combine, then season to taste with freshly ground black pepper. Thread the chicken evenly onto the soaked skewers (see note), then place in a baking dish and add the tandoori paste, rubbing it in well to coat evenly. Cover with plastic film and marinate in the refrigerator for at least 30 minutes (or up to 3 hours).

Place the chicken on a wire rack over the lined tin, spoon over any marinade remaining in the dish and roast, turning halfway through cooking, for 25 minutes or until cooked through and starting to crisp around the edges.

Meanwhile, to make the raita, place all the ingredients in a bowl and season to taste with pepper. Whisk to combine, cover with plastic film and refrigerate until required.

Heat a chargrill pan over medium heat and spray with olive oil. Working in batches, chargrill the broccoli and broccolini, turning occasionally, for 3-4 minutes or until tender and grill marks have appeared. Repeat with the asparagus, grilling for 2-3 minutes. Transfer to a large bowl and set aside until cool.

Add the spinach, cucumber and pecans to the broccoli mixture, drizzle with extra virgin olive oil and lemon juice and toss gently to coat.

Divide the salad and chicken evenly among four plates or pile onto a large serving platter, then serve with the raita, pita and lemon wedges to the side.

Place the soy sauce, rice wine or sherry, hoisin sauce and 2 teaspoons of the olive oil in a small bowl and mix to combine. Place the pork in a glass bowl, add the soy marinade and stir to coat. Cover with plastic film and marinate in the refrigerator for 30 minutes or up to 2 hours.

To make the cauliflower ‘rice’, working in batches, place the cauliflower in a food processor and process until finely chopped to resemble grains of rice. Heat a heavy-based non-suck frying pan over medium heat and spray with olive oil. Add the cauliflower and cook, stirring, for 5-6 minutes or until warmed through. Cover with a lid or foil to keep warm and set aside.

Heat 1 teaspoon of the oil in a wok over high heat, then add the almonds and five-spice powder and stir-fry for 1 minute or until golden and fragrant. Set aside. Add half the pork to the wok and stir-fry for 3-4 minutes or until cooked through. Set aside in a large heatproof bowl. Repeat with the remaining pork, adding a little more of the oil to the wok if necessary. Transfer to the bowl, cover with foil to keep warm and set aside. Reserve any remaining marinade.

Combine the cucumber and spring onion and stir through the pork mixture. Divide the pork and vegetable mixture among four plates or bowls and scatter with the fine-spice almonds. Serve the cauliflower ‘rice’ to the side.

Getting hungry? You can purchase the CSIRO Low-Carb Diet Book here.

Previous post:
Death metal: how nickel played a role in the world’s worst mass extinction
Coming up next:
Exploration: Towards building an accurate picture of the deep earth