Death metal: how nickel played a role in the world’s worst mass extinction

Death metal: how nickel played a role in the world’s worst mass extinction

The Norilsk nickel deposits in Russia are unique: giant volcanic eruptions 250 million years ago released colossal amounts of nickel into the atmosphere, kickstarting the Great Dying.

The Russian town of Norilsk contains the worldâ€™s most valuable source of mined nickel. Norilsk mine and town, 2014., Author provided.

The Russian town of Norilsk contains the world’s most valuable source of mined nickel. Norilsk mine and town, 2014., Author provided.

Around 250 million years ago, life on Earth nearly came to an end, in a mass extinction between the Permian and Triassic periods known as the Great Dying. Some 90% of the species in the oceans and 70% of vertebrate families on land were killed, and the great marine life experiment of the Palaeozoic era was brought to a halt.

What does this have to do with nickel? Well, as part of my recent work as a mining geologist, which involves studying the world’s most valuable nickel ore deposits in Siberia, I uncovered evidence of a link between ore genesis – how the nickel got there – and the onset of the Great Dying. These results were recently published in the Proceedings of the National Academy of Sciences.

It was an exceedingly strange world 250 million years ago, and finding the culprits for the world’s worst mass extinction is like putting together a puzzle.

This catastrophic episode was triggered by several different events, which in turn killed the world’s species in different ways: declining oxygen levels in the ocean, massively rising temperatures, and a possible meteor impact.

One of these trigger events involved a major jolt to the carbon cycle, which had dramatic climate effects. Some scientists think the temperature of the upper level of the world’s oceans and rivers increased from 21℃ to 38℃ in the late Smithian era (250.7 million years ago).

This shift in the carbon cycle has been attributed to a major burst of activity of deep marine colonies of Archaea methanosarcina, relatives of bacteria. These colonies had acquired a new way of getting energy from their environment. In much the same way as human bodies get energy from food, producing carbon dioxide in the process, these organisms got energy from transforming organic carbon into methane.

The archaea colonies were normally limited by the amount of nickel in the oceans, but for some reason, 250 million years ago, nickel seems to have been in abundant supply compared with today.

At the same time as the Great Dying, in an area on Earth that we now call Siberia, an astronomical amount of lava generated in the guts of the Earth erupted over an area the size of Europe. This province is the host to the Norilsk ore deposits, the Earth’s most valuable source of mined nickel.

Scientists previously thought that nickel released into the atmosphere could explain the glut of marine nickel 250 million years ago. But how could nickel get into the air? This is where our work comes in.

Norilsk mine and town.

Norilsk mine and town.

Let’s take a step back: how do nickel ore deposits form from molten rock (or magma)? Magma rich in nickel needs to come all the way to shallow depths beneath volcanoes, where it becomes enriched with sulfur, and forms liquid sulfide droplets.

The volcanic plumbing system then acts as a smelter. The sulfide liquid droplets scrub the nickel out of the magma. Ore deposits form when the sulphide droplets finally sink and accumulate at the bottom of the magma under the volcanoes. The nickel never reaches the surface – making it hard to explain how so much nickel got into the atmosphere.

A previous paper by our group showed that when liquid sulfide droplets and gas bubbles form together in the same magma they have a strong tendency to stick together. So, if there is a gas present, sulfide droplets can rise to the top of the magma chambers, taking the metals with them.

In a big eruption, like the one that produced the Siberian lava, the pressure drops, and it’s like opening a bottle of champagne. A swarm of bubbles forms and floats to the top. The liquid sulfide droplets hitch a ride like baskets beneath hot air balloons.

We think that this “bubble riding” is how nickel got from the bottom of the Norilsk magma all the way to the surface and into volcanic gases and aerosols. 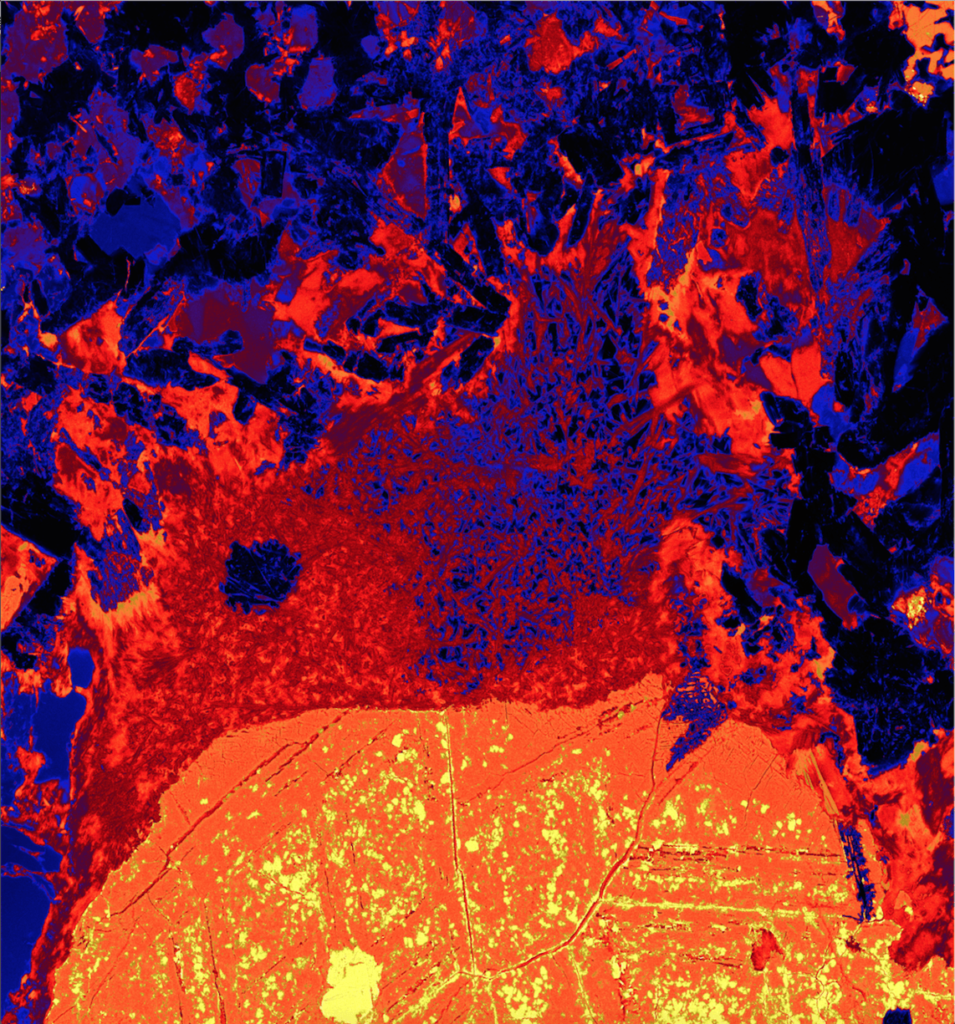 This x-ray image shows a sulfide blob and what remains of an attached gas bubble, frozen in ore. Iron concentration is represented from low to high by the colours black through to yellow/white. Data collected on the XFM beamline at the Australian Synchrotron, Victoria, Australia.

This x-ray image shows a sulfide blob and what remains of an attached gas bubble, frozen in ore. Iron concentration is represented from low to high by the colours black through to yellow/white. Data collected on the XFM beamline at the Australian Synchrotron, Victoria, Australia.

During our recent studies of the Norilsk nickel ores, we found the smoking gun: we used 2D and 3D X-ray imaging to show nickel-rich sulfide droplets physically attached to former gas bubbles, frozen in the ore.

We combined this observation with simple thermodynamic models to show that this transport mechanism greatly increases the amount of nickel content in volcanic aerosols.

The perils of methane

The Norilsk nickel deposits are unique. They are the only known place where nickel had a direct path to the atmosphere. Explosive eruptions helped to release colossal amounts of gas into the air.

During these massive gas episodes, our sulfide-carrying champagne bubbles transported large amount of nickel and tipped it into the atmosphere to feed the blooming archaea, playing an important role in the Great Dying.

The Norilsk ores formed in a freak event, but if the broader hypothesis is correct they hold a lesson for life on Earth: release large amounts of methane into the atmosphere at enormous peril.

Under normal circumstances, volcanic eruptions are a relatively minor source of methane in the atmosphere, but lethal time bombs exist in methane frozen into permafrost, much of it, coincidentally, to be found in the tundra wastelands covering the Siberian lava fields. Here, melting of the permafrost releases bubbles of methane into the atmosphere, creating a climate changing feedback loop – to potentially devastating effect.

Margaux Le Vaillant would like to acknowledge the contribution of Steve Barnes, James Mungall and Emma Mungall.

Previous post:
Beefing up our prawns
Coming up next:
Low-Carb Cook Ups