We’re kneading our way to bread that lowers cholesterol

We’re kneading our way to bread that lowers cholesterol 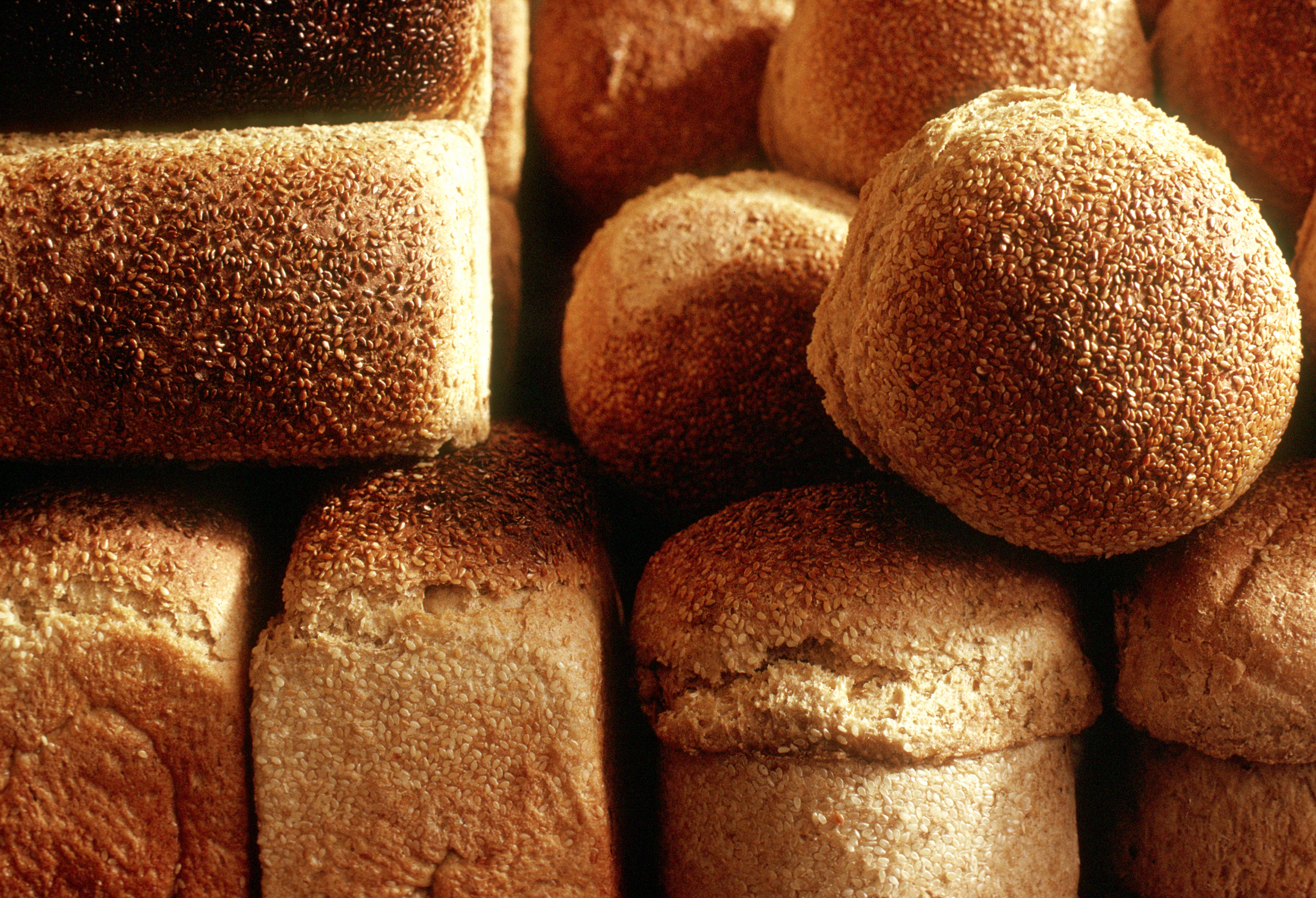 That’s how we (bread) roll: a cholesterol absorbing bread could have incredible health benefits for the community.

If we were to tell you that you could lower your cholesterol and your risk of heart disease – by eating bread, would you be up for it?

It sounds too good to be true, doesn’t it? But maybe it isn’t. We’re trying to make it possible using gene technology and plant breeding techniques to develop new superior wheat varieties.

Why is cholesterol such an issue? Cholesterol is an essential type of fat that is carried in the blood. It’s vital to healthy cell function and hormone regulation, among other things, but too much of it in our bloodstream can be a bad thing – damaging our arteries and leading to heart disease. In fact, the World Health Organisation has estimated that raised cholesterol is estimated to cause 2.6 million deaths annually.

It’s no wonder our scientists have been researching foods to help lower the prevalence of cholesterol related illnesses in the community. And it looks like we’re on to something.

We know that barley and oat grains contain high levels of a soluble fibre called betaglucan (1-3 ,1-4 betaglucan), which can reduce cholesterol reabsorption in the gut. This leads to healthier blood cholesterol levels, lowering the risk of heart disease. Unfortunately, wheat (which is one of the most commonly consumed grains in the world) has low levels of betaglucan and it has a slightly different structure to the oat and barley betaglucan, which makes it insoluble. 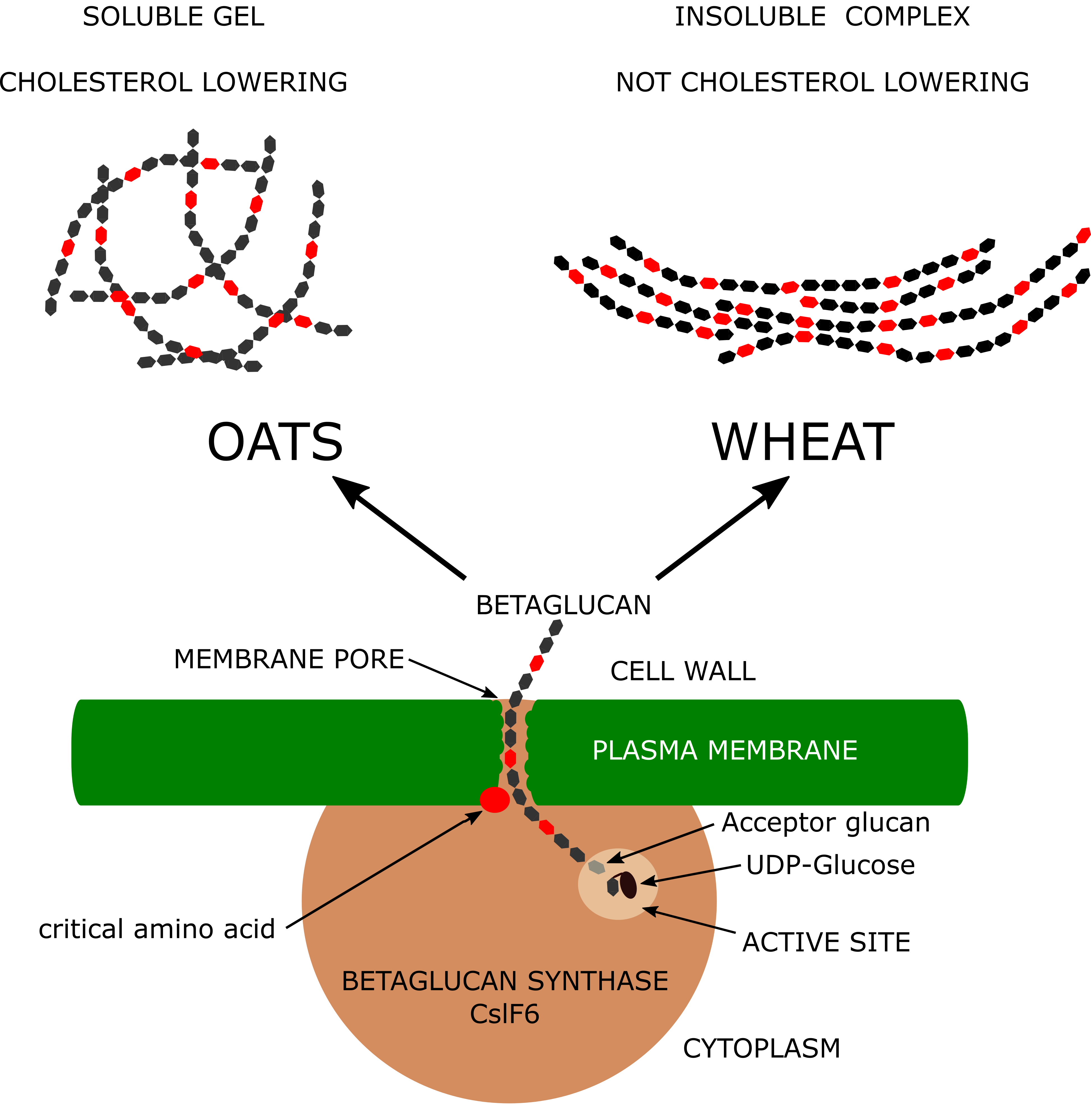 Betaglucan is made by an enzyme that sits in the membrane at the surface of the plant cell. This enzyme links activated glucose sugars from within the cell and pushes the growing betaglucan polymer chain through a pore in the membrane into the cell wall surrounding the cell. Click on the image for an animated version of the diagram, by Lisa Jobling.

So at the moment, it’s not possible to get cholesterol-lowering benefits from breads unless they have added barley or oat flour. This affects the taste and texture of the bread, which is why people generally prefer bread that’s made wholly from wheat flour. What we want is a bread that maximises the health benefits without sacrificing the flavour and texture that consumers want.

We now know why betaglucan in barley and oats is soluble but in wheat it’s not – and it’s to do with tiny differences between the enzymes that work in barley and oats compared with the one working in wheat to create the betaglucan. In ground breaking research just published, we’ve discovered that just one amino acid (the building blocks of enzymes) difference in the enzyme that forms betaglucan can change the structure and make it more soluble. By changing that one amino acid in the wheat enzyme we should be able to make wheat with more soluble betaglucan and cholesterol lowering properties. 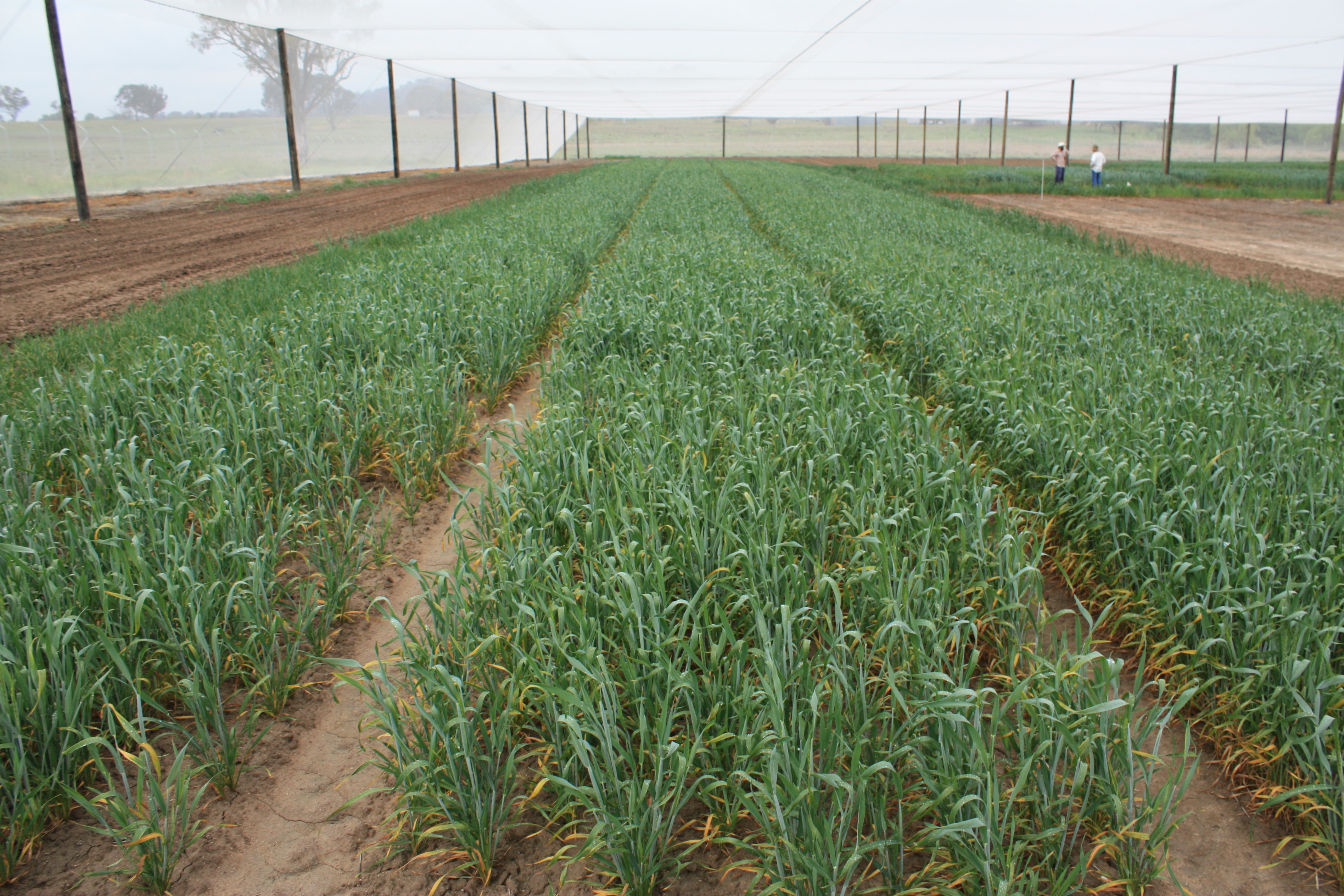 The controlled wheat trial: This is where we are testing how the modified wheat grows.

In a proof of principle experiment, we used gene technology to take the gene that makes betaglucan in oats and expressed it in wheat grain. This showed we can simultaneously increase the amount of betaglucan and change its structure making it as soluble as barley betaglucan. We did this in trials using genetically modified plants, a great tool to gain knowledge. We’re using them as a small-scale means to test what’s possible and understand exactly what we need to look for when we get to the next stage which doesn’t involve genetic modification.

The trial wheat plants were grown in a controlled field trial (approved by the Office of the Gene Technology Regulator) to get enough grain to evaluate the suitability for bread-making and potential health benefits such as lowering the level of cholesterol reabsorption. If this is successful, we plan to use conventional breeding techniques to develop a wheat for public consumption. This is more difficult and will take a while longer but we think it’s possible.

If you’d like to know more about this research and the technical bits check out our webpage or be daring and go straight to the research on Science Advances.