Vegan food’s sustainability claims need to give the full picture

Vegan food’s sustainability claims need to give the full picture

We don't know enough about the carbon footprint of vegan foods, and that needs to change.

Are veggie burgers the way of the future? Credit: Ella Olsson/Flickr, CC BY-SA

Sustainable farming is a major focus of the report, as plants and soil can potentially hold huge amounts of carbon. But it’s incredibly difficult as a consumer to work out the overall footprint of individual products, because they don’t take these considerations into account.

Two vegan brands have published reports on the environmental footprint of their burgers. Impossible Foods claims its burger requires 87% less water and 96% less land, and produces 89% fewer greenhouse-gas emissions than a beef version. Additionally, it would contribute 92% less aquatic pollutants.

But these results have focused on areas where vegan products perform well, and do not account for soil carbon or potential deforestation. This might change the picture.

How do you measure an environmental footprint?

Vegan and vegetarian “meat alternatives” have become increasingly popular. Often in the form of burgers, the products are meant to emulate the taste, nutritional value, “mouthfeel” and even the cooking experience of a meat burger. The aim is to provide the consumer with products that are like meat in all respects except one: their environmental impact.

Impossible Foods and Beyond Meat have each published “life-cycle assessments” (LCA), which measure environmental aspects of products over the supply chain. As is clear from the figures quoted above, both claim their burgers use a fraction of the resources of traditional beef burgers.

These results sound impressive, but LCA results can be misleading when taken out of context. Looking at the underlying reports for Beyond Burger and Impossible Burger it becomes clear that statements such as “less water” and “less land” mean different things in practice.

There are significant differences between the two studies in the calculations of land and water use for the beef burger, and the final results are not expressed in the same units. This does not necessarily mean either of the studies is invalid, but it does mean the statements on the websites are simplified and don’t allow for clear interpretation.

Both studies justify their choice of indicators by saying they are the most common used in beef footprint studies. But are they the most relevant indicators for vegan burger production?

By making the comparison only for the environmental aspects most important for meat products, the results may look extra positive for the vegan alternatives, as other aspects might have shown a less favourable result. The results as presented may be true, but they are not the whole truth.

Importantly, the studies compare the results for the vegan burgers with a beef burger produced in the United States. To be precise, it is produced from cattle from average, conventional US production systems.

This is a valid choice, because this is the default burger meat in the US market. But results may be very different for other animals, for beef in other countries, or for unconventionally farmed beef. 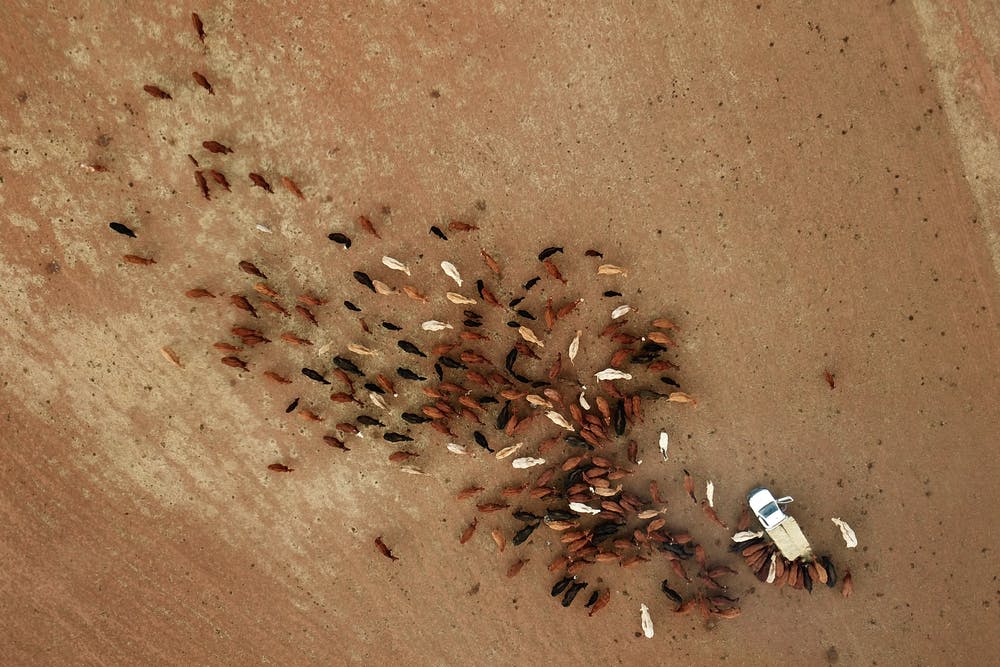 Vegan product assessments tend to focus on water and other things animals need, rather than metrics plants may score worse on, like deforestation. Credit: AAP Image/Dean Lewins

The White Oak farm sequesters so much carbon in its soil and vegetation it more than offsets the emissions of its cattle. In other words, it has a negative carbon footprint. This study compared White Oak beef favourably to conventional beef, chicken, pork and soy, as well as the Beyond Burger.

The silent assumption is, however, that no carbon sequestration occurs in conventional beef grazing or on feed and soy cropping land. This is not necessarily true. White Oak Pastures is using grazing to regenerate degraded cropland, so it is likely similar grazing on other farms would result in holding additional carbon within the first few decades.

In Australia, farmers who convert their cropland to pasture (which stores more carbon) are eligible for credits under the Emissions Reduction Fund. There is also evidence cropping systems may sometimes hold carbon as well, in the US as well as in Australia. For example, the carbon footprint of Australian barley and canola may be some 10% smaller when taking carbon sequestration in soils into account.

Clearly, soil carbon can play a major role in the net carbon footprint of many foods. How would the vegan burger versus beef burger comparison look if soil carbon and biodiversity aspects had been included?

That said, the White Oak Pastures study does not present the full story either, because soil carbon sequestration was only evaluated for their own product, and the study didn’t look at any other aspects such as water scarcity or biodiversity.

It is disappointing such prominent products don’t publish more comprehensive environmental results, given that this has long been prescribed by the international standards.

Now that the new special report stresses yet again how important soils are in a transition to sustainable agriculture and food, it’s time to do better.