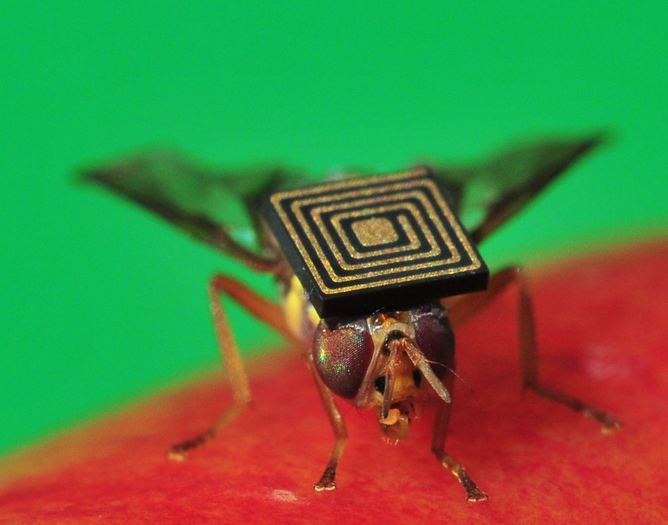 Queensland backpacker: a fruit fly fitted with a micro-sensor.

Queensland’s fruit and vegetable farmers are under pressure, having lost their main weapon against their main enemy – fruit flies.

Last year, the Australian Pesticides and Veterinary Medicines Authority banned the use of the pesticides dimethoate and fenthion, used by horticulturalists to keep Queensland fruit fly (also called Q-fly) at bay, after finding that these chemicals pose an unacceptable risk to human health.

Q-fly is the highest priority pest for a range of horticultural industries and can inflict considerable financial losses on producers, both through the money spent on pest management, and in lost production and exports. It affects citrus, orchard fruits, grapes and vegetables, industries that together are worth A$5.3 billion a year. Managing Q-fly costs an estimated A$26 million annually.

But the pesticide ban has opened up the opportunity to develop a more sophisticated – and benign – way to beat the Q-fly.

Bizarre as it might sound, flies wearing tiny radio-tracking backpacks could help by revealing the fruit flies’ movements – and by extension, the best places to release sterile males to reduce the population.

Figuring out where insects spend their time, how far they travel and what they are doing has traditionally been very difficult to do in real time. That makes it difficult to develop eradication strategies beyond blanket treatments over wide areas.

But the new micro-tracking technique, known as “swarm sensing”, can reveal this information in unprecedented detail.

As part of a current CSIRO project, we are fitting tiny micro-sensors to 5000 bees in Tasmania, as part of a world-first research program to monitor their movements and their environment.

The ultimate aim is to improve honeybee pollination and productivity on farms, as well as help us monitor for any biosecurity threats, including Colony Collapse Disorder, a global phenomenon where worker bees from a beehive or colony abruptly disappear or die.

The sensors are tiny radio frequency identification sensors that work in a similar way to a vehicle’s e-tag, recording when the insect passes a particular checkpoint. The information is then sent remotely to a central location and we can build a comprehensive three-dimensional model and visualise how the insects move through their landscape.

The sensors are 2.5mm x 2.5mm in size and weigh about 5 milligrams each. A new generation as small as 1.5mm x 1.5mm is being designed; less is more, as smaller sensors will interfere less with the flies’ behaviour. 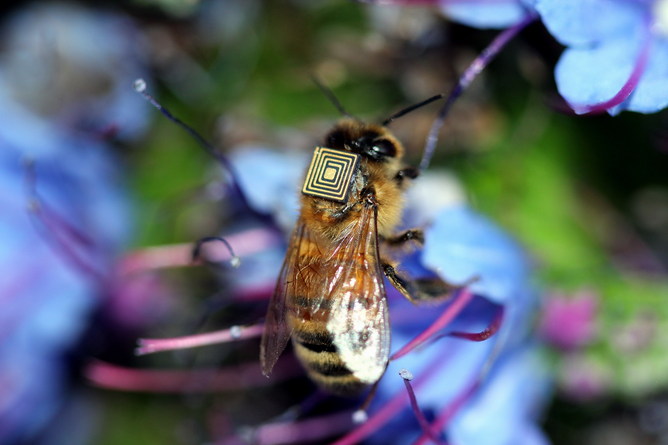 Micro-sensing backpacks are being fitted to 5000 Tasmanian bees.

Honeybees are perfect as a starting point for our research, as they are social insects that return to the same point and operate on a very predictable schedule. Any change in their behaviour indicates a change in their environment.

So when we model their movements, we will be able to recognise very quickly when their activity shows variation and identify the cause. This will help us understand how to maximise their productivity, as well as monitor for any biosecurity threats.

Meanwhile, back in Queensland, instead of studying an insect that is vital to our food supply, we are faced with one that threatens it. So we are bringing the same technology to bear on the problem of Q-fly.

Our sensor technology will be used in combination with our sterile insect technology (SIT) research, where we are working with government and industry to develop a male-only line of sterile Q-fly.

We believe that our SIT offers an environmentally-friendly, sustainable and cost-effective approach to controlling this noxious pest.

SIT is a scientifically proven method for suppressing or eradicating fruit fly populations and managing their potential impacts in horticulture production areas. It has already been used with great success around the world and in South Australia to combat the Mediterranean fruit fly. However, the development of male-only sterile Q-fly will be a world first. 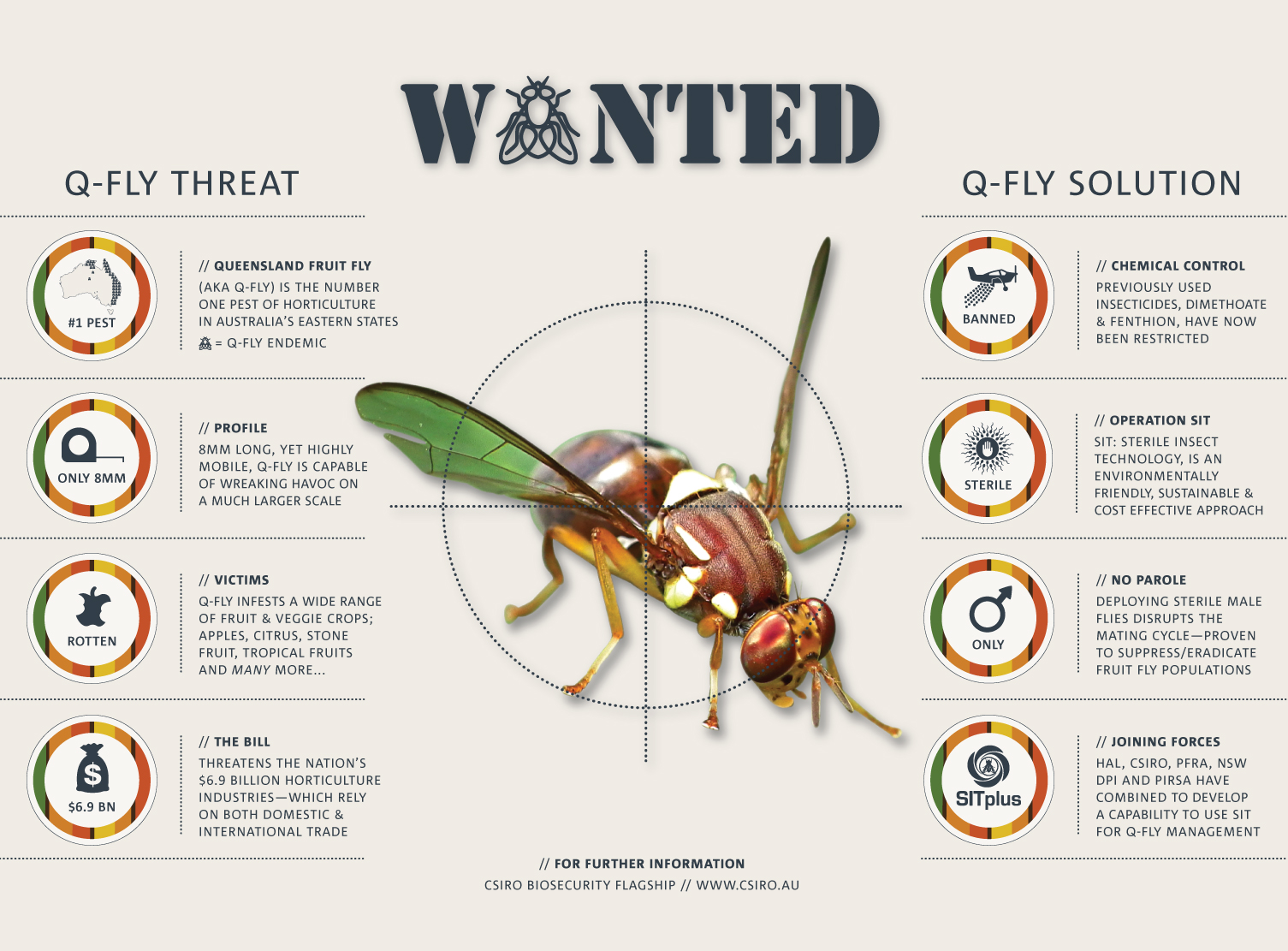 Our sterile insect technology could be the key to eradicating the Q-fly. Click to view full size.

Despite all our knowledge of fruit flies, we do not actually know where they go to reproduce. When you are looking to deploy sterile male flies to disrupt the mating cycle, this information is a critical piece of the puzzle.

By releasing fruit flies with “backpacks” that can track their movements, we will be able to answer that question, which will assist us in targeting where to release the sterile Q-fly males. We will also find out how to better deploy traps and baits, so that we can improve their effectiveness, while reducing the costs of management.

This will also help farmers in currently pest-free areas to protect their produce. While these areas have not needed to use treatments before sending their fruit and vegetables to interstate or international markets, they face increasing risk as Q-fly incursions are happening more frequently, threatening the ability to maintain pest-free zones.

The next generation of sensors will generate power from insect movement, store the energy in batteries being developed at CSIRO and will have some tracking capability to follow their movement in real-time. Among other things, we also want to understand insect behaviour under different weather conditions.

That would truly represent a game-changing opportunity, allowing us to track and record thousands of insects in their natural habitats, in relatively remote areas.

Queensland is no stranger to swarms of backpackers – but this time, it’s a little more high-tech.

Previous post:
Deep Space Romance
Coming up next:
More things to check off!