To ease you into the working week, today we bring you an unique story of deep love and deep space from our Canberra Deep Space Communication Complex.

When we heard that the granddaughter of one of our colleagues had her heart set on getting married in front of the Deep Space antennas at CDSCC, we just had to find out more.

In 2013 one of my Granddaughters, Emma, and her partner Brad were looking for a wedding venue ‘with a difference’. They were keen to have a bush wedding but none of the normal places seemed suitable.

Perhaps it was Brad’s love of Sci-Fi – he owns a war games shop and Sci-Fi themes are high on the list – or perhaps it was that Emma wanted to follow in the footsteps of her Aunt Penny who met her husband Terry when they were on the same operations shift at Tidbinbilla, and were possibly the first team members there to marry. Or maybe even that her Grandfather (me!) worked at CDSCC for 15 years.

Whatever it was that inspired the idea – the couple decided that CDSCC would be an ideal place for their wedding. 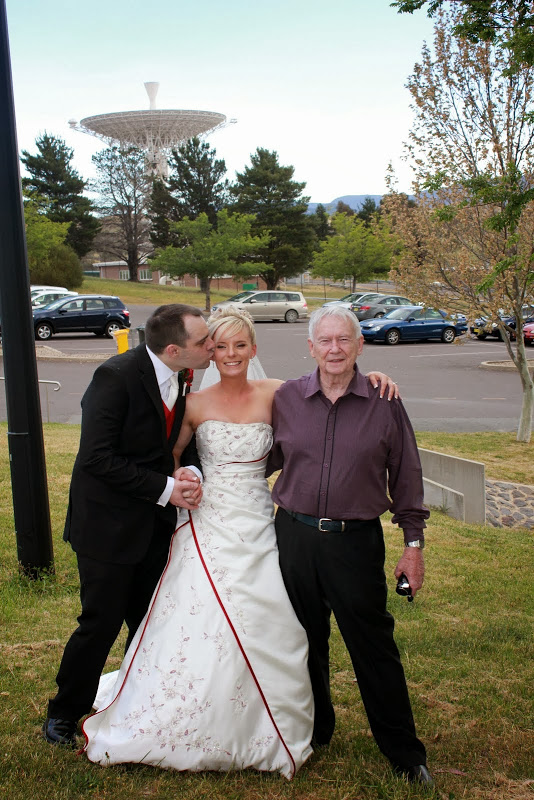 Brad and Emma with Grandfather John Saxon in front of the Honeysuckle antenna at CDSCC.

Now, Emma can be very determined when she sets her sights on something. So she approached Glen Nagle, then CDSCC Outreach Manager with the idea. In the end maybe Glen thought a wedding on the site would be a good method of Outreach, or maybe Emma just wore him down, and he eventually agreed to ask CDSCC Director Ed Kruzins if it might be possible.

Much to my delight Ed agreed, but no doubt with several provisos about the wedding not taking place inside the station proper or not causing any disruptions to Operations.

In November 2013, the marriage was celebrated outside the Visitor’s Centre, under the quadrapod and sub-reflector of the dismantled original DSS42 (34m diameter)  antenna. In keeping with the bush theme, the bridal party arrived in the back of a specially modified ute, and processed though a grove of trees to the celebration area.

Around 100 guests were present and everything went well.Later the reception was held at the nearby educational and function centre at Birrigai who provided a great meal with excellent service and a dance hall for the live band. Everyone enjoyed themselves! 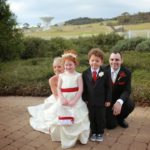 The happy couple with the youngest members of the wedding party, Bailey and Abbi. 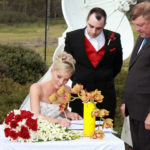 And it’s official – the signing of the marriage certificate.

No story of this nature would be complete without a huge vote of thanks to Ed Kruzins and Glen Nagle, who definitely went ‘above and beyond’ what was expected. Many thanks to all who contributed from CDSCC.

It was truly a one-off opportunity to celebrate in such a special way!

Previous post:
When disaster strikes: the science of oil spills
Coming up next:
Can backpacking flies rescue Queensland’s farmers?