What do Roman mythology and RV Investigator's voyage have in common? Hold onto your hard hats cause we're going to rock your world with marine geology. 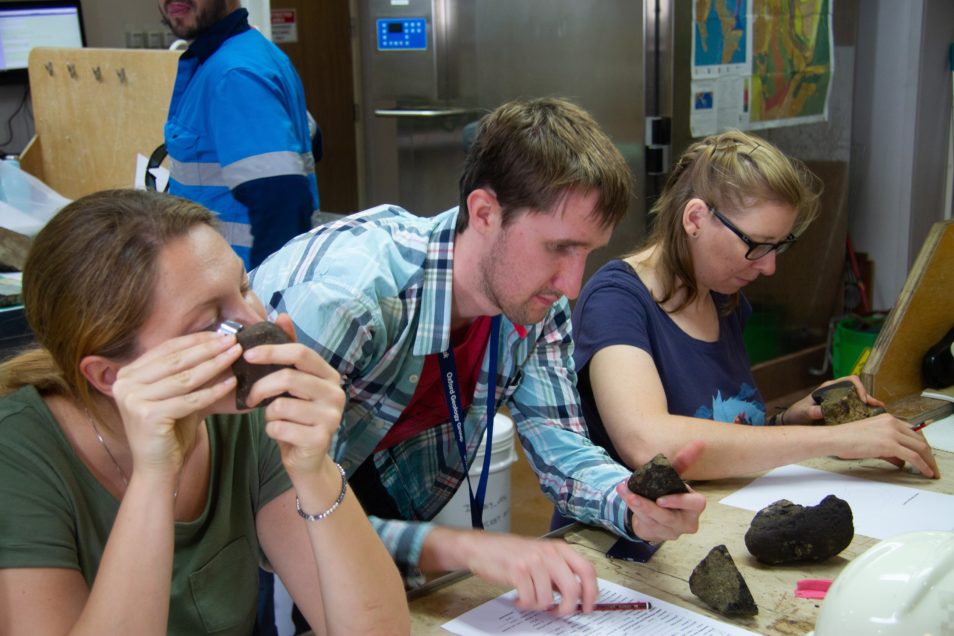 Titans of science! Geologists on board RV Investigator examine rock samples from the underworld.

Roman mythology is full of both epic love stories and epic battles. Take Pluto, the god of the underworld. His chief duty was to meet the newly dead after they rowed across the River Styx. He then bound these souls in chains and escorted them to judgement.

For times of trouble, Pluto had been gifted a helmet of invisibility and would ride into battle on an ebony chariot drawn by four black horses. 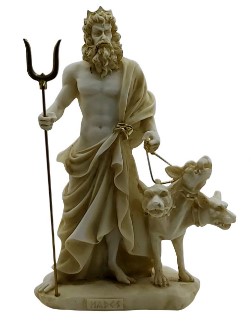 While a buff god of the underworld, Pluto’s pale complexion and unusual pet put the ladies off.

But the underworld wasn’t all bad. The Romans recognised that many good things came from under the earth – such as gold, silver, and their crops. So Pluto and his domain were not considered to be all that terrible.

Jump forward a few thousand years (stick with us on this one) and we find new gods of the underworld at the centre of our story – marine geologists. Instead of a helmet of invisibility and a chariot, our marine geologists have a rock dredge and a high-horsepower research vessel.

It’s an epic story of a different kind. One in which our rockstars uncover underwater rocks.

So, let’s look at what was dredged up on RV Investigator’s recent voyage to the Coral Sea.

In some locations on Earth, the underworld is much closer to the surface than others. In these places, hot molten rock rises as plumes from deep within the Earth’s mantle to create hotspots. These hotspots often create volcanic chains on the surface as tectonic plates move over them. Where this happens underwater, chains of seamounts – undersea volcanic mountains – can form across the seafloor.

Undersea volcanic activity has been critical in the evolution of the Coral Sea region. So, scientists on our RV Investigator set sail to study it in August 2019.

Scientists tested competing hypotheses for how hotspots had influenced the evolution of the Australian plate.

Associate Professor Jo Whittaker from the University of Tasmania led this team. They set about uncovering the story of the epic battles between tectonic plates as they jostled and fought like Titans on our planet’s surface. 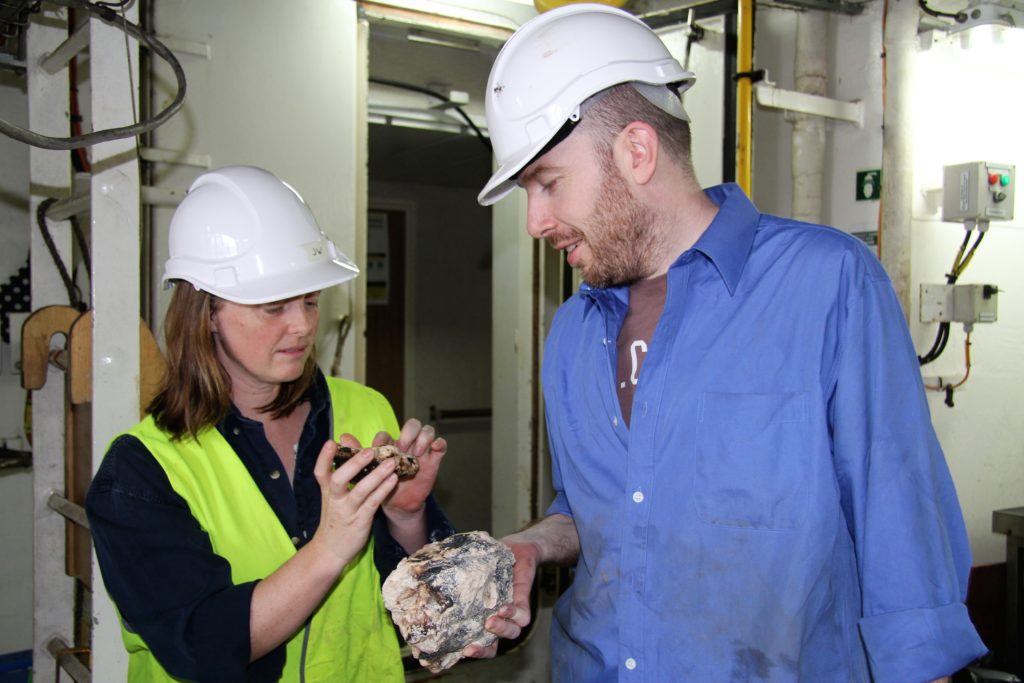 Two scientists in helments and hi-vis clothing looking at rocks.

A sudden feeling of dredge

Our story takes place at the site of Dredge 37. This location is a gateway to our underwater underworld, being the junction between the deep Pocklington Trough and the wide Louisiade Plateau near Papua New Guinea.

The Pocklington Trough is a trench 850 kilometers long and around 5200 meters deep. It marks a meeting of worlds between the northern margin of the Coral Sea and the southern margin of the Woodlark Basin and Papuan Peninsula. There is no evidence of the plate currently being dragged into the underworld (known as subduction). It’s actually thought to be a relict trench from where the Australian plate drove beneath Papua New Guinea. 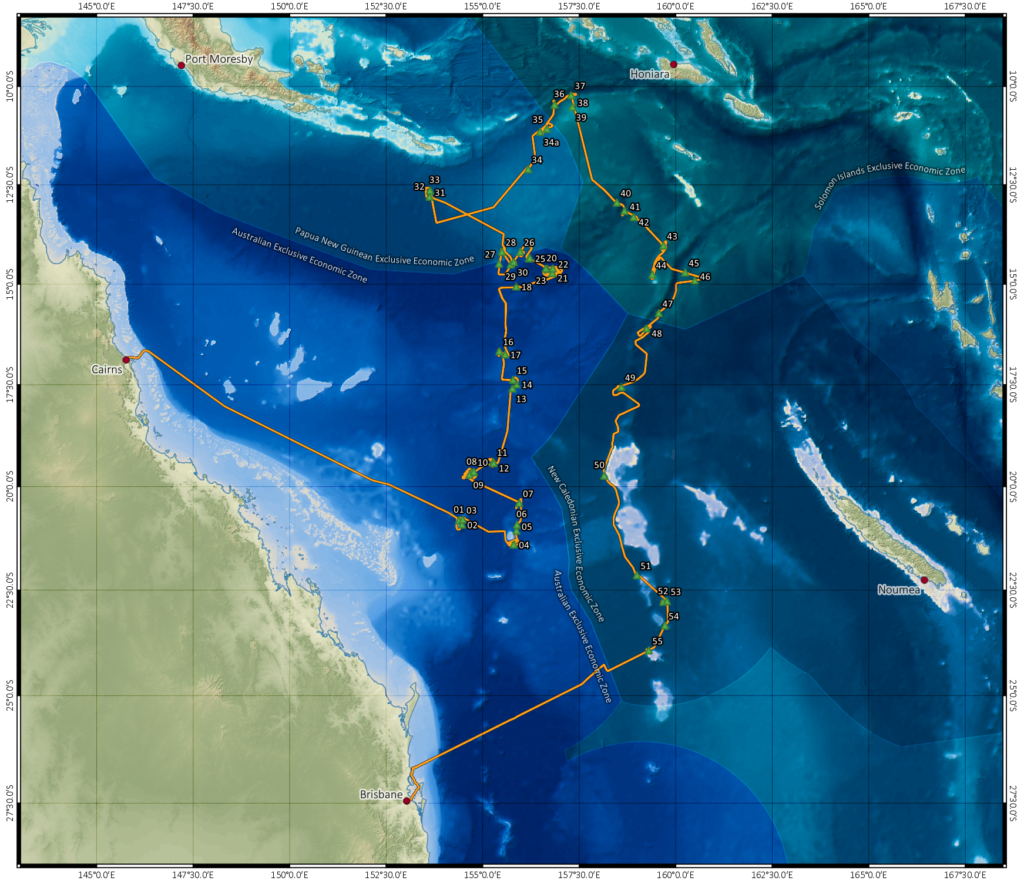 The location in the Coral Sea where the Investigator sailed.

Map to the underwater underworld studied during the voyage.

Our geologist’s chariot, RV Investigator, has advanced instruments for mapping and measuring the seafloor’s depth. These instruments work by emitting sound pulses through the water and recording the echoes from that signal. It allows scientists to calculate the water’s depth and interpret the seafloor’s structure.

Target sites for dredging are first mapped and then reviewed by scientists on board. When they find a suitable site for sampling rocks, the location is given to the bridge and deck crew standby to release the rock dredge. The vessel meanwhile is carefully manoeuvred into position to begin its dredge run.

The rock dredge is a simple but trusty tool. It’s got a chain net mounted to a sturdy steel mouth, filled with large triangular teeth. The dredge is lowered thousands of metres to the target site, where is it then crashed into the seafloor to bite chunks of seafloor rock to capture for the geologists above.

Dredge 37 yielded a bounty of rocks from the underworld. This is where our story starts to heat up. 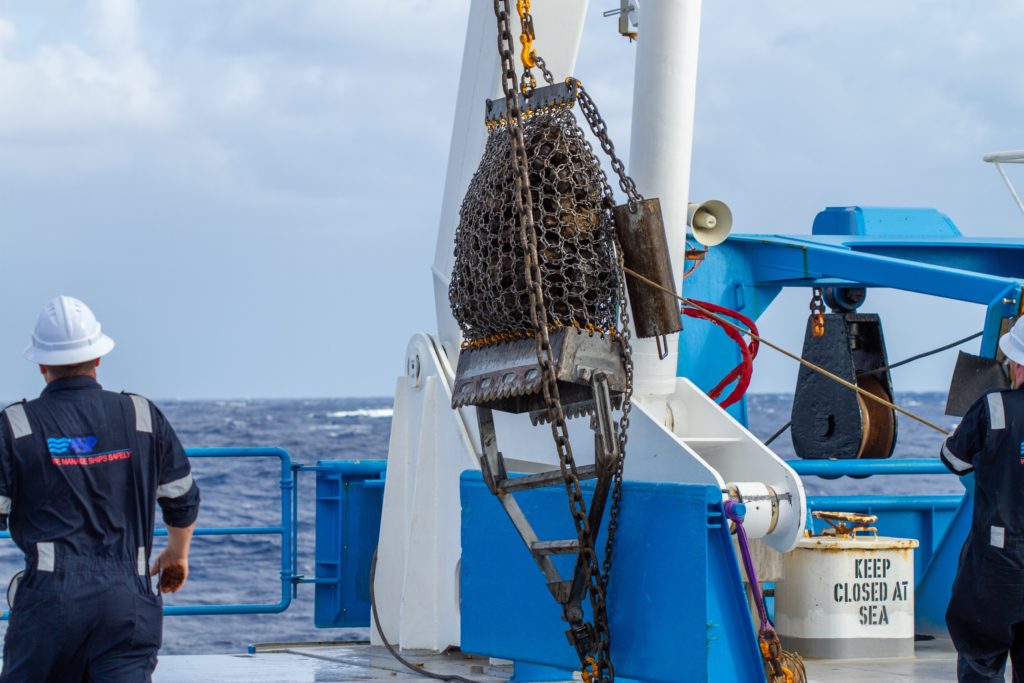 A dredge pulling up rocks from the water

Behold! The mighty rock dredge used to sample the underworld.

I like you but not in that way – igneous rocks

Our boy Pluto gives his name to plutonic rocks. They’re igneous rocks formed from molten rock deep in the Earth’s underworld. Don’t confuse them with platonic rocks though! They’re rocks that you have strong feelings for but not in a romantic way (your ‘friend zone’ rocks).

There wasn’t a lot of love for plutonic rocks on this voyage.  It was their extrusive cousins (molten rock that flowed and formed on the surface) which hold the secrets, history and formation of the Coral Sea region. Within the matrix of these extrusive rocks are minerals researchers can use to date the age of the seafloor. They do this using the Argon-Argon dating technique.

The most prized rock within a sample is basalt. A dredge containing fresh volcanic basalt is prize greater than diamonds or gold for our marine geologists!

Dredge 37 gave up some of this precious rock. The altered basalts collected indicated some fierce battles had taken place after they formed. Many of the basalts were fractured, with a variety of veins and infill, including calcite, zeolite, and quartz.

Other igneous rocks in the dredge showed the scars of similar underworld battles. Plutonic dolerite, which forms at great depths, was altered with infiltration by quartz veins. This is a possible sign of hydrothermal activity where hot fluids flow through the already formed rock. 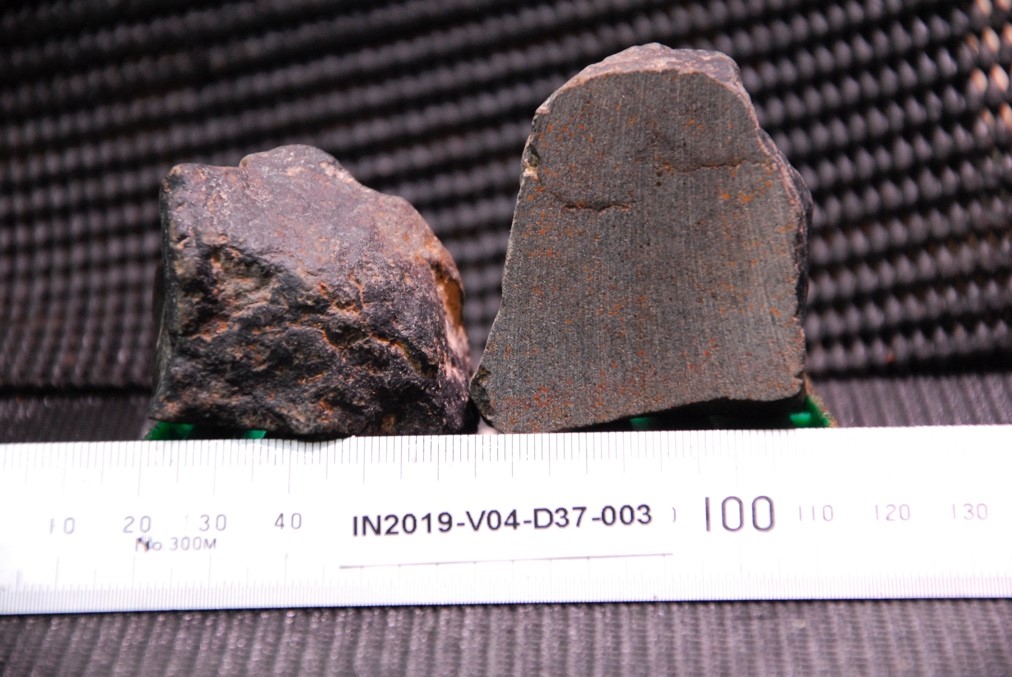 Basalt measured against a ruler

In contrast to the rocks formed in underworld fires, the dredge also brought forth rocks that formed during the slow settling of sediments and other materials. This included rudstone, carbonate mudstone and volcanic breccia. 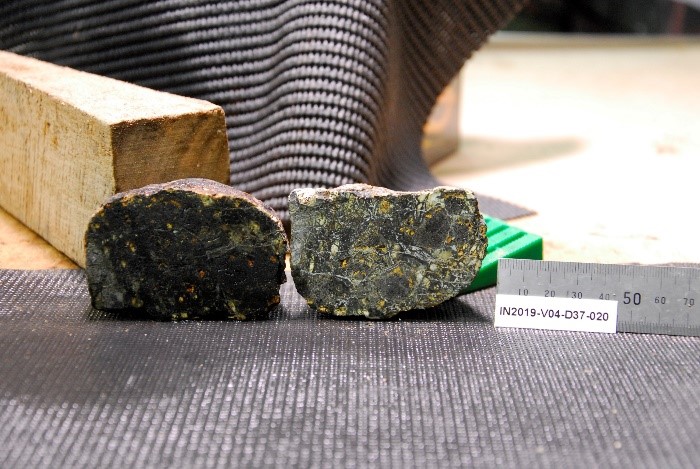 Image of breccia measured against a ruler.

The rudstone and carbonate mudstone were white and dark grey, indicating the presence of calcium carbonate. Rocks containing white calcium carbonate may point to a time the seafloor was above or closer to sea level, even though it may now be many kilometres below the surface today.

Breccia generally has a more violent origin. It’s made up of different rock fragments cemented together and can tell us about past volcanic eruptions. This provides context for the type of eruption that occurred. They’re either effusive with flowing lava, or explosive where lava and rock fragments were blasted up into the air and water.

Breccia samples from this location contained more than one rock type within them (termed polymictic volcanic breccias). These point to a mixing of sediments and materials from nearby volcanic eruptions.

Dredge 37 also recovered the beautiful serpentinite. Not to be confused with Pluto’s wife, the beautiful Proserpine, who he kidnapped and took to the underworld to live with him.

Serpentinite is a metamorphic rock. It forms when certain rocks (ultramafic for those playing at home) are altered in underwater environments near the Earth’s surface. Its formation can point to a battle between worlds, as grinding tectonic plates open fractures into the underworld, allowing fluids to penetrate and alter the dry rocks beneath. 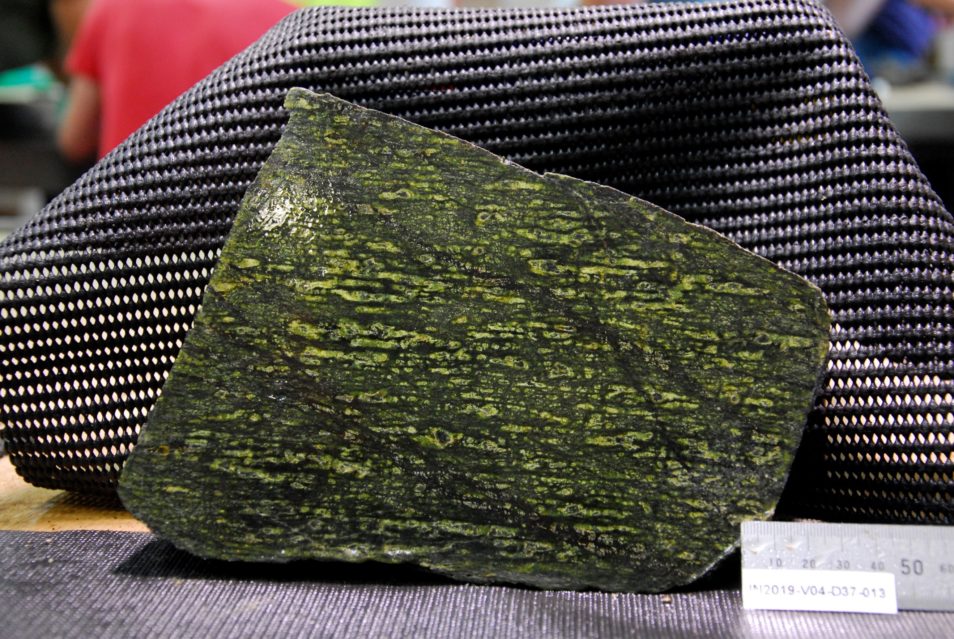 Sepentinite against a grey rug.

How will this all end?

The underworld is the source of many stories that both captured the imagination and guided the ancient Romans in their daily lives. The research on this voyage into our underwater underworld of the Coral Sea is no different.

It will increase our understanding of the age and evolution of the Coral Sea’s seafloor, and the chains of seamounts formed. It will also help define the extent of Australian continental crust in the Coral Sea – where one world ends and the next begins.

Scientists from all over the world will now work on these rocks, giving them the material to tell the story of our underworld, creating a new understanding of the battles that took place to form the surface of our planet – above and below the waves – in bygone eras.

Modern-day bards of the internet will tell the tale of this voyage for years to come!

Hear the tale of other underworld discoveries made by RV Investigator

Previous post:
Classic rock songs: Music you can rock out to
Coming up next:
Breakthrough in hunt for deadly cereal killer