We’ve brought in the dogs to sniff out one of the world’s most invasive pests. 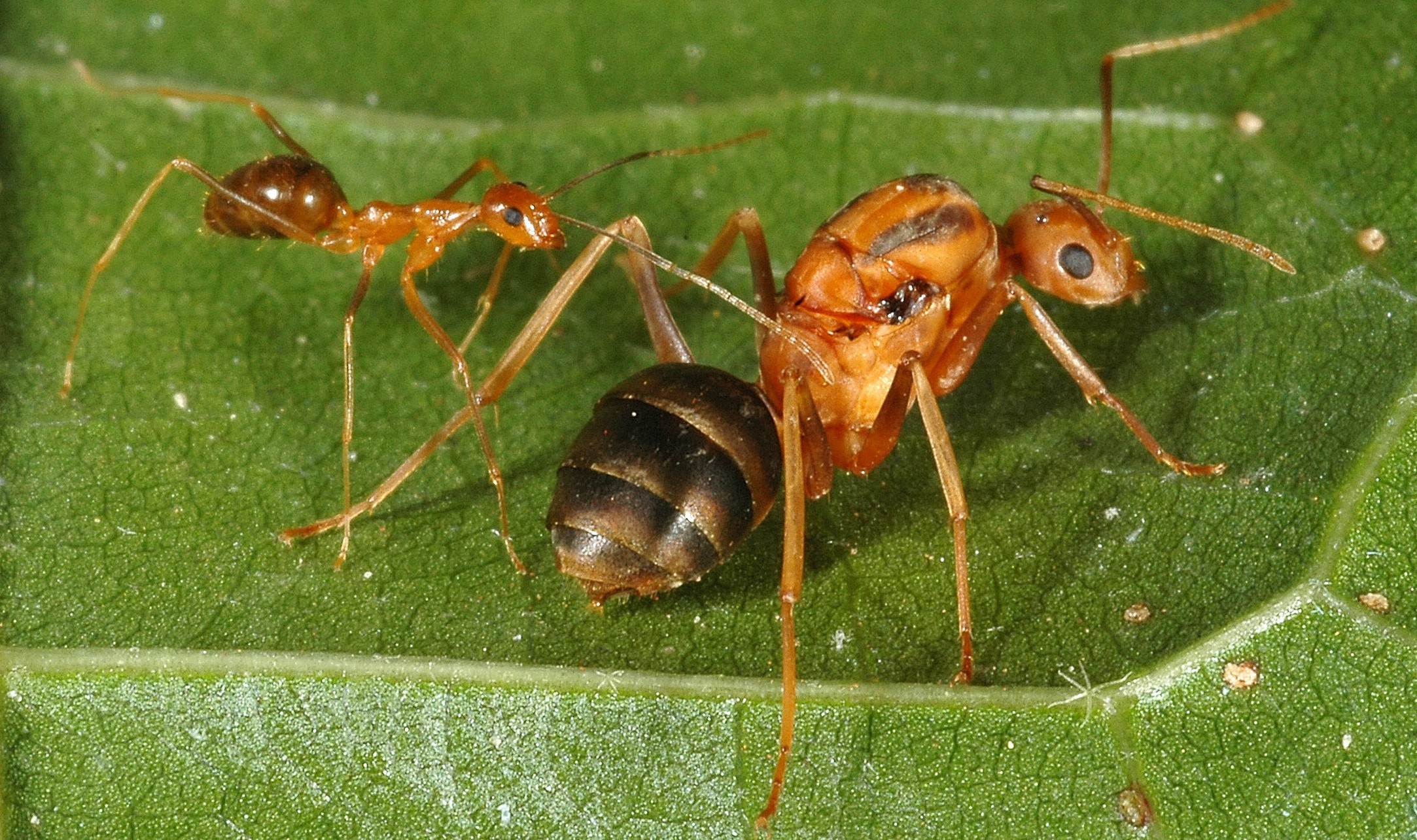 As if Australia didn’t have enough native creepy crawlies to contend with, our top-end is battling a big problem. And it’s with one of the world’s smallest but most invasive pests, the Yellow Crazy Ant. Invasive pests like these ants are Australia’s number one extinction threat.

The yellowish-brown coloured ants were first discovered making home in Australia in the early 1980s. They were spotted in Nhulunbuy in East Arnhem land. Since then, the Yellow Crazy Ant, or Anoplolepis gracilipes if you want to get formal, has been found in several eastern Australian locations including Cairns, Townsville, Brisbane and even Christmas Island.

But we’re stopping them dead with the help of some four-legged friends.

What’s so crazy about these ants?

Moving in an erratic and frantic manner, you need only disturb these ants to see how they got their name.

These ant armies are a rather destructive bunch and pose a major threat to Australia’s biodiversity. They wipe out native green tree ants and other invertebrate species and they’re also a threat to agricultural crops.

While they are aggressive in nature, they are quite social, gathering in large densely populated packs to create super colonies. These super colonies have been known to reach 20 million worker ants per hectare with thousands of queen ants to rule them.

For more than a decade, we’ve been on a mission to help eradicate these pests from the Northern Territory. The program has been highly successful to date, with the eradication of the ants from around 100 hectares of land.

But the job is as big as the ants are small. There were hundreds of hectares still to be assessed. And a huge mine site, covering about 10,000 hectares, still needed to be fully checked. So, it was determined that this job was too time-consuming and labour intensive for the human teams. We needed to call in some backup. 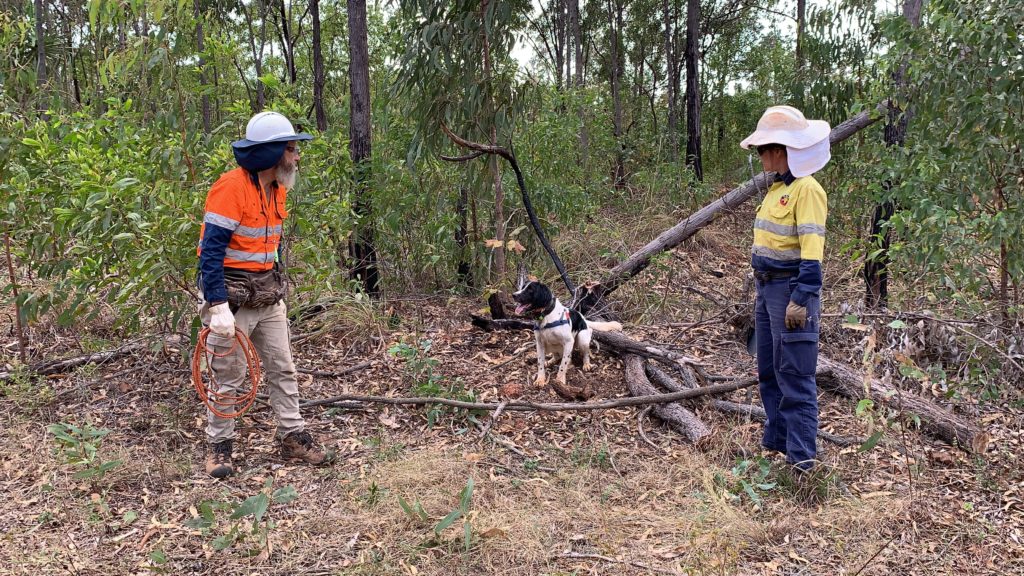 Don’t let his floppy ears and wagging tail fool you, Jet means business. With his eye on the prize and his bright red ball, Jet has already sniffed out over 300 hectares in two short months on the job.

Using his superior sight, hearing and sense of smell, Jet has been able to cover two hectares of ground a day. He’s running rings around the human teams who take around eight days to cover the same area. He is even sniffing out any nests that have survived the toxic treatments, or ants that were not originally found by people.

We all know dogs have a nose for finding even the most well-hidden things. That’s why the Australian Quarantine and Inspection Service and Police use them to find illicit items.

Around 10 years ago, Australia started to use detector dogs in ant eradication programs. This was specifically the detection of the Red Imported Fire Ant and Electric Ant in Queensland. Dogs are now an invaluable element of both programs. Off the back of these successful ant eradication programs, it seemed a natural fit that man’s best friend be trained and recruited to help with Yellow Crazy Ants. 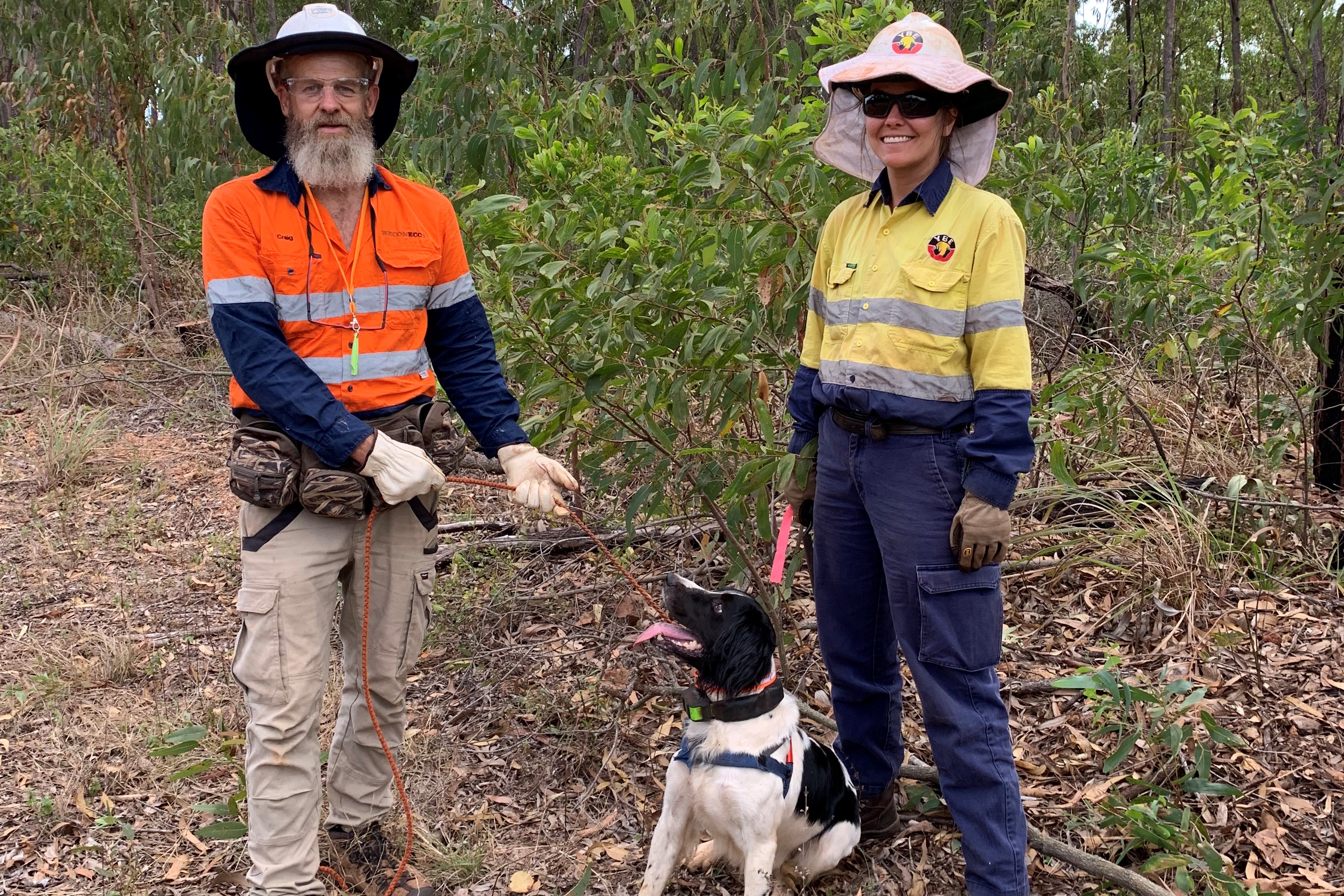 Prior to Jet joining the ant hunt, our project team trialled a range of ant treatment options which were deployed. The team saw varying degrees of success with these products and deployment methods. However, with Jet onboard, our scientists are closer to getting a definitive answer of the best ways to treat this pesky problem.

All in a day’s work for our poochie pal.

This research is being conducted with Rio Tinto and YBE (2) Pty Ltd.

We have ants in our pants about our invasive species research