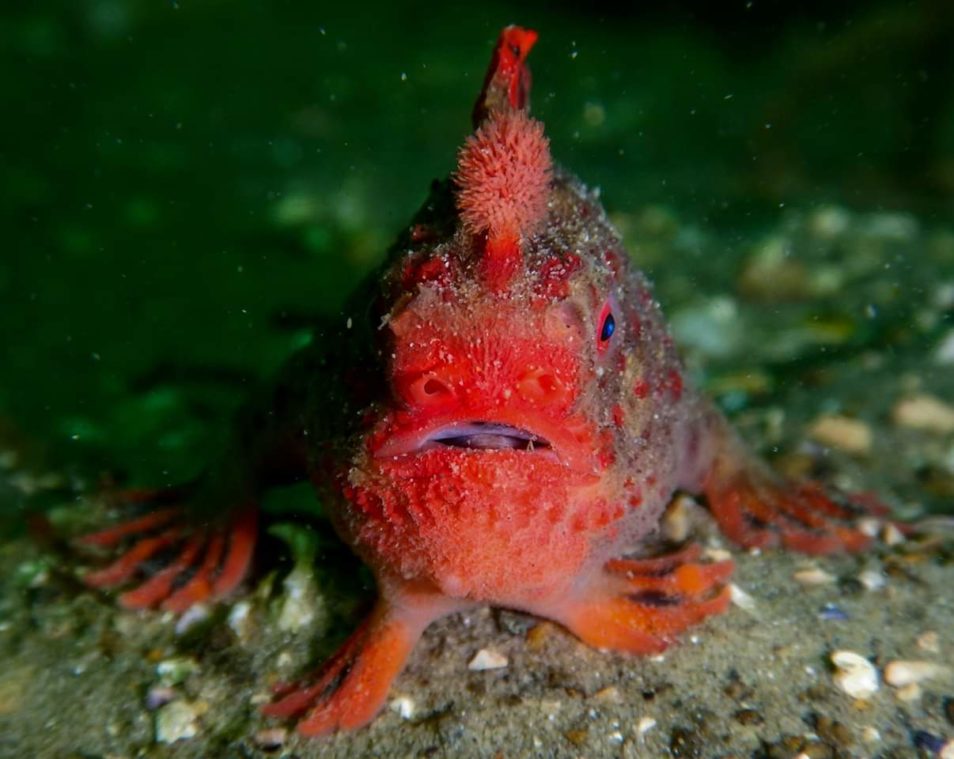 Do the handwalk: Handfish have hand-shaped fins that they use for walking rather than swimming. Credit: Alex Hormann

They only live in Tasmania. And there’s only around 100 left in the wild. But their babies are providing hope to scientists to help save the world’s rarest fish.

What’s this about babies?

There’s a new baby in the house. In fact, there’s 50 of them! We aren’t talking the human kind but newly born red handfish that recently hatched. Did you know that baby fish are also called ‘fry’? Cute!

These new fry have our scientists rejoicing.

Why are they so happy?

Because red handfish are on the brink of extinction. It’s estimated there’s only around 100 adults remaining in the wild in Tasmania. This development could aid their recovery.

Think that’s awesome? It certainly is. But it’s still nerve-wracking. This new influx of babies offers hope for conservation efforts, but more care is needed to provide the babies with the best chance of survival. And to help them grow up safely into juveniles.

Where did the babies come from?

The baby fish hatched in an Institute for Marine and Antarctic Studies (IMAS) aquarium at the University of Tasmania from two egg masses collected at one of the last remaining sites in southern Tasmania. They join 16 hatched last year at CSIRO who have been growing up at Seahorse World in Beauty Point, Tasmania. 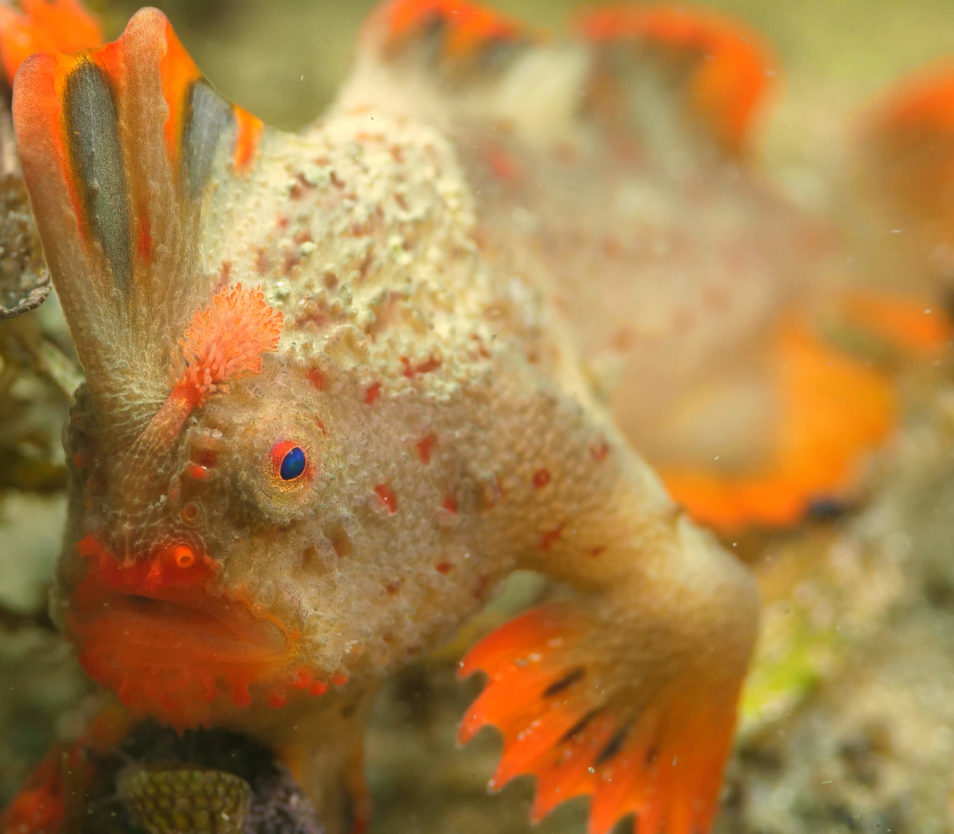 Eggtastic: 50 babies have hatched in captivity to assist recovery of the rarest fish in the world. Credit: Institute for Marine and Antarctic Studies

Red handfish, along with their fishy friends – the spotted and Ziebell’s handfish – have experienced significant habitat loss which has had a major impact on their numbers.

To make recovery even harder, once their eggs hatch, the juveniles hang around their spawning grounds so don’t often recolonise areas where they have disappeared from.

How does one care for a baby red handfish?

They need to be kept in a safe place during the vulnerable early stages to increase their chance of survival. We replicate the outside world as much as possible, without the exposure to predators and environmental risks.

How long will the handfish be kept at the aquarium?

Just like teenagers, they’ll want to leave home. We expect they will be released into their natural habitat at the age of one.

We’re glad you asked. Little is known about their biology, reproduction and early growth so we’ll be able to conduct critical research to ensure there’s more red handfish in the future.

So scientists are good at science and being handfish parents?

Yes. The researchers are trying to increase their chance of survival and their numbers. 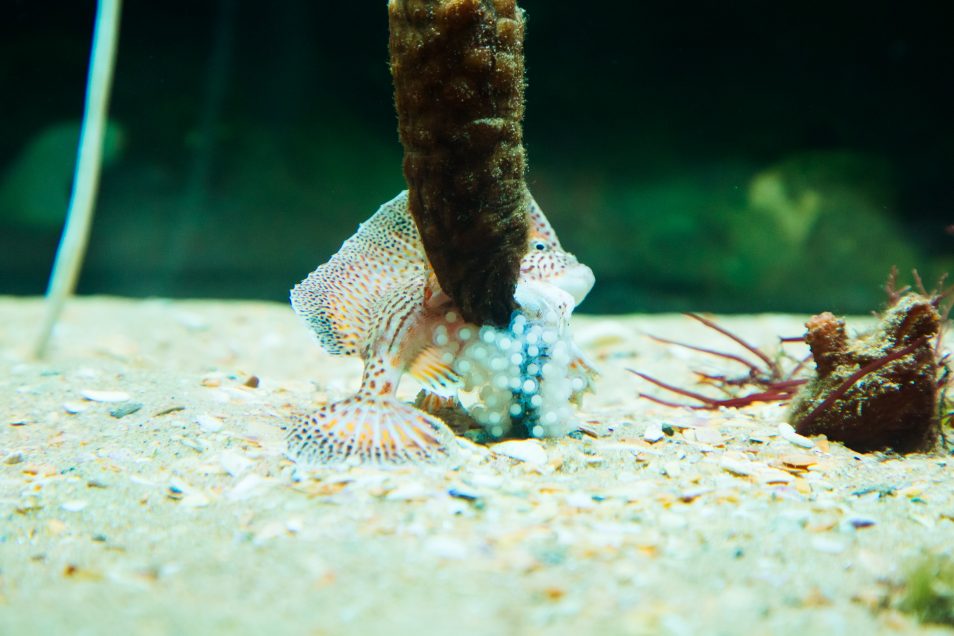 Handfish lay their egg on stalks, known as ascidians. We made some ceramic replicas as part of a successful captive breeding program.

What about their name?

Handfish are called this because they have fins in the shape of hands. And they don’t swim. They use their hand-like fins to walk on the seabed.

They are small too. On hatching, the babies are 3-4 millimetres in size. They would be almost impossible to find in the wild. Adults can grow up to 7 centimetres.

Unlike many fish species that lay their eggs and then carry on their merry way, handfish remain with their eggs until they hatch, which usually takes around 6 to 10 weeks.

What about their reproduction?

The fish certainly aren’t like rabbits when it comes to breeding! They require an upright stalk of vegetation on a rocky reef on which to attach their eggs. The conditions need to be just right, without threats from sea urchins and pollution. They’re a sensitive bunch.

What happens in a captive set-up?

This is the second group of red handfish that have hatched in captivity after a similar egg mass was collected last year.

For captive breeding of the spotted handfish we had photographs pinned to the tank glass, objects for the fish to hide behind, a programmable light system and artificial spawning habitats, so it felt just like home.

How else are we helping?

It’s science to the rescue… again! We teamed up with a local artist to make ceramic stalks for spotted handfish to lay eggs. Thankfully, they liked the idea with a pair of spotted handfish successfully breeding.

It sounds very novel. But it’s also simple and effective. The team even won a Design Tasmania Impact Award for this creative and beneficial solution.

Who are these clever scientists?

We’re part of the National Handfish Recovery Team that includes IMAS, the Department of the Environment and Energy (Commonwealth), Department of Primary Industries, Parks, Water and Environment (Tasmania) and the Derwent Estuary Program. Together we’re making good progress.

Want to see a handfish?

It’s your lucky day! You can see spotted and red handfish at Seahorse World near Launceston and spotted handfish at the Melbourne Aquarium. For red handfish, there’s also some great pics at the Handfish Conservation Project website.

Previous post:
Have yourself a sustainable little Christmas
Coming up next:
Our big breakthroughs in 2019