Queensland farmer Daniel Wegener is using a technique we developed called early sowing to make the best of the current drought.

Daniel Wegener is a cereal and legume farmer in Brigalow, Queensland four hours west of Brisbane. He reckons the current conditions are by far the toughest he’s seen in his 19 years of farming.

But, Daniel has adopted a farming practice we helped develop called early sowing. This is enabling his family’s 1600-hectare farm to continue growing and harvesting crops, even in the face of drought.

Early sowing is a practice where farmers use the soil moisture from summer rain before it evaporates.

“Changing what we’ve done over the last 20 or 30 years has continued to make us profitable,” Daniel said.

“In tough conditions you need to make the most of opportunities. And planting earlier than we traditionally would allowed us to double-crop a harvest of sorghum and barley.”

Without early sowing that second ‘double crop’ of barley wouldn’t have been possible to grow in the same year, while most farms only plant one crop. It wasn’t a bumper crop, but it still grossed Daniel an extra $465 a hectare. This is valuable cashflow for his farm.

However, Daniel doesn’t see himself as an early adopter. Before trying early sowing himself, years of evidence was being built to support the practice.

Our farming systems researcher Dr Lindsay Bell said we’re seeing a drop in long-term rainfall averages. And rainfall patterns aren’t as reliable as they once were – even when we’re not in drought.

“Our research has demonstrated the benefits of using stored moisture in the ground after summer rains,” Dr Bell said.

“Early sowing means farmers can plant a crop after modest rainfall of 20-30mm later in the year. This is an important opportunity to produce a crop in times of drought.”

Daniel laughed when asked if he sees himself as a water farmer, but agrees it’s an appropriate description.

“Capturing water and using it to the best of our abilities is what it’s all about,” he said.

Daniel’s farm has been drought declared for two years, with only 180mm of rain this year compared to the 350mm average. However, when he digs a few centimetres below the soil surface he soon reveals moist soil.

“Every gardener knows about the value of mulch, and groundcover is really on-farm mulch,” he said.

“It insulates the soil from above and helps the roots feed nutrients back into the soil biology as they breakdown. It also provides a path for any rainfall to infiltrate deeper into the soil.” 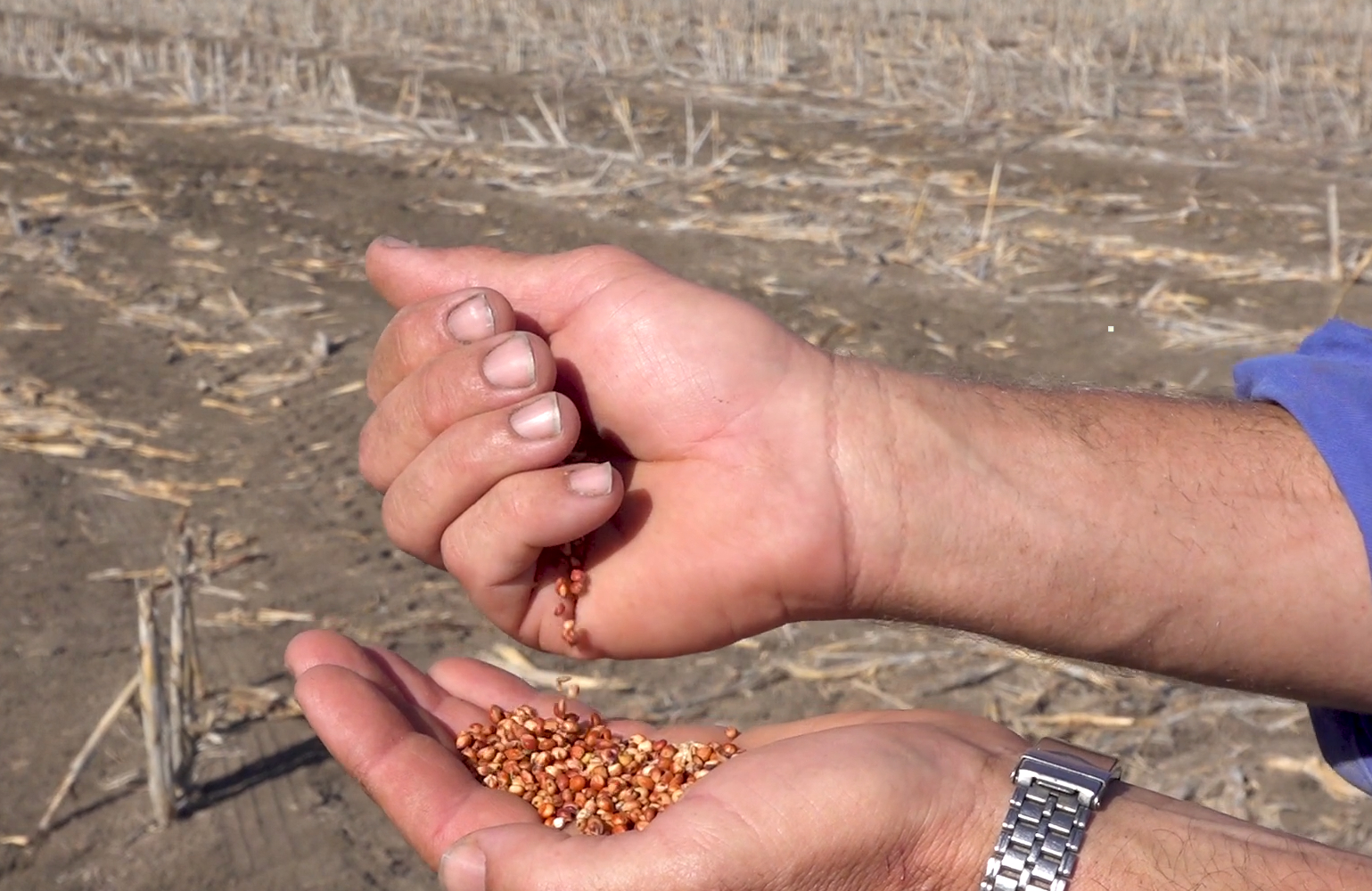 Despite drought the future is bright

Farmers need to be open to adopting new practices to stay ahead of changing growing conditions. Daniel said the value of many on-farm resources like groundcover were overlooked at best, or destroyed at worst.

“In decades past, crop stubble would have been burned-off or ploughed in. It was trash. Now retaining it is a vital part of our practices,” he said.

“You can’t keep doing what you were doing 20 or 30 years ago because there’s better ways of doing things. And you need to be open to trying them as they become available.”

With over 70 years of farming in his family’s history, Daniel is optimistic about their ability to continue by building drought resilience into their operations.

“The drought will break, even if it isn’t for a while. But there will continue to be challenges, and as long as we’re open to new ideas and innovations, we’ll continue to adapt.”

We’re continuing to research drought resilience in farming practices, risk management and digital agriculture. So, Daniel will have many new ideas to implement for years to come.

Find out more about how we’re building drought resilience.

Previous post:
A dry landscape and a dire season: we explain the current bushfire environment
Coming up next:
Pick of the litter: how much rubbish is there at Ningaloo Reef?