Mapping our oceans: running the machines that go ‘ping’

Mapping our oceans: running the machines that go ‘ping’

What goes ping and is mapping the seafloor? Matt Boyd takes us underwater with the discoveries found on RV Investigator with the machine that goes ping! 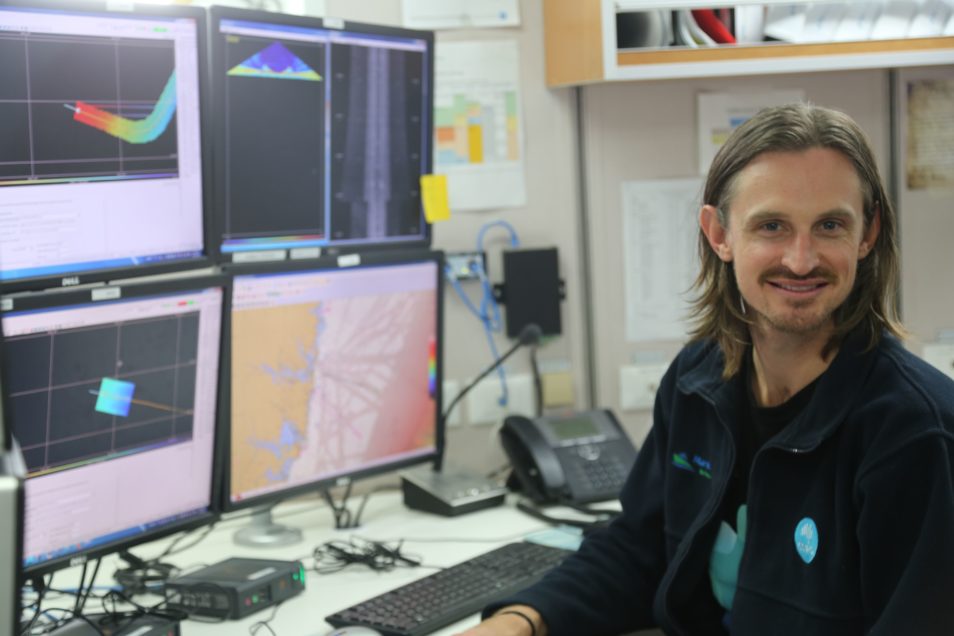 Matt Boyd is a hydrographic surveyor who has been on many research voyages with RV Investigator. He helps with mapping the seafloor.

The year is 2018. Matt Boyd is on board RV Investigator on a journey down the East Australian Current. He’s on a ship full of eager scientists, support staff, teachers, a camera crew and 20 of the ship’s crew. Little do they know what adventures and discoveries lie ahead!

There’s a lot of advanced equipment on board our research vessel (RV) Investigator. But one piece of equipment often surrounded by a crowd of excited onlookers is the machine that goes ‘ping’! It’s many people’s favourite.

Putting the ‘ping’ in mapping the seafloor

Researchers use the machine that goes ‘ping!’ for mapping the seafloor and its features.

On this particular voyage, researchers are using the machine to map the seafloor beneath the East Australian Current. And to hunt for shipwrecks!

The man who switches everything on and makes the machine go ‘ping’ is Matt. He’s a hydrographic surveyor from our Oceans and Atmosphere team. Matt works with the scientists to support the research on RV Investigator and interpret the data from the machine that goes ‘ping’. He actually looks after three machines that go ‘ping’ on board. Each of which has a slightly different purpose and ‘ping’. 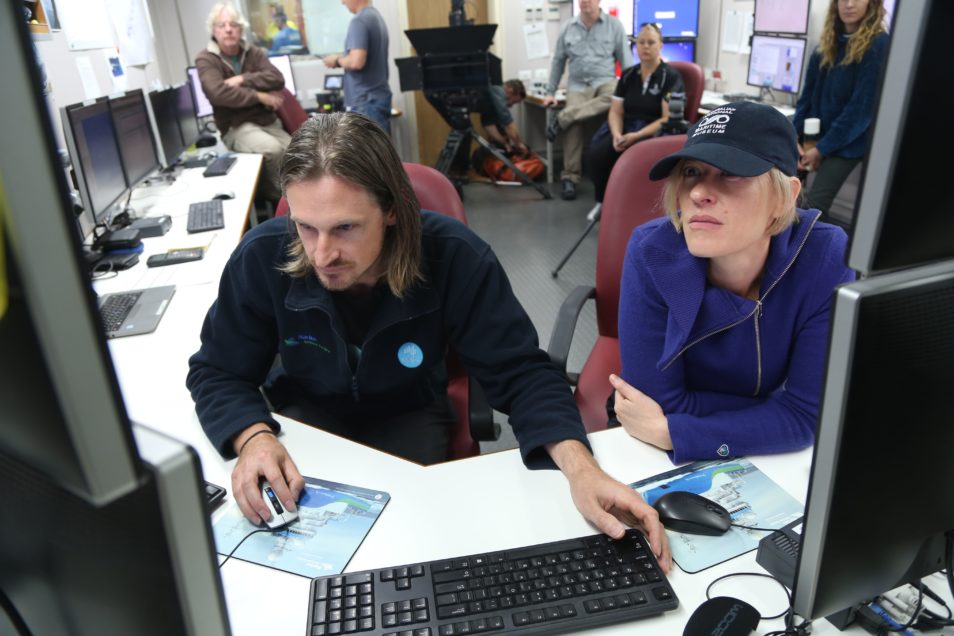 The ‘ping’ the machines produce – which are also known as multibeam echosounders (MBES), a type of sonar – is a sound wave. The sound wave is emitted from a gondola (large wing-shaped structure) mounted beneath the ship’s hull. It travels through the water to the seafloor below, where it bounces and then returns to the ship. Basically, the machine creates echoes. Scientists record the time taken for this echo to return to the ship and figure out the speed of sound in the seawater. Both allow the depth of the ocean to be accurately determined.

On RV Investigator, the machines that go ‘ping’ don’t just put out one beam of sound though. They can pump out hundreds of ‘pings’ at once. This allows the ship to map a ribbon of seafloor called a ‘swath’ every time. These beams can map a swath up to six times the ocean depth with widths up to a massive 30 kilometres in a single pass of the ship when in the deepest water.

Collecting multiple ‘pings’ provides a 3D picture of the seafloor. They show features like canyons, seafloor mountains (called seamounts), valleys and abyssal plains. All many thousands of metres below the ocean surface. These seafloor features can have a big impact on the movement of water in the East Australian Current. For example, features such as seamounts can force deep ocean water towards to surface. As a result, it creates ‘upwellings’ of nutrients to create a bloom of life in the sea above. 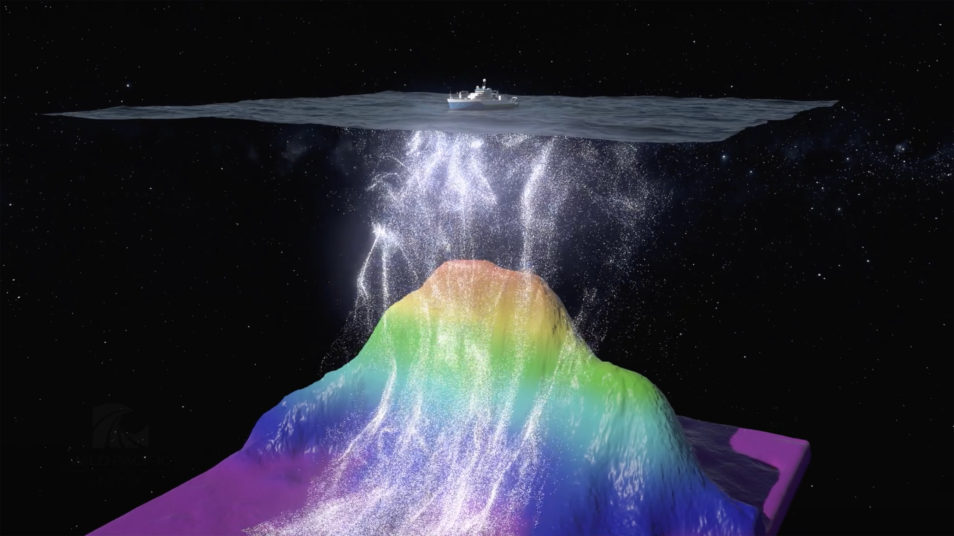 The three machines that go ‘ping’ on RV Investigator operate on slightly different frequencies. They’re designed to produce seafloor maps in different depths of the ocean. Between them, they can create high-quality maps from anywhere in Australia’s vast marine environment. Two of these machines are always on board, while the third joins the party when mapping in shallow water.

Only a small percentage of Australia’s vast marine environment has been mapped in detail. This means the advanced equipment on RV Investigator has plenty of opportunities to make interesting discoveries every time the ship puts out to sea.

On this particular voyage, Matt is working with a maritime archaeologist from the Australian National Maritime Museum to look for shipwrecks off the NSW coast. Two previously identified shipwrecks were mapped during the voyage. But it’s a shipwreck discovery made the year before that creates excitement when it’s finally announced to the world during this voyage.

And it was Matt who helped make the discovery. 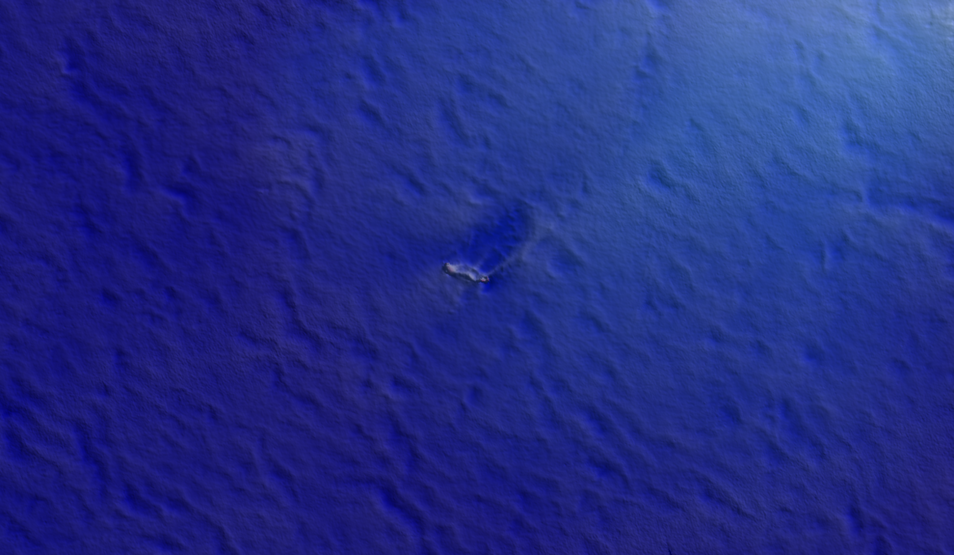 Ping! Can you spot it? This blip is sailing vessel Carlisle, a 60m shipwreck lying on the sandy seafloor of Bass Strait. 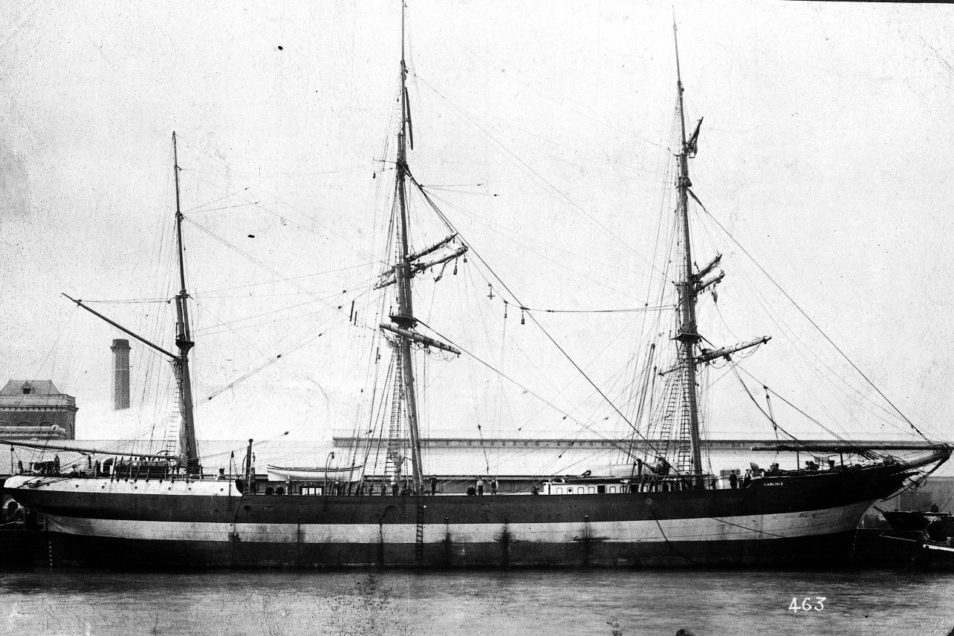 Sailing vessel Carlisle, which was wrecked in 1890 and found in 2017 by RV Investigator. Image: Heritage Victoria

The ‘blip’ that was Carlisle

While doing a routine mapping survey in Bass Strait in 2017, Matt and the team chanced upon an unusual reading from the seafloor. It’s called by those in the know as a ‘blip’.

On closer investigation, the ‘blip’ looked a lot like a ship. So the team onboard deployed a drop camera to take a closer look. The images captured, along with the dimensions of the vessel from the mapping, confirmed it as a previously unidentified shipwreck in Bass Strait.

Volunteers from the Maritime Archaeological Association of Victoria later visited the site. They identified the vessel as the barque Carlisle, which was lost at sea in 1890. It was a 26-year old collier (coal transport ship) which had departed Melbourne bound for Newcastle. It sank after hitting an uncharted rock but luckily all members of the crew escaped into life rafts.

Coincidentally, improving charts for shipping was the reason RV Investigator was in the area doing mapping in the first place. This work is important to improve charting for navigation – both surface and subsurface. But it’s often gruelling work. So, it is termed ‘mowing the lawn’ because the ship sails lines back and forth over the ocean like a floating lawnmower!

Matt says seafloor surveys can be monotonous at times. But you never know what you might stumble across with a machine that goes ‘ping’!

See more of the discoveries of Matt and his machines that go ‘ping’ on the stunning new three-part series ‘Australia’s Ocean Odyssey’ which starts on ABC TV and ABC iview tonight (Tuesday 9 June) at 8:30pm.