Our team at the Ningaloo reef have been busy this past year, tagging 60 animals and surveying 7 kilometres of reef, and 12,000 hectares of deep habitat! 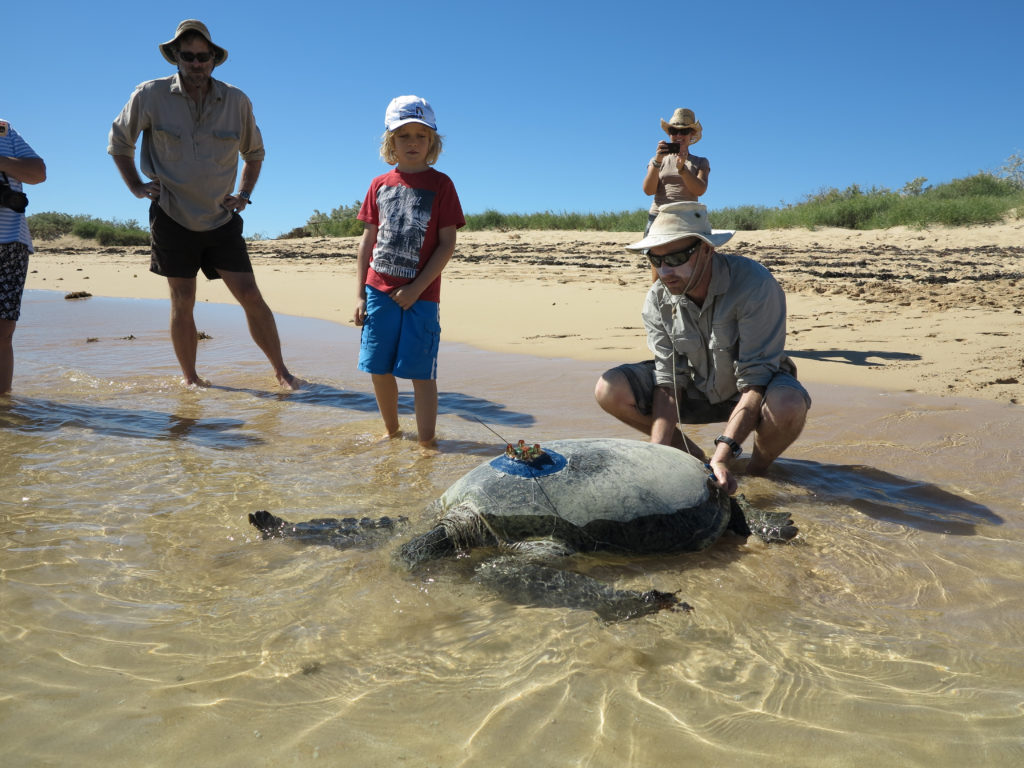 During the first year of the CSIRO-BHP Billiton Ningaloo Outlook research partnership, our science team tagged 60 animals (turtles; reef sharks and whale sharks) with three different types of tags, surveyed fish, corals and macroalgae along 7 kilometres of the reef, and 12,000 hectares of deep habitat!

To mark the end of the first year we, along with BHP Billiton and representatives from a range of organisations including the Department of Parks and Wildlife, Australian Institute of Science, Department of Fisheries, and Industry groups came together to hear some of the findings from the first 12 months of research at the Ningaloo Outlook Symposium in February 2016. This included observations from the tagging team that there may be a resident population of green turtles at Ningaloo.

It’s still early days, but data from the green turtles tagged in May 2015 (outside the nesting season) have so far exhibited very residential movement patterns, whilst nesting turtles have moved much greater distances even in the short time they have been tagged. This information is helping to dispel some of the myths around turtles and where they spend their time. 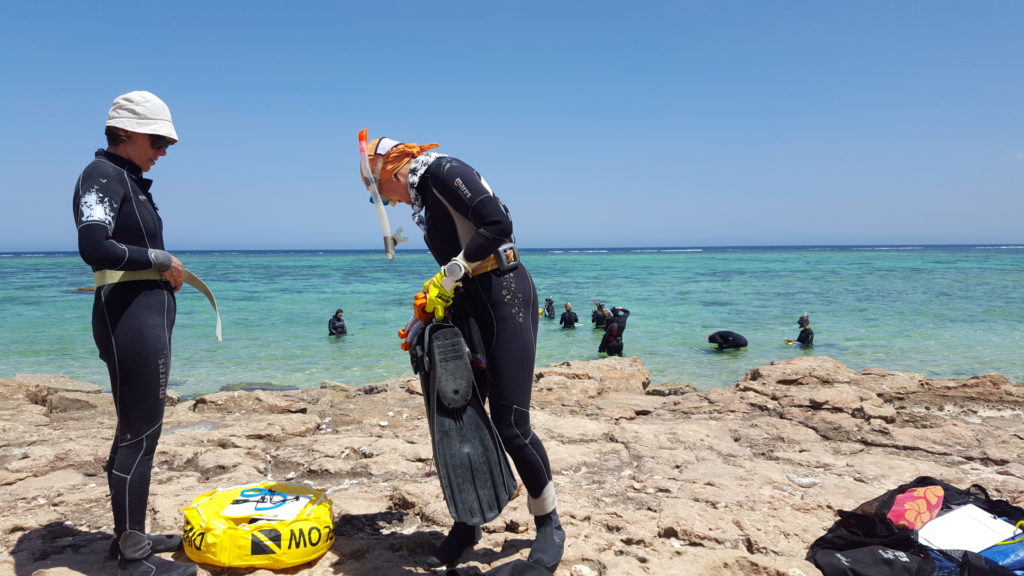 The Cape Conservation Group during a reef-check training.

The shallow reef research team surveyed over 70 sites along the Ningaloo coast from Osprey (in the south) to Jurabi (in the north), and recorded 208 different species from 45 families, with two dominant fish families recorded, Lutjanidae (snappers) and Scaridae (parrotfishes). The mean biomass recorded was 777 kg ha-1 which is comparable to average global biomass values for unfinished areas found in other studies of around 1 000 kg ha-1. 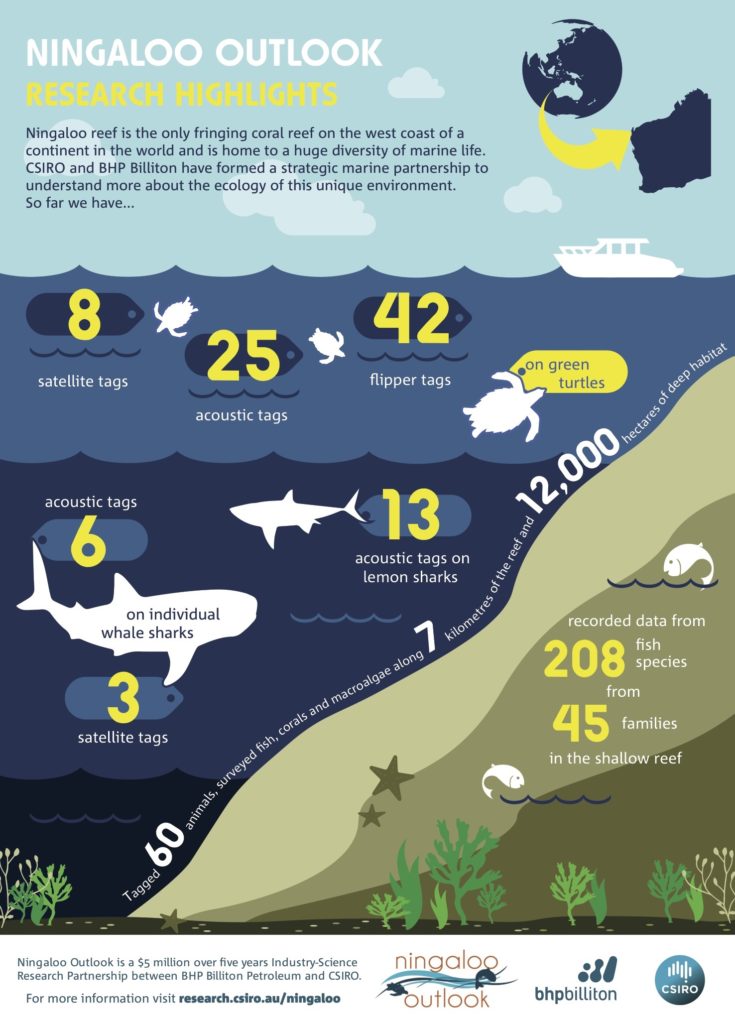 Preliminary results from 2015 surveys suggest coral communities between Osprey and Jurabi are generally in good condition, with the exception of some localised impacts as a result of the 2010/2011 heatwave event.

An important part of the Ningaloo Outlook project is the involvement with the local community. Both the tagging and shallow reef research teams have been working closely with the Cape Conservation Group, with volunteers helping to tag green turtles. Our staff were also on-hand to train volunteers as part of the Ningaloo Coast reef check training program in March. The team will also be providing an update to the Exmouth community on the 10th May 2016 at the Exmouth Yacht Club, where there will also be an opportunity for questions.

The research team are now busily preparing for field trips which will be executed during the May to August period. 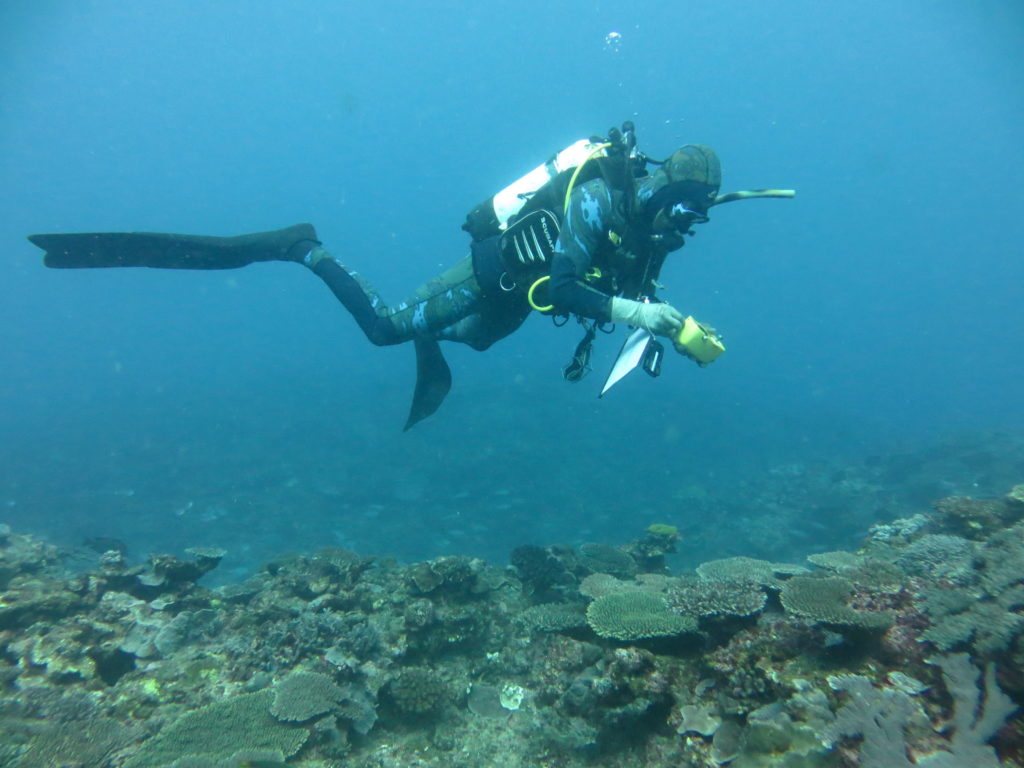 Our Research Scientists completing a survey to assess relative abundance of coral as part of the shallow reef research. Image – Damian Thomson

The first field trip for the second year of research will be the shallow reef surveys.  These will be conducted in early May along the Ningaloo Reef, from Osprey to Jurabi.

According to our lead researcher on the project, Damian Thomson, it  will be exciting to see if coral cover has continued to increase in some areas, and what the potential impacts of the current global heatwave has been on corals, fish, and sharks at Ningaloo.

“We will be downloading temperature loggers we deployed with Reefcheck and Cape Conservation Group back in March, which will reveal if the heating event has indeed been as severe as we have seen further north in the Kimberley region of WA and on the Great Barrier Reef. It will be a busy trip!”

Members of the Ningaloo Outlook research team will also be on-hand at the annual Ningaloo WhaleShark Festival, held in Exmouth from the 26th to 29th May 2016. Look at for the team on the Talanjee Oval, at the Festival Day (Saturday 28th May 2016).

Find out more about our Ningaloo Outlook research here.

Previous post:
Shipboard stories from Investigator
Coming up next:
Top 7 science images of the week