PhD student Madi Rosevear tell us what it's like to live on board the Investigator, and explains just what the heck CTDs and XBTs are.

What’s life at sea really like on the science super ship Investigator? Find out over coming weeks as we hear shipboard stories from those on board the current voyage of ice and fire. Our first voyage report comes from Antarctic Gateway Partnership PhD student, Madi Rosevear, of the University of Tasmania. 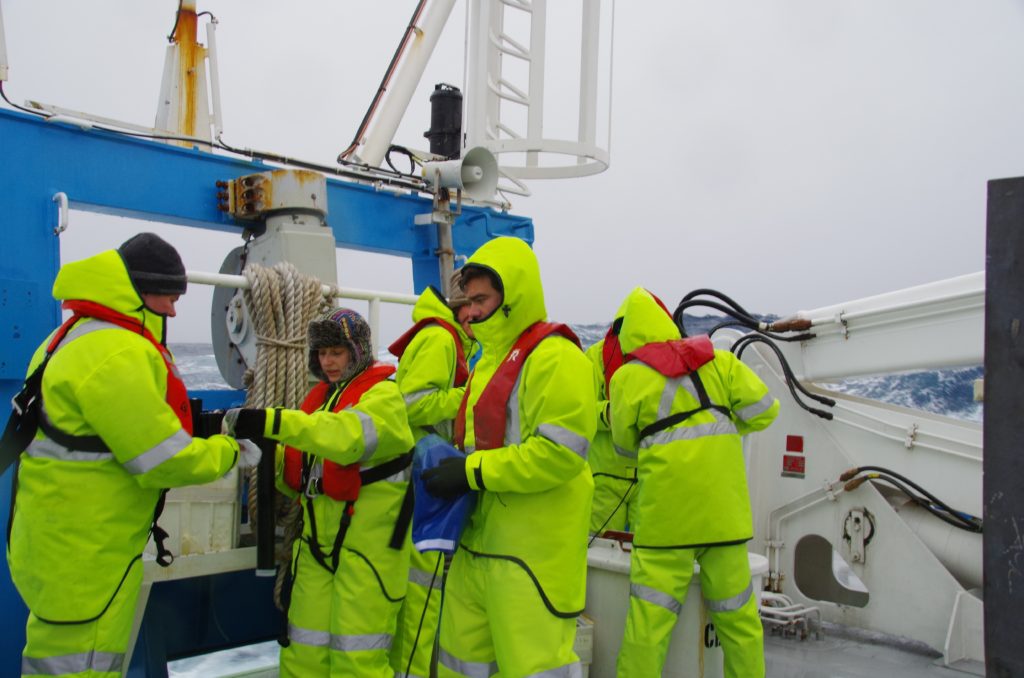 Scientists on board ship deck in high visibility yellow suits.

It’s 2am Investigator time, which is halfway between Australian and New-Zealand time, loosely related to our geographical position. Half the clocks on the ship read Greenwich Mean Time (GMT) though, for consistency in the data we’re recording, which means I’m almost always confused about what time it is!

I’ve just come off a 12 hour shift, 2pm to 2am, and am sitting in my cabin with just a gentle swell, barely noticeable after a few wilder days, rocking the boat. Rumour has it you can hear four different types of water down here: the swell, the ballast, the anti-roll tank (this uses water to counteract the roll of the ship) and the internal plumbing. Together they’re reasonably loud but somewhat soothing. Most importantly, they are constant so they drown out the inevitable clanging and crashing of the 24 hour a day activity on the ship. 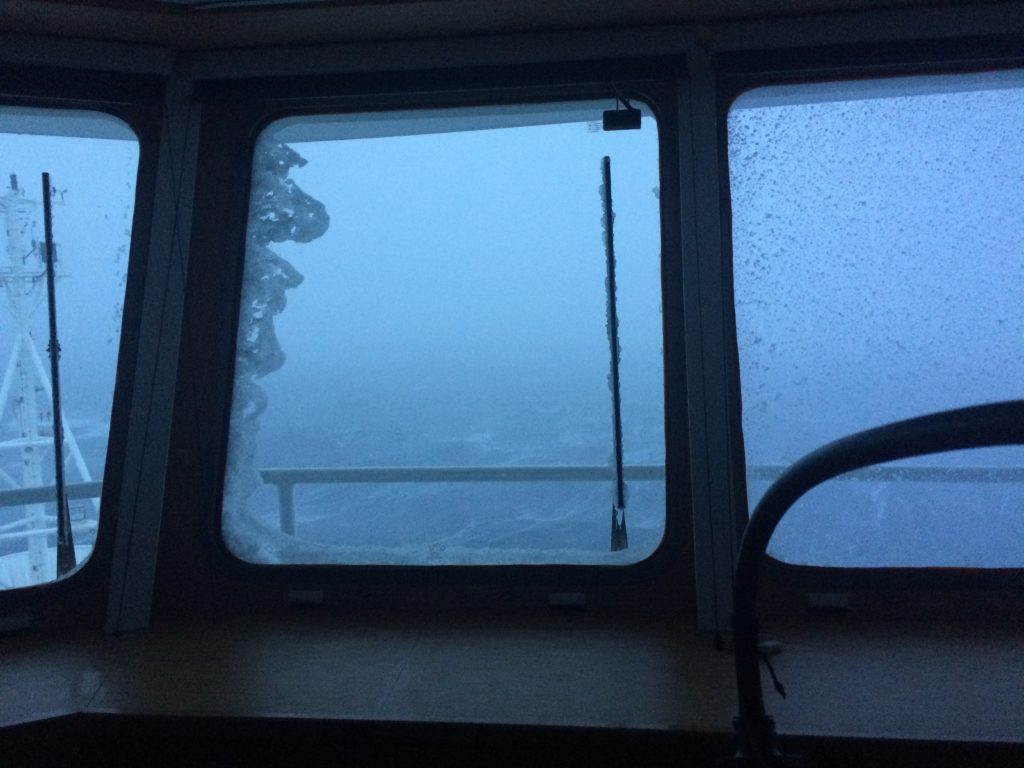 And icy window from the ship deck.

Winter is definitely coming! Another cold day on board the Investigator.

It’s currently day five of our 30 day (60 for some!) voyage and we’re hurrying to beat the expanding sea-ice as we make a beeline towards Antarctica and our first CTD stations. CTD stands for Conductivity-Temperature-Depth probe and is a piece of equipment that measures conditions in the ocean. All of our CTD stations are on line of longitude 170° W so there are no casts to do on the way south. This means that for those of us on CTD watch, the days (or nights) are very quiet, punctuated only by the excitement of the occasional Argo float deployment or XBT launch (more about these later). 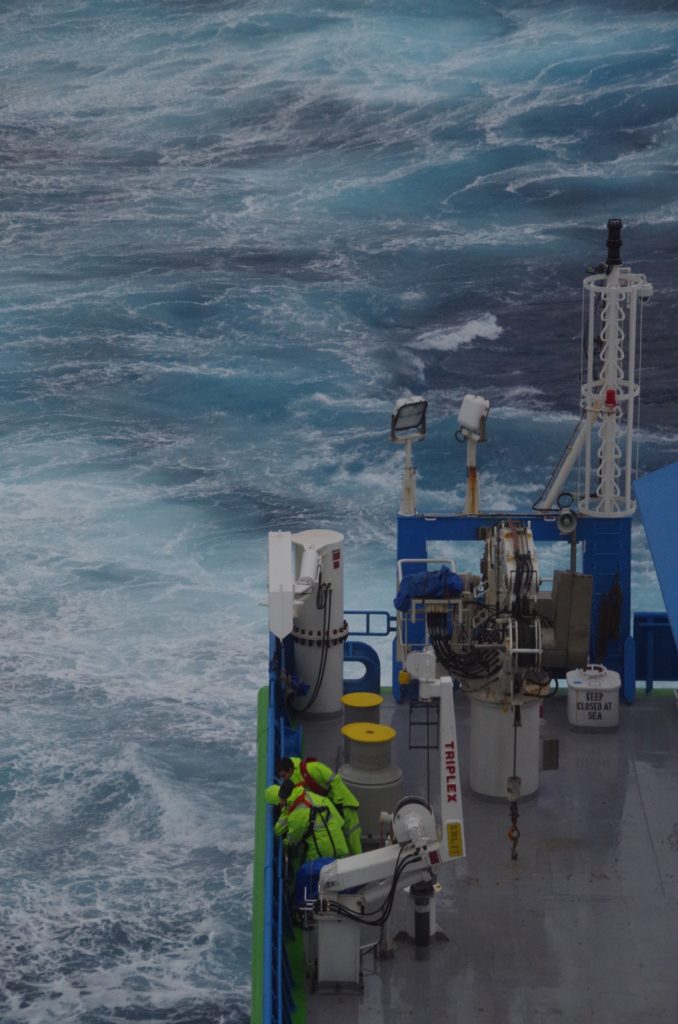 Image of rough seas taken on board the ship.

The wild weather of the Southern Ocean. Image: Bernadette Sloyan.

Argo floats measure temperature and salinity from 2000 metre depth to the surface every 10 days. The deployments have gone off largely without a hitch, one float being hesitant to let go of its cardboard box and enter the wild Southern Ocean, but the crew got it away safely in the end.

The XBT launches have been a different story. The XBTs, or XXBTs as we’ve been calling them (eXtra eXpendable Bathy Thermographs), are torpedo shaped devices that drop through the water column to measure temperature, with data being sent back along a very thin copper wire. The XBTs we are using are an old batch from 90s that are too unreliable to be useful in gathering temperature data but can be useful in other ways.

XBTs don’t have pressure sensors, their vertical position in the water column is calculated from a fall rate equation. As a result of this, evolution in XBT shape over the years have led to the introduction of temperature bias due to changes in the relationship between displacement and time. Lots of work has gone into correcting this bias, but there’s still plenty to be done.

Which brings me back to our XXBTs. One way of relating depth and time is to let the XBT hit the sea floor, provided we know how deep the ocean is at that point. For us to get a meaningful result, we need lots of repeat measurements and we need a lot of shallow ocean.

So this morning, as we were passing over the Macquarie Rise (about 1300 metres depth), we headed out to the back deck in two teams to deploy three crates worth of XBTs as quickly as possible.

The conditions were challenging, to say the least. It was our first rainy day at sea, and it was bitterly cold and wet. The swell was large enough that, from time to time, the deck was awash with seawater.

With 36 XBTs to deploy from two launchers, we were ready to get pretty cold! But as soon as we started, an unhelpful pattern developed. We’d load and launch the XBTs, only to hear the phrase ‘failed, break the wire’ over the radio from Bec, who was receiving the data in the sheltered science area.

There were a few successes. One of the crates was clearly in better condition, or being fired into better conditions, than the others but by the time we were two crates in it had become clear that we weren’t going to get enough data for a meaningful result. So we traipsed back inside, a little disappointed to have had such a low success rate and a little relieved to get back into the warm.

Fortunately we have plenty of newer, more reliable XBTs to deploy over the coming weeks.

In the (many, many) hours between deployments, the CTD watch can be found in the operations room, processing and plotting some of the ship based ‘underway’ measurements These are constantly measured by Investigator and include air and water temperature, salinity and the velocity of the upper 500-800m of ocean. These measurements are automatically logged and even, in some cases, quality controlled by the ship’s software.  Having a pair of human eyes on it is extremely valuable in terms of ensuring that everything is working as it should though. It also allows us to start trying to understand the observations we’re making of the current state of the ocean, as seen by Investigator.

Hopefully by time of our next shipboard story, we will have some results to share with you!

Want to get your research on board Investigator? Check out our video on how you can work with us.