Genetic evolution: how the Ebola virus changes and adapts

Genetic evolution: how the Ebola virus changes and adapts 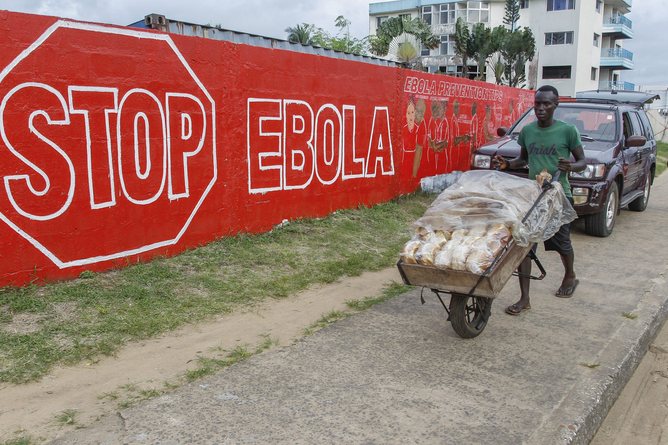 epa04402079 A Liberian man pushes bread past a wall mural part of a sensitization programme about the deadly Ebola virus in Monrovia, Liberia 15 September 2014. The World Health Organization (WHO) has said the number of deaths from Ebola has risen to 2400 in West Africa with half that number coming from Liberia the hardest hit country in the region. EPA/AHMED JALLANZO

The current outbreak of Ebola virus in West Africa is unprecedented in size, with nearly 4,800 confirmed or probable cases and more than 2,400 deaths. People have been infected in Guinea, Liberia, Sierra Leone, Nigeria and Senegal.

The World Health Organization declared this outbreak a “public health emergency of international concern” in August and estimates it will claim a staggering 20,000 lives within the next six months.

A second completely independent and significantly smaller Ebola virus outbreak has been detected in the Democratic Republic of the Congo.

Like all viruses, the Ebola virus has evolved since the outbreak began. So, how does this occur and how does it impact our attempts to contain the disease?

Ebolavirus and the closely related Marburgvirus genera belong to the Filoviridae family. Both of these genera contain viruses that may cause fatal haemorrhagic fevers.

The Ebola virus genus is made up of five virus species: Zaire ebolavirus (responsible for both of the current outbreaks), Sudan ebolavirus, Reston ebolavirus, Bundibugyo ebolavirus and Taï Forest ebolavirus.

In order to better understand the origin and transmission of the current outbreak in West Africa, researchers from the Broad Institute and Harvard University, in collaboration with the Sierra Leone Ministry of Health, sequenced 99 virus genomes from 78 patients.

The study, reported in Science, shows the outbreak resulted from a single introduction of virus into the human population and then ongoing human-to-human transmission. The scientists reported more than 300 unique changes within the virus causing the current West African outbreak, which differentiates this outbreak strain from previous strains. Within the 99 genomes sequenced from this outbreak, researchers have recorded approximately 50 other changes to the virus as it spreads from person to person. Future work will investigate whether these differences are contributing to the severity of the current outbreak.

These 99 genome sequences have been promptly released to publicly available sequence databases such as Genbank, allowing scientists globally to investigate changes in these viruses. This is critical in assessing whether the current molecular diagnostic tests can detect these strains and whether experimental therapies can effectively treat the circulating strains.

How does Ebola evolve?

This is the first Ebola virus outbreak where scientists have sequenced viruses from a significant number of patients. Despite this, the Broad Institute/Harvard University study findings are not unexpected.

The Ebola virus genome is made up of RNA and the virus polymerase protein that does not have an error-correction mechanism. This is where it gets a little complicated, but bear with me.

As the virus replicates, it is expected that the virus genome will change. This natural change of virus genomes over time is why influenza virus vaccines must be updated annually and why HIV mutates to become resistant to antiretroviral drugs.

Changes are also expected when a virus crosses from one species to another. In the case of Ebola virus, bats are considered to be the natural host, referred to as the “reservoir host”. The virus in bats will have evolved over time to be an optimal sequence for bats. Crossing over into another species, in this case people, puts pressure on the virus to evolve. This evolution can lead to “errors” or changes within the virus which may make the new host sicker.

Ebola viruses are known to rapidly evolve in new hosts, as we’ve seen in the adaptation of lab-based Ebola viruses to guinea pigs and mice. This adaptation occurred by passing a low-pathogenic virus from one animal to the next until the Ebola virus was able to induce a fatal disease. Only a small number of changes were required in both cases for this to occur.

While this kind of viral mutation is well known with other viruses, such as influenza virus, we are only truly appreciating the extent of it with the Ebola viruses.

What do the genetic changes mean?

The Broad Institute/Harvard University study reported that the number of changes in genome sequences from this current outbreak was two-fold higher than in previous outbreaks.

This could be due to the increased number of sequences obtained over a period of several months, and the fact that the virus has undergone many person-to-person passes in this time.

However, it will be important to determine if virus samples from early and late in the outbreak have differing ability to cause disease or transmit. The genetic changes may, for example, influence the level of infectious virus in bodily fluids, which would make the virus easier to spread.

Analysing this data will help us understand why this outbreak has spread so rapidly with devastating consequences and, importantly, how we can better contain and manage future outbreaks.

Previous post:
Historic collections could be lost to ‘digital dinosaurs’
Coming up next:
What’s in your porcini packet? You may find a new species … or three