The Antarctic Circumpolar Current, or ACC, is the strongest ocean current on our planet and is vital for Earth’s health because it keeps Antarctica cool and frozen.

The Antarctic Circumpolar Current, or ACC, is the strongest ocean current on our planet. It extends from the sea surface to the bottom of the ocean, and encircles Antarctica.

It is vital for Earth’s health because it keeps Antarctica cool and frozen. It is also changing as the world’s climate warms. Scientists like us are studying the current to find out how it might affect the future of Antarctica’s ice sheets, and the world’s sea levels.

The ACC carries an estimated 165 million to 182 million cubic metres of water every second (a unit also called a “Sverdrup”) from west to east, more than 100 times the flow of all the rivers on Earth. It provides the main connection between the Indian, Pacific and Atlantic Oceans.

The tightest geographical constriction through which the current flows is Drake Passage, where only 800 km separates South America from Antarctica. While elsewhere the ACC appears to have a broad domain, it must also navigate steep undersea mountains that constrain its path and steer it north and south across the Southern Ocean. 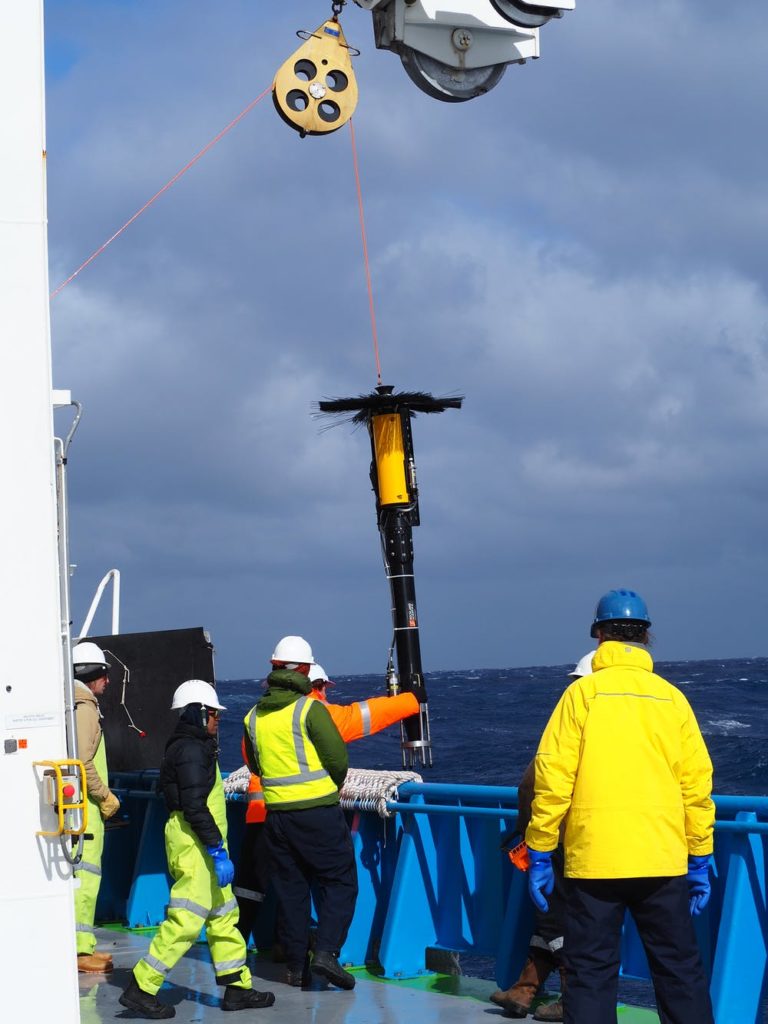 Researchers on board a vessel wearing high-vis gear, using a crane like structure to lower a probe into the ocean.

What is the Antarctic Circumpolar Current?

A satellite view over Antarctica reveals a frozen continent surrounded by icy waters. Moving northward, away from Antarctica, the water temperatures rise slowly at first and then rapidly across a sharp gradient. It is the ACC that maintains this boundary. 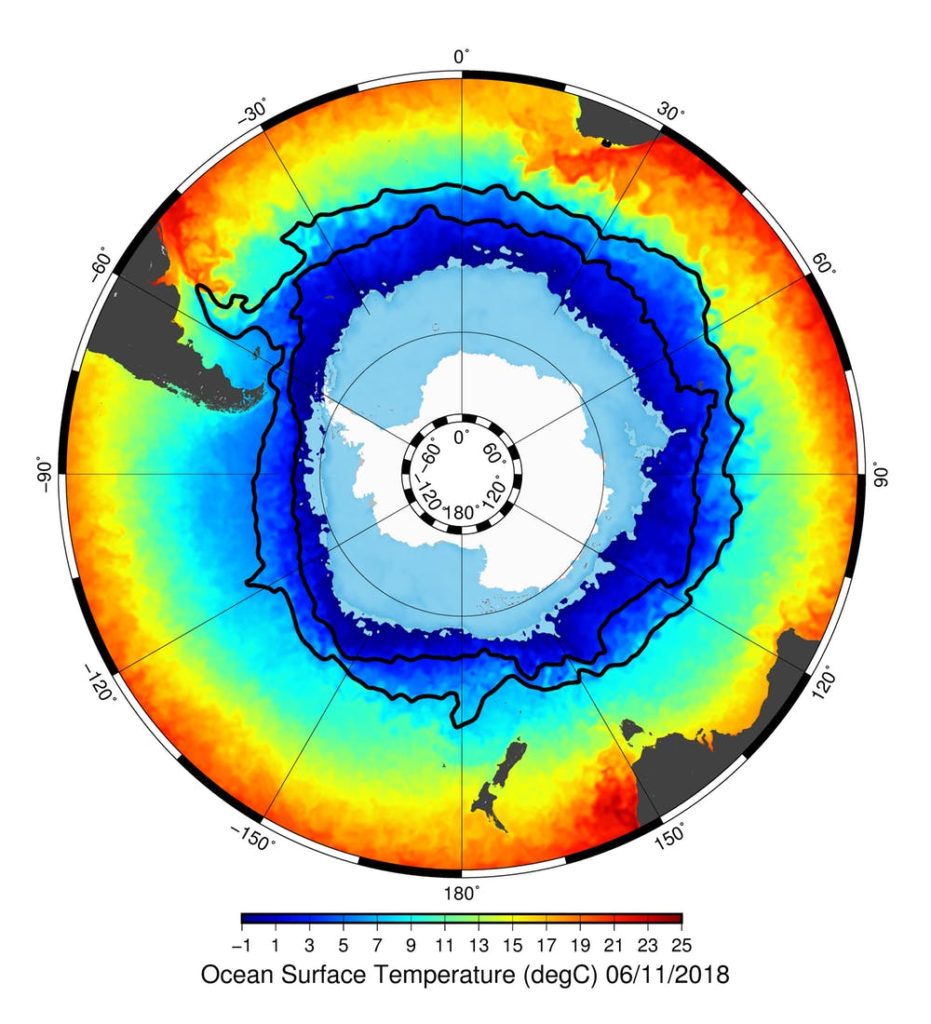 A map of ocean surface temperatures, which shows different temperatures using different colours. Those closest to Antarctica are darkest blue, signifying that they're the coldest.

Map of the ocean surface temperature as measured by satellites and analysed by the European Copernicus Marine Services. The sea ice extent around the antarctic continent for this day appears in light blue. The two black lines indicate the long term position of the southern and northern front of the Antarctic Circumpolar Current.

The ACC is created by the combined effects of strong westerly winds across the Southern Ocean, and the big change in surface temperatures between the Equator and the poles.

Ocean density increases as water gets colder and as it gets more salty. The warm, salty surface waters of the subtropics are much lighter than the cold, fresher waters close to Antarctica. We can imagine that the depth of constant density levels slopes up towards Antarctica.

The westerly winds make this slope steeper, and the ACC rides eastward along it, faster where the slope is steeper, and weaker where it’s flatter.

In the ACC there are sharp changes in water density known as fronts. The Subantarctic Front to the north and Polar Front further south are the two main fronts of the ACC (the black lines in the images). Both are known to split into two or three branches in some parts of the Southern Ocean, and merge together in other parts. 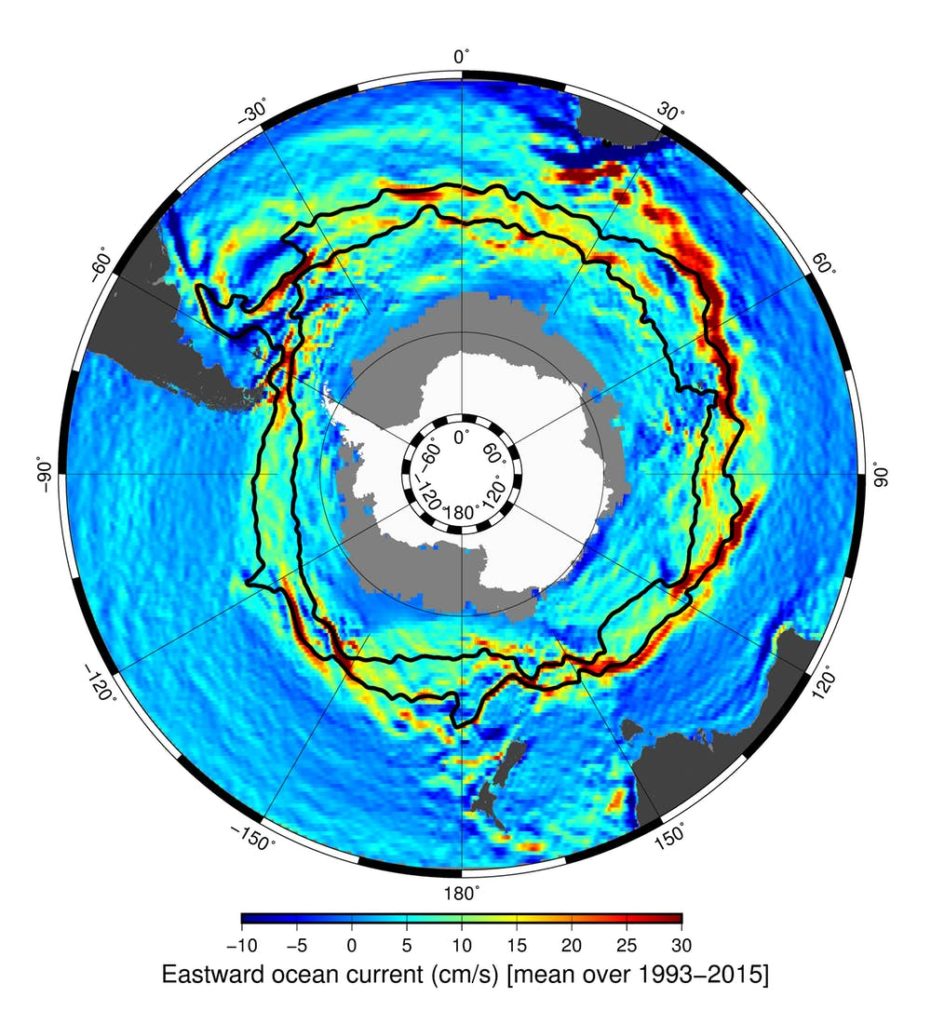 A colour-coded made of water speed around the Antarctic.

Map of how fast the waters around Antarctica are moving in an easterly direction. It is produced using 23 years of satellite altimetry (ocean height) observations as provided by the European Copernicus Marine Services. Author provided.

The path of the ACC is a meandering one, because of the steering effect of the sea floor, and also because of instabilities in the current.

The ACC also plays a part in the meridional (or global) overturning circulation, which brings deep waters formed in the North Atlantic southward into the Southern Ocean. Once there it becomes known as Circumpolar Deep Water, and is carried around Antarctica by the ACC. It slowly rises toward the surface south of the Polar Front.

Once it surfaces, some of the water flows northward again and sinks north of the Subarctic Front. The remaining part flows toward Antarctica where it is transformed into the densest water in the ocean, sinking to the sea floor and flowing northward in the abyss as Antarctic Bottom Water. These pathways are the main way that the oceans absorb heat and carbon dioxide and sequester it in the deep ocean.

The ACC is not immune to climate change. The Southern Ocean has warmed and freshened in the upper 2,000 m. Rapid warming and freshening has also been found in the Antarctic Bottom Water, the deepest layer of the ocean.

Waters south of the Polar Front are becoming fresher due to increased rainfall there, and waters to the north of the Polar Front are becoming saltier due to increased evaporation. These changes are caused by human activity, primarily through adding greenhouse gases to the atmosphere, and depletion of the ozone layer. The ozone hole is now recovering but greenhouse gases continue to rise globally.

Winds have strengthened by about 40% over the Southern Ocean over the past 40 years. Surprisingly, this has not translated into an increase in the strength of the ACC. Instead there has been an increase in eddies that move heat towards the pole, particularly in hotspots such as Drake Passage, Kerguelen Plateau, and between Tasmania and New Zealand.

We have observed much change already. The question now is how this increased transfer of heat across the ACC will impact the stability of the Antarctic ice sheet, and consequently the rate of global sea-level rise.

Previous post:
Real hot city? Our science has the Dar-winning solution
Coming up next:
Nursing Grey Nurse Shark populations back to health