Real hot city? Our science has the Dar-winning solution

Real hot city? Our science has the Dar-winning solution

Darwin residents will be working with our scientists as we help develop sustainable cities of the future. 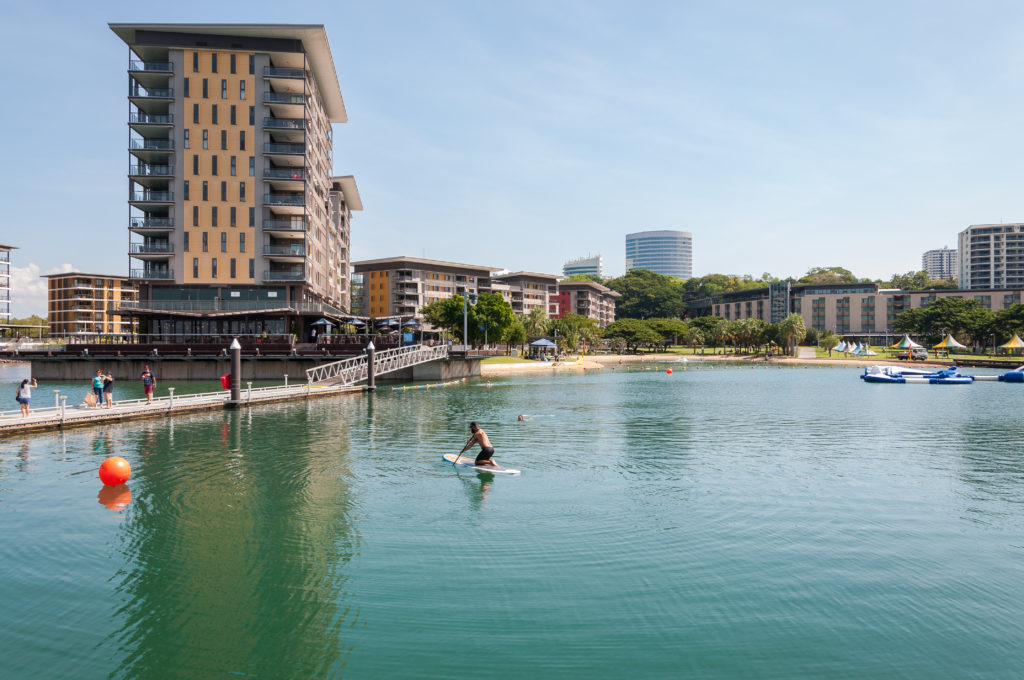 Living in the tropical heat of Darwin is about to become a whole lot cooler and we are not talking about an influx of young trendsetters….although that might also occur because the city is earmarked for an urban living lab. What in the world is an urban living lab? Well, grab yourself an iced beverage and we’ll tell you all about it.

Not a lab by nature

While the words ‘urban living lab’ might conjure up images of scientists in white coats running their latest experiments in a suburban house with local residents, in reality our Darwin lab will be much more a part of the local CBD environment and urban surrounds – making it very ‘unlab like’ by nature.

The city is your playground but it’s also an interactive lab. It will involve researchers testing the latest heat mitigation technologies and energy-efficient building designs across the city giving us a real-world test bed for new technology and innovations. We’ll work with government over a 10 year period to transition Darwin to a ‘greener’, tropical city.

Delivering our research through urban living labs, provides scientists with everyday environments to test new technologies and new ways of integrating work, family and leisure. It’s a pretty unique way of taking science from the lab into the here and now to really put it through its paces. Over the next 50-100 years, Australia will need to accommodate a doubling of its population and scientists are investigating ways to accommodate this growth, while maintaining high standards of living. In order to solve complex city problems, scientists are increasingly being drawn out of their institutional confines to conduct real-world experiments relevant to everyday life. Urban living labs provide this arena – places where local knowledge and scientific expertise come together.

Hot in the city

Fancy a Darwin city walking tour? It’s ambitious given Darwin’s average December temperature is 30 degrees and humidity is around 75 per cent but not impossible thanks to the growing capabilities and advances in urban environmental science. One of our top ecologists leading our work in the development of Northern Australia and Darwin local Chris Chilcott says residents currently prefer to go to shopping centres where there is free parking and air conditioning. The lab is aiming to help transform the city into a place where people have enough shade and cooling options to want to get outdoors and walk around the paths, restaurants and shops.

Cooling the city in Darwin is a real challenge. Recent work by University of NSW found that Darwin CBD surface temperatures are 10-20 degrees cooler when in shade. To combat this, we’ll be looking at initiatives like new shade structures incorporating greenery such as vines and creeping plants, the use of water features throughout the CBD and new office buildings designed to be more energy efficient and reduce the heat. And then we bring in the science! We’ll measure how effective these initiatives are by assessing costs with benefits and interacting with residents through surveys, face-to-face catch-ups in the city. So we are basically offering Darwinites the chance to engage and participate in the science directly…. without the lab coats of course.

The concept of urban living labs has gained momentum internationally with similar concepts popping up in Europe. However it’s a relatively new area in Australia with scientists still developing the criteria for potential sites and talking with those who build and shape our cities.

Work has commenced on the Sydney Science Park Urban Living Lab in Western Sydney, we are planning to create a Ginninderra Urban Living Lab in Canberra, and have now put the finishing touches on the proposal for the Darwin Urban Living Lab. Darwin is the ideal location for our next venture because it’s a manageable size with a population of about 140,000. It’s on a scale that allows us to readily understand how the city works and evaluate the effectiveness of investments in tropical urban design for a sustainable and resilient future.

Eventually we’d like to develop a portfolio of urban living labs, spanning different climates, environments and urban development contexts, so that we can maximise the opportunities for innovation and learning.

Worth more than $6 million, the Darwin Urban Living Lab is part of the $100 million Darwin City Deal announced on Friday 16 November. The lab will be at the forefront of creating tropical city knowledge and ‘know how’ that can be translated into products and services for other tropical cities in Australia and neighbouring countries in the ASEAN (Association of Southeast Asian Nations) region. It will be funded by us with support from the Australian Government, the NT Government and the City of Darwin.