What kind of country will Australia be in 2060?

What kind of country will Australia be in 2060?

A prosperous future is within our grasp. The Australian National Outlook 2019 addresses the question: What kind of country will Australia be in 2060?

This article was first published in The Conversation.

Australia’s future prosperity is at risk unless we take bold action and commit to long-term thinking. This is the key message contained in the Australian National Outlook 2019 (ANO 2019), a report that we published today with our partners.

Our new research used a scenario approach to model different visions of Australia in 2060.

We contrasted two core scenarios: a base case called Slow Decline, and an Outlook Vision scenario which represents what Australia could achieve. These scenarios took account of 13 different national issues, as well as two global contexts relating to trade and action on climate change.

We found there are profound differences in long-term outcomes between these two scenarios.

Slow decline versus a new outlook

Australia’s living standards – as measured by Gross Domestic Product (GDP) per capita – could be 36% higher in 2060 in the Outlook Vision, compared with Slow Decline. This translates into a 90% increase in average wages (in real terms, adjusted for inflation) from today. 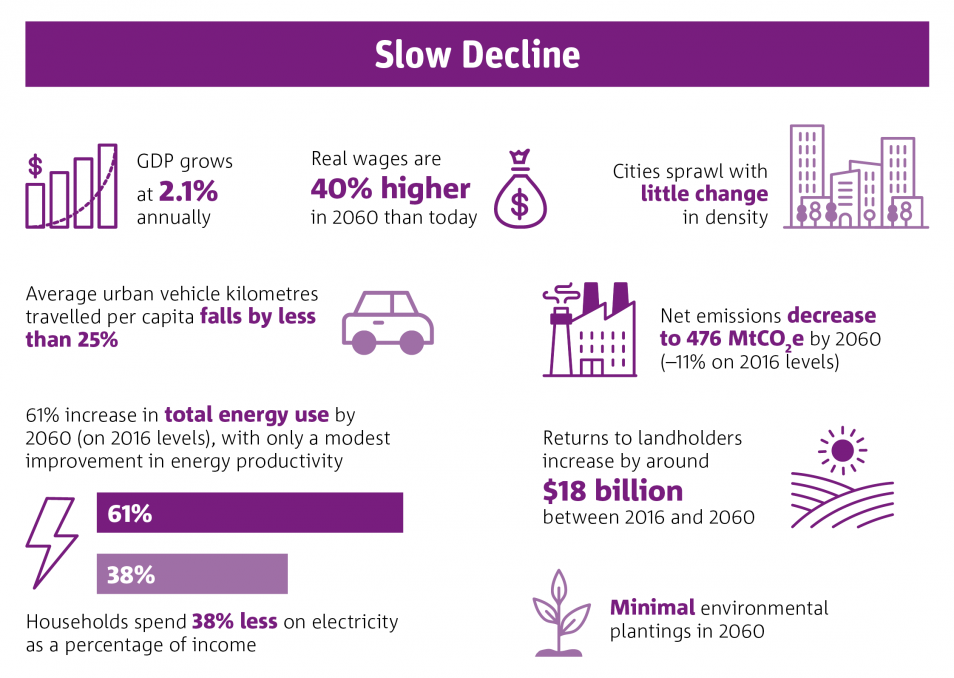 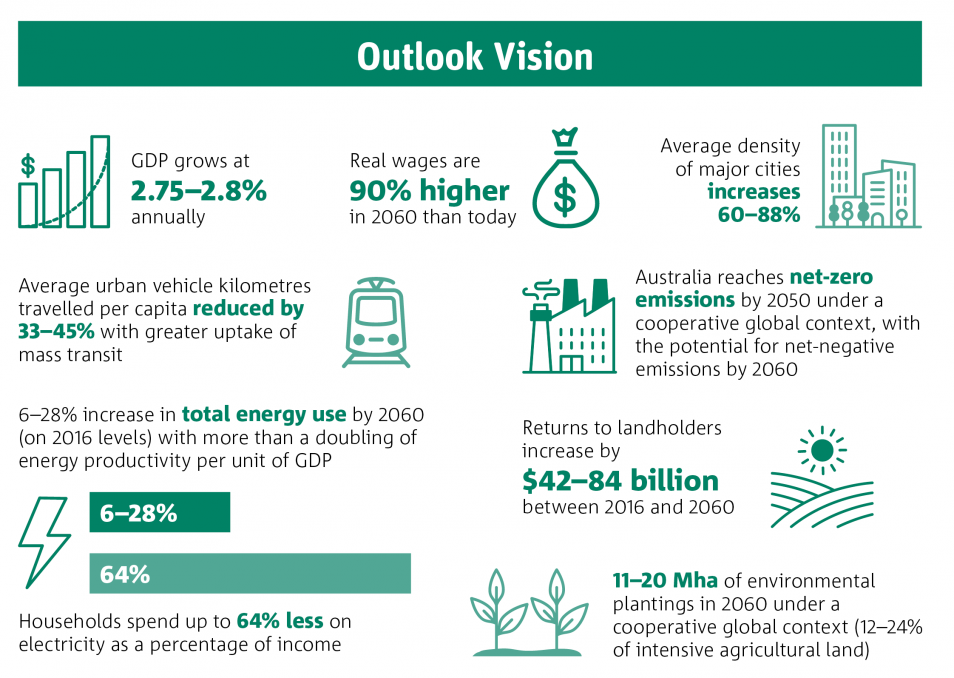 The Outlook Vision scenario shows what could be possible if Australia meets identified challenges. Image: CSIRO

Australia could maintain its world-class, highly liveable cities, while increasing its population to 41 million people by 2060. Urban congestion could be reduced, with per capita passenger vehicle travel 45% lower than today in the Outlook Vision. 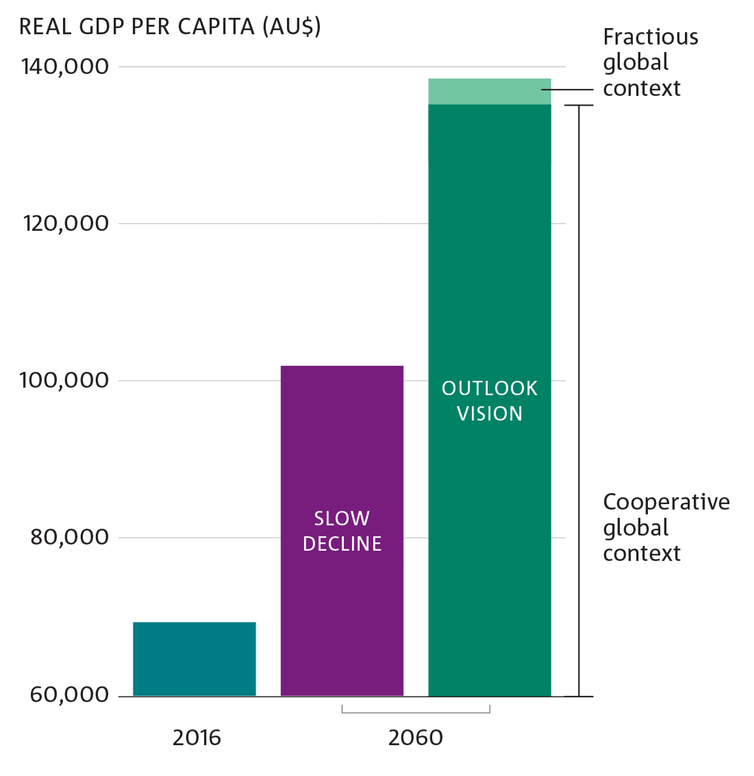 Australia could achieve net-zero emissions by 2050 while reducing household spend on electricity (relative to incomes) by up to 64%. Importantly, our modelling shows this could be achieved without significant impact on economic growth.

Low-emissions, low-cost energy could even become a source of comparative advantage for Australia, opening up new export opportunities.

And inflation-adjusted returns to rural landholders in Australia could triple to 2060, with the land sector contribution to GDP increasing from around 2% today to over 5%.

At the same time, ecosystems could be restored through more biodiverse plantings and land management. 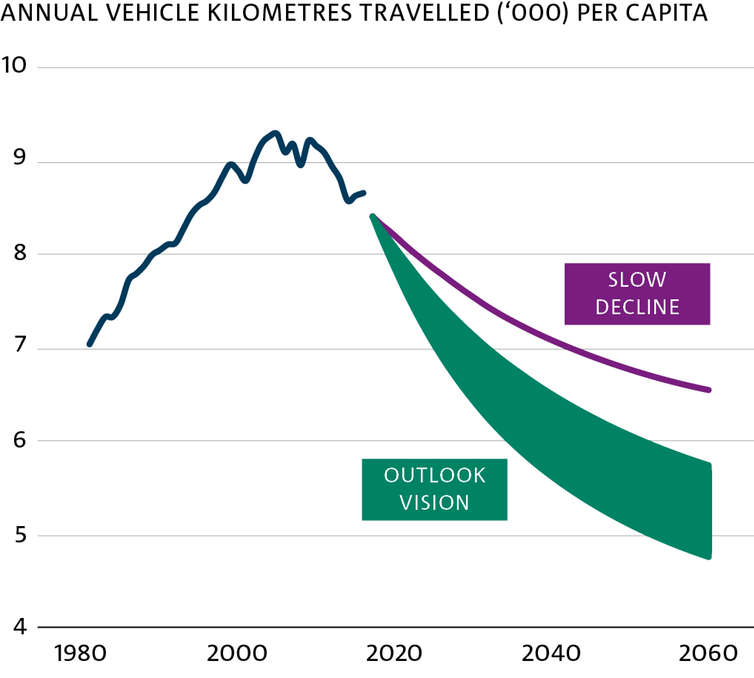 Historical trend for vehicle kms travelled (VKT) on urban roads, per capita, and projections resulting from the modelled Slow Decline and Outlook Vision scenarios. The shaded area for Outlook Vision represents the range of outcomes possible depending on how regional satellites cities develop. Image: CSIRO

The report, developed over the last two years, explores what Australia must do to secure a future with prosperous and globally competitive industries, inclusive and enabling communities, and sustainable natural endowments, all underpinned by strong public and civic institutions.

So how do we get there?

Achieving the outcomes in the Outlook Vision won’t be easy.

Australia will need to address the major challenges it faces, including the rise of Asia, technology disruption, climate change, changing demographics, and declining social cohesion. This will require long-term thinking and bold action across five major “shifts”:

The report outlines the major actions that will underpin each of these shifts.

For example, the industry shift would see Australian firms adopt new technologies (such as automation and artificial intelligence) to boost productivity, which accounts for a little over half of the difference in living standards between the Outlook Vision and Slow Decline.

Developing human capital (through education and training) and investment in high-growth, export-facing industries (such as healthcare and advanced manufacturing) each account for around 20% of the difference between the two scenarios.

The urban shift would see Australia increase the density of its major cities by between 60-88%, while spreading this density across a wider cross-section of the urban landscape (such as multiple centres).

Combining this density with a greater diversity of housing types and land uses will allow more people to live closer to high-quality jobs, education, and services.

In the energy shift, across every scenario modelled, the electricity sector transitions to nearly 100% renewable generation by 2050, driven by market forces and declining electricity generation and storage costs.

Likewise, electric vehicles are on pace to hit price-parity with petrol ones by the mid-2020s and could account for 80% of passenger vehicles by 2060.

In addition, Australia could triple its energy productivity by 2060, meaning it would use only 6% more energy than today, despite the population growing by over 60% and GDP more than tripling. 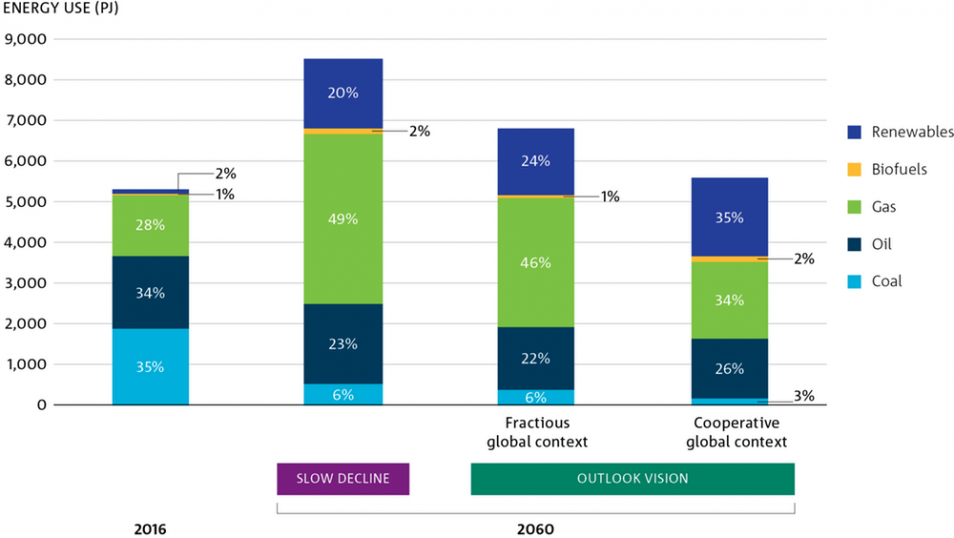 Primary energy use in Australia under the modelled scenarios. Primary energy is the measure of energy before it has been converted or transformed, and includes electricity plus combustion of fuels in industry, commercial, residential and transport. Image: CSIRO

The land shift would require boosting agricultural productivity (through a combination of plant genomics and digital agriculture) and changing how we use our land.

By 2060, up to 30 million hectares – or roughly half of Australia’s marginal land within more intensively farmed areas – could be profitably transitioned to carbon plantings, which would increase returns to landholders and offset emissions from other sectors.

As much as 700 millions of tonnes of CO₂ equivalent could be offset in 2060, which would allow Australia to become a net exporter of carbon credits.

The last, and perhaps most important shift, is the cultural shift.

Trust in government and industry has eroded in recent years, and Australia hasn’t escaped this trend. If these institutions, which have served Australia so well in its past, cannot regain the public’s trust, it will be difficult to achieve the long-term actions that underpin the other four shifts.

Unfortunately, there is no silver bullet here.

Previous post:
A scientific show and tell with Dr Larry Marshall
Coming up next:
ET continues to elude scientists…for now