A scientific show and tell with Dr Larry Marshall

A scientific show and tell with Dr Larry Marshall

We put our Chief Executive, Dr Larry Marshall up for a special episode of Q&A. But we’ve since had a lot of questions about what he raised on the show. So like Larry after smuggling all his gadgets into the ABC studios, let’s unpack all the highlights and what they mean for cleaner energy. 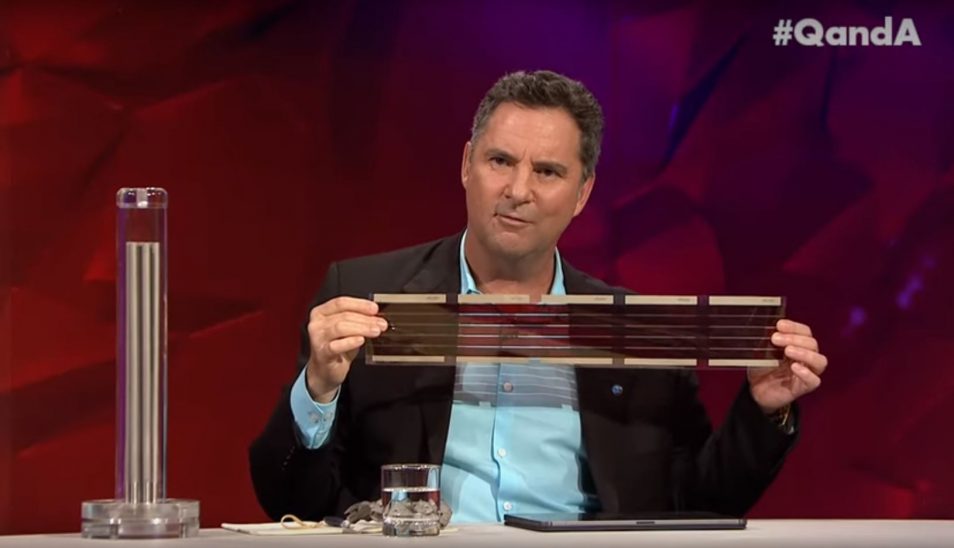 Larry with a flexible solar panel and hydrogen cracker, part of our plan for cleaner energy

Something kind of awesome happened last Monday. Did you catch it?

Our Chief Executive, Dr Larry Marshall appeared on Q&A for a special Vivid Sydney episode. And he didn’t disappoint. Naturally, we’ve had a lot of follow-up questions from our fans on some of the topics Larry spoke about.

So like Larry after smuggling all his gadgets into the ABC studios, let’s unpack some of the highlights! We’re going to show what these gadgets mean for the future of cleaner energy here in Australia.

Hydrogen: a cracker of an element

Some of you online called it a bong, others called it a prop from Mary Poppins. But this “thingy” is called a hydrogen cracker and it could be the key to unlocking our future in clean energy.

Our current energy exports consist of gas and coal, but there’s also an opportunity to export our clean energy. This includes solar. But it’s impossible to export solar energy unless you store and transport it in a fuel like hydrogen.

Hydrogen is a clean, abundant and highly adaptable element. But once we’ve produced the hydrogen, there are challenges in getting it to where it’s needed. Hydrogen has low density, making it very difficult to store and transport. Therefore it must be pressurised and carried by a pipeline, tanker or another secure method.

One idea is to use a ‘carrier’ fuel, like ammonia. Ammonia is a compound of nitrogen and hydrogen which is already used extensively in everyday household products (fertilisers, cleaners, etc). More importantly, it is way more stable than hydrogen.

But how do you get the hydrogen out again? Enter our hydrogen membrane! (also known as a hydrogen ‘cracker’). The membrane allows us to piggyback on existing infrastructure and transport hydrogen within the ammonia, to then extract it when we need it – like at a vehicle refuelling station.

“You can put a liquid fuel, ammonia, inside this and get pure hydrogen out the other side,” said Larry.

This has major ramifications for solving the problem of transporting hydrogen and other clean energy sources overseas for export.

The technology has been demonstrated successfully, powering two fuel cell vehicles with ultra-high purity hydrogen. This shows that there is scope for using it not only just in international exports but also domestically at your local petrol station.

The sun is shining on our printing parade

“So I’d like to do something a bit different – a home grown solar cell that we can produce here through…printing it rather than buying it from overseas,” said Larry.

Solar panels, or photovoltaic panels, convert sunlight to electricity that can power our constantly connected lives. But conventional silicon solar panels are not suited to all applications as they’re heavy, rigid and sometimes unsightly.

Our paper-thin printed solar cells (as seen in the video) are made from plastic and are flexible, lightweight and semi-transparent. This means they can be laminated onto windows and integrated into tents for either recreational or emergency relief purposes, to name just a few applications.

Let’s delve deeper into how the technology works and what this means for our future.

We use off-the-shelf equipment employing standard printing and coating techniques to make our flexible solar film. In some cases, we modify standard 3D printers to print our solar films. We can print a range sizes, from 1 cm wide all the way up to 30 cm wide. Our solar cells consist of five thin film layers over the top of each other – the thinnest is only around 20 nanometres thick! These thin film, flexible solar cells work in a similar way to conventional solar panels.

This technology can potentially be manufactured here in Australia, creating new opportunities for Australian manufacturing and value-adding to existing industries.

Show and tell on your screens

The gadgets Larry brought out on Q&A have so much potential for the future of clean energy here in Australia. We’ve done the heavy lifting where we’ve established the technology, so it’s ready for use right now.

We also have a wide range of projects in the pipeline which we’re hoping to implement in the near future. Take a look at the other ways we’re shaking up cleaner energy and finding more sustainable manufacturing practices.

Previous post:
Australia’s pristine beaches have a poo problem
Coming up next:
What kind of country will Australia be in 2060?