A whirlwind of hacking goodness shook things up with some exciting new ideas and some fierce competition over the weekend-long Melbourne Science Hackfest on 4-6 March. 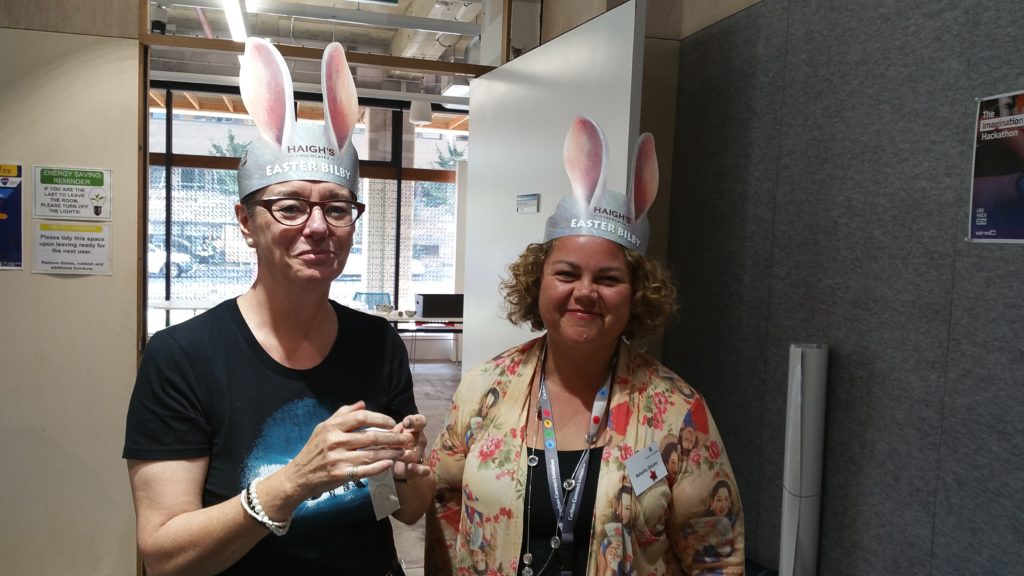 Two women with cardboard cutout Bilby ears on their heads.

CSIRO Executive Manager Information Services, Cynthia Love with Senior Data Management Specialist Natasha Simons getting into the Hackfest spirit, or should we say, Easter spirit! Wearing Bilby ears to represent some of the more environmental aspects of the data.

Who’s that hacking in Melbourne? Not your average hackers, that’s for sure. Unlike the malicious online types that get into your laptop and cause a world of pain, these hackers banded together to develop innovative new applications from science data.

This whirlwind of hacking goodness shook things up with some exciting new ideas and some fierce competition over the weekend-long Melbourne Science Hackfest on 4-6 March.

Our CSIRO team were excited to join forces with the likes of ANDS, NeCTAR, TERN, ALA, AURIN, RDS, AuScope, IMOS & University of Melbourne to organise and initiate an environment for a diverse group of around 60 hackers to ‘hack’ a range of data supplied by some of Australia’s biggest data collectors – ours included.

The massive array of datasets and ideas were sourced from the AURIN Portal, CSIRO’s Data Access Portal, GNS Science portal, AODN Ocean Data Portal, Atlas of Living Australia, AuScope portal and TERN portal (check out the full list here) and the hackers were left to roam free. Their challenge? To hack the supplied data and transform it into new and innovative ideas and outcomes where no hacker had gone before.

And when we say ‘hack’, we really mean it. These hackers got their hands dirty and went to town – they rummaged, picked it apart, broke it down and moulded these datasets like a blob of well used playdough. Best of all, they built it back up and created some really inspiring ideas and outcomes that confirmed our belief that collaboration is the key to innovation and we need to continue to promote and nurture the connection between data consumers and data providers. 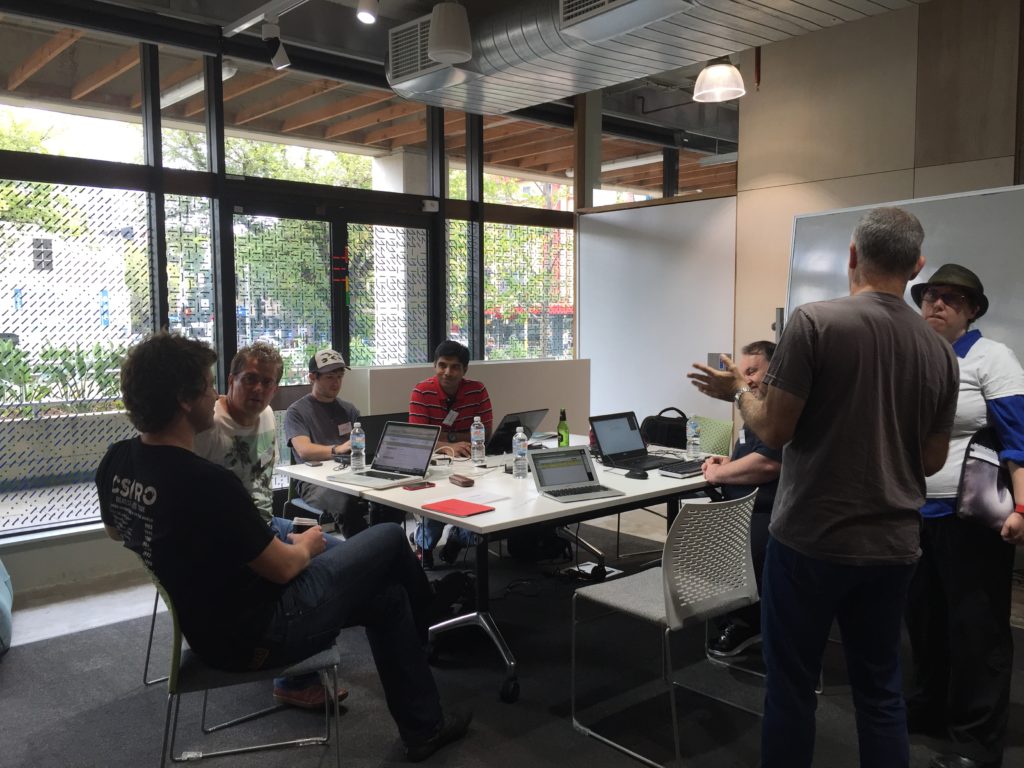 In the hack-pit, where dreams are made….or creative applications from data hacks.

Like every good event, Friday kicked off the Science Hackfest with some drinks and bit of speed dating…. that is, of course, some responsible drinking combined with a meet and greet.

Eight teams were then created with a variety of mentors including our very own Sue Cook, Dominic Hogan, Jess Robertson and Jens Klump, to support and guide the groups through the data and the opportunities, with a challenge to cooperate and develop their own innovative project from scratch.

After two days of intensive collaboration, the first place winners bagged $2,000 (sponsored by CSIRO) for their creation of the ‘Anomalyfinder’ tool – a ‘no-coding’ user friendly anomaly detection and mapping device.

While the competition was fierce, the results revealed the incredible value of both CSIRO and NCRIS data, and the significant role it can play in developing data products and knowledge systems that are useful to everyone from top scientific researchers to your average science enthusiast. 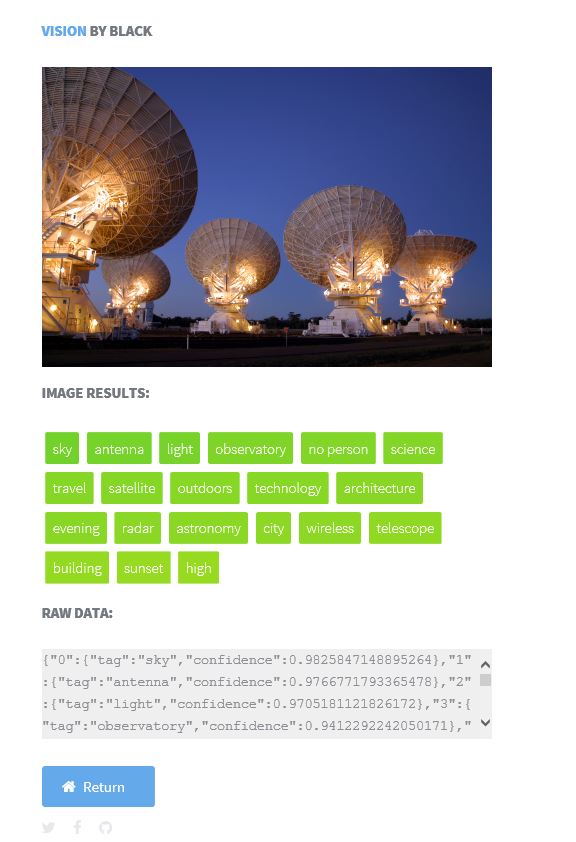 Image in, meta-data out – this image analysis hack could be a massive time-saver for database managers

A great example of the power of collaborative knowledge sharing demonstrated at the Hackfest was from team ‘Vision by Black’ whose clever hacker-brains identified a common challenge faced by data collectors in tagging, sorting and the classification of metadata for images.

By analysing and exploring what actually happens inside an image, the team were able to come up with a tool that automatically classifies the content of scientific and historic image data – pretty clever hey!

So how easy is it to use? – Simply upload your image and bam! – Just look at that sweet, sweet metadata spitting out at the other end!

Tools like this could be extremely helpful for data collectors such as the Atlas of living Australia (ALA) which provides an online data resource with access to a wealth of information and imagery uploaded by over 12,000 contributors. With 60 million records uploaded to the site, this tool could revolutionise the speed and accuracy of content classification for the ALA. 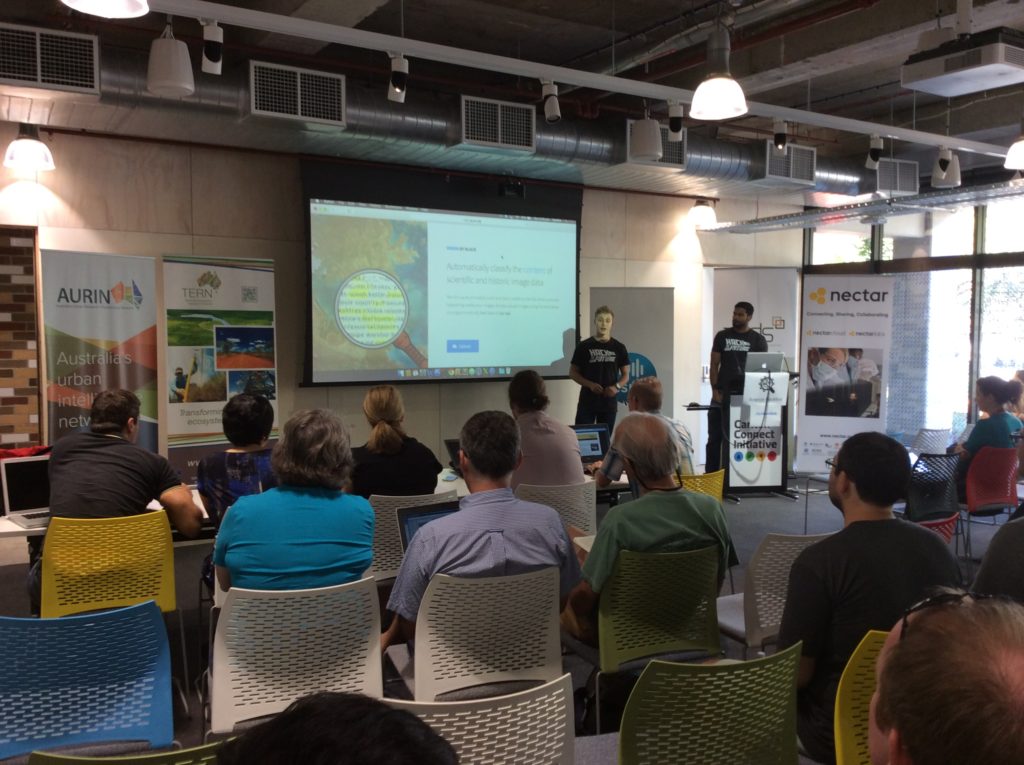 Image of a group of people being presented to in a large room with projection screen.

Similarly, it could be an invaluable tool for CSIRO’s own Science Image data base which could benefit by streamlining and simplifying the process of creating metadata for our 4,000-plus images.

So hats off to our enthusiastic young Melbourne Science Hackfest teams who may just turn out to be our next great team of Aussie innovators. Want to join in some hacking fun? Check out the Solar hackathon happening in April, and if that is not enough there is a GovHack in July.

Previous post:
What do WiFi and the dual flush toilet have in common? #100yearsinnovation
Coming up next:
Royal Entomological Society trumpet longhorn beetle book with prestigious medal