What makes a specialty coffee taste good? The science behind your morning cuppa

What makes a specialty coffee taste good? The science behind your morning cuppa

How was your morning cup of washed catuai? Or did you go for the natural bourbon to start your day? 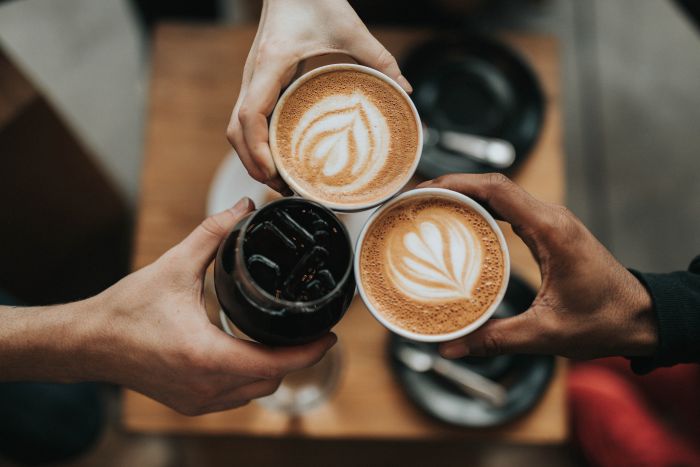 Cheers! Here's to the chemistry behind your morning pick-me-up. Unsplash: Nate Dumlao

Cheers! Here’s to the chemistry behind your morning pick-me-up. Unsplash: Nate Dumlao

Confused? You’re not alone. The world of specialty coffee is peppered with terms like “honey-processed”, “funky notes” and “first crack”.

But what do they mean — especially for the taste and aroma of your morning coffee?

Only recently has the coffee industry described their products in such depth, according to Melbourne roasting consultant Anne Cooper.

“The coffee industry is just starting to do what the wine industry has done forever,” she says.

But before we start decoding the jargon around specialty coffee, we first need a quick lesson in coffee anatomy. 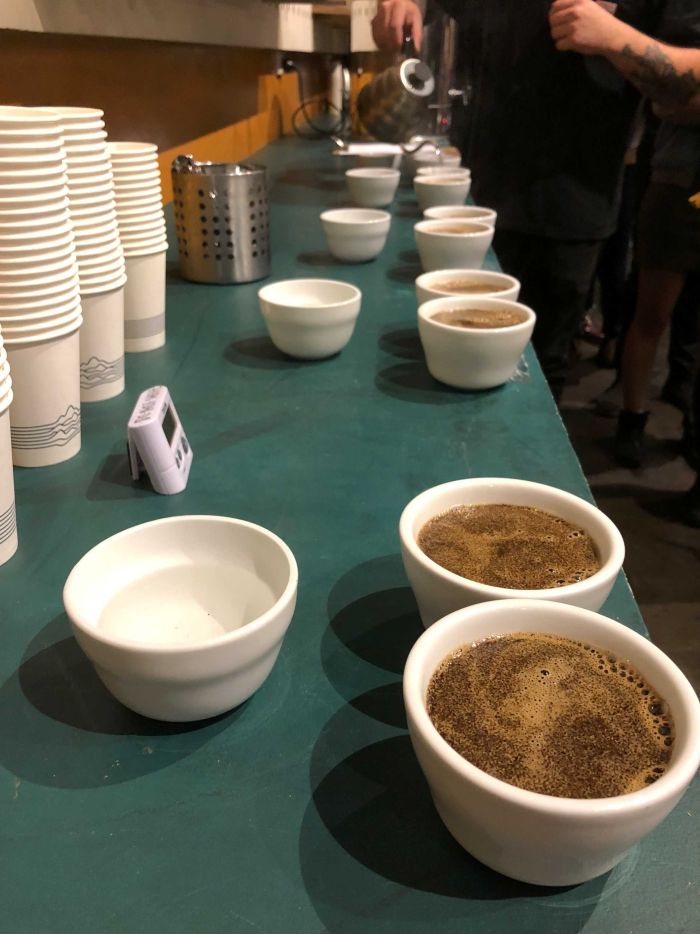 What we think of as coffee beans are actually the seeds of cherry-like coffee fruit.

Each cherry contains two seeds, which are coated by a thin parchment membrane and enveloped by a sticky, sweet layer called mucilage.

Nearly all specialty coffee comes from the Coffea arabica species.

Within this species are different types — including catuai, bourbon, gesha, catimor — all of which impart different flavours to their seeds.

The climate, soil, terrain and altitude where a coffee crop is grown can also affect taste.

Trees high in the mountains have slow-growing fruit, for instance, and tend to produce complex fruity, floral coffee, while faster-growing, low-altitude coffees are less acidic and taste earthier.

To get to the seeds within, coffee cherries are processed, often at the farm they were grown.

What’s up with washed, natural and honey processing?

Most specialty coffee on the market is washed.

“Once the cherry is picked, a de-pulping machine strips all the flesh off, leaving the seeds still in their mucilage coat,” Mr Parkes says.

The seeds are then soaked in big vats for a day or more. This has two jobs: to soak off the mucilage and to start fermentation.

Fermentation, Mr Parkes says, can produce sweetness in the coffee.

“But the key is to not over-ferment. If you have too much, you’ll end up with acetic acid, or vinegar,” he says.

Then the seeds are run through troughs to scrub the sticky mucilage off, and laid on patios or raised beds to dry.

Depending on the weather, drying can take a week or so.

“You want to get a 10 to 13 per cent moisture content in the seed before it’s packaged and sent off to a dry mill,” Mr Parkes says.

A dry mill removes the last remaining bits of mucilage and parchment membrane from the coffee seeds before they’re packaged up and sold.

“You pick the cherries straight off the tree, and you throw them on a patio or drying bed for a couple of week — maybe a month,” Mr Parkes said. 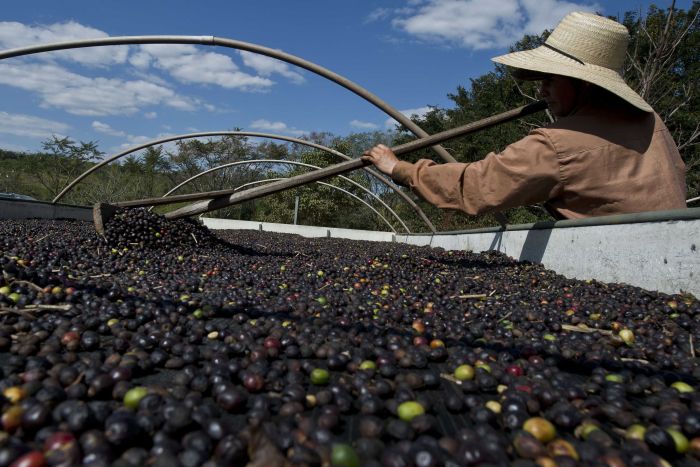 By allowing the coffee seeds to dry with the flesh and skin on, the seed, which is quite porous, absorbs sugars within the fruit.

“It gives natural sweetness to the coffee.”

This process also leads to quick fermentation, so extra care has to be taken to avoid a build up of acetic acid. Strong fruity flavours that are called ‘funky notes’ can also develop.

“If you have a natural Ethiopian, it can taste like really pungent blueberries if you get a really funky coffee,” Mr Parkes says.

“But there’s a fine line between funky and defective, so it can be open to interpretation.”

Once the fruit is dry, the pulp is removed and the coffee seeds are sent to the dry mill.

Then there’s honey processing, which is somewhere between the technique used to produce washed and natural coffee beans.

The cherry’s flesh is stripped away after it’s picked, as with washed coffees, but instead of being dunked in water, the mucilage-covered seeds are dried in the sun, as with natural coffees.

“So you get some of the sugars being absorbed by the seed, but not as much as the natural process,” Mr Parkes says.

Make the most of the roast

While the type of coffee plant, where it was grown and how it was processed all shapes the flavour of your long black, what happens in the roaster matters just as much, Ms Cooper says.

The heat of a roaster sets off a series of chemical reactions in the processed seeds, producing the coffee’s distinct taste and aroma.

When a batch of green beans arrive, they’re analysed for things such as moisture content and density to determine how long and at what temperature they should be roasted. 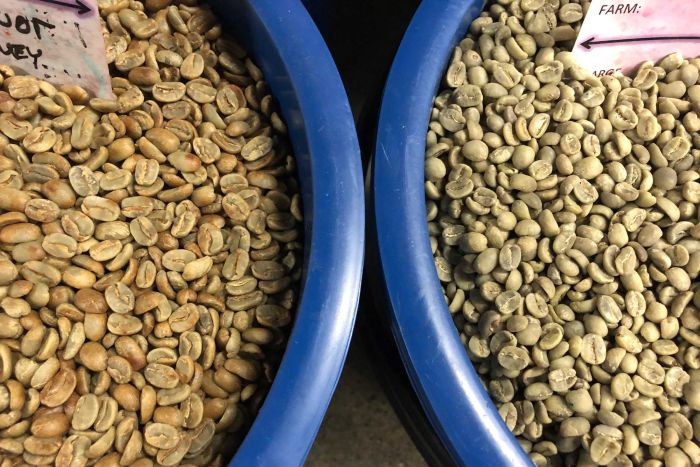 The green beans on the left were honey processed and still have a little parchment left on them. The beans on the right were washed. ABC News: Belinda Smith

The green beans on the left were honey processed and still have a little parchment left on them. The beans on the right were washed. ABC News: Belinda Smith

Once they’re heated in the roaster, water within the beans turn into steam and is forced out.

Chlorophyll — the molecule that gives plants their green colour — starts to degrade, turning the beans from green to a pale cream colour.

The Maillard reaction also begins, in which amino acids and sugars react to produce hundreds of new aromas and tastes.

“As [the Maillard reaction] continues, it branches.

“There are more than 1,000 compounds in coffee aroma.”

The longer the Maillard reaction is allowed to trundle along, the more complex the flavours.

The final part of the roast, Ms Cooper says, is all about balancing acids.

Water and gas that build up within the bean during the Maillard reaction burst free, leading to a rapid drop in pressure called the “first crack”.

This changes how quickly some chemical reactions take place. It’s also when acids begin to decompose.

The trick for roasters is to get rid of the undesirable acids, like vinegar, while keeping those they want.

If a roaster wants to bring out fruity notes, they’ll tweak the process make sure citric and malic acids — which give fruit its pleasant tang — don’t bust apart and disappear, Ms Cooper says.

But under-roast a coffee and you run the risk of strange flavours dominating.

“An under-roasted Kenyan tastes like tomato sauce,” she says.

Once roasted and packaged, the chemical reactions started by roasting continue.

So that little valve in a packet of coffee beans isn’t there so you can sniff them — although that’s a nice bonus. It’s there to allow carbon dioxide, produced by the beans in the packet, to hiss out. Otherwise, Dr Singh says, the bag could explode.

Finally, is there any truth to the idea that a stronger and more bitter tasting dark roasted coffee will give you more of a caffeine hit than a light roasted one?

Not according to Ms Cooper, who says caffeine levels stay pretty much constant throughout the roasting process.

So there’s the low down on some of the most commonly used jargon in the specialty coffee business.

Now you can enjoy your next honey-processed bourbon, knowing what’s contributed to the abundance of flavours in your mug.

This article was originally published on ABC Science.  Read the original article.

Previous post:
One fish, two fish, what is this new fish?
Coming up next:
Making it personal – how your home could help power the electricity grid