A quick explainer piece on supercritical steam, what we're doing with it, and why it's so important to the future of energy generation in Australia. 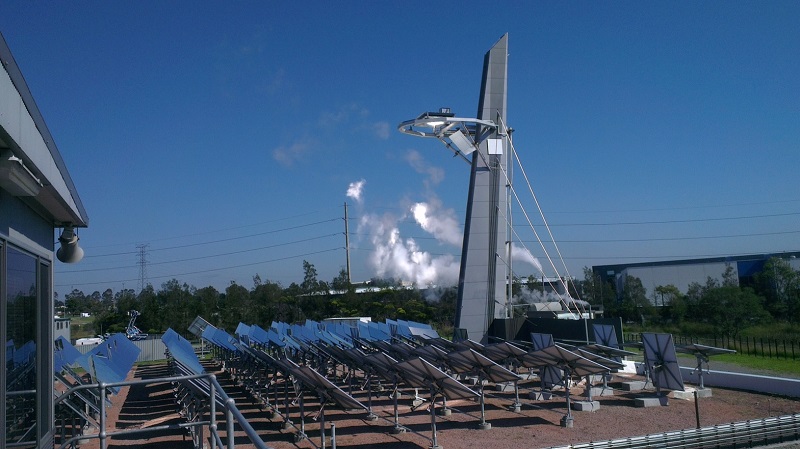 A supercritical steam demonstration at our solar field.

Back in June 2014 a team of engineers and  scientists at our Energy Centre in Newcastle were responsible for a breakthrough that made news across the world: they used solar technology to create ‘supercritical’ steam at the hottest temperatures ever, outside of fossil fuel sources. They demonstrated that the power plants of the future could run using the free, zero emission energy of the sun to achieve the same result as traditional coal-fired plants.

It was an amazing achievement that has the potential to revolutionise our energy future, and we’re still proud as punch of it. But, hang on a second…

Just what is supercritical steam?

Well, good question. And ten points for asking. But before we answer it, first let’s take a a refresher course on how electricity is made.

Many of us will remember generating electromagnetic induction in the class room by moving a magnet through a wire coil. Well, large power stations create electricity using this same principle. A spinning turbine rotates a giant magnet around a piece of wire to create a magnetic field, which electrifies the wire. The wire’s current is then sent out through high voltage transformers to power lines that eventually end up in your street, powering your home.

Ahhh, but what makes it supercritical?

We know that regular steam is powerful enough to run train engines, and we’ve seen its pressure lift the lid on a boiling saucepan. But steam is considered to be supercritical once its pressure and temperature pushes it past the critical point into a phase where water and vapour coexist (if your saucepan was able to create supercritical steam it would never boil but just keeping getting hotter and less dense). Because supercritical steam is hotter and under more pressure than regular power station steam, it is able to release more energy to the power station, which converts more heat into usable electricity.

High temperatures, like those generated from burning fossil fuels such as coal, are required to get steam to this point, however, burning fossil fuels is neither good for our environment nor sustainable. So we need to think about other, more sustainable and cost effective ways of heating water to the point of powerful supercritical steam.

By concentrating solar rays with mirrors (or heliostats) to a central receiver point, our team were able to produce the same quality steam as that used in supercritical power stations. This is a world first, due to the extreme conditions required to achieve this breakthrough. The supercritical steam can directly displace fossil fuelled steam within an existing power station, or one day have turbines of its own. 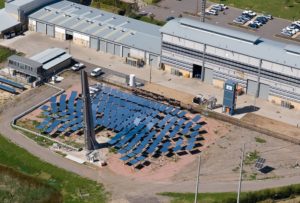 One of our two solar thermal towers at our Newcastle Energy Centre.

The $5.68 million research program that delivered this breakthrough has been looking at better ways of storing solar power, with the support of the Australian Renewable Energy Agency (ARENA) and in collaboration with the largest supplier of solar thermal electricity in the world, Abengoa Solar.

The work in Newcastle has been so successful that we’ve now installed similar solar thermal fields in Greece and Japan.

Work continues on solarising high pressure and high temperature power cycles. We’re working with Australian industry, helping them replace fossil fuelled boilers for steam production with solar boilers. Thanks to this breakthrough, free zero-emission energy is a step closer to becoming a reality.

Previous post:
What are IMOS doing in the Southern Ocean?
Coming up next:
Wind, solar, coal and gas to reach similar costs by 2030: report