We've been using biocontrol to weed out some of Australia's worst plant pests, including the widespread Crofton weed on Lord Howe Island. 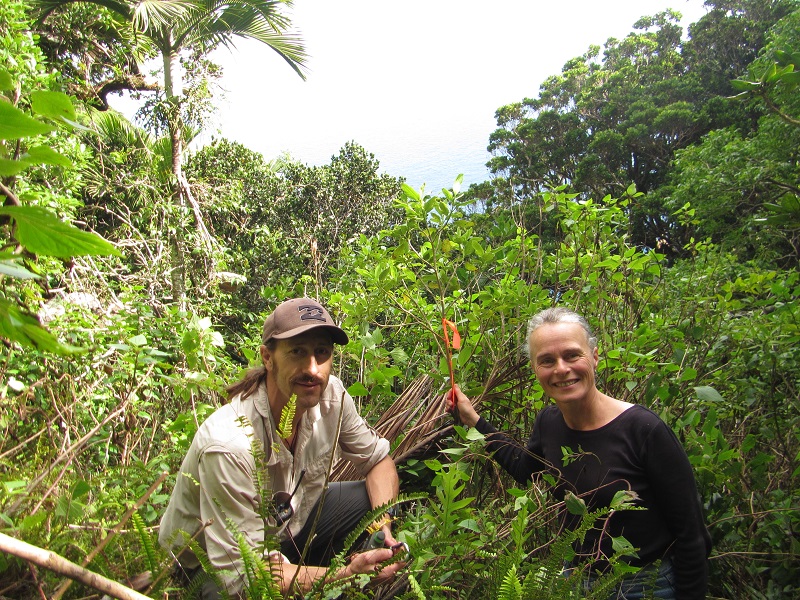 For most of us, when we hear about weeds we think of those annoying plants that spring up in our flower beds or veggie patches. The ones that either aren’t pretty or can’t be eaten, and so become another chore on every green thumb’s weekend to do list.

Now imagine these garden interlopers on a much larger scale. Instead of your garden under threat it is Australia’s natural ecosystems and agricultural industry that are at risk, with the costs of widespread exotic weeds to Australian agriculture in excess of $6 billion a year. To add to the problem, many invasive weeds are pre-adapted to modern agricultural practices and are becoming increasingly herbicide resistant.

We’ve been looking into ways to manage these weeds and limit their impacts. One of our most successful methods is biological control or ‘biocontrol’, which involves using the weeds’ own enemies against them. These biocontrol agents can be pathogenic or herbivorous organisms, such as fungi and insects.

Biocontrol agents are highly specific and usually found in the native home range of the invasive weeds, which is why they generally don’t run rampant in their own backyard. To be allowed entry into Australia, a candidate biocontrol agent is independently assessed using internationally-recognised protocols. We undertake extensive safety testing to assess whether a potential biocontrol agent poses any risk to ornamental, agricultural and native species.

Biocontrol has a number of advantages as a method for managing invasive weeds, including being cost effective and environmentally benign because when it works it does not require reapplication like herbicides. Most biocontrol agents for weeds, once established, are self-sustaining and don’t have to be reapplied.

Our biocontrol research and release programs have been very successful in controlling invasive weeds in Australia. Here’s a roundup of our top pest plant purges: 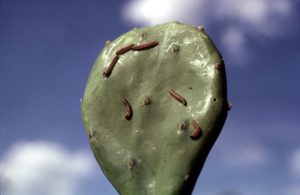 Larvae of Cactoblastis cactorum beginning to feed on a prickley pear fruit.

The plant was introduced into Australia in the late 1770s and grown in a few areas of NSW and Queensland until it became invasive after rapidly spreading following the flood of 1893. By 1900 prickly pear infestations covered 10 million acres, and by 1920 it had spread to nearly 60 million acres – that’s the size of Victoria!

Early investigative work into chemical control of prickly pear established that best results were achieved by using arsenic pentoxide. But although this chemical was effective, it was also highly toxic, expensive and hazardous to people and stock.

Biocontrol was initiated in the early 1900s and the prickly pear moth, Cactoblastis cactorum, was introduced in 1926 from the pear’s native home in the Americas. Within 10 years, the once-dense fields of common prickly pear lay rotting or had vanished completely.

Paterson’s curse (also called Salvation Jane) was one of Australia’s worst and most costly agricultural broadleaf weeds from the early 1970’s, infesting 33 million ha. By 2001 it was costing agriculture $90 million a year through toxicity to livestock and horses, reduced pasture productivity, control costs and reduced land values. Its high seed production (thousands of seeds per square metre), seed longevity of more than seven years and an ability to germinate at any time of year, given the right conditions, contribute to making it such a persistent weed.

In 1991 we led a national biocontrol program looking at six different options for biocontrol of Paterson’s curse. This weed is so hardy, we found it took the combined efforts of several biocontrol agents to deliver the best results. This dream team included a leaf-mining moth, crown weevil, root weevil, flea beetle, flower beetle and the stem-boring beetle. Each of these attack different parts of the plant and at different stages of its life cycle.

The implementation phase of the program was a national collaborative effort across the five southern states of Australia. It was an innovative approach, as for the first time we put the biocontrol agents and their redistribution into the hands of thousand’s farmers from 2000 through to 2006. Ten years later we can see the success of this large scale biocontrol program, with more than $1B worth of benefits for the grazing industries, including reduced control costs, reduced animal deaths and increased pasture and therefore livestock productivity, improved land values and improved social wellbeing in the affected farmer communities across the country. 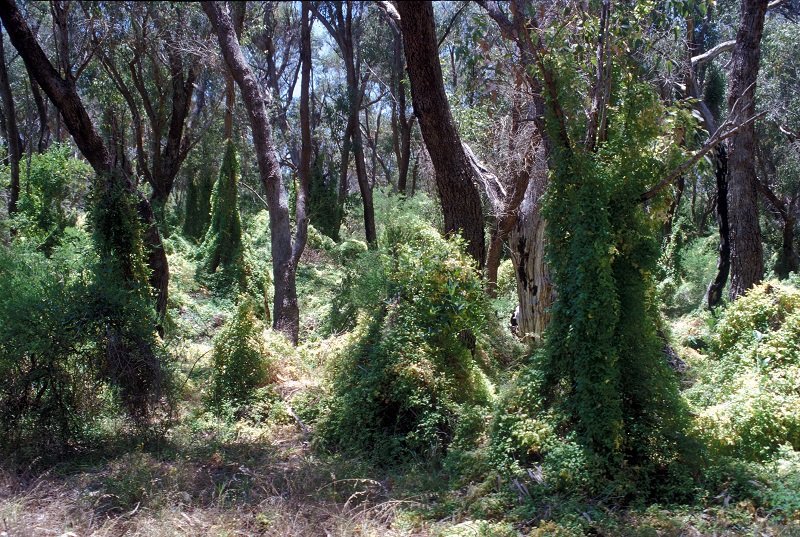 This scrambling weed from South Africa invaded Australia’s warm temperate climates and threatened a number of native species. It also proved to be a particular problem in citrus orchards.

Herbicides, hand weeding and slashing were being used to try to control Bridal creeper, however these methods were expensive, costing up to $2,000 per ha per year.  In addition some of the infestation sites were inaccessible, making these control methods unsuitable.

We began work on biological control options in the late 1980s, looking for natural enemies of bridal creeper in South Africa. Following research and testing we identified three potential biocontrol agents – undescribed Erythroneurini leaf-hopper, rust fungus and Crioceris sp. leaf beetle. All three were imported to Australian containment facilities to undergo further testing, and were approved for release between 1999 and 2002. Unfortunately the leaf-beetle did not establish successfully, however the leaf-hopper and rust fungus worked in tandem at most sites, causing severe damage to the extensive foliage. This dynamic duo have had a major impact in reducing bridal creeper populations throughout Australian coastal ecosystems.

Also known as sticky snakeroot or Mexican devil – Crofton weed has been smothering native bush in Australia since the early 1900s, when it escaped from gardens in Sydney. It has since go on to invade agricultural lands as well as 150 reserves across NSW, reducing the ecological value of bush land, threatening several vulnerable or endangered native species and also affecting grazing land on farms by diminishing their carrying capacity. 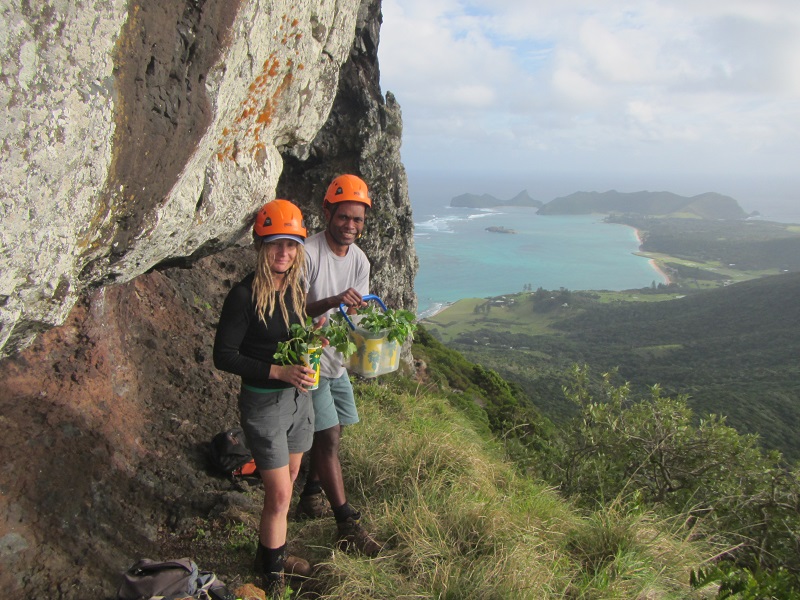 Rigorous testing showed that the Crofton weed rust fungus (Baeodromus eupatorii) from Mexico was safe for release in Australia and likely to be an effective biocontrol agent. The fungus infects the young leaves and stems of the plant, stunting development and disrupting its ability to reproduce.

Our research team is currently leading a large-scale release program of the rust fungus in partnership with land managers in eastern NSW. This biocontrol agent is proving so promising on mainland NSW that we have now released it on Lord Howe Island to help save the World Heritage listed environment from being overrun by this pesky weed.

Find out more about our work managing invasive species in Australia.