Observations made by our Australia Telescope Compact Array have provided the ‘coup dé grace’ of evidence in the discovery of a unique pair of stars, proving for the first time that white dwarf stars do emit pulsating radiation. 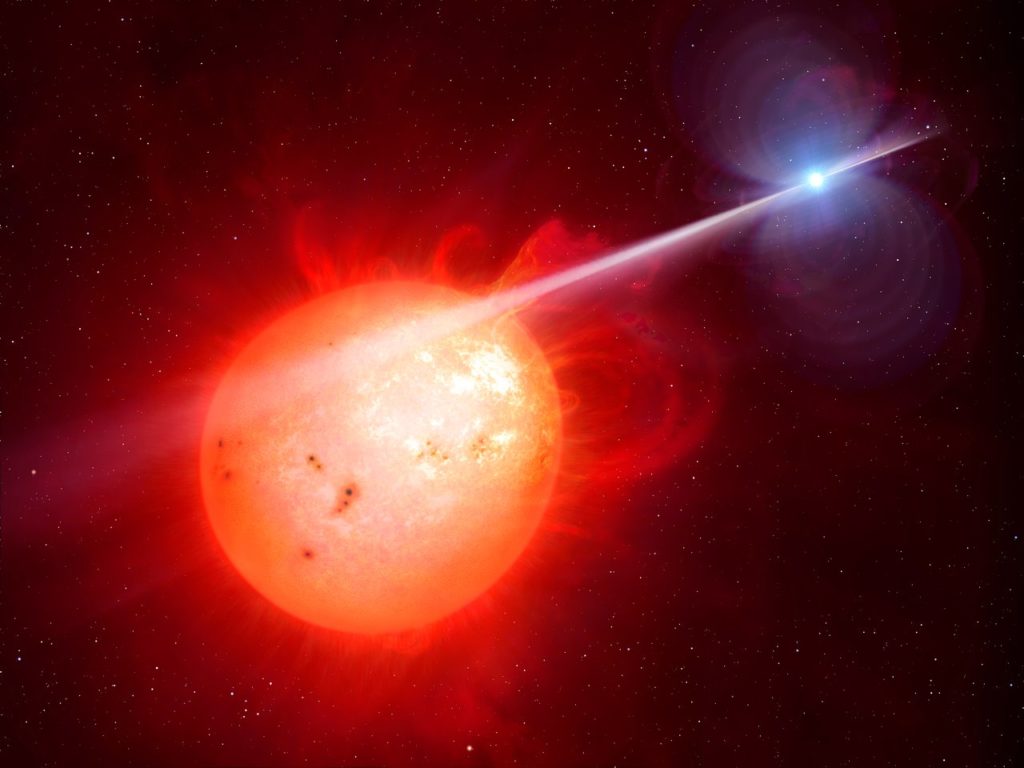 A couple of stars have been caught behaving badly — and our Australia Telescope Compact Array (ATCA) was key in revealing what they are up to.

Observations made by ATCA have provided the ‘coup dé grace’ of evidence in the discovery of a unique pair of stars, proving for the first time that white dwarf stars do emit pulsating radiation.

The ATCA is an array of six 22-metre antennas used for radio astronomy, about 25 km west of the town of Narrabri, NSW. It was from this location that Dr Jamie Stevens conducted some radio observations for an international team being led by researchers from the University of Warwick.

Using the European Southern Observatory’s (ESO) very large telescope, the astronomers have discovered a new type of exotic binary star, in which a white dwarf star powers electrons up to almost the speed of light. These high energy particles release blasts of radiation in a lighthouse-like beam which lash the companion red dwarf star, and cause the entire system to pulse dramatically every 1.97 minutes.

The source of the electrons is a mystery: it’s not clear if they are associated with the white dwarf itself or with its cooler companion.

No other binary white dwarf systems are known to show this kind of pulsation. But cases of pulsing neutron stars – an even more condensed kind of star – have been known for 50 years. Are they caused by the same mechanism? Nobody knows.

The star system known as AR Scorpii, or AR Sco for short, lies 380 light-years from Earth, towards the constellation Scorpius. It was first observed in the early 1970’s and its regular fluctuations in brightness led it to be incorrectly classified as a lone ‘variable star’. 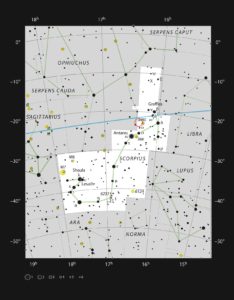 This chart shows the location of the exotic binary star AR Scorpii in the bright constellation of Scorpius (The Scorpion).

We now know it contains a rapidly spinning white dwarf star the size of Earth, only 200 000 times more massive, and a cool red dwarf star companion one third the mass of the Sun, orbiting one another every 3.6 hours.

An exciting part of the new discovery is that the powerful ‘lighthouse-like’ blasts include radiation at radio frequencies, which has never been detected before from a white dwarf system. Astronomers have known about pulsing neutron stars for a long time and there have been theories that white dwarfs could behave similarly, but now they have the evidence.

The radio frequency observations from the ATCA have provided the complimentary evidence that the AR Sco star system is a radio source as well as confirming the 2-minute spin pulsations observed by other telescopes. Our important contribution to this discovery demonstrates the value of the compact array, the only radio telescope in the southern hemisphere that operates at the radio frequencies required to observe this unique and exciting system.

This research ‘A radio pulsing white dwarf binary star’ was published this week in Nature.

Want to find out more about the ATCA? Then check out our website!