Warming in the Tasman Sea a global warming hot spot

Warming in the Tasman Sea a global warming hot spot

Oceanographers have identified a series of ocean hotspots around the world generated by strengthening wind systems that have driven oceanic currents, including the East Australian Current, polewards beyond their known boundaries.

The hotspots have formed alongside ocean currents that wash the east coast of the major continents and their warming proceeds at a rate far exceeding the average rate of ocean surface warming, according to an international science team whose work is published in the journal Nature Climate Change today. 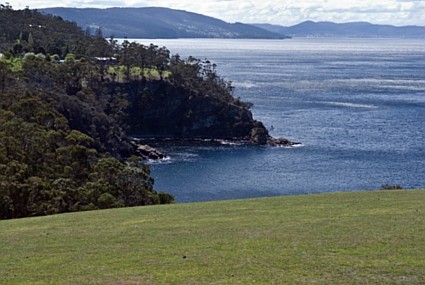 Paper co-author, CSIRO’s Dr Wenju Cai, said that while the finding has local ecological implications in the region surrounding the hotspots, the major influence is upon the ocean’s ability to take up heat and carbon from the atmosphere.

In Australia’s case, scientists report intensifying east-west winds at high latitudes (45º-55ºS) pushing southward and speeding up the gyre or swirl of currents circulating in the South Pacific, extending from South America to the Australian coast.  The resulting changes in ocean circulation patterns have pushed the East Australian Current around 350 kilometres further south, with temperatures east of Tasmania as much as two degrees warmer than they were 60 years ago.

“We would expect natural change in the oceans over decades or centuries but change with such elevated sea surface temperatures in a growing number of locations and in a synchronised manner was definitely not expected,” said CSIRO’s Dr Wenju Cai.

“Detecting these changes has been hindered by limited observations but with a combination of multi-national ocean watch systems and computer simulations we have been able to reconstruct an ocean history in which warming over the past century is 2-3 times faster than the global average ocean warming rate,” says Dr Cai, a climate scientist at CSIRO’s Wealth from Oceans Research Flagship.

The changes are characterised by a combination of currents pushing nearer to the polar regions and intensify with systematic changes of wind over both hemispheres, attributed to increasing greenhouse gases.

Dr Cai said the increase of carbon dioxide and other greenhouse gases in the atmosphere has been the major driver of the surface warming of the Earth over the 20th century. This is projected to continue.

He said the research points to the need for a long-term monitoring network of the western boundary currents. In March next year, Australian scientists plan to deploy a series of moored ocean sensors across the East Australian Current to observe change season-to-season and year-to-year.

Lead author of the paper was Dr Lixin Wu, of the Ocean University of China, with contributing authors from five countries, many of whom are members of the Pacific Ocean Panel working under the auspices of the World Meteorological Organisation.

Below are some questions from readers of this post and some answers from Dr Cai. Hope they help.

Given that recent research suggests an acceleration in circumpolar winds and a cooling trend in the Antarctic shouldn’t we see significant warming in the mid-latitudes with increased tropical export and reduced polar transport?

Are we merely looking at a simple rearrangement of earth’s thermal furniture rather than a net increase in temperature?

A: It is a combination of both. We see an increase in global ocean averaged temperature as well.

The reason I distinguish this from “global warming” is that the increased circumpolar circulation could be responsible not only for declining Antarctic temperatures but a slowing of thermal egress from the tropics and hence the warmer Tasman.

This rearrangement of the thermal furniture can deliver an increase in surface (sensible) heat without necessarily adding a single joule to the net earth system and thus no “global warming” whatsoever, despite increases in locally measured readings.

A: We have unambiguous evidence showing a net increase in ocean heat content due to global warming.

Don’t believe rearranging heat distribution around the globe can dramatically affect apparent temperature? Check out the global variation demonstrated by El Niño and La Niña phases of the ENSO, all achieved without a massive or even measurable change in incoming solar radiation.

Over what period has the study been conducted ?

A: Since 1900. For the first time century-scale trends are calculated showing synchronised warming along major oceanic currents.

Here are some thoughts that could add to your considerations

I think the ozone layer/hole and its origin through UV insulation and its influence on high altitude and high latitude winds has a lot to do with this phenomenon.

A: That is right. Over the period since 1979, ozone depletion dominates. However, before 1979, increasing CO2 played a part.

Climate change is probably in the mix , but from my reading, the incoming charged particles (both solar and Cosmic) are driving the ozone formation/ destruction is more fundamental.

This Nature article got me thinking along these lines

It seems that almost any weather phenomenon can be attributed by researchers to greenhouse gases, in particular carbon dioxide. No proof is needed! Whatever happened to the scientific method that I learned about many years ago? Over the last 50 years the CO2 content of the atmosphere has increased by 100 ppm. This equates to one ten thousandth part of the atmosphere! Exactly how this can drive the climate has never been demonstrated quantitatively by any scientist. Does anyone think that the great ball of fire in the sky, aka The Sun, could have anything to do with the climate?
Scientists should be starting with the FACTS and deducing their conclusions from them.