Consider this. Every day thousands of spectacular flashes emitting as much energy in a millisecond as our sun does in 10,000 years are taking place all across the sky. Despite being astonishingly powerful they are also elusive, with just 16 detected since first discovered by our Parkes telescope in 2007.

Now, for the first time, scientists have pinpointed the location of a fast radio burst (FRB), confirming that they originate in the distant Universe. This particular burst, cutely named FRB 150418, happened a long time ago in a galaxy far, far away. It’s taken six billion years for the afterglow to reach us.

“We’ve always thought that fast radio bursts were very far away but this discovery proves it,” Dr Simon Johnston, our Head of Astrophysics and a member of the research team said.

“It’s important for two main reasons. Firstly it opens the door to understanding what causes these mysterious bursts, and secondly it proves that we can use FRBs to do cosmology and test what our Universe is made up of,” he said.

How to make a Universe

Astronomers think that dark energy, an invisible force that has been causing the Universe to expand since the Big Bang, makes up about 70 per cent of the cosmos. Roughly 25 per cent is comprised of dark matter, another shady character that we can’t see but know it’s there by inference, as something is forcing galaxies to spin faster than they should.

Still following? Sort of? Ok, let’s bring things back down to earth.

Look around you. Everything you see, the sun, the moon, the stars, your fridge, Justin Bieber, the tree in your garden, the Sydney Opera House, your pet labradoodle. All of this stuff is known as ordinary matter and accounts for the remaining five per cent of the Universe. But when scientists add all this matter together there is only half as much as should be there – the rest is missing.

“We’ve found the missing ordinary matter,” Dr Johnston said. “By pinpointing the distance to the FRB we can measure how dense the material is between the point of origin and Earth, essentially allowing us to weigh the Universe, or at least the normal matter it contains.”

Does my bum look big in this?

Constantly getting bigger, our Universe has been letting itself go a bit for the past 14 billion years. But how much does it weigh?

“The Universe is so incomprehensively massive that it boggles the mind even of astronomers to think about!,” Dr Johnston said.

(A bit of non-peer reviewed research by the author has found that the entire mass of the observable Universe, both dark and ordinary matter, is about 100 septendecillion grams. That’s roughly 25 billion galaxies the size of the Milky Way. Or, lots and lots of blue whales).

Most fast radio bursts have been found by sifting through recorded data months or even years after it was taken, by which time it was too late to detect its location. The international research team behind this project developed a system to detect FRBs within seconds, immediately alerting other telescopes with a view to pinpointing their location.

So moments after the Parkes telescope detected the new burst on 18 April 2015, our Compact Array telescope, 400 km north of Parkes, homed in on the patch of sky the flash had come from. It saw a radio source that lasted for six days before fading — the FRB’s radio afterglow. This let the researchers zoom in on the fast radio burst about 1000 times more precisely than any of the 16 previously detected bursts. 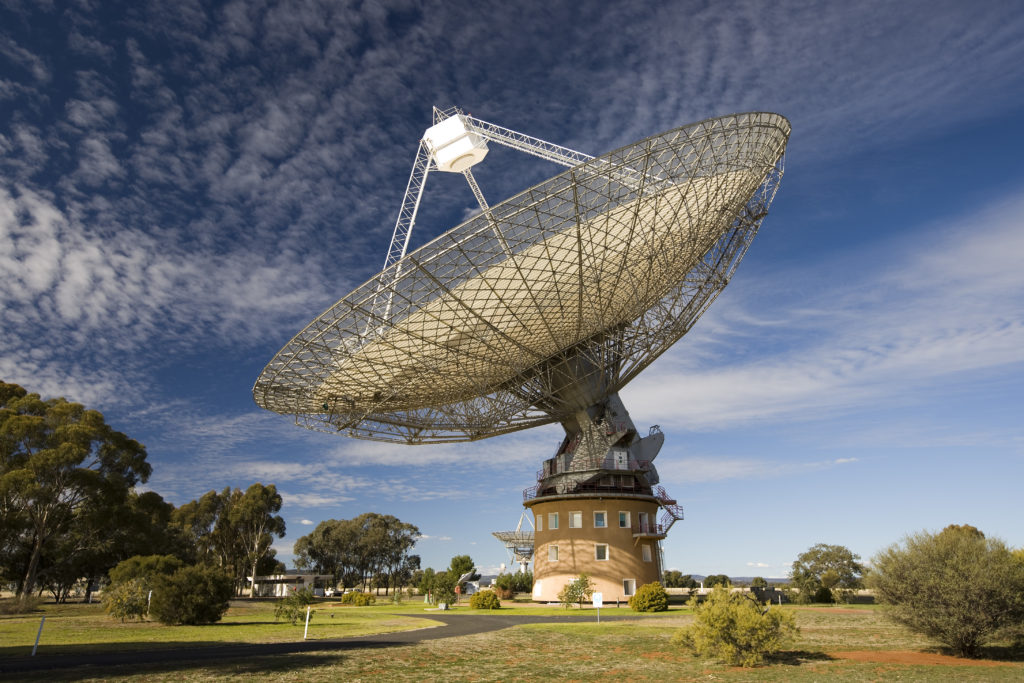 Picture of a large telescope on a sunny day with a blue-sky background.

Our Parkes telescope was the first to detect the fast radio burst. © David McClenaghan

Meanwhile, in Hawaii the 8.2m optical Subaru telescope was also at work. Looking at the FRB field, it found a galaxy that could be matched with the radio source seen by the Compact Array. 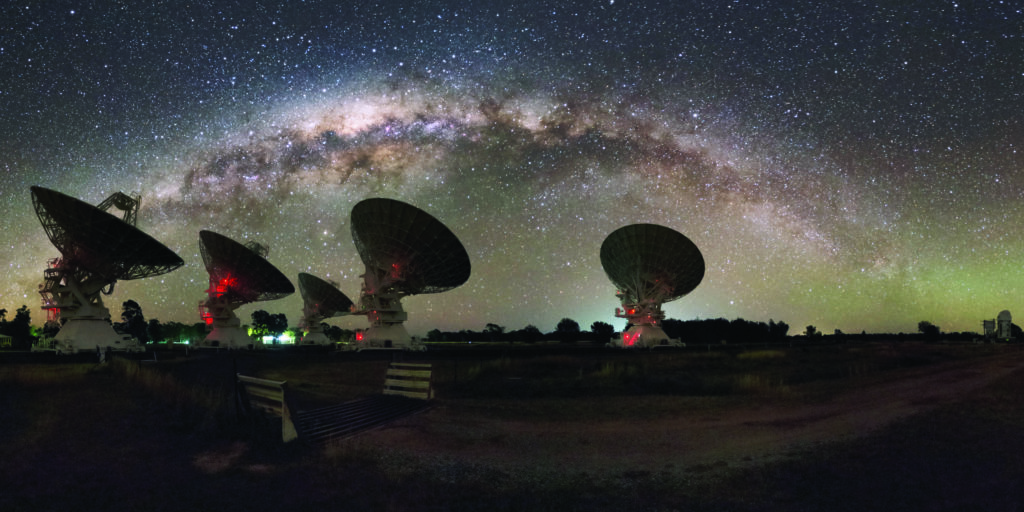 More sleuthing showed that this object was an elliptical galaxy — a huge football-shaped mass of stars six billion light-years away.

“The galaxy is old, well past its prime period for star formation, which isn’t what we expected,” Dr Johnston said.

“It might mean that the FRB resulted from, say, two neutron stars colliding rather than anything to do with recent star birth. But there could be more than one road to a fast radio burst.”

In the near future, our Australian SKA Pathfinder (ASKAP) should be an ideal instrument for detecting FRBs.

“We expect to find several a week, and really clean up,” said Dr Johnston.

The findings of this latest research were published in the journal Nature today. You can read more here.