The seventh megatrend: why Australia must embrace innovation

The seventh megatrend: why Australia must embrace innovation

An emerging new “megatrend” is that Australia’s scientists and researchers need to be more innovative, particularly if the country is to play a significant role in the world’s economy.

Megatrends are deep-set trajectories of change that will reshape the landscape for government, business and society over the coming 20 years. They herald both challenge and opportunity.

The term was minted by the American John Naisbitt in his 1982 book, Megatrends. Today megatrends are used by organisations such as CSIRO, KPMG, Boston Consulting Group, Price Waterhouse Coopers, the United States National Intelligence Council and many others.

Back in 2012, at CSIRO we identified six global megatrends that would substantially change the way people live in Australia.

They told a story of natural resource scarcity in a growing world, pressures on biodiversity and the global climate, a changing world economy, an ageing population and escalating healthcare costs, the rise of the digital economy and the all-important experience factor for consumers, societies and individuals.

Many of these themes remain but after three years the story is changing. New topics include the rise of artificial intelligence, structural change within the Chinese and East-Asian economies, the era of big data and digital disruption to name a few.

We have identified an additional, seventh megatrend, known as “the innovation imperative”, which I have detailed in a new CSIRO book titled Global Megatrends.

This megatrend argues that Australia and advanced economies are in a tight spot and the only way out involves risk-taking, new ideas and blue-sky scientific research.

Promising areas for such research and development include regenerative and personalised medicine, energy storage, artificial intelligence, autonomous systems and informatics. But the innovation imperative cuts across all fields of scientific research and human endeavour.

Why does innovation matter more today? The main reason is that we generated wealth last century by doing some clever things – mostly basic things such as exploiting high grade and easily accessible mineral ore deposits, or opening up new areas of land.

Now we’ve done all the basic things we need to do clever, and very clever, things.

Tyler Cowen is a professor in economics at George Mason University who argues that productivity decline is happening in advanced economies because we have run out of ideas. The title of his 2011 book gives much away about his thesis – it’s called The Great Stagnation – How America Ate All the Low-Hanging Fruit of Modern History, Got Sick, and Will (Eventually) Feel Better.

Cowen tells a story of declining productivity because, according to The Economist, the “ideas machine” may have broken down.

The fuel source for growth in an advanced economy is no longer land, minerals or water. The fuel source of a modern economy is ideas. That’s because ideas are how industry achieves more output for the same or fewer inputs.

When multiplied across the economy, ideas allow us to increase productivity – the ratio of inputs to outputs in a production process. Productivity is an underlying driver of wealth creation. Productivity improvements ultimately mean we can raise people’s incomes.

In his book The Age of Diminished Expectations: U.S. Economic Policy in the 1990s, the economics Nobel Prize laureate Paul Krugman is famous for saying:

Productivity isn’t everything, but in the long run it is almost everything. A country’s ability to improve its standard of living over time depends almost entirely on its ability to raise its output per worker.

Does this situation apply to Australia? Data compiled by the Australian Bureau of Statistics show that productivity has experienced a sustained period of strong growth over the latter part of last century and into the beginning of this century. 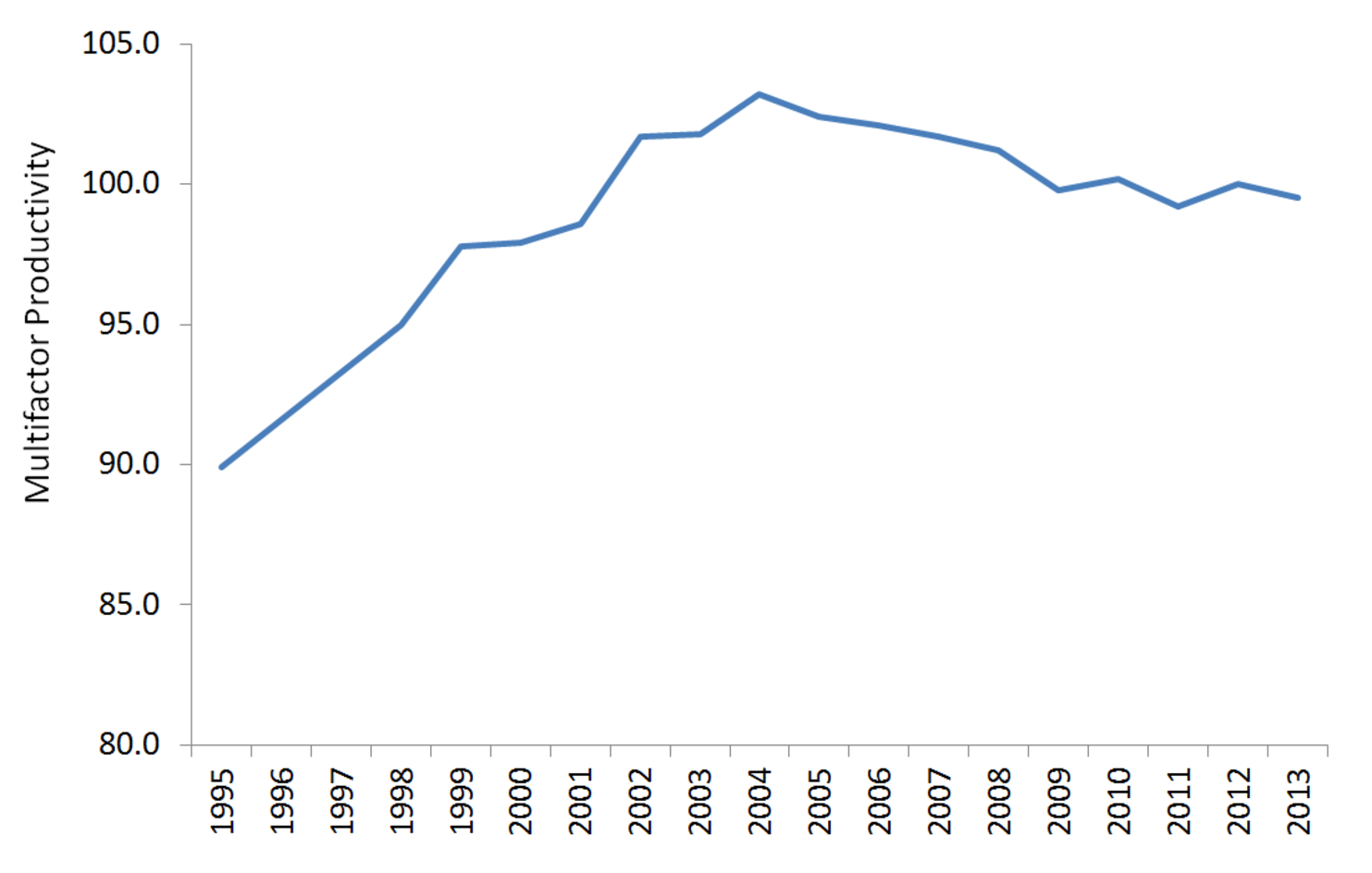 Multifactor productivity for all industries in the Australian economy. Australian Bureau of Statistics

But at around 2004 it hits a peak. After that it starts to decline. There are some questions about how alarmed we should be about productivity decline and whether it’s a cyclical phenomenon or a sustained slump.

Regardless of how these questions are answered the overwhelming view is that it would be much better for the Australian economy (and people’s incomes) if this graph resumed an upward-sloping trend. And quickly.

And the future looks…?

But the future is not that bleak. At least it doesn’t need to be. Tyler Cowen’s book title ends with the words “… and Will (Eventually) Feel Better”. A return to productivity growth can and will happen in Australia as well.

It will be achieved by a return to deeper innovation. Our rapidly changing world means what was once a bold idea is now mundane. Bold and new ideas will come from fundamental research that helps us understand how physical and social systems operate.

This will allow us to identify radically new and improved ways of manufacturing goods, extracting resources and doing everything industry does better.

We need to build new industries connecting to new export markets. The World Economic Forum argues that digital technologies combined with rapid income growth in emerging Asian economies sets the scene for a boom in knowledge and creative industries.

To capture these opportunities Australia needs to breathe new life into our innovation system. To continue to grow our economy and create wealth for future generations we are faced with an imperative to innovate like never before.

Dr Stefan Hajkowicz will be speaking about the megatrends and the innovation imperative at the Australia 2040 Summit at Parliament House in Canberra on May 26, 2015.