We co-developed the ‘lab-on-a-glove’, which can detect a group of nerve agent OP compounds found in some pesticides, while in the field. 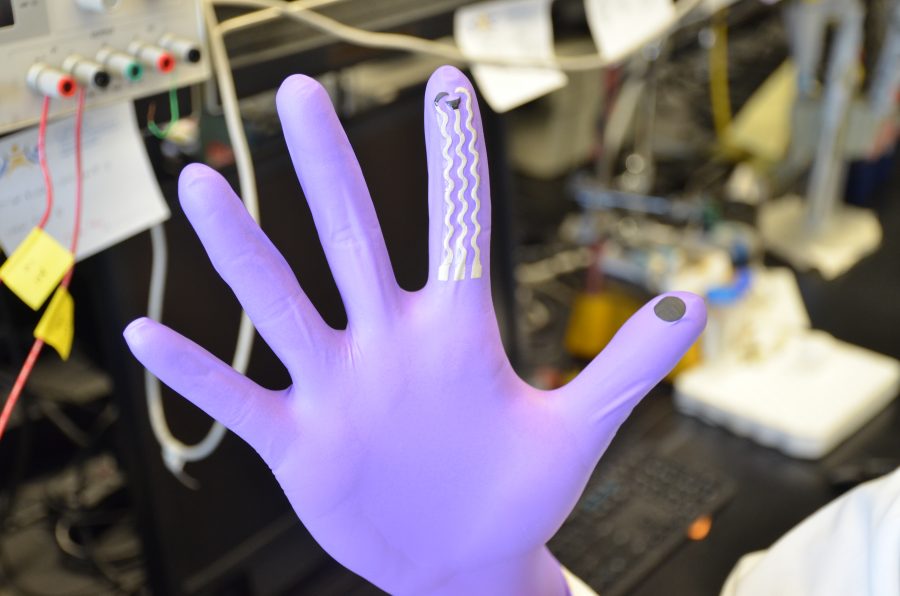 Remember that classic Brothers Grimm tale where a vain and embittered queen makes various attempts at murdering her beautiful young step daughter, Snow White? The queen hires a mercenary to slaughter Snow White, and after that fails, attempts to strangle the girl with her own hands. Finally, the insidious queen laces an apple and gives it to Snow White to eat.

Savvy, and with her thumb on the pulse of our latest research, Snow White swiftly stretches on her organophosphate (OP)-sensing ‘lab-on-a-glove’ and analyses the apple to find traces of a toxic OP nerve agent that causes death via asphyxiation from lung muscle paralysis. Snow White calls the police for an attempt on her life, has the queen thrown away, and heads back for a celebratory piss-up with her diminutive house mates, the dwarves.

Alas, such technology wasn’t around in the 1700s, but, in collaboration with the University of California, San Diego (UCSD), our researchers have devised just such a marvel: a ‘lab-on-a-glove’.

The glove detects dangerous OP compounds. Yes, that’s right – a wearable device that scans for toxic chemicals simply by swiping. We take it stirred, not shaken.

The glove is a wearable chemical sensor that can single-handedly identify OP compounds present on surfaces and agricultural products.

OP compounds are a group of toxic phosphorus-containing organic chemicals that can be found in nerve agents like sarin, and some pesticides. They work by attacking the nervous systems of humans and insects. In 1995, Aum Shinrikyo terrorists famously released sarin on the Tokyo subway, killing 12 people.

The ‘lab-on-a-glove’ was designed specifically with the defence and forensic industries in mind, providing reliable, real-time and on-site chemical screening for rapid response to terror threats. But this clever device might also be useful in the food security industry to screen for contaminated food at the farm gate.

So how does it work? 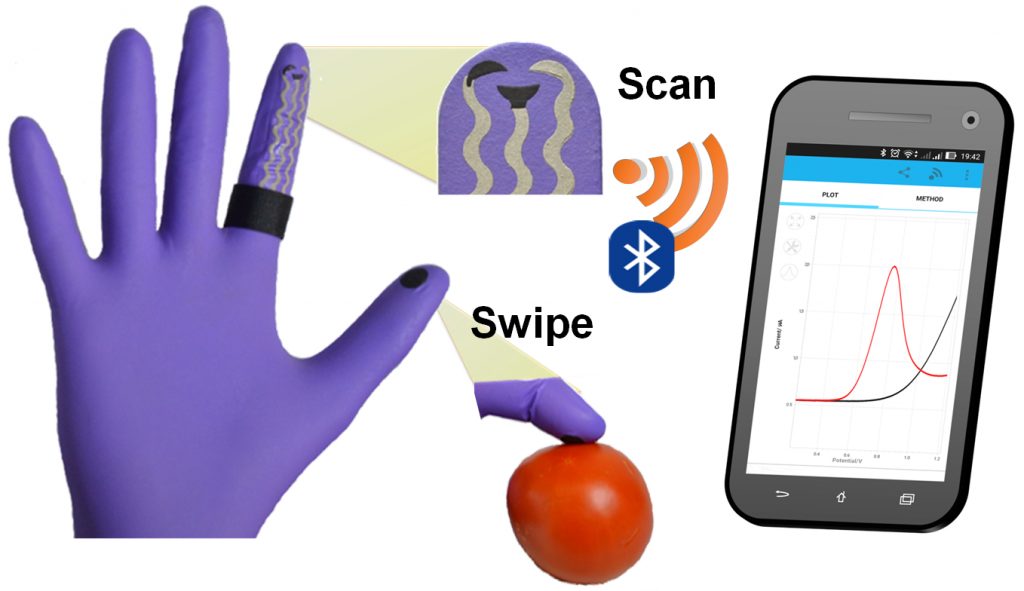 diagram of how the glove works

The lab-on-a-glove uses a printed carbon pad on the thump to swipe for nerve agents. A special stretchable ink is printed onto the index finger in a serpentine design, ideal for stretching. The glove uses enzyme-based biosensors to detect OP nerve agents and integrated electronics to analyse the sample. Image: University of California, San Diego

It uses specially designed stretchable inks that can flex with the typical movement expected from pulling on and using a glove. The electrical circuitry and sensors embedded in the ink are flexible enough to withstand extreme operating conditions.

Once on the wearer’s hand, the entire process is very intuitive, almost as familiar as the thumb-forefinger rub we see in a Hollywood dust-swipe and roll. On the thumb of the glove is a printed carbon pad used to collect nerve agent residues from suspect samples by swiping (left or right – it doesn’t matter!). On the index finger is a biosensor containing an enzyme that reacts with OP compounds, which acts as a scanner. In true Bond style, contact between the thumb and index finger activates the scan and provides an electrochemical analysis of the sample. How cool is that!

With the help of a miniature ‘potentiostat’ measuring device attached to the back of the hand and connected to the index finger via a ring bandage, the analysis is wirelessly transmitted to a smartphone. Boom! Rapid results display.

The team are now focusing on further miniaturising the electronics and developing new sensors that can screen for other target compounds.

This work was recently published in ACS Sensors.

You can read more about our work with sensors here.