Helping to unlock the mysteries of the deep, Investigator offers researchers the opportunity to observe the weird, wonderful and often unseen life of our oceans. 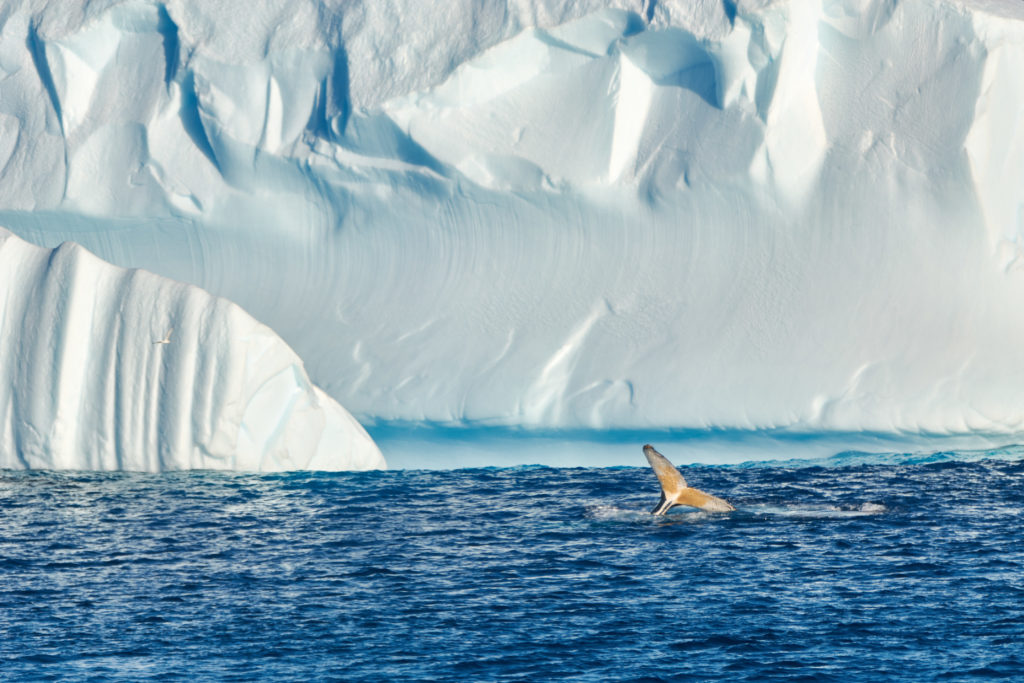 A whale frolics in Antarctic waters while feeding on krill near an iceberg. Image Diego Cotterle.

A whale frolics in Antarctic waters while feeding on krill near an iceberg. Image Diego Cotterle.

Oceans, the blue frontier. Teeming with life that is weird, wonderful and often unseen due to distance and depth. Helping to unlock the mysteries of life above and below the waves, Investigator voyages provide an important opportunity to collect information about the distribution and abundance of life – big and small – in our oceans. Sea birds, seals, whales, rays, penguins, dolphins, fish, sea snakes, sharks, dugongs – all and more have been encountered on Investigator voyages over the past two years.

So what have we seen out at sea lately?

Dr Eric Woehler, from BirdLife Tasmania and University of Tasmania, joined Investigator’s most recent voyage to the Southern Ocean to gather data about the distribution and abundance of sea birds. While at sea, Eric made another interesting sighting when a sizeable pod of long-finned pilot whales was spotted.

“We saw the pod a number of times, with the whales approaching the vessel rapidly on the first two occasions and remaining within 100 metres for several minutes before heading off,” said Eric.

“We estimated the pod to be in excess of 150 animals, with both adults and calves being seen.”

Long-finned pilot whales are a wide-spread species in the Southern Ocean but such large pods are not frequently seen. 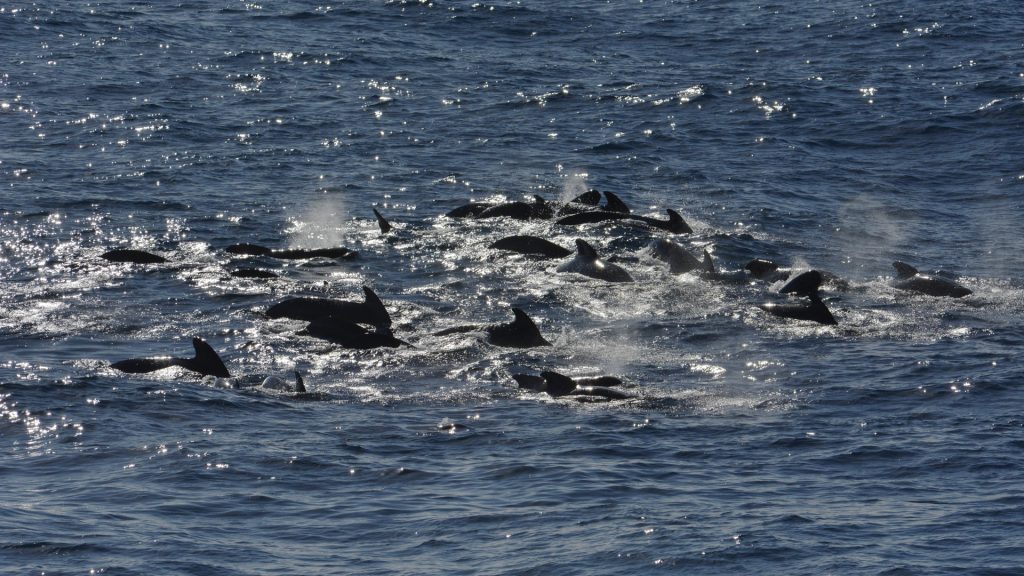 A pod of long-finned pilot whales seen from Investigator during a recent voyage to the Southern Ocean. Image Eric Woehler.

A pod of long-finned pilot whales seen from Investigator during a recent voyage to the Southern Ocean. Image Eric Woehler. 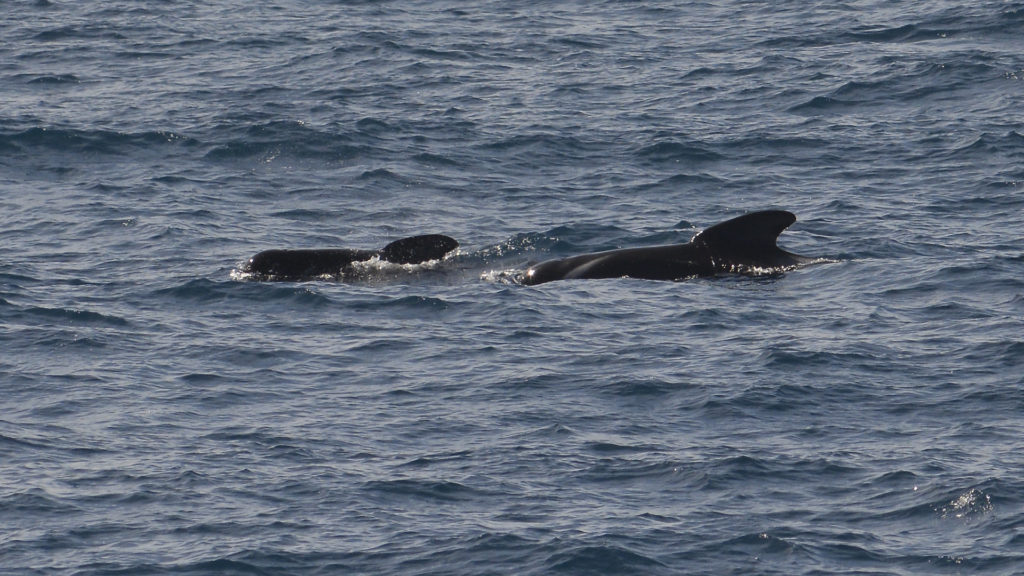 Both adults and calves were spotted in the pod estimated at over 150 animals. Image Eric Woehler.

The nearness of the whales and the length of their visit ensured good estimates of their numbers and of the calves present. It was a similar ‘whale-tale’ for those on Investigator’s voyage into Antarctic waters in early 2017, with a bounty of close-up marine life sightings that included repeated ship-side visits by some inquisitive humpback whales. A range of other animal observations, gathered both from targeted research and opportunistically during the voyage, have also provided valuable data for increasing our understanding of life in this harsh and remote marine environment. 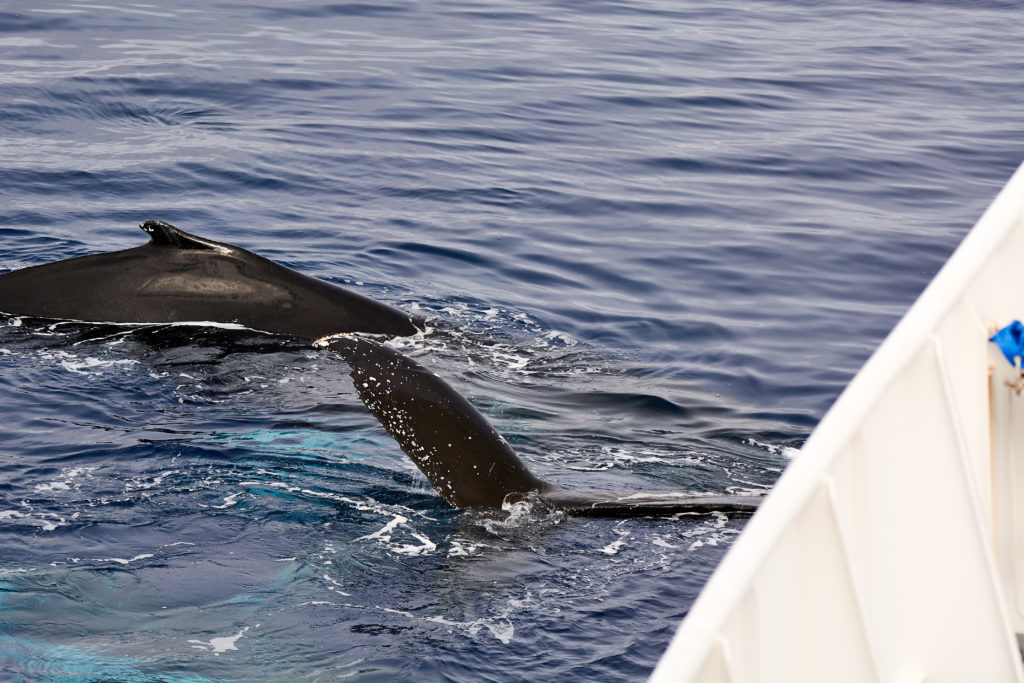 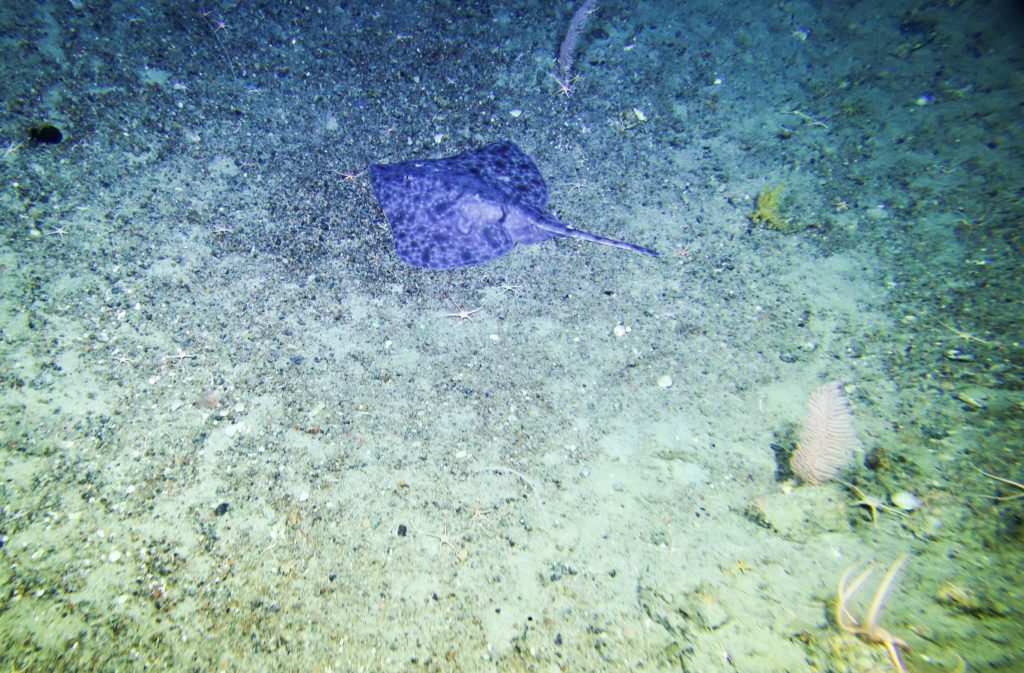 Deep camera tow surveys uncover an amazing a-ray of life on the Antarctic sea floor, including dozens of brittle stars and other starfish cousins. 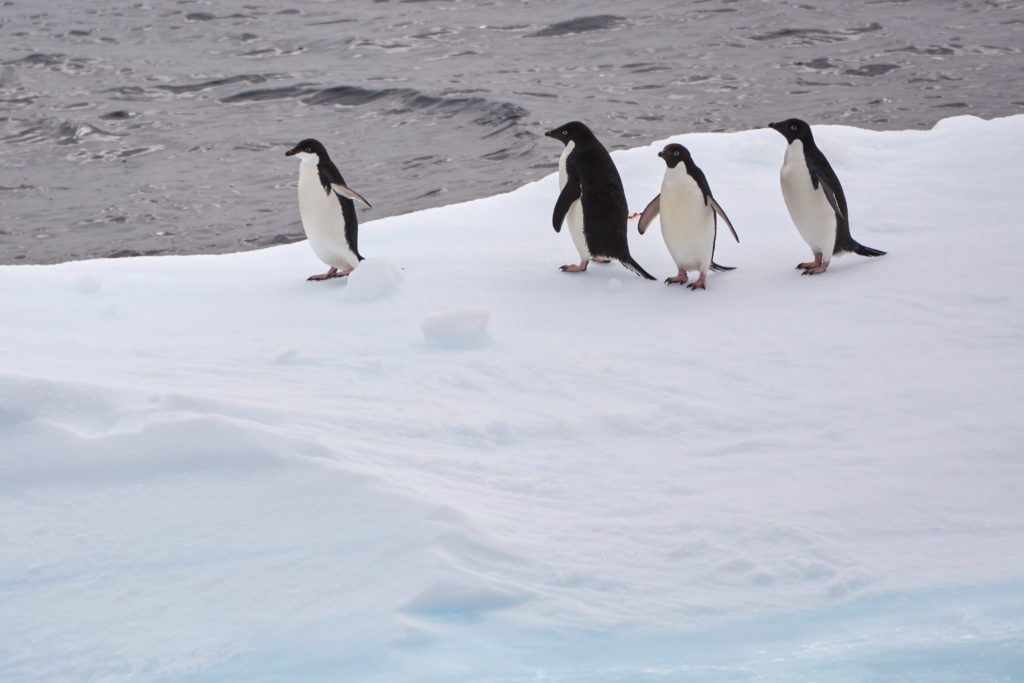 Another sighting made on Investigator’s recent voyage revealed a remarkable story of life in the Southern Ocean. A Gibson’s albatross, a sub-species of wandering albatross that breeds on the Auckland Islands south of New Zealand, was observed near the ship and seen to have a colour band on its leg. The bird stayed with Investigator for the best part of two days, teasing those on board by never approaching too closely but not being out of sight for too long.

With a bit of luck and patience, Dr Eric Woehler and his team were able to snap a photo of the colour band and identify the bird. What follows is the remarkable story of Gibson’s albatross ‘43G’. 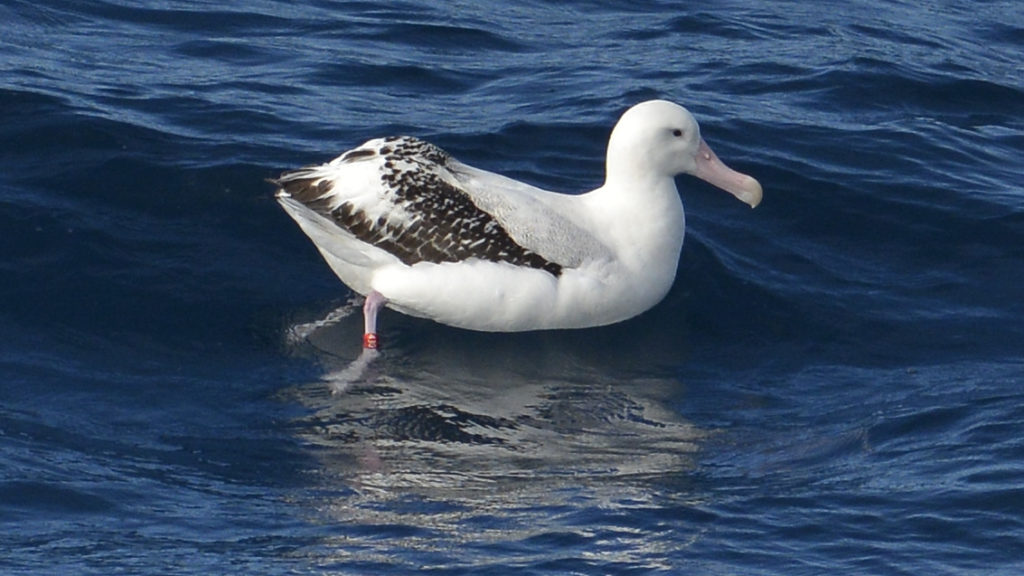 43G was banded by a New Zealand research team on Adams Island, one of the Auckland Islands, as a breeding adult back in 1991. Eric and his team contacted the New Zealand researchers, who were pleased to hear that 43G had been spotted alive and well. They told Eric the bird was at least 10-20 years old when it was banded, meaning it was now at least 36 years old but more likely 46 years or more!

A good innings for an albatross and we guess it just goes to show, if you have a band you will go places!

Discovering life down in the deep

Unlike 43G, much of the life in our oceans is not so easily found floating on the surface and researchers have to carry out targeted surveys to find out what lies beneath the waves. They can do this using sonar, deep water cameras or by collecting specimens using equipment such as nets, dredges and corers.

And sometimes animals appear when least expected! On the recent voyage, researchers calibrating a new multi-beam acoustics platform used to investigate deep water life were surprised by a squid attack!

These random encounters with life in our oceans provide valuable observations about not only animal distribution and abundance, but also about their behaviour. 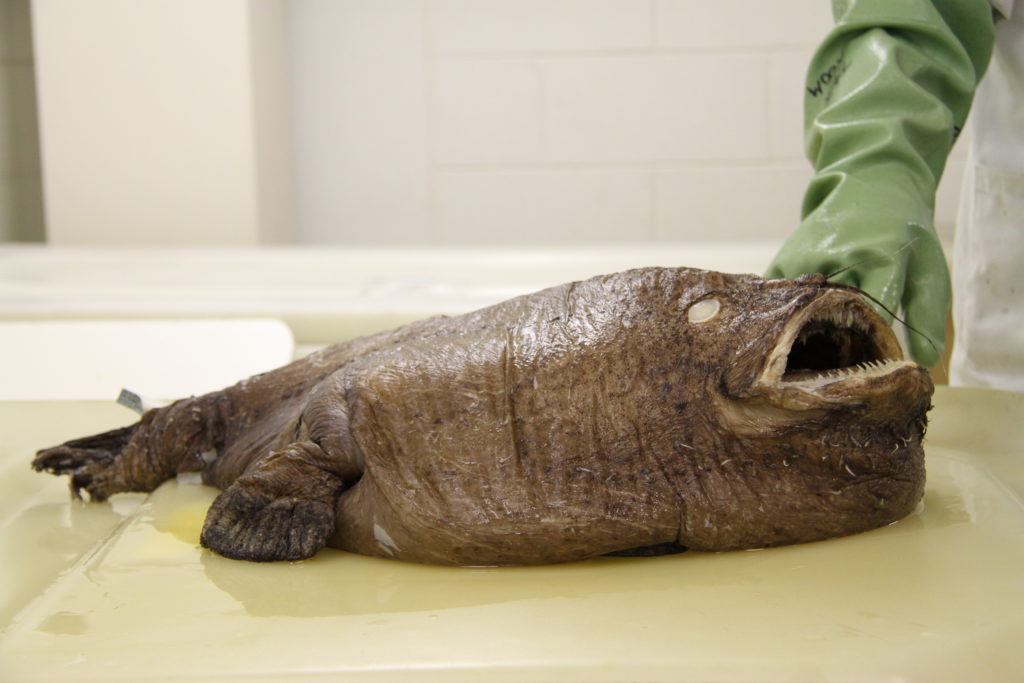 Blerg! A face not even a mother could love! A monkfish in the Australian National Fish Collection.

Where deep sea animals are collected on a voyage, some will be retained and end up in museums, universities and collections across Australia. When it comes to fish specimens, many of these are curated in the Australian National Fish Collection (ANFC) in Hobart. This collection of Australia’s marine biodiversity is a vital resource that supports research to improve our understanding of our marine fish and fisheries.

Fish in this collection become famous! Scientists from around the world visit the collection and borrow material for examination, and to make comparisons with fish from other regions. The ANFC currently holds more than 150 000 fish specimens, representing some 3 400 species.

Where do all the data go?

Recording animal observations during voyages is important for increasing our understanding of the marine environment, particularly as Investigator often boldly takes researchers to remote regions of our oceans where few researchers have gone before. At the end of the day, all observations and specimens are collected for one primary purpose – to provide useful data for research and policy making.

One of the foundation principles of the Marine National Facility, which owns and operates Investigator, is that all data must be open access and made freely available to all within 12 months of a research or transit voyage. Resources like the Atlas of Living Australia (ALA), a facility hosted by us, are vital for making these data accessible to all.

The ALA is Australia’s national biodiversity database and contains more than 67 million records based on specimens, field observations and surveys. It combines biodiversity data from multiple sources, and makes it freely available and usable online. In short, the ALA is made up of records contributed by Australia’s academic, scientific, and environmental communities, as well as by you! 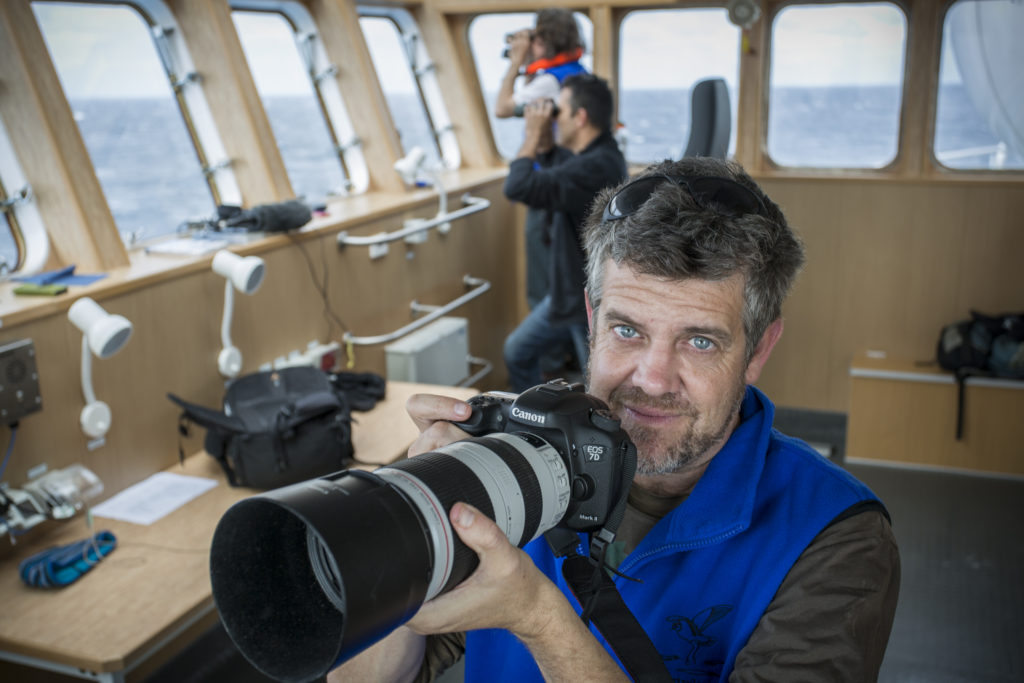 An eye to the future

While technology provides a force multiplier for research, the trusty old human eye still has an important role to play in making observations about life in the world around us. Every voyage of Investigator offers the opportunity for all on board to make and record sightings, and contribute to increasing knowledge about the amazing life found in our vast oceans.

Find out more about contributing to Australia’s national biodiversity database – the Atlas of Living Australia.

Previous post:
Cloud, backup and storage devices: how best to protect your data
Coming up next:
Lab-on-a-glove: Swipe left on nerve agents