Did you catch our marvellous clip of a surprise squid attack? Here it is, and here's the story behind the footage.

Did you catch our stunning and mysterious squid clip? We were certainly surprised by the overwhelming interest and response!

Earlier this year, our research vessel Investigator was on a voyage in the Southern Ocean to maintain deep-water moorings that collect long-term climate and carbon cycle data, when one of the science teams aboard captured striking footage of a squid attack. At the time, the team were deploying a new acoustic optical profiling system designed to study ‘micronekton’, the mid-water sea life including small fish, crustaceans, jellyfish and squid that bridges the gap between surface-level plankton and deeper carnivorous food webs.

Watching the footage, did you find yourself asking ‘What’s going on?’

Okay, what is going on?

Well, after speaking with marine biologists and squid experts in Australia and the world over — our National Collections, the Australian Museum, the Smithsonian — we can definitively say that we don’t know!

Weird, huh? We don’t know…but, of course, we have some ideas.

In science we make an observation, like this video, and then we construct ‘hypotheses’ or stories to explain what we observe. Some hypotheses are a little more likely than others, and these are the top three we think are most likely for what we are seeing in our squid video:

1) it could be an individual cannibalising a member of the same species,

What our three hypotheses tell us is that the oceans are vast and full of mystery. Pause for a moment and consider how we don’t currently have enough understanding of life in the Southern Ocean to identify the species or even genus of squid in this video.

Imagine you are an alien watching footage: a primate walks over to a table with food on it when, suddenly, a second primate lunges from the side, biting into the neck of the first, dragging them off scene. Gender? Not sure. Sexual or predatory? Not sure. Chimp, gorilla, or human? Not sure. Family? Yes — hominid.

What we can definitely tell you is that the first squid was mistaken if it thought it was getting a free lunch — the line in the video is an equipment calibration line with distance markers on it, not bait! 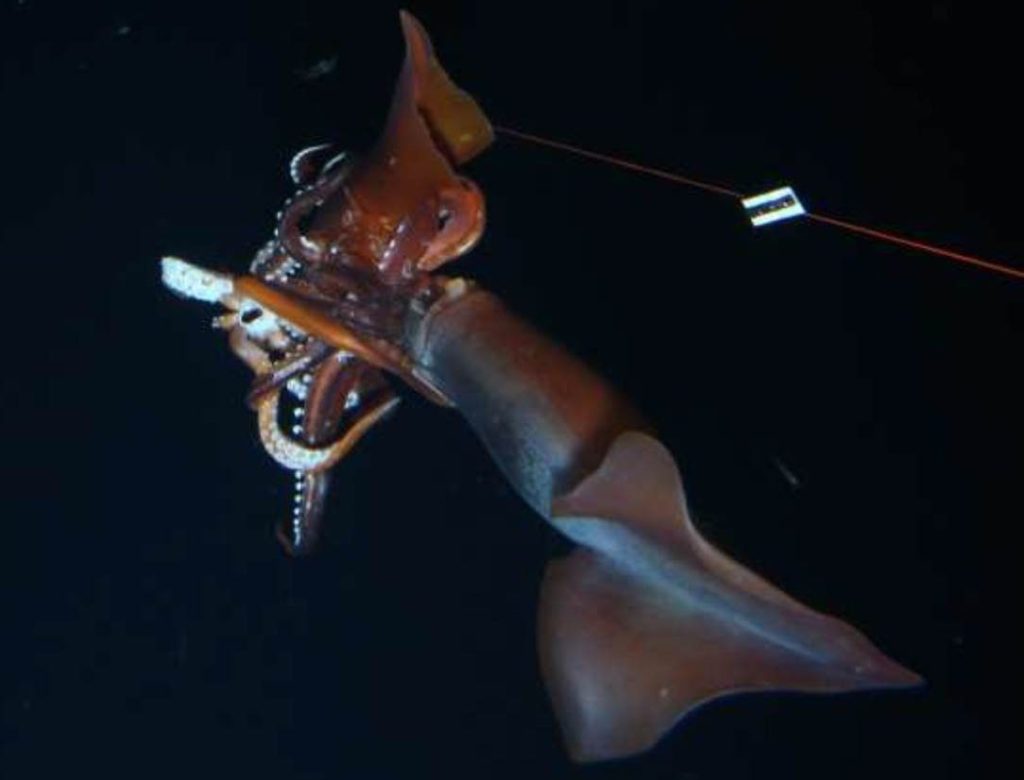 Identities of the characters

To find out the squid family ties we got in touch with Dr Mandy Reid at the Australian Museum. Mandy is the Collection Manager of Molluscs, the family that includes soft-bodied animals like snails, oysters, octopuses and, of course, squids. Mandy identified both squid as likely belonging to the family ‘Ommastrephidae’, which includes such wonders as the Japanese flying squid and the Humboldt squid, the latter growing up to 1.5 metres in length (not including the tentacles). To accurately identify the species, Mandy says, “The anatomical details need to be examined in ways that are not always possible to do from live animal footage.”

For example, microscopes may need to be used to identify the arrangement of suckers to determine the species or genus.

Ok, they’re Ommastrephids, but what are they doing?

So we’ve got some confidence that they’re in the same family – Ommastrephidae – but this doesn’t help narrow down any of our three hypotheses. Mandy, from the Australian Museum, has made a tentative guess and thinks that they may be different species. Michael Vecchione, a contact from The Smithsonian, suggested the squids are engaging in either sex or predation, but given the ferocity with which they’re ‘hugging’ and the fact that the feeding tentacles are visible, makes it more likely to be predation.

Snoop Squid and Beakie Smalls aren’t a part of the Ommastrephidae.

Every piece of research contributes to our understanding of the world, and helps us form — and more accurately test — our hypotheses. Here’s Mandy on the research:

“This is where CSIRO’s Southern Ocean program is so valuable. Many of the findings are new to science and are adding significantly to our knowledge base. Every new and additional observation will make future identifications easier. For example, if footage can be matched to captured specimens, it will be much easier to become more confident with species identifications in future and therefore learn more about their behaviour.”

So let’s finish by saying that the ink hasn’t yet dried on the telling of this story!

To keep up to date with our knowledge-expanding research, specifically that on board research vessel Investigator, click here.