We’re sitting firmly in the Top 25 Global Innovators as a government research institute. But what does it mean to be an innovator and what does it take to innovate? 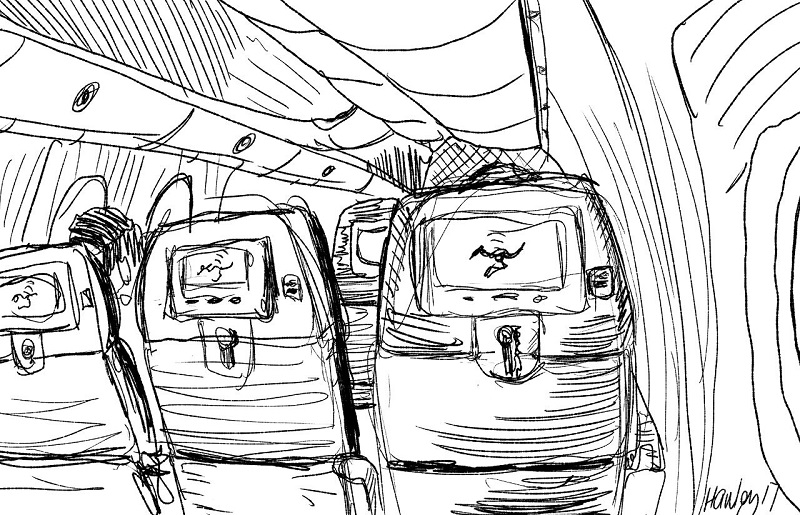 No ordinary sketch: this image was tweeted live via Qantas’ first-ever WiFi-enabled flight.

We were recently lucky enough to be invited on Qantas’ first ever WiFi-enabled flight. The flight was hosted by Qantas CEO Alan Joyce and our very own Dr Terry Percival, who led our team responsible for the invention of fast WiFi technology in 1991.

When we talk about science that has an impact, WiFi is surely one of the jewels in our crown. It has become ubiquitous in our society. It keeps us connected to the people we love, the world outside our communities, and the big ideas that inspire us. And it does this all while we’re on the go and getting on with our busy lives.

But it’s only one invention in a track record of innovation stretching back over the last century. 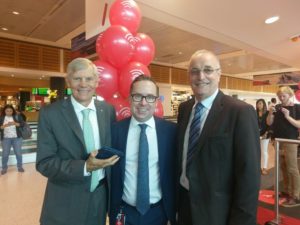 In fact, we’re so good at what we do we were recently landed in 18th place in Reuters’ Top 25 Global Innovators. We’re excited to tell you how we earned it, but first —

How do you measure it?

To rank the world’s most innovative research organisations, Reuters

– Compiled the 600 research organisations around the world that published the most research in the last eight years.

– Counted up the number of patents filed in those eight years, and their success rate,

– Counted up research publications, how many times they were cited by other researchers, and how often they were collaborations with industry partners.

– Chopped everyone who wasn’t a government institute, and…

We came out at number 18! And here’s how we got there. 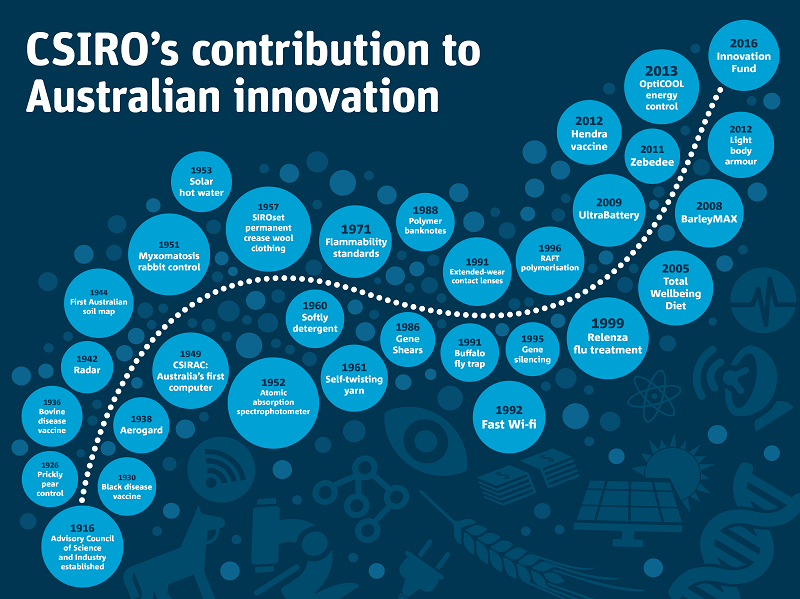 Ever tried to make it rain with paper money? It’s tough. Too much friction. Thankfully, back in the 80s we worked with the Reserve Bank of Australia to develop our polymer banknote, and the most secure form of currency in the world. The push to develop the notes came after a series of successful forgeries, and what’s quite the tale, which you can read about here. Polymer banknotes are, of course, more hygienic, cheaper, and functional than paper ones and are slowly being adopted around the world. The proof of their usefulness is in the pudding…pudding them through the washing machine and having them come out crisp and ready to go! Make it raiin, ft, ft, ft, ft!!

Hendra virus, have you heard of it? Well, if not, that’s probably a good thing. Hendra virus is a virus made of RNA (as opposed to DNA) that is harboured by fruit bats. Hendra was found to spread to other species, including horses and secondarily, humans. The virus was discovered in 1994 after an outbreak in Brisbane that results in the deaths of 13 horses and their trainer. Nineteen years later, our researchers developed Equivac® HeV, a vaccination for horses against the deadly Hendra. And now we’re now working on a similar vaccination for the people who work most closely with them.

Fly strike. Apart from being your knee-jerk reflex to a fly whizzing around your head, fly strike is a condition commonly suffered by livestock. With sheep’s inability to wipe their bums or swat flies, they’re left vulnerable to the larvae of flies. We’ll stop the story there. Needless to say, it was in everyone’s best interest to find a solution to fly strike. And that’s why our researcher Doug Waterhouse developed a spray to keep away nasty flying insects from livestock, and, it turns out it’s great for ewe and me. The repellent was applied during World War II to great reception. But, it was when Doug’s special formula came to the rescue of the visiting Queen Elizabeth II in 1963 when it garnered the attention it deserved. Doug was contacted by Mortein, and now we have the venerable Aerogard.

WiFi, WIFI, Wifi, Wi-Fi, however you’d like to format it, WiFi is fantastic (we’re going to stick with ‘WiFi’, if that’s okay). Without WiFi, our local area networks have to be hooked up with cables if they’re to communicate with one another. Trying to send wireless signals between machines indoors, results in those signals becoming garbled, lost in translation between Point A and Point B. So, during the 90s, it was a team of our researchers that worked on developing equations to resolve these garbled signals, which resulted in the wireless local area networks that would become fast WiFi. That same WiFi has just been rolled out in a country-first, flying high with Qantas and freely available for inflight use. For more information about our work with WiFi, visit this page.

Previous post:
The Atlas of Living Australia: Collect it, log it, use it
Coming up next:
Beefing up our prawns