Proceeds of crime: how polymer banknotes were invented

Proceeds of crime: how polymer banknotes were invented

They’re waterproof and tough – not to mention colourful – but plastic notes were developed for their unforgeability.

They’re waterproof and tough – not to mention colourful – but plastic notes were developed for their unforgeability. Lis Ferla/Flickr, CC BY-NC

Welcome to CSIRO Inventions, a series looking at the discoveries and innovations borne from Australia’s national science agency. In this first instalment, we outline the story behind the plastic money we use today – and the criminal world that drove its development.

The Reserve Bank of Australia (RBA) and CSIRO’s 20-year “bank project” resulted in the introduction of the polymer banknote – the first ever of its kind, and the most secure form of currency in the world.

The project commenced in 1968 and continued until 1988 with the release of the A$10 bicentennial commemorative banknote. But it’s the story behind this story – a personal note of forgeries, underworld figures and CSIRO – that is just as impressive.

Australia’s transition from the pound to the dollar – on Decimal Day, February 14 1966 – was a momentous occasion. The new currency was seen as being a marker of our independence from the mother country, and the changeover from pound to dollar was well-planned and executed. 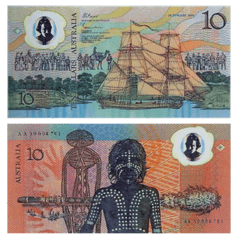 The first polymer banknotes. One side symbolised European settlement and the other, the original discovery and settlement of Australia 40–60,000 years earlier.
RBA/Wikimedia Commons

(A little-known fact: a nationwide competition was held to find a name for our new currency with an “Australian flavour”. Among the more than 1,000 submissions were the “austral”, “boomer”, “kwid” and “ming”, but “dollar” was chosen.)

By April 1966 most of the old imperial banknotes had been removed from circulation, and a new range of state-of-the-art dollars and coins were doing the rounds of the nation’s tills, wallets and pockets. With designs by leading Australian artists and cutting edge security features such as watermarks and metal thread, things couldn’t have been better for the note-issuer, the RBA.

But the new notes were not infallible, and it didn’t take long for counterfeiters to strike.

By the end of the year, a team of amateurs from suburban Melbourne, armed with simple office equipment and a desire to make some money, were able to produce a batch of fake notes with no intaglio printing, no watermark and no metal thread that would net them almost A$800,000 worth of forgeries. (That figure’s not to be sneezed at – it would be worth A$9.6 million in 2013.)

The nucleus of this team were two “regular joes” with no real criminal history: Francis Papworth, an artist from Bentleigh, and Jeffrey Mutton, who owned a failing milk bar in Moorabbin near a printing plant where Papworth worked.

As with many great schemes, this one was hatched over a beer – Papworth and Mutton often met at the Boundary Hotel in East Bentleigh. It was January 1966, only a few weeks before the introduction of the dollar, and the two mates were looking for an easy way to reverse their fortunes. Papworth worked at a printing plant … so why not print some money?

The first A$10 notes, featuring architect Francis Greenway on the front and poet Henry Lawson on the back. RBA/Wikimedia Commons

Deciding it was a “goer”, they enlisted a third contemporary, Dale Code, along with Ron Adam (a professional photographer) and Bert Kidd, a notorious career criminal who was to provide the funding for the scheme. Their original target was the ten shilling note, but on the release of the A$10 note on Decimal Day they decided that the new version was going to be even easier.

What followed was a tale of ingenuity, intrigue and deceit. Using only their basic printing equipment, the forgers were able to produce three batches of fake notes – each more sophisticated than the next – that would stay in circulation for many years. But despite their initial success, the authorities soon picked up on their activities.

Adam, Code and Mutton were tried and found guilty of forgery in 1967 but Papworth, who had been a police informant, was found not guilty. Kidd was arrested in 1969 after Mutton, who was already serving time, gave evidence against him.

Paper dollars looked nice, but thanks to Mutton and his forging mates, were replaced by polymer.

News of the forgery soon became public, and a period of unrest followed. Instructions were issued by the Reserve Bank on how to spot the forgeries, which were then to be handed to authorities. But anybody turning a note in would not receive a genuine note in return, so many continued to be circulated.

A general distrust of A$10 notes permeated Australian society – at one stage, members of the Amalgamated Engineering Union refused to accept them as part of their pay packet.

Call in the scientists 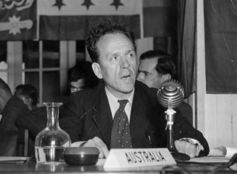 The challenge was set: could we create the world’s most secure banknote? After some preliminary planning, the “bank project” began. Coombs originally enlisted seven top Australian scientists – five physicists and two chemists – to help the RBA develop a more secure banknote. They met on April 1, 1968, and despite the date, these were no April fools – the two chemists were Jerry Price, who went on to become chairman of CSIRO, and Sefton Hamann, chief of the CSIRO Division of Applied Chemistry.

The group was introduced to the general principles of banknote design and production, and sent off to think about it before reconvening for a second meeting at Thredbo in June 1968.

Two more scientists were invited to Thredbo: Neil Lewis, recently retired from Kodak, and David Solomon, a young, award-winning polymer scientist from CSIRO. It was during these first few years that Dr Solomon first hit on the idea of a plastic banknote after being given a business card printed on plastic by a visitor from Japan.

By February 1972, CSIRO and the RBA had agreed to commence a project to develop polymer banknotes with a range of optically variable security devices. The CSIRO team soon developed a “proof of concept” and presented it to the RBA.

As well as being difficult to forge, these new notes were also more durable than the traditional “rag notes”, more environmentally friendly and less likely to carry dirt and disease. 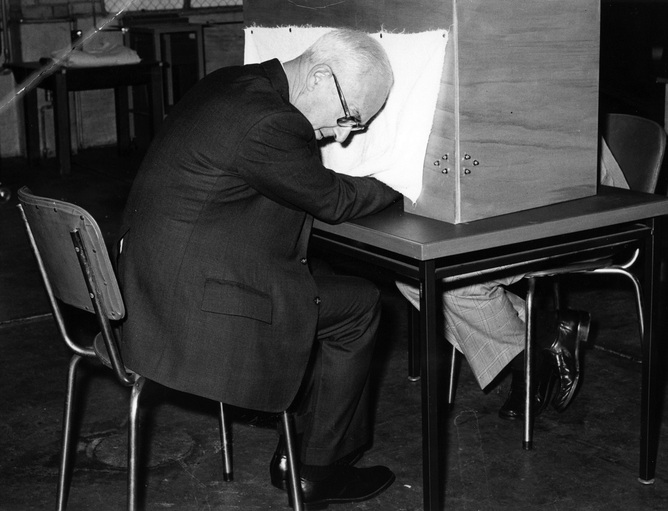 These technical improvements were made within the first ten years of the bank project, but behind-the-scenes delays prevented the issue of these revolutionary notes until the bicentennial year 1988. In a defiant gesture to Papworth, Mutton and co, the first note issued was – you guessed it – A$10.

Today, there are more than 30 different denominations totalling some three billion polymer notes in service in 22 countries worldwide.

For more information, The Plastic Banknote: from concept to reality is available to buy from CSIRO Publishing.

Tom Spurling was employed by CSIRO during the development of the polymer banknote.

David Solomon was employed by CSIRO during the development of the polymer banknote.

Previous post:
The thorny issue threatening the coral reefs of Pilbara
Coming up next:
Investigator makes light of heavy weather!