This plastic problem is getting personal

This plastic problem is getting personal

Over the past few weeks we've followed the journey of Polly the plastic bon bon toy to find out who she is and what she's made of all to demonstrate how plastics are made and where they end up. 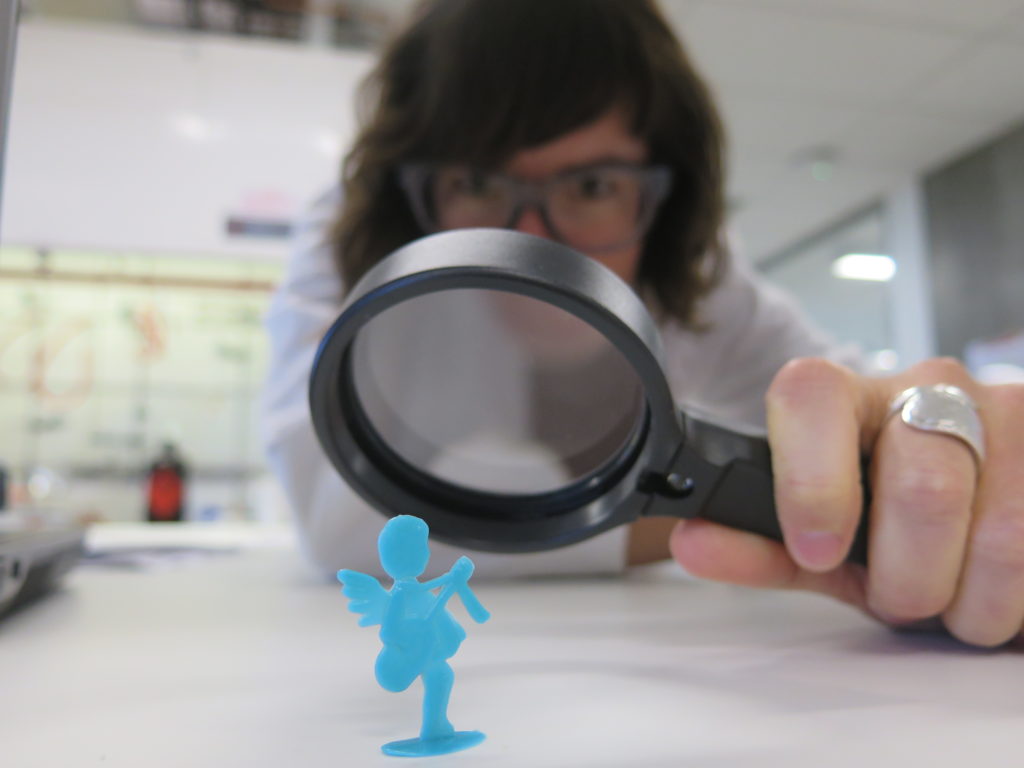 Life in plastic is fantastic now that Polly knows where she came from.

Over the past week you may have followed our story investigating #WhoisPolly on Instagram. The story began with a bang.

Polly arrived in a Christmas bon bon, suffering a serious identity crisis. She had no idea where she’d come from.

Enter Dr Lucy. She has been helping Polly figure out her heritage. By conducting a few tests, Dr Lucy slowly found out more and more about Polly.

Spoiler alert! Polly is actually short for polyethylene, which is a type of plastic. Not really sure what that means? Read on.

‘Plastics’ is a generic term used to describe ‘polymers’. The word polymer actually means ‘many units’ in Latin (poly = many; mer = unit) and these units are called ‘monomers’.  So a polymer consists of a lot of monomer units chemically attached to one another in a chain.

This means that Polly’s made up of lots of units of ethylene joined together, which gives her the name ‘polyethylene’. Now that we know this, how was Polly actually made?

How to make plastic: A radical experiment

Making polymers from monomers is a relatively simple process, but a radical one. Literally.

Once the polyethylene raw material is made, it can be melted and shaped into different products. Polly was made in a factory by a similar process.

Like humans, Polly is made up of unique molecules that relate to her heritage. Dr Lucy found from her experiments that Polly is quite flexible. Other plastics made up of different monomers have different properties. Take polypropylene for example, these plastics might be used for hard tubes and containers that hardly flex at all! 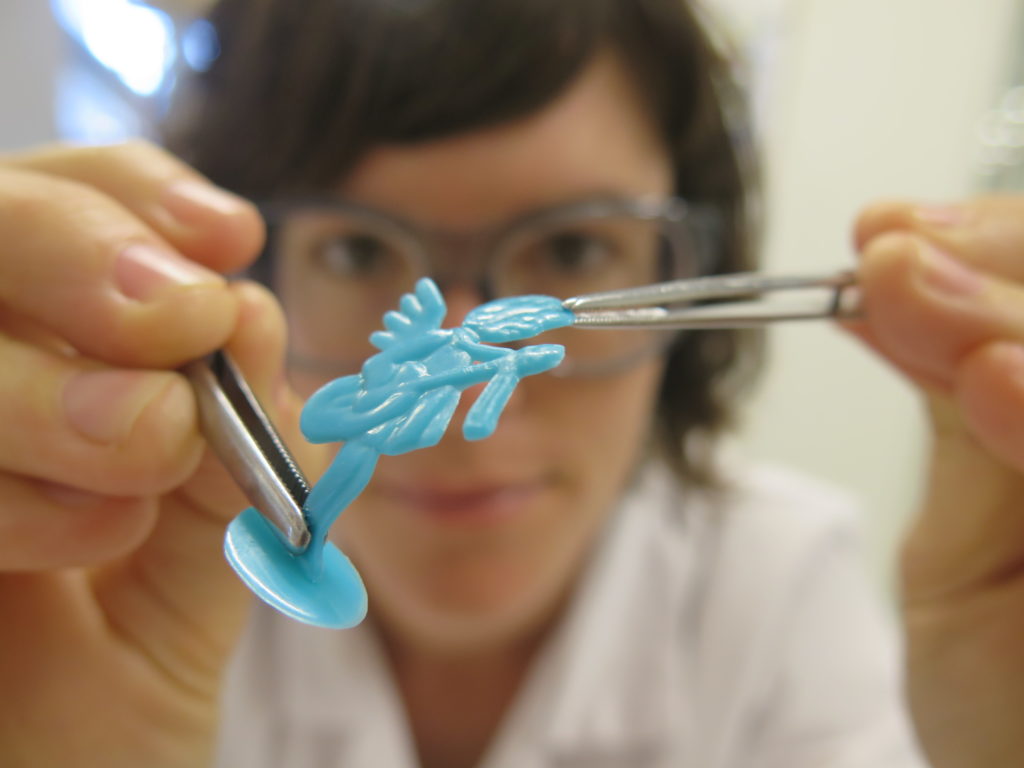 In her spare time, Polly enjoys practising yoga to keep herself limber.

In her spare time, Polly enjoys practising yoga to keep herself limber.

In addition to the type of monomer/s used to make polymers, other things like how long the polymer chains are, how they interact with each other and what order the monomer units are in can all affect a plastic’s properties. You can read here about the work that CSIRO scientists have done to control some of these parameters.

Scientists have also developed a range of different tools that can be used to figure out the structure of a particular plastic’s molecules. If Polly were human, we’d simply take a DNA sample. She’s a plastic though, so we need to do a different test to look at her chemistry. Dr Lucy used ‘infrared spectroscopy’ to find out a bit more about Polly’s structure.

Some other tools that scientists use include Gel Permeation Chromatography (GPC) that measures the size of a polymer against a set of known plastic standards, and Nuclear Magnetic Resonance (NMR), which is a giant magnet (similar to a MRI machine) that can be used to figure out the structure of polymers.

Polly’s part of a bigger problem

Polly Ethylene was so excited to find her identity, she asked us to introduce her to her rellies. And we did just that, by popping Polly into the nearest recycling bin. 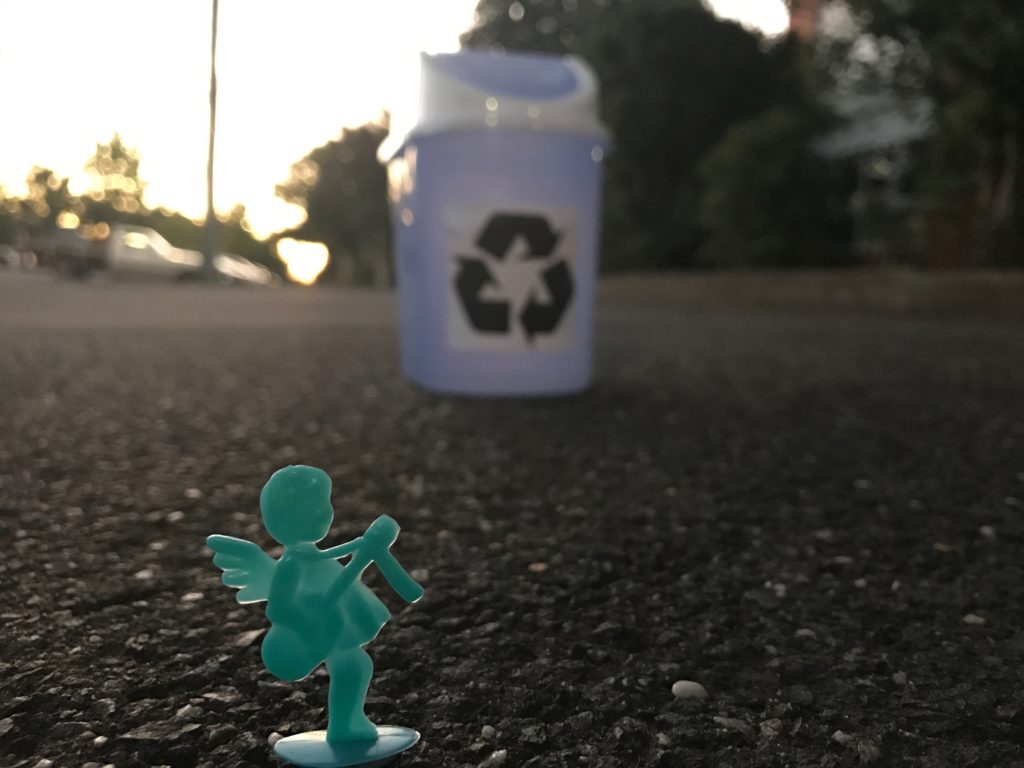 Polly heading off to be with her big plastic family.

Polly heading off to be with her big plastic family.

Now that she’s out of earshot, we can safely tell you that Polly’s plastic family is a bit of problem. Unfortunately, they are harmful to our aquatic life. It’s projected by 2050 95% of our seabirds will have ingested some plastic.

This is mainly caused by incorrect disposal of our plastics which can get into our waterways and landfill, rather than being recycled into new products.

So the next time you come across one of Polly’s relatives – what will you do? Will you throw her into the bin along with the roast chicken carcasses, or will you choose the bin that takes your milk bottles? To find out what you should do, this link has all the information you need!

We may know #WhoisPolly now, but the story doesn’t end there. We can all help our planet by recycling Polly and all her plastic relatives correctly, to create a better planet for everyone.

P.S. We know Christmas has come and gone… but that’s no reason to stop talking’ trash!