Ozone hole closing for the year, but full recovery is decades away

Ozone hole closing for the year, but full recovery is decades away

These clouds – formed high in the Antarctic atmosphere during spring – provide a place where ozone-destroying chemicals can form. Image: sandwich/Flickr, CC BY-NC-ND

Imagine an environmental crisis caused by a colourless, odourless gas, in minute concentrations, building up in the atmosphere. There is no expert consensus, but in the face of considerable uncertainty and strong resistance to the science, global regulation of these emissions succeeds.

Subsequently, the science is established and the damage, though already apparent, begins to be mitigated.

No, this is not fantasy. It’s history. We’re talking about the ozone hole.

In two or three weeks the Antarctic’s seasonal ozone hole will close for the year. The ozone hole has formed every spring since the 1970s. This year’s is among the smaller ones over the past 20 years — since ozone-depleting substances began declining.

However, it may take another few years before we can definitively say the Antarctic ozone hole has recovered, and several decades until full recovery to pre-1980 conditions.

Even the stratospheric ozone known as “the ozone layer” is not a single layer of pure ozone, but a region where ozone is more abundant than it is at other altitudes. Satellite sensors and other ozone-measuring devices monitor the total ozone concentration for an entire column of the atmosphere, and whether there is more or less than normal.

Throughout the 1970s, scientists began to observe two separate but related phenomena: the total amount of ozone in the stratosphere — the region 10 to 50 kilometres above the earth’s surface — was declining steadily at about 4% every ten years. And in spring there was a much larger decrease in stratospheric ozone over the polar regions.

By the mid-1980s, they reached the conclusion that the cause was a chemical reaction between ozone and halogen (chlorine and bromine). This halogen came from man-made substances: chlorine/bromine-containing refrigerants, solvents, propellants and foam-blowing agents (chlorofluorocarbons or CFCs, halons and hydrochlorofluorocarbons or HCFCs).

When exposed to UV light and in the presence of polar stratospheric clouds, these molecules break down, releasing radical chemicals that destroy ozone atoms at an alarming rate.

CFCs, one of the most prominent culprits, were first synthesised in the 1890s, but it wasn’t until the 1950s that they began to be widely used as refrigerants.

The most unfortunate scientist

Thomas Midgely, the chemical engineer who improved their synthesis and demonstrated their potential uses, was probably the most unfortunate scientist ever to rise to an influential position.

In 1921, he discovered that adding tetra-ethyl lead to fuel improved the efficiency of internal combustion engines. Unfortunately, this discovery was commercialised. Lead persists in the atmosphere today. It also accumulates in animals, sometimes to toxic levels, particularly those at the top of food chains.

Subsequently, Midgely set himself to solving the problem of the refrigerants in use in the earlier part of the 20th century. These were uniformly dangerous — either flammable, explosive or toxic. CFCs weren’t and were soon widely adopted, not only as refrigerants but also later as propellants and blowing agents.

The best thing about CFCs – their low reactivity – is also the worst. Because they’re so unreactive, they’re very long-lived (often in excess of 100 years). This gives them time to get into the stratosphere. One of the components of CFCs is chlorine. Very little chlorine exists naturally in the stratosphere, but CFCs are a very effective way of introducing significant amounts of chlorine into the ozone layer.

Midgely’s efforts to do good had dire unintended consequences: he’s been described as having had more impact on the atmosphere than any other single organism in Earth’s history.

By the late 1960s, scientists had detected growth in the level of CFCs in the atmosphere. By 1974 researchers published the first paper predicting that the increase in CFCs would cause significant ozone loss.

The ozone hole hypothesis was strongly disputed by some industry representatives.

Nonetheless, the reality of a possible depleted ozone layer and the threat to human health it implied so alarmed the international community that by 1985 the Vienna Convention for the Protection of the Ozone Layer was agreed on, even before the significant ozone depletion was detected. The convention came into force in 1988 and was ratified over subsequent decades by 197 nations, making it one of the most successful treaties of all time.

The following year (1989), the Montreal Protocol on Substances that Deplete the Ozone Layer (which falls under the Vienna Convention) also came into force. This treaty was designed to enact the spirit of the Vienna Convention – i.e. to protect the ozone layer – and achieved it by phasing out the production and consumption of numerous substances that are responsible for ozone depletion.

Repairing the ozone hole is a long-term process. CSIRO has been monitoring the hole over Antarctica since the late 1970s. The ozone hole first appeared in spring over Antarctica and subsequently over the Arctic, as the ozone-destroying chemical processes require very cold conditions and the onset of sunlight (following the polar winter).

In Antarctica, the hole lasts for two to three months before breaking up and mixing with ozone–richer air from mid-latitudes. It’s not constant in size — except in the sense that it’s consistently very large — although it waxes and wanes. The record so far is 29.5 million square kilometres, set in 2006.

For comparison, the land mass of Australia (including Tasmania) is 7.7 million square kilometres.

Although some reports claim that the ozone layer over Antarctica is recovering, it’s too early to make a definitive call. Measurements at surface monitoring stations show that the amount of ozone-destroying chemicals at the surface has been dropping since about 1994-1995. The amount is now about 10-15% down on that peak.

The stratosphere lags behind the surface, and the effects of this will take some time to play out. However, satellite measurements show that the decline in ozone amount in the stratosphere has stopped, and perhaps begun recovery.

The size and depth of the ozone hole each year shows quite large variability due to different meteorological conditions, in particular stratospheric temperatures.

Overall, out of the 35 years of satellite data analysed, the 2014 ozone hole is one of the smaller ones since the late 1980s. It ranks as the 18th largest in daily area; 16th largest for daily ozone deficit; and 21st lowest for minimum ozone.

The 2014 ozone hole appeared in the first week of August and grew rapidly in size from mid-August through to the second week of September, reaching 23.5 million square kilometres on September 15. 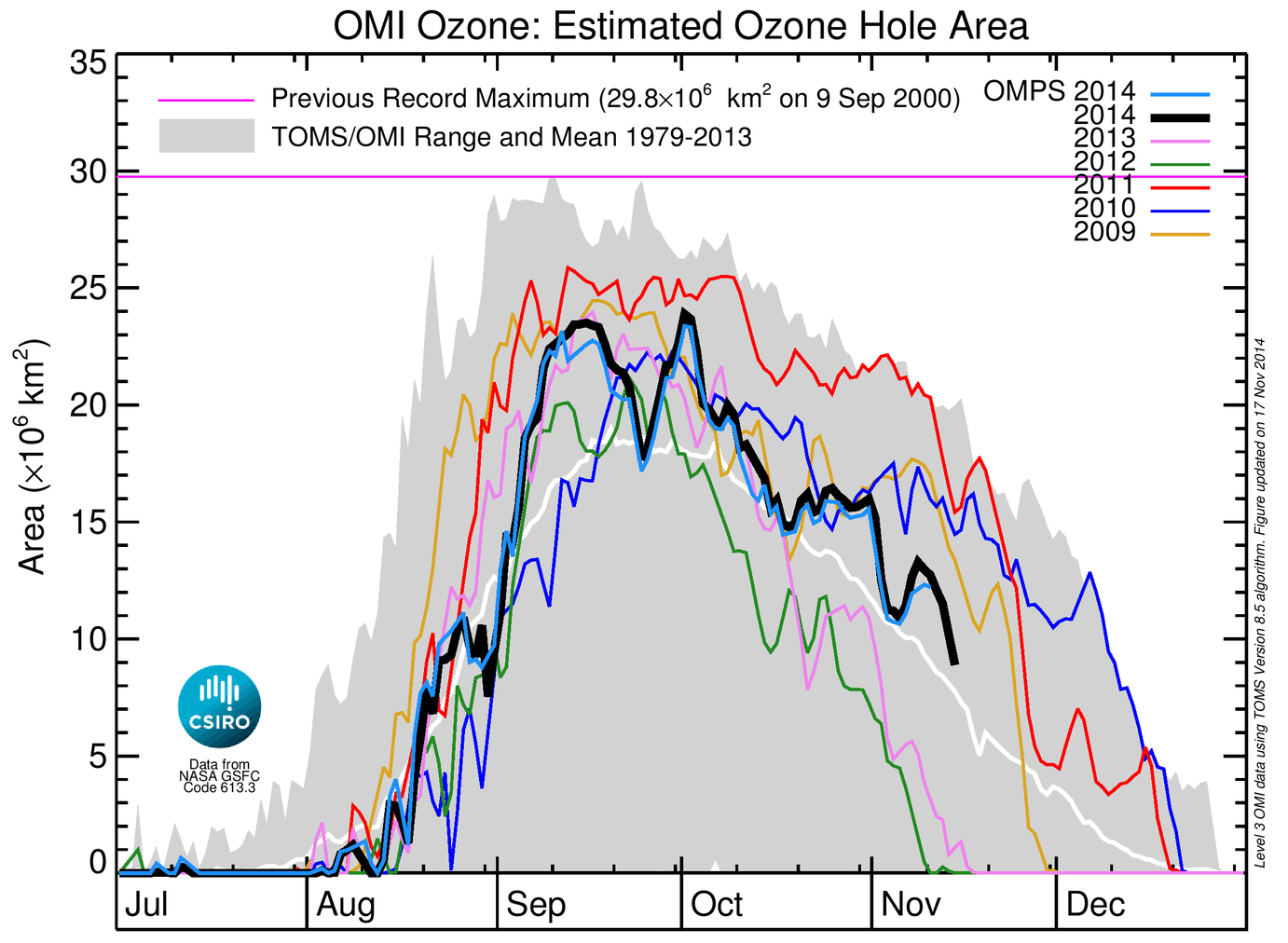 The ozone hole is now in the recovery phase, and had shrunk to about 9 million square kilometres by November 14. It is expected to recover this year in two to three weeks.

You can find the full details on the 2014 ozone hole here.