The current population explosion and mass migration of moths and butterflies in Queensland is due to recent rain. 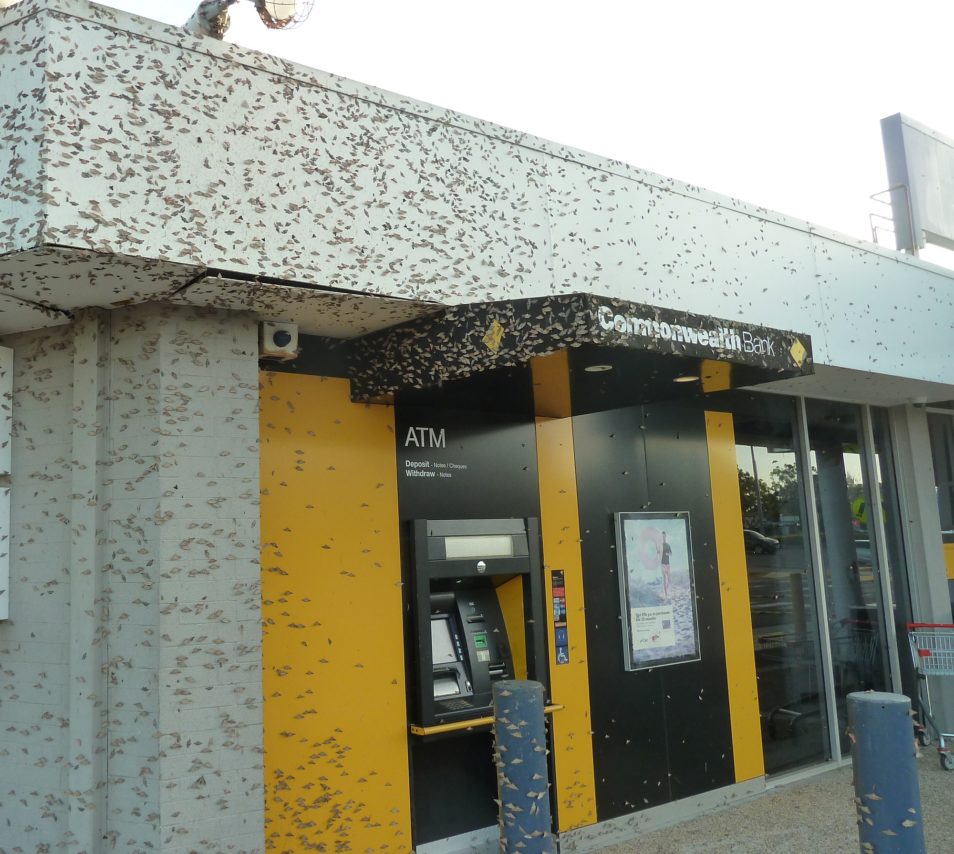 Huge numbers of moths are milling around, and settling on, the Commonwealth Bank branch at Kenmore in Queensland. The moth swarm phenomenon has attracted the interest of local resident Don Sands, an honorary fellow of our Australian National Insect Collection. Let’s just say they aren’t there to cash in a cheque.

“The moths are attracted by the lights on the building in combination with the yellow wall at the bank, especially at night,” Don said. “They also settle on nearby objects and walls of various colours and have done so for more than a week.”

The yellow paint colour of the bank happens to be a very attractive shade to insects. It’s similar to the yellow sticky traps Don has used many times to catch moths and other insects for research. Some insects may be attracted to yellow for different reasons, including if it matches their food source, such as flowers. 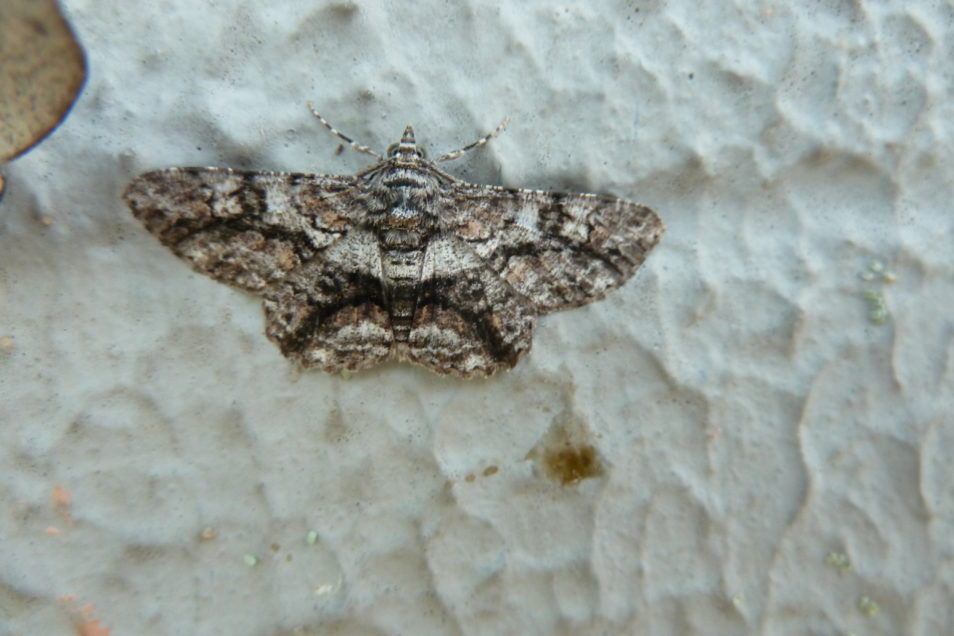 Moths typically rest with the upper side of their wings visible, while butterflies hold them closed above their body, hiding the often colourful upper side of the wings. This moth belongs to the species Cleora displicata. Photo credit: Don Sands

Queensland’s huge number of moths reveal the diversity of moth species in Australia. The current population explosion and mass migration of both moths and butterflies is due to recent rainfall.

In times of drought, moths and butterflies press pause on their life cycle by entering a state known as diapause. This usually occurs at the pupal stage. Not all moth caterpillars spin a cocoon, many pupate between leaves tied together or in the soil. Moth pupae can stay frozen in time for up to five years, depending on the species, before emerging as adults.

“The moth abundance and their emergence has been triggered by prolonged drought followed by rain,” Don said. “Numbers are abnormally high due to suppression of parasitoids last spring and by rain breaking diapause of inactive stages,” he said.

Parasitoids are insects, mostly wasps but also tachinid flies, that parasitise moths and butterflies. Their tale is similar to the very hungry spider wasp, a wasp that parasitises spiders.

“In my opinion small parasitic wasps have suffered more from the drought than moths, meaning their normal ecological role of keeping moth numbers under control has been thrown into imbalance,” Don said. 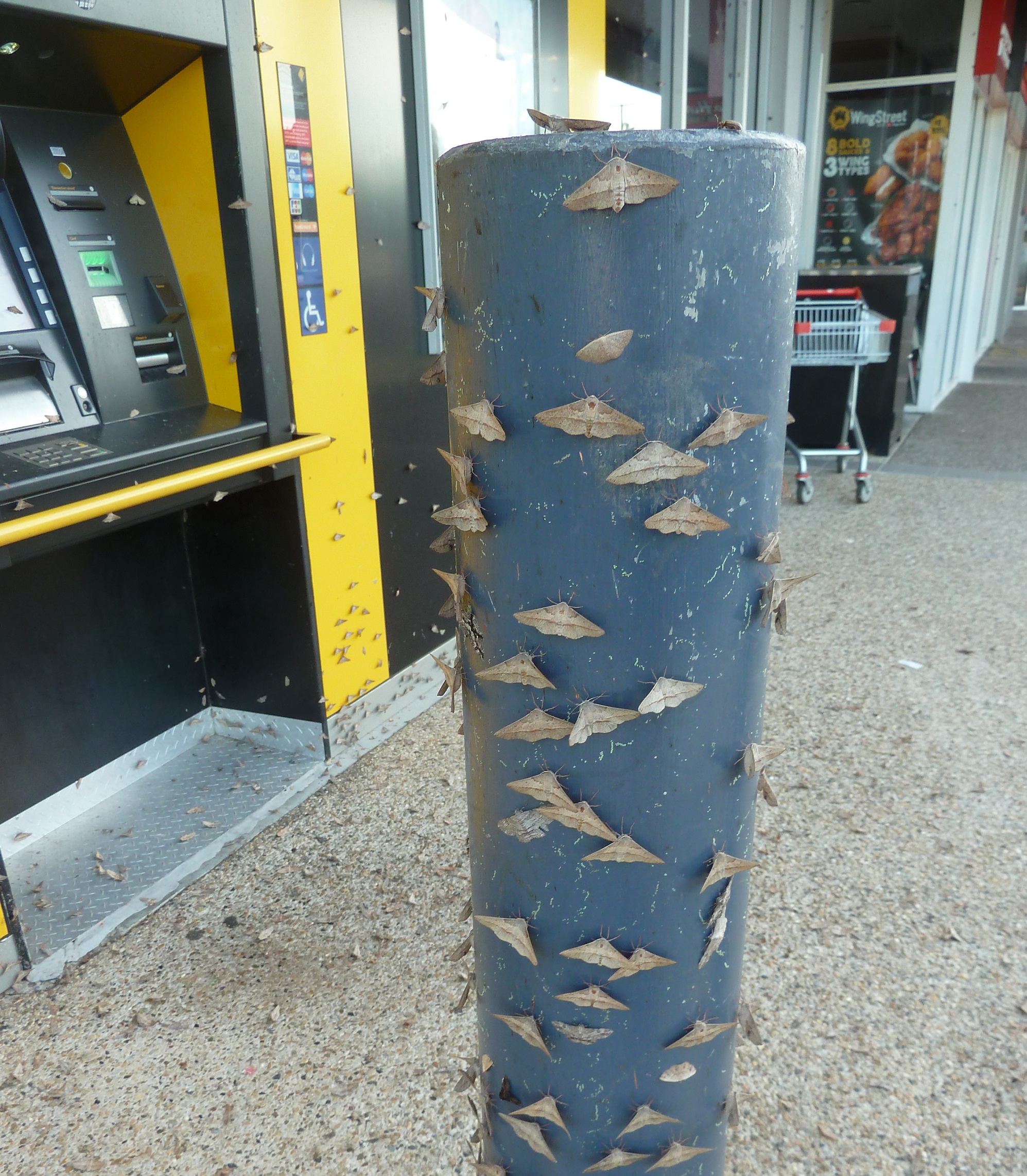 Most of the moths on this bollard are the species Antictenia punctunculus. The larvae of this species, which feed on eucalypts. Photo credit: Don Sands

In the counting house

We’ve counted at least 15 different species of moths on the bank. They include agricultural pests such as Helicoverpa armigera and some species that are new to science.

This is not surprising. Only around half of Australia’s moths and butterflies have been described and named. It highlights the ongoing need for taxonomists and ecologists who can describe and protect biodiversity and tell pest moths apart from native species.

“Most of the moths on the bollard beside the ATM are Antictenia punctunculus in the family Geometridae,” Ted Edwards of our Australian National Insect Collection said. “There is also an outbreak of the larvae of this species. The larvae feed on Eucalyptus and I have not heard of an outbreak of such numbers of this species before.”

Other species Ted spotted on this bollard are Cleora displicata, which is also in the Geometridae family, and a moth from the family Eutelliidae.

Read more about moths in our post about the rediscovery of Queensland’s Kauri Moth.

Previous post:
Students beaver away on solutions during Bebras Challenge
Coming up next:
How floating ice walls are protecting the Antarctic ice sheet