Moonwalk your way to The Dish

Moonwalk your way to The Dish

Do you swoon over the Moon? What if we told you that you can get up close and personal with space right here in Australia, in the middle of a ‘sheep paddock' in country NSW? 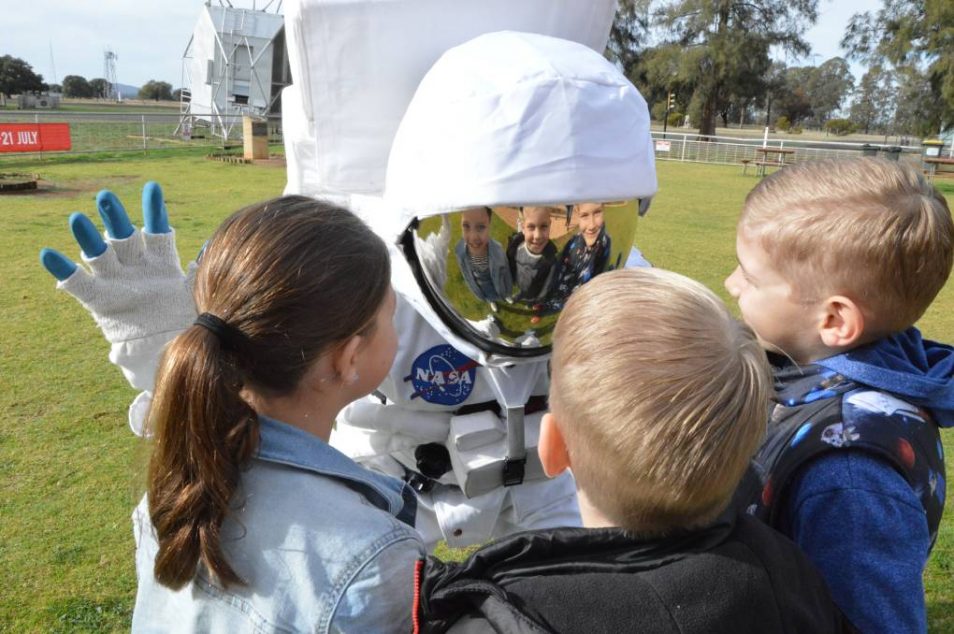 STAR STRUCK: Ashlee Trim, and George and Oscar Hendry could see themselves in astronaut Patrick Helean’s helmet at The Dish last week as preperations for the 50th anniversay of the moon landing were unveiled. Photo: Christine Little, via Parkes Champion Post.

Fifty years ago, 600 million people sat captivated in houses, shopping centres, schools, offices and public squares around the world. They were watching an event that created a powerful collective experience for the audience. Together, they stopped and stared as Neil Armstrong and Buzz Aldrin took the first steps on the Moon.

But it doesn’t matter if you weren’t there in 1969, with your nose pressed to a TV screen. Chances are that when you were a kid you announced you’d be an astronaut one day. And, if NASA’s images of galaxies and supernovas don’t leave you in awe, we reckon you’ve probably rocked out to astronaut Chris Hadfield’s rendition of Bowie’s Space Oddity. The Moon landing – and space in all its enormity – still inspires curious minds.

Well, what if we told you that you could get up close and personal with space right here in Australia? In the middle of a ‘sheep paddock’ in country New South Wales.

Leap over to Parkes

To celebrate, we’re giving you the rare opportunity to tour our iconic telescope at Parkes on Saturday 20 and Sunday 21 July.

But first, let us woo you with a little history of the telescope and our involvement in the Moon landing 50 years ago.

At 12.56 pm on 21 July 1969 (AEST), humans took that monumental ‘giant leap’. Those images flashed across our TV screens in living black and white. And while it was NASA’s moment, it was Australia’s too. Sending astronauts to the Moon and sharing the momentous occasion couldn’t have happened without the pivotal role Australia played.

Australian facilities received and relayed images to the world, tracked spacecraft and monitored the astronauts’ health. The initial TV pictures from the Moon and Neil Armstrong’s first steps on the lunar surface were shared via NASA’s Honeysuckle Creek tracking station near Canberra. After a few minutes, the higher quality television signal received by our own Parkes telescope was relayed around the world.

Are you Moon-curious? Get your space questions ready!

Imagine if you had to look off into space, as part of your job! Dr Jane Kaczmarek is a resident astronomer at our Parkes radio telescope. And the great news is, she’ll be at the Parkes open days to answer your questions and share her (astronomical!) knowledge and enthusiasm about all things space.

“If you want to know what an astrophysicist does, come talk to me! I’ll be here all weekend answering any space-related questions our visitors might have. I’ll also be giving free talks about the science that we do with the telescope,” says Jane. 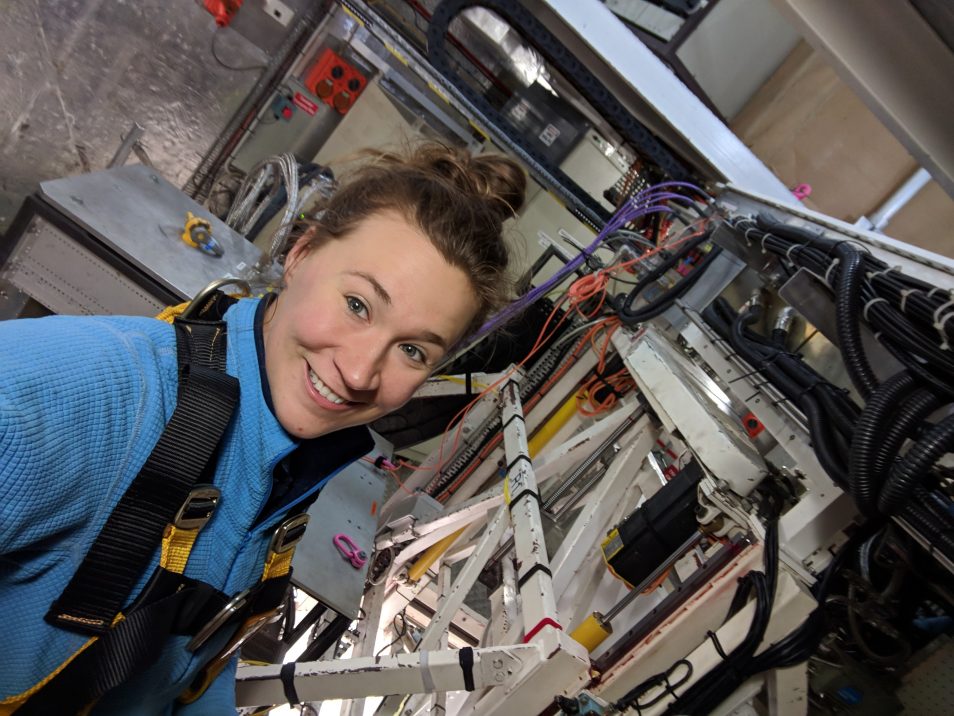 Dr Jane Kaczmarek, our resident astronomer, is excited to show you around the Parkes Radio Telescope! Photo: Dr Kaczmarek

So what can we look forward to at ‘The Dish’?

“You’ll get to grab a hardhat and take a tour through the telescope to see where the historic signals were received, or if you prefer to keep your feet on terra firma, we’ve got a team of experts giving regular guided ground-based tours as well.”

“Then you can pull up a seat on the lawn by the Dish and watch the night-time screening of the movie, ‘The Dish’, while the Milky Way arches overhead.” 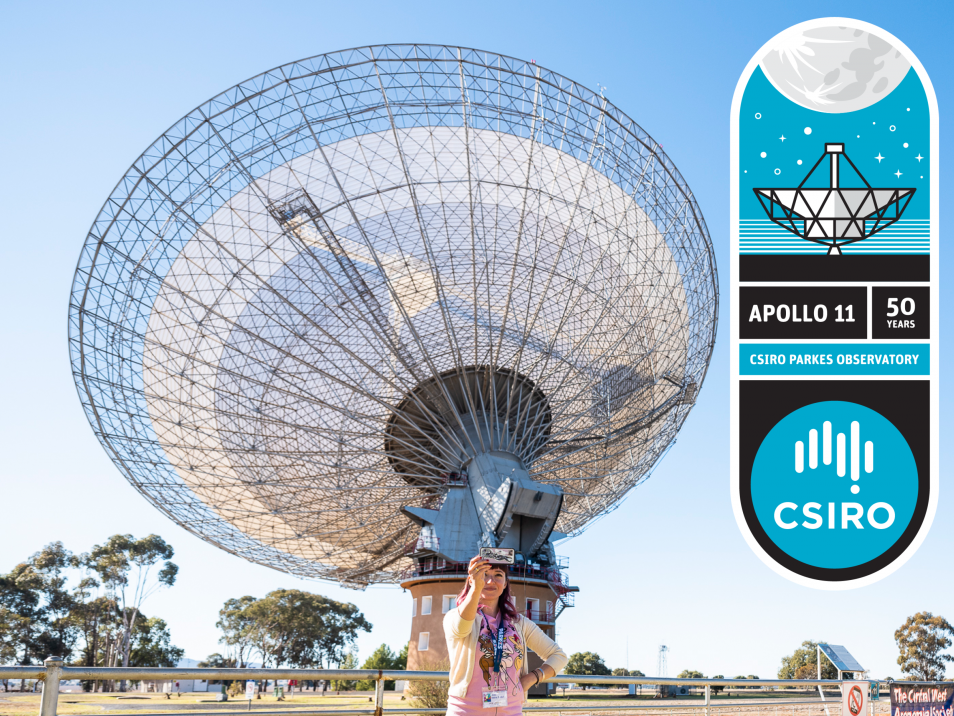 What’s a visit to the Dish without a dishy selfie? Photo: @VisitParkesRegion | Denise Yates

The event is free, and there’s no need to register. (Bless my stars!)

You can find more information on the Facebook invite, here.

And if you can’t make it out to Parkes, we’ve put together a handy list of Apollo 11 celebrations taking place around Australia.

We acknowledge the Wiradjuri people as the traditional owners of the CSIRO Parkes Observatory site.

Join us to celebrate the Apollo 11 Moon landing: a free and rare event on the weekend of 20-21 July.