Mega-pest worms its way into Brazil

Mega-pest worms its way into Brazil

We often speak of the risks of new invasions in our increasingly interconnected world, and stress the need for a strong and reliable biosecurity system to safeguard our borders.

As global trading and markets increase, it’s essential to develop our ability to detect incursions using new and innovative surveillance techniques combined with rapid identification capabilities.  This is important because Incursions by exotic pests and diseases have the potential to seriously impact Australia’s people, agricultural industries and unique environment.

And right now, a team of Australian and international scientists are working closely with colleagues in Brazil as one of the most destructive pests known to agriculture – the cotton bollworm (Helicoverpa armigera) – worms its way into Brazilian agricultural fields.

Helicoverpa armigera has long been recognised as a serious biosecurity threat to the Americas, where it has the potential to establish across the South and North American continent with far greater anticipated potential economic loss to corn and cotton than the closely related Helicoverpa zea which is endemic to the Americas.

Incredibly, despite being intercepted at US Ports of Entry a staggering 4431 times since 1985, this mega-pest had not been previously reported to take hold on the American continents.

In Australia, Asia, Africa and Europe, where cotton bollworm is considered native, the damage it causes is estimated to cost $US 2 billion each year. In the last two growing seasons, high infestations of Helicoverpa species larvae were found in different regions of Brazil, resulting in substantial economic losses of up to 10 billion Brazilian Reals ($US 4.4 billion). 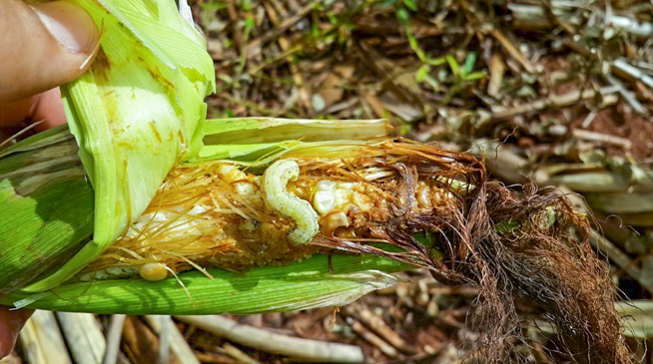 A cotton bollworm larvae decimating a cob of corn

At first it was assumed that the damage was being caused by Helicoverpa zea, because the cotton bollworm had never previously been detected within the country. However, as the scale of spread and destruction was monitored, the Brazilian scientists knew that something was different and suspected that maybe the dreaded incursion of Helicoverpa armigera had indeed begun. At this point, Brazilian scientists from the Mato Grosso Cotton Institute approached CSIRO researchers to assist in the careful identification of the species attacking their crops.

Our scientists, together with French and Indian colleagues from CIRAD and IRD in France and the Indian Council of Agricultural Research used evolutionary and population genetics to confirm that the cotton bollworm has now successfully invaded Brazil.

Along with the confirmation that the Brazilians are indeed dealing with a new incursion of a serious exotic pest, the international team led by scientists from the CSIRO Biosecurity Flagship and Matto Grosso Cotton Institute is providing further vital data that will assist Brazil to manage this new menace.

The next steps for the research team are to investigate where the moth originated, where they are currently distributed, its spread across the South American continent, and the incidence of resistance to key pesticides. This information, coupled with CSIRO’s extensive expertise in insecticide resistance management will assist Brazil to develop effective strategies to manage this mega-pest.

You can read the full research paper at PLOS ONE.

Previous post:
Dish Horticulture – plant it and they will grow
Coming up next:
Marine National Facility Steering Committee meeting in Hobart