Only a small part of the ocean depths has been mapped in detail. So we must ask: “what great discoveries are still down there waiting to be uncovered?!”

The ocean depths hold many secrets. They’re also one of the planet’s final frontiers for discovery. Great undersea mountain ranges and enormous canyons hide clues about our planet, its history and how it works. The deep sea even holds clues to our own past through the time capsules of ancient shipwrecks.

We use our research vessel RV Investigator, with its array of specialised and sophisticated scientific equipment, to peer into the ocean depths and uncover these well-hidden secrets.

Echoes from the ocean depths

Aboard RV Investigator, the Geophysical Survey and Mapping (GSM) team go about uncovering the seafloor’s mysteries. They utilise highly specialised sonar equipment. The sonar equipment ‘pings’ sound into the depths. It then waits for these sounds to echo back from the seabed. It’s like how a bat uses sound waves and echoes to navigate in the dark – a natural skill called echolocation.

The different instruments and the different frequency of sounds shed light on an otherwise dark and silent world. You might have already learned about our machines that go ping from our RV Investigator voyage down the East Australian Current. 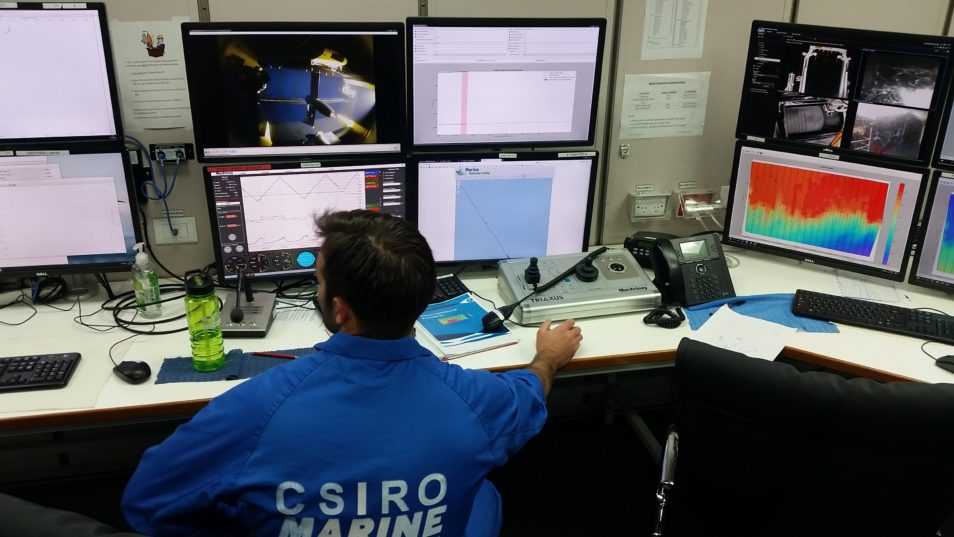 Inside the operations room onboard RV Investigator.

From ‘ping’ to product

The GSM team carefully monitor the ship’s sonar data throughout all its voyages. From the cold and windy Southern Ocean to the sweltering tropics and the Great Barrier Reef.

Our sonar gear is always on. So as RV Investigator covers vast tracts of ocean, huge amounts of data are gathered. This data needs to be stored and interpreted by the technical and research teams on the ship. But it is used in many ways. One of the most important is to create highly detailed 3D maps of the seabed.

Sea-mountaineering in the murky ocean depths

Ascending from 5000 metres below the ocean is the Zeehan Seamount. It was recently mapped by the RV Investigator and stands 2500 metres above the seabed. It’s also part of the Tasmantid Seamount chain in the northern part of the Tasman Sea.

There are more than 14,200 seamounts scattered across the world’s oceans. Seamounts are known to form over mantle plumes, or ‘hotspots’. They are extra hot parts of the Earth’s inner layers (mantle). As a result, these ‘hotspots’ are sometimes able to push through the outer surface (crust) of the Earth where the molten rock accumulates. And, in some cases, form seamounts.

Chains of seamounts form when the Earth’s outer surface, or tectonic plates, move over these ‘hotspots’. And they create not just one, but a series of undersea mountains. To piece together the story of these seamounts and understand more about their formation, the GSM team use 3D maps. The team combines its maps with a host of other datasets. This includes what the seabed is made of and what lies beneath it.

This is a 3D view of Zeehan (left) and Heemskirk (right) Seamounts. Scientists on board RV Investigator in 2018 mapped them.

These datasets are like parts of a jigsaw, which help scientists piece together the mysteries of our planet and all its land and sea formations. By understanding these formations and the processes that formed them, we can better predict the future of our planet.

We’ve pulled together some of the recent geophysical survey data collected from voyages around Australia to show you how we map the ocean floor. This web page highlights some fundamentals of seamounts, submarine canyons, ridges, seabed iceberg scouring and even shipwrecks. Here are a few of the great underwater visualisations that you can learn more about.

About three million shipwrecks litter the oceans across the globe. About 8000 of these are believed to lie around the shores of Australia. The SS Lake Illawarra (pictured) wreck is located in the Derwent River in Hobart and surveyed in detail. 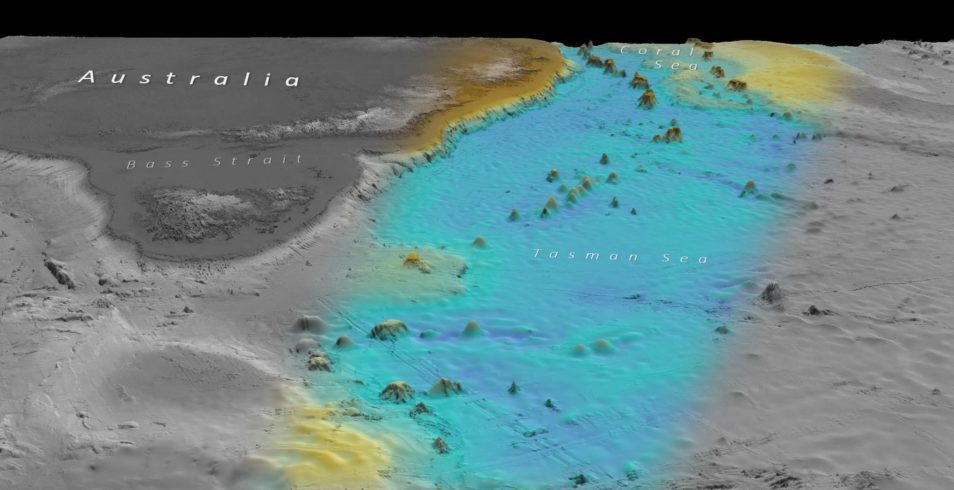 You may have heard of the Hawaiian volcano chain. But what about our own Australian chain? The Tasmantid seamount chain consists of 16 extinct volcanoes, some with elevations of more than 4000 metres. The volcanoes are aged from six to 40 million years old.  The seamount chain spans 2000 km across the Coral and Tasman Seas. Data sourced from GEBCO.

When an iceberg drifts into shallow waters, its base or keel can come into contact with the seabed. And this causes scours. We’ve mapped scours carved into the seabed by icebergs adrift in the Southern Ocean.

Bremer Canyon, off the coast of Bremer Bay in Western Australia, is one of Australia’s marine biodiversity hotspots. It starts atop the continental shelf in 100–200 metres of water before plunging to abyssal depths of more than 4000 metres. Background data sourced from GEBCO.

Previous post:
How drought-breaking rains transformed these critically endangered woodlands into a flower-filled vista
Coming up next:
CSIRO twist in the history of Twisties