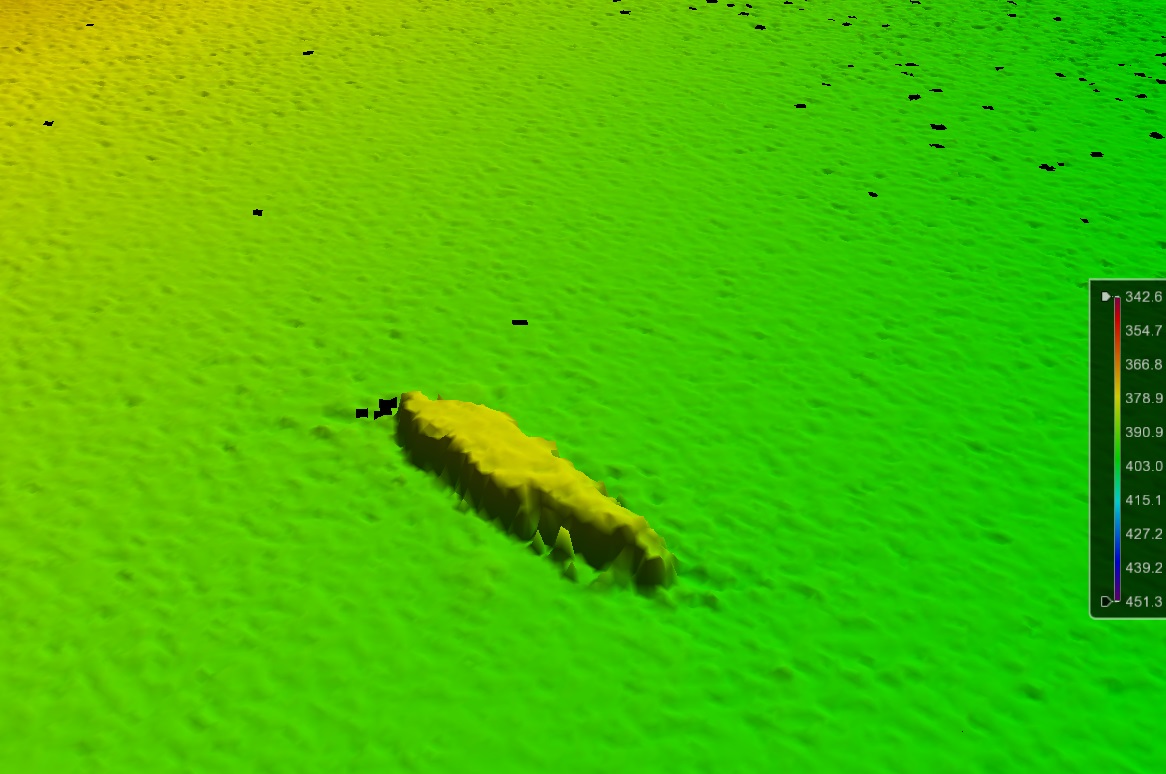 THIS MEDIA RELEASE WAS DISTRIBUTED BY THE NSW OFFICE OF ENVIRONMENT AND HERITAGE ON 10 OCTOBER 2013.

Sophisticated multi-beam sonar technology has been used to create up-to-date images of the shipwreck of HMAS Australia, once the flagship of the Royal Australian Naval Fleet, Director of Heritage Division at NSW Office of Environment and Heritage (OEH) Tracey Avery announced today.

Ms Avery said the images were captured on board Australia’s Marine National Facility research vessel, Southern Surveyor off Sydney Heads, close to the location where the ship was scuttled in 1924.

“HMAS Australia was launched in 1911 and commissioned as the flagship of the Royal Australian Navy (RAN) in 1913,” Ms Avery said.

“The ship led the fledgling fleet into Sydney Harbour on 4 October 1913, at the end of its delivery voyage from England, along with six other vessels and it is this event the International Fleet Review has been commemorating (3-11 October 2013).

“This highly significant vessel was Australia’s only battlecruiser, and it is considered the ‘grandmother’ of the RAN and was instrumental in preventing German aggression in the South Pacific during World War I.

“The arrival of the flagship HMAS Australia and the newly formed Royal Australian Navy in 1913 was highly significant, as it symbolised Australia’s coming of age as a nation that could protect itself with its own Navy, and the end of the reliance on British protection.

“Amid great controversy, the British agreed to decommission the vessel under the terms of the Washington Treaty (1922), and HMAS Australia was scuttled with full military honours, a move that was designed to limit the spread of a naval arms race in the Pacific region.”

Although a previous video inspection of sections of the site was undertaken in 2007 by the RAN, a complete and detailed survey of the extent of the wreck site has never before been undertaken.

OEH was provided with research time on board Southern Surveyor, to locate and capture the first 3-D images of the shipwreck, which sits in 390 metres of water, and was discovered in 1990 during a commercial survey.

The Australian Marine National Facility is funded by the Commonwealth and operated by CSIRO. The survey vessel is available to all Australian scientists and their international collaborators.

OEH Maritime Archaeologist Brad Duncan said research time was obtained aboard the Southern Surveyor during a September transit voyage from Brisbane to Hobart.

“The multi-beam imaging carried out on-board, provides more comprehensive images of the wreck than were previously available and they build on previous research in 2007, when a video inspection of the site was carried out,” Mr Duncan said.

“As HMAS Australia sank, loose items fell off (including gun turrets); and the wreck caused an underwater landslide when it collided with the seabed, which spread wreckage over a vast area.

“The images confirm the shipwreck came to rest upside down on a gentle slope, it is laying North-west–South-east and it has a slight list, with the bow to the surface. There is also evidence of a debris field around the hull.

“This survey, which shows the vessel has not degraded significantly since it was first located, will add significantly to our understanding of how the wreck site was formed.”

The HMAS Australia is listed as a protected historic shipwreck on the Australian National Shipwreck Database, and is managed by the Office of Environment and Heritage under delegation from the Commonwealth government.

Further details of previous inspections can be found at:

Previous post:
Livelihood futures – adaptation options for Indonesian communities
Coming up next:
Parkes, the gift that keeps on giving