Diversified cropping, village food processing and flexible seaweed culture are some of the new approaches being trialed by small farmers and fishermen on the Indonesian islands of Lombok and Sumbawa to improve their livelihoods and prepare for the combined effects of climate change and population pressure. 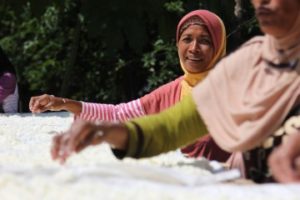 Diversified cropping, village food processing and flexible seaweed culture are some of the new approaches being trialed by small farmers and fishermen on the Indonesian islands of Lombok and Sumbawa to improve their livelihoods and prepare for the combined effects of climate change and population pressure.

The DFAT-CSIRO Research for Development Alliance is a strategic partnership that aims to tackle important development challenges in the Asia-Pacific region through improved knowledge of climate, water and energy systems. The Alliance builds partner capacity to inform development decisions that will improve people’s resilience to the impacts of climate and other change, and provide options to adapt and manage their natural environment.

In partnership with the Government of Indonesia, the University of Mataram and local stakeholders, the Alliance is implementing a project that uses a participatory method of combining downscaled climate projections, livelihood assessments and policy evaluation to identify vulnerable communities and appropriate adaptation strategies.

“We conducted an overlay analysis between our food security and vulnerability atlas, which represents a snapshot of people’s food security and CSIRO’s analysis of impacts of climate change and population growth on livelihood condition,” says Mr Panjiwibowo.

“This showed a strong consistency in the results for existing vulnerable areas and identified some sub-districts that need more urgent focus,” he says.

In dry North Lombok, where annual rainfall is projected to decline by 9% by 2030, the project is trialing cassava, which grows very well in dry conditions, as an alternative to rice. Cassava yields about 20-25 tonnes per ha compared to rice which has a yield of about 3.5 tonnes per ha.

In 2012-13, researchers from CSIRO have been working with farmers and womens’ groups in two villages to pilot cassava processing. The groups are producing shredded cassava (sawut), as a rice replacement, and cassava flour.

Dr Baiq Rien of the University of Mataram, who has been running the trial believes that families will benefit by having an alternative source of income and food. Dr Rien says sawut could potentially replace up to 60-70% of rice in the local diet.

“The new skills and knowledge about cassava processing will help farmers and poor villagers survive because each household has a reserve of sawut as a food bank, which can last for more than a year,” explains Dr Rien.

As well as identifying alternative livelihood strategies to substitute for rice, the project is also looking at alternatives for tobacco farming and ways to improve existing enterprises such as seaweed aquaculture in East Lombok.

The project has involved 18 scientists at the University of Mataram, and helped to build their research skills to become a ‘Centre of Excellence’ for integrated sustainability science in eastern Indonesia. These researchers have learned how to integrate downscaled climate projections, population growth estimates, policy evaluation, ecosystem services and livelihoods assessments to analyse communities’ future development pathways.

To keep up with climate risk reports and the author’s publications, click here.