Orange Roughy: Can’t believe it has taken FFT over a year to come to this important fish of the sea. Mind you, I still use a typewriter and a Teledex.

Anyway, they are also know as the slimehead or deep sea perch and, as the last name suggests, are found in deep waters between 180m and about 1800m. They are found around Australia and New Zealand, in the Western Pacific Ocean, Atlantic Ocean, and in the Eastern Pacific off Chile. 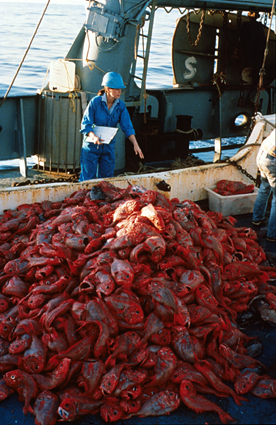 Inspecting a trawl of orange roughy. Orange roughy is a popular foodfish with a good export market, particularly to the United States. Orange roughy stocks on the southern boundary of the Australian Fishing Zone (South Tasman Rise) are considered vulnerable to exploitation as the species is long-living and easily caught when aggregating to spawn or feed. Sustainable catch rates elsewhere in the Australian Fishing Zone are a matter of continuing scientific assessment. CSIRO Marine Research contributes to this through the interpretation of acoustic survey data and biological information collected using the fisheries research vessel Southern Surveyor.

The orange roughy is slow growing and long lived – usually about 145 year but apparently there is one in the Australian National Fish Collection in Hobart that is about 160 years old.

The orange roughy grows to about 75cm and a maximum weight of 7kg.

Because it is so slow growing and late to mature, the species is extremely susceptible to overfishing and stocks especially those off New Zealand and Australia collapsed in the 1980s and there is debate if they have recovered.

The information below is from Wikipedia and I think is another reason (to go along with the fact the fish have had a bloody hard time over the years) to exclude them from your diet.

Due to its longevity, the Orange Roughy accumulates large amounts of mercury in its tissues, having a range of 0.30 – 0.86 ppm compared with an average mercury level of 0.086 ppm for other edible fish. Based on average consumption and the recommendations of a National Marine Fisheries Service study, in 1976, the FDA set the maximum safe mercury level for fish at 1 ppm. Regular consumption of Orange Roughy can have adverse effects on health.

Previous post:
Scribbly gum ‘scribbles’: an ancient dialect written in the trees
Coming up next:
Jumping into The Helix!