Scribbly gum ‘scribbles’: an ancient dialect written in the trees

Scribbly gum ‘scribbles’: an ancient dialect written in the trees

The secret life of the scribbly gum moth has been revealed, including how and where these moths develop and how they make their scribbles.

The iconic ‘scribbles’ on the smooth white trunks of Australian gum trees have intrigued many and, in particular, they caught the attention of writers and poets. 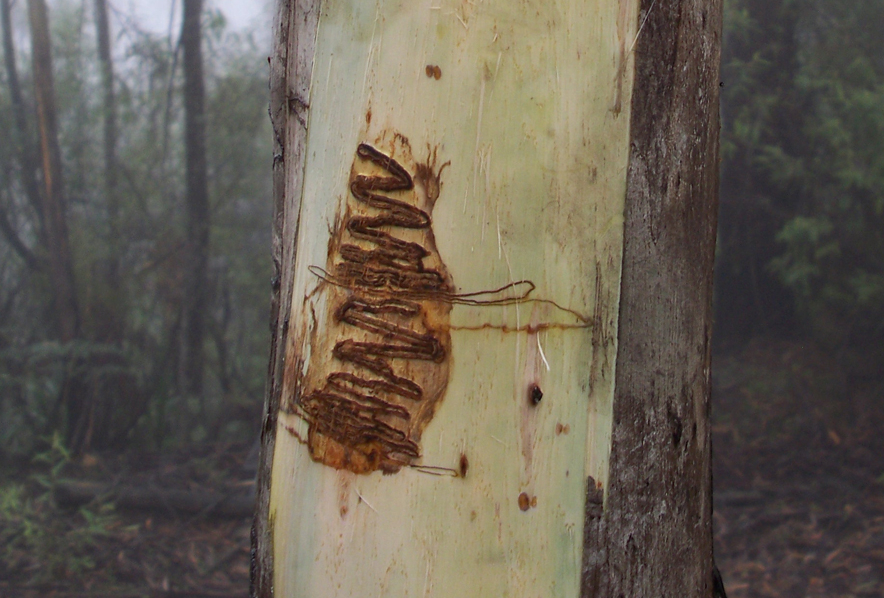 The ‘scribbles’ on scribbly gum trees are an Australian icon. Image: Marianne Horak

In 1918, May Gibbs used the scribbles as inspiration in her much-loved books, Snugglepot and Cuddlepie. 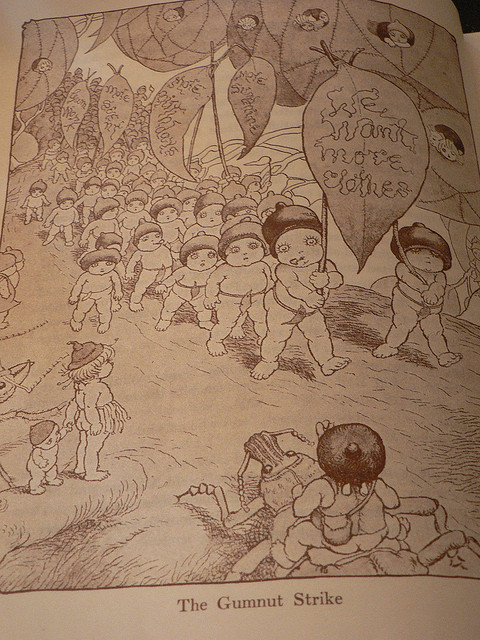 The scribbles inspired the font on the banners seen here at ‘The Gumnut Strike’ in May Gibbs’ Snugglepot and Cuddlepie. Image: Flickr / brilliam

In 1955, Judith Wright wrote her poem ‘Scribbly Gum’: The gum-tree stands by the spring/ I peeled its splitting bark/ And found the written track/ Of a life I could not read.

(From A Human Pattern: Selected Poems by Judith Wright. Used with permission.)

The scribbly dialect, which zigzags around in a seemingly random and indecipherable pattern, found its place in Australian literature and culture. Yet the cause of the scribbles has always been somewhat of a mystery. They are old and dry with no sign of their creator, no ‘graffiti tag’ to identify the artist. How and why are they on the trees? What creature is responsible?

Scientists knew it had to be an insect. In the early 1930s, entomologists working with the CSIR—CSIRO’s precursor—had only been on the job a few short years in Canberra when their curiosity was aroused on observing the strange script on trees at their back door—the slopes of Black Mountain. André Tonnoir, Frederick Holdaway and Tom Greaves finally reared specimens of a tiny moth, and sent them to an expert, Edward Meyrick, in England; it was a new species, and he named it Ogmograptis scribula—the scribbly gum moth. But that’s as far as they got and for many years our knowledge about scribbly gum moths languished.

That all changed this week. 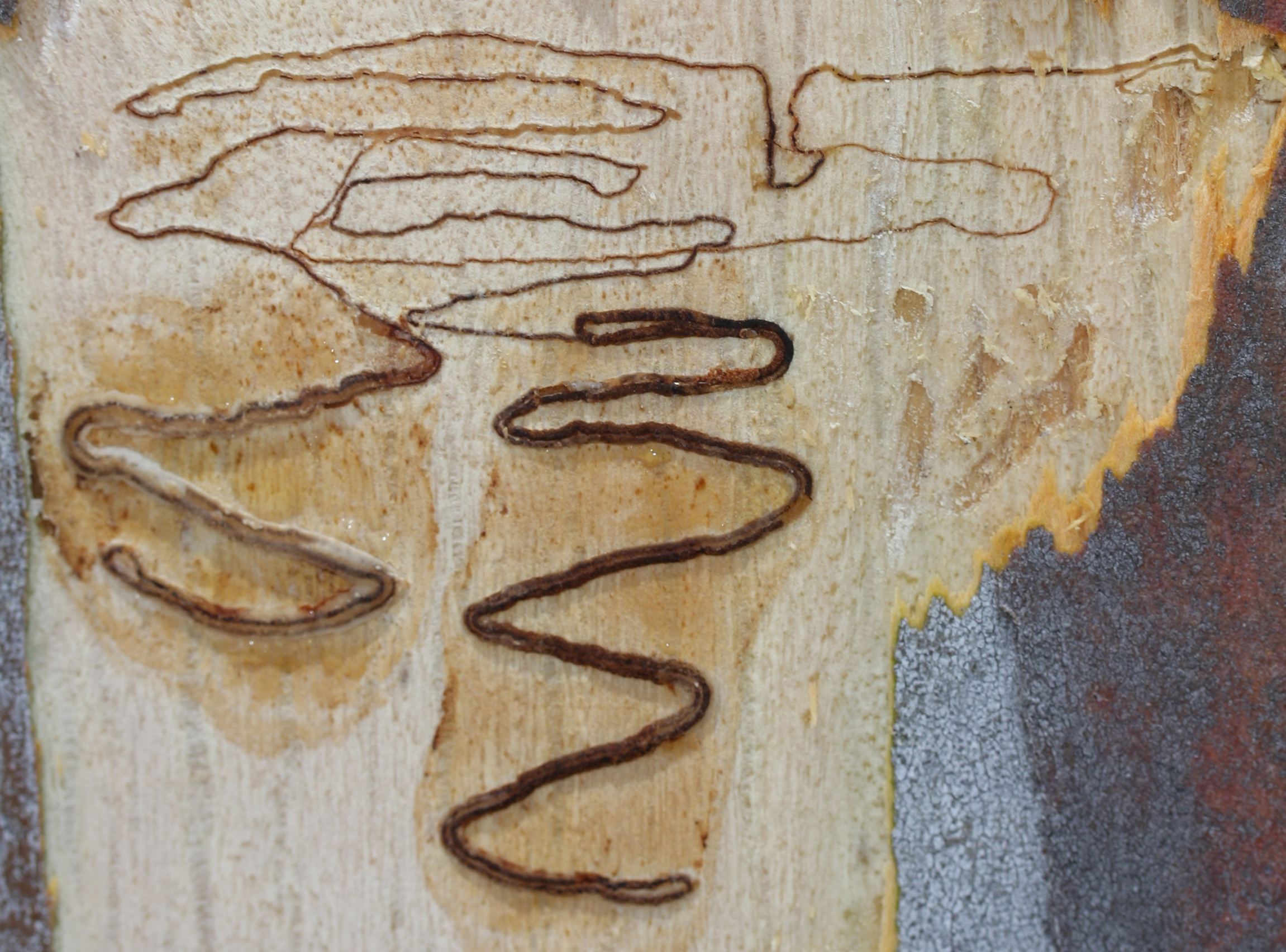 The life cycle of the scribbly gum moths is written in their scribbles. Image: You Ning Su.

A painstaking study by a team of entomologists, botanists, molecular technicians and imaging experts—several of them retired but still active in the science that they love—has revealed how and where these moths develop and how they make their scribbles. They have also expanded the list of known scribbly gum moth species from one to 14 and revealed that the moths had an ancestor that inhabited the ancient supercontinent Gondwana. Marianne Horak, the lead author, has written about their amazing discovery.

The life of a typical scribbly gum moth starts in autumn as an egg laid on the bark surface. The hatching caterpillar burrows vertically down into the trunk then makes a 90 degree turn as it reaches the depth where next year’s cork cambium layer will form. It then starts on a zigzag culinary journey, always taking care to stay beneath bark that will be shed in the following year. As it grows, it sheds its skin several times – an insect skin is a hard shell and can only stretch so much before its owner needs a new, bigger one.

After moulting for the last time the scribbly gum caterpillar, now grown to a grand length of 10 millimetres, does a strange thing. It turns around and retraces the tunnel it had bored, eating the nutrient-rich callus tissue that the tree laid down in response to the initial damage by the mini-borer. This final stage lasts only a few weeks, but the caterpillar grows rapidly. Then it bore its way out of the trunk, drops to the ground and spins a flat, ribbed silken cocoon in a hidden spot, attached to a stone or a piece of bark. Inside the cocoon, the caterpillar transforms into a pupa, with the moth emerging in late summer or autumn to complete the cycle. See how this life cycle is represented in the scribbles here.

The scribbly gum moths have been writing the story of their lives on our gum trees for millennia. Now, at last, we know what they are saying.

Previous post:
The latest photos from the wharf: Investigator is looking fantastic!
Coming up next:
Friday Fish Time