Flinders Ranges Purple-spotted Gudgeon: A special fish for news@CSIRO and true Outback Battler. When working as a journalist in the 1990s I wrote a series of stories about a plan by a mining company to build an access road along a gorge in the Gammon Ranges (northern Flinders Ranges) which was a know habitat for the Flinders Ranges Purple-spotted Gudgeon. Of course my reports were fair and balanced….. To give full credit to the then SA State Government,  the miners were told to pack their swags.

So last week when news@CSIRO passed through the Gammon Ranges we had to stop of the Weetootla Gorge where the fish are found and pay our respects. 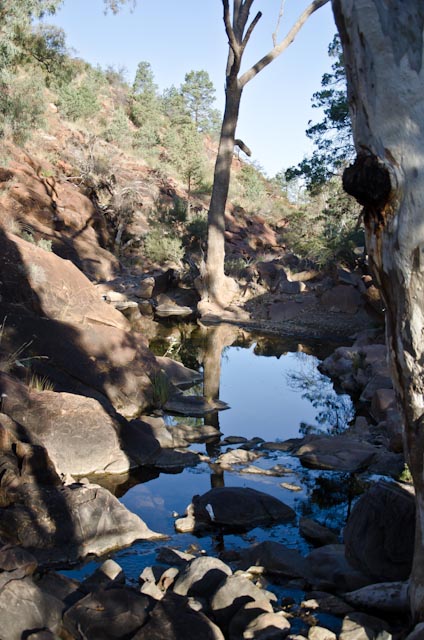 A gorge in the Gammon Ranges where the Flinders Ranges Purple-spotted Gudgeon is found.

Not a lot is known about these fish but the Department of Sustainability, Environment, Water, Population and Communities web site has a pretty good page on them HERE.

In part it says:

The Flinders Ranges Gudgeon is a robust freshwater fish growing to a max. length of about 13 cm, with a rounded tail fin, two separate back fins, a brown to dark blue back surface, and blue and rust spotting on the sides.

Known populations of this species appear to be confined to a small stretch (a few km) of Balcanoona Ck in the Gammon Ranges NP located in the NE Flinders Ranges of SA and a recently discovered population in the upper Barcoo River in Qld. Another specimen, collected at the Bulloo River at Tobermory Station in SW Qld is provisionally identified as this species.

Some of the fish were released in to the Thorndon Park Reserve in Adelaide about 10 years ago but I am not sure how they went.

Previous post:
Get your cranium around titanium
Coming up next:
Fast Fact!