Off southern Tasmania, at depths between 700 and 1,500 metres, more than 100 undersea mountains provide rocky pedestals for deep-sea coral reefs.

Unlike shallow tropical corals, deep-sea corals live in a cold environment without sunlight or symbiotic algae. They feed on tiny organisms filtered from passing currents, and protect an assortment of other animals in their intricate structures.

Deep-sea corals are fragile and slow-growing, and vulnerable to human activities such as fishing, mining and climate-related changes in ocean temperatures and acidity.

This week we returned from a month-long research voyage on CSIRO vessel Investigator, part of Australia’s Marine National Facility. We criss-crossed many seamounts in and near the Huon and Tasman Fracture marine parks, which are home to both pristine and previously fished coral reefs. These two parks are part of a larger network of Australian Marine Parks that surround Australia’s coastline and protect our offshore marine environment.

The data we collected will answer our two key research questions: what grows where in these environments, and are corals regrowing after more than 20 years of protection? 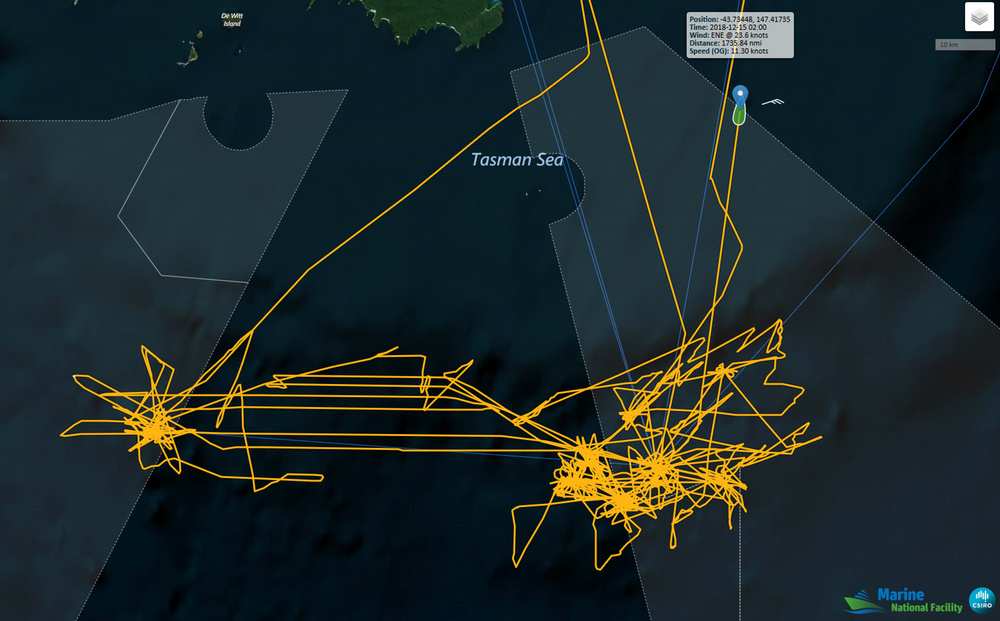 Our eyes on the seafloor

Conducting research in rugged, remote deep-sea environments is expensive and technically challenging. It’s been a test of patience and ingenuity for the 40 ecologists, technicians and marine park managers on board, and the crew who provide electronics, computing and mechanical support.

But now, after four weeks of working around-the-clock shifts, we’re back in the port of Hobart. We have completed 147 transects covering more 200 kilometres in length and amassed more than 60,000 stereo images and some 300 hours of video for analysis. 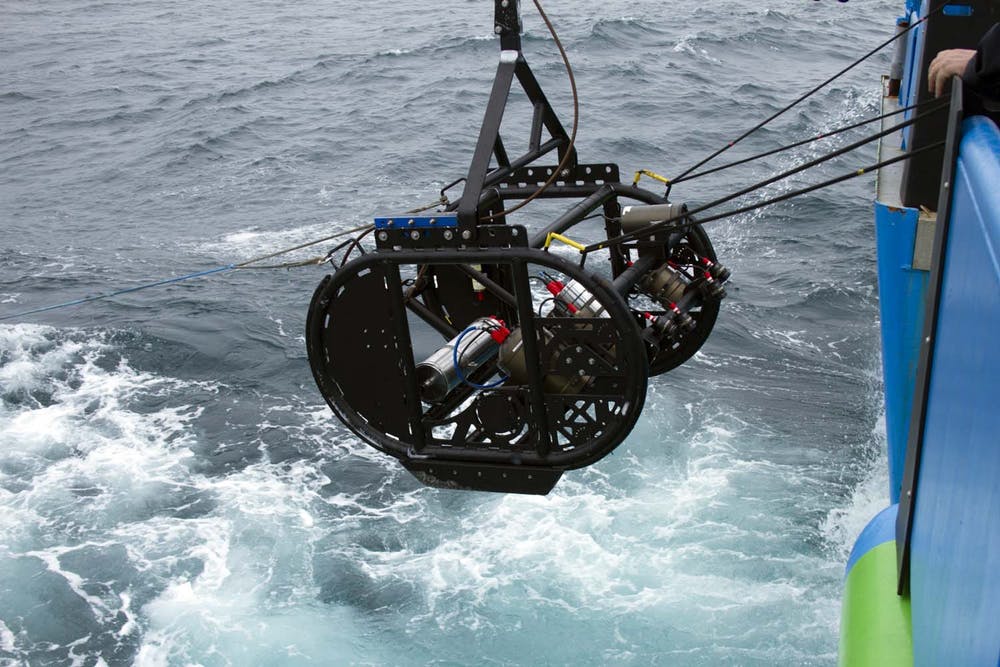 A deep-tow camera system designed and built by CSIRO was our eye on the seafloor. This 350 kilogram system has four cameras, four lights and a control unit encased in high-strength aluminium housings.

An operations planner plots “flight-paths” down the seamounts, adding a one-kilometre run up for the vessel skipper to land the camera on each peak. The skipper navigates swell, wind and current to ensure a steady course for each one-hour transect.

An armoured fibre optic tow cable relays high-quality, real-time video back to the ship. This enables the camera “pilot” in the operations room to manoeuvre the camera system using a small joystick, and keep the view in focus, a mere two metres off the seafloor.

This is an often challenging job, as obstacles like large boulders or sheer rock walls loom out of the darkness with little warning. The greatest rapid ascent, a near-vertical cliff 45m in height, resulted in highly elevated blood pressure and one broken camera light!

Reaching into their world

Live imagery from the camera system was compelling. As well as the main reef-building stony coral Solenosmilia variabilis, we saw hundreds of other animals including feathery solitary soft corals, tulip-shaped glass sponges and crinoids. Their colours ranged from delicate creams and pinks to striking purples, bright yellows and golds.

To understand the make-up of coral communities glimpsed by our cameras, we also used a small net to sample the seafloor animals for identification. For several of the museum taxonomists onboard, this was their first contact with coral and mollusc species they had known, and even named, only from preserved specimens. 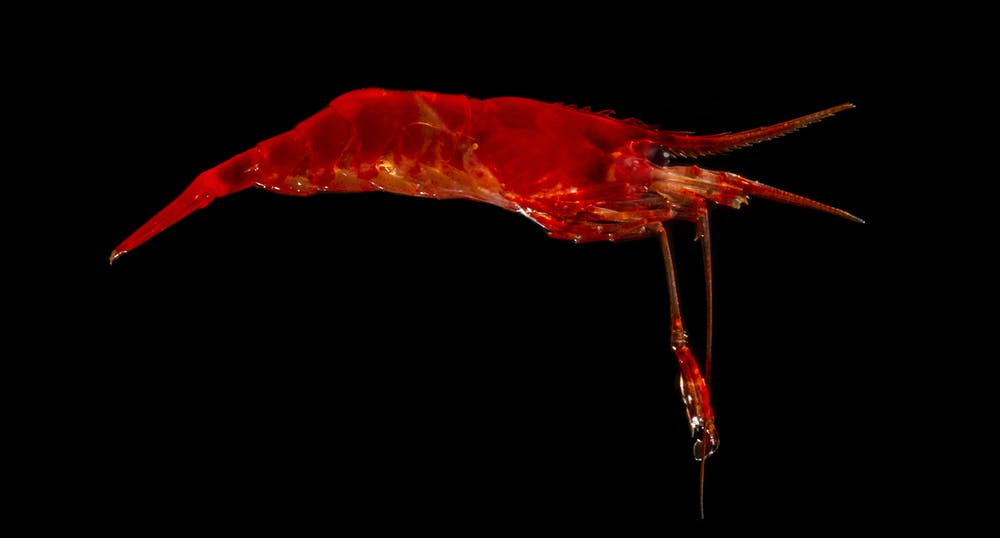 A deepwater hippolytid shrimp with large hooked claw, which it uses to clean coral and get food.

We found a raft of undescribed species, as expected in such remote environments. In many cases this is likely to be the only time these species are ever collected. We also found animals living among the corals, hinting at their complex interdependencies. This included brittlestars curled around corals, polychaete worms tunnelling inside corals, and corals growing on shells.

We used an oceanographic profiler to sample the chemical properties of the water to 2,000m. Although further analysis is required, our aim here is to see whether long-term climate change is impacting the living conditions at these depths.

A curious feature of one of the southern seamounts is that it hosts the world’s only known aggregation of deep-water eels. We have sampled these eels twice before and were keen to learn more about this rare phenomenon.

Using an electric big-game fishing rig we landed two egg-laden female eels from a depth of 1,100 metres: a possible first for the record books. 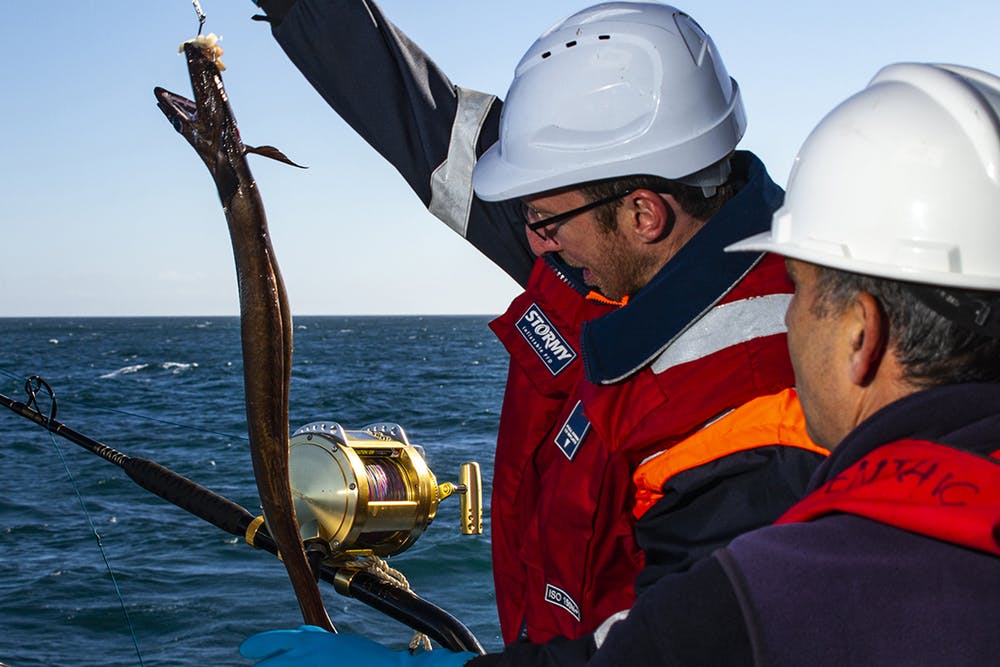 Dave Logan of Parks Australia with an eel landed from more than a kilometre under the sea. Image: Fraser Johnston/CSIRO

In a side-project, a team of observers recorded 42 seabird species and eight whale and dolphin species. They have one more set of data towards completing the first circum-Australia survey of marine birds and mammals.

More coral pedestals than we realise

An important finding was that living S. variabilis reefs extended between the seamounts on raised ridges down to about 1,450m. This means there is more of this important coral matrix in the Huon and Tasman Fracture marine parks than we previously realised.

In areas that were revisited to assess the regrowth of corals after two decades of protection from fishing, we saw no evidence that the coral communities are recovering. But there were signs that some individual species of corals, featherstars and urchins have re-established a foothold.

In coming months we will work through a sub-sample of our deep-sea image library to identify the number and type of organisms in certain areas. This will give us a clear, quantitative picture of where and at what depth different species and communities live in these marine parks, and a foundation for predicting their likely occurrence both in Australia and around the world.

Seeing what lies beneath with our deep tow camera

Previous post:
New secure tech keeping parents connected with their premature babies
Coming up next:
Looking for a low-gluten beer? Here’s what you need to know