View of the Gold Coast from a Boeing 737 on the way to Cairns. The water is soooo blue !

We wait in anticipation of droughts and floods when El Niño and La Niña are forecast but what are these climatic events?

The simplest way to understand El Niño and La Niña is through the sloshing around of warm water in the ocean.

The top layer of the tropical Pacific Ocean (about the first 200 metres) is warm, with water temperatures between 20C and 30C. Underneath, the ocean is colder and far more static. Between these two water masses there is a sharp temperature change known as the thermocline.

Winds over the tropical Pacific, known as the trade winds, blow from east to west piling the warm top layer water against the east coast of Australia and Indonesia. Indeed, the sea level near Australia can be one metre higher than at South America.

Warm water and converging winds near Australia contribute to convection, and hence rainfall for eastern Australia.

In a La Niña event, the trade winds strengthen bringing more warm water to Australia and increasing our rainfall totals.

In an El Niño the trade winds weaken, so some of the warm water flows back toward the east towards the Americas. The relocating warm water takes some of the rainfall with it which is why on average Australia will have a dry year.

In the Americas El Niño means increased rainfall, but it reduces the abundance of marine life. Typically the water in the eastern Pacific is cool but high in nutrients that flow up from the deep ocean. The warm waters that return with El Niño smother this upwelling.

Have El Niño and La Niña always been around?

El Niño events were first recognised by Peruvian fisherman in the 19th century who noticed that warm water would sometimes arrive off the coast of South America around Christmas time.

Because of the timing they called this phenomenon El Niño, meaning “boy child”, after Jesus. La Niña, being the opposite, is the “girl child”. 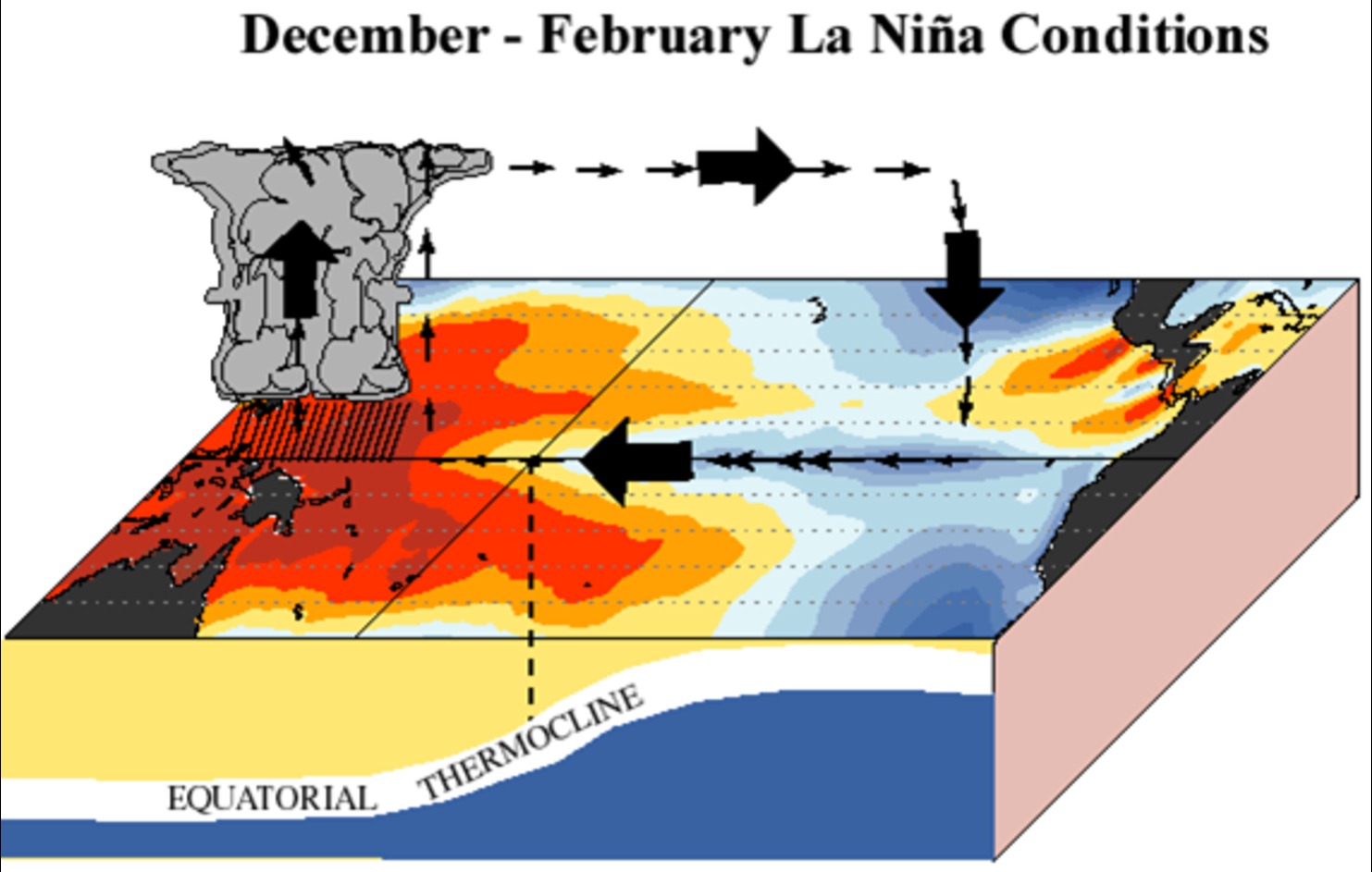 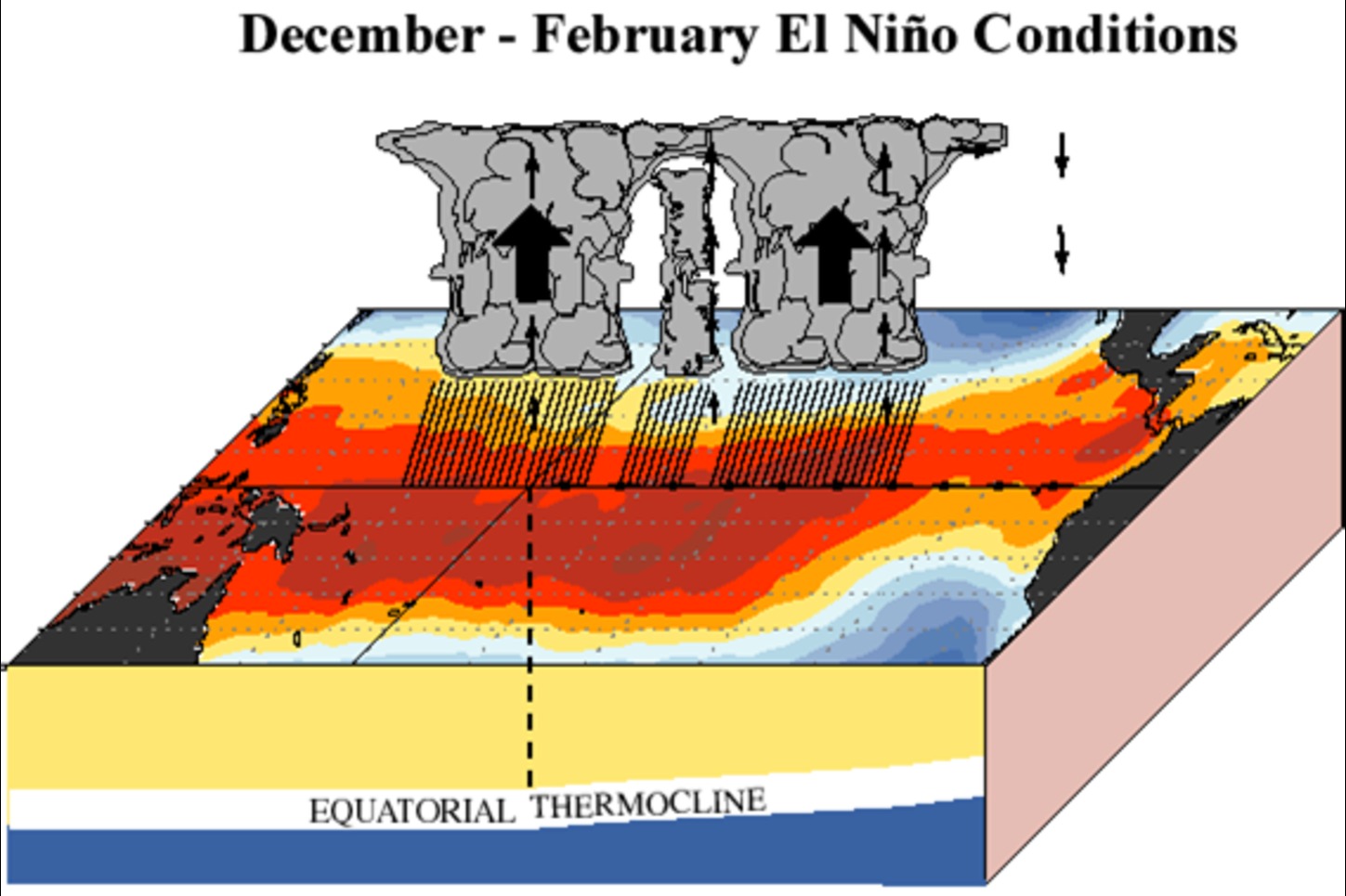 Being able to predict an El Niño event is a multi-million, possibly billion dollar question.

Reliably predicting an impending drought would allow for primary industries to take drought protective action and Australia to prepare for increased risk of dry, hot conditions and associated bushfires.

Unfortunately each autumn we hit a “predictability barrier” which hinders our ability to predict if an El Niño might occur.

In autumn the Pacific Ocean can sit in a state ready for an El Niño to occur, but there is no guarantee it will kick it off that year, or even the next.

Nearly all El Niños are followed by a La Niña though, so we can have much more confidence in understanding the occurrence of these wet events.

A variety of events 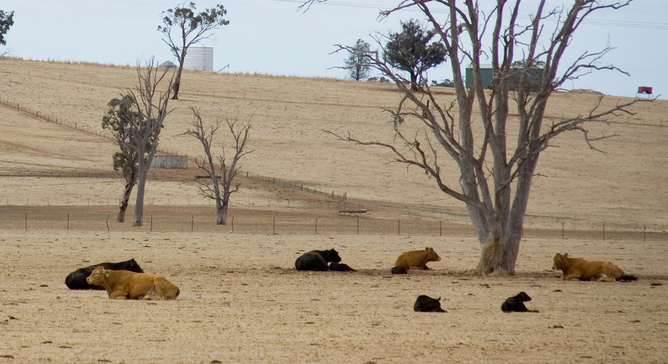 Predictability would be even easier if all El Niños and La Niñas were the same, but of course they are not.

Not only are the events different in the way they manifest in the ocean, but they also differ in the way they affect rainfall over Australia – and it’s not straightforward.

The exceptionally strong El Niños of 1997 and 1982 have now been termed Super El Niños. In these events the trade winds weaken dramatically with the warm surface water heading right back over to South America.

Recently a new type of El Niño has been recognised and is becoming more frequent.

This new type of El Niño is often called an “El Niño Modoki” – Modoki being Japanese for “similar, but different”.

In these events the warm water that is usually piled up near Australia heads eastward but only makes it as far as the central Pacific. El Niño Modoki occurred in 2002, 2004 and 2009.

Australian rainfall is affected by all its surrounding oceans. El Niño in the Pacific is only one factor.

As a general rule though, the average rainfall in eastern and southern Australia will be lower in an El Niño year and higher in a La Niña. The regions that will experience these changes and the strength are harder to pinpoint. 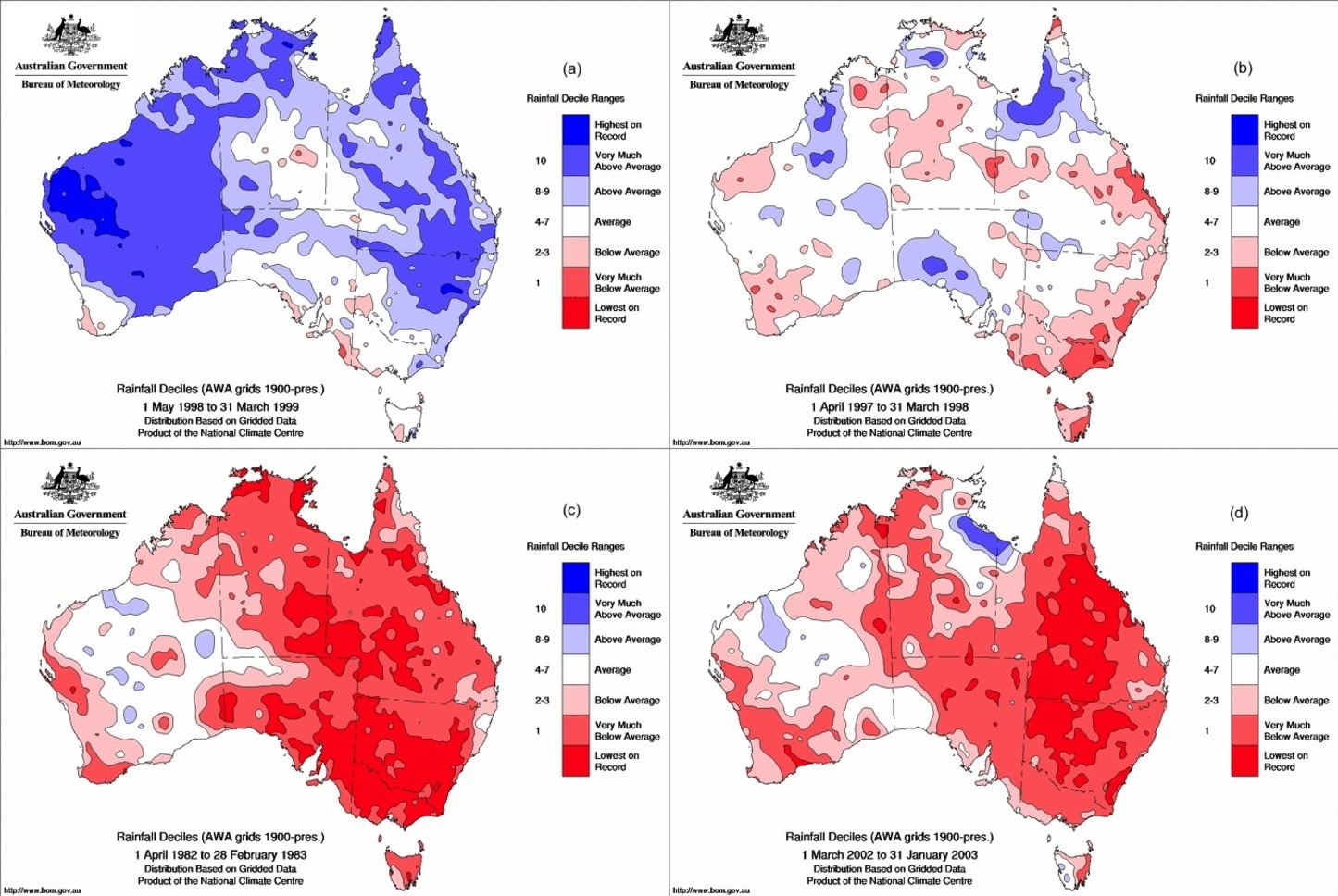 It is not yet clear how climate change will affect El Niño and La Niña. The events may get stronger, they may get weaker or they may change their behaviour in different ways.

Some research is suggesting that Super El Niños might become more frequent with climate change, while others are hypothesising that the recent increase in El Niño Modoki is due to climate change effects already having an impact.

Because climate change in general may decrease rainfall over southern Australia and increase potential evaporation (due to higher temperatures) then it would be reasonable to expect that the drought induced by El Niño events will be exacerbated by climate change.

Given that we are locked into at least a few degrees of warming over the coming century, it’s hard not to fear more drought and bushfires for Australia.

Previous post:
Manoeuvring Investigator!
Coming up next:
Radio astronomy: the next generation