Every week is science week on RV Investigator!

Every week is science week on RV Investigator!

In the wake of National Science Week, we check in with our research vessel Investigator on a voyage in the Coral Sea. 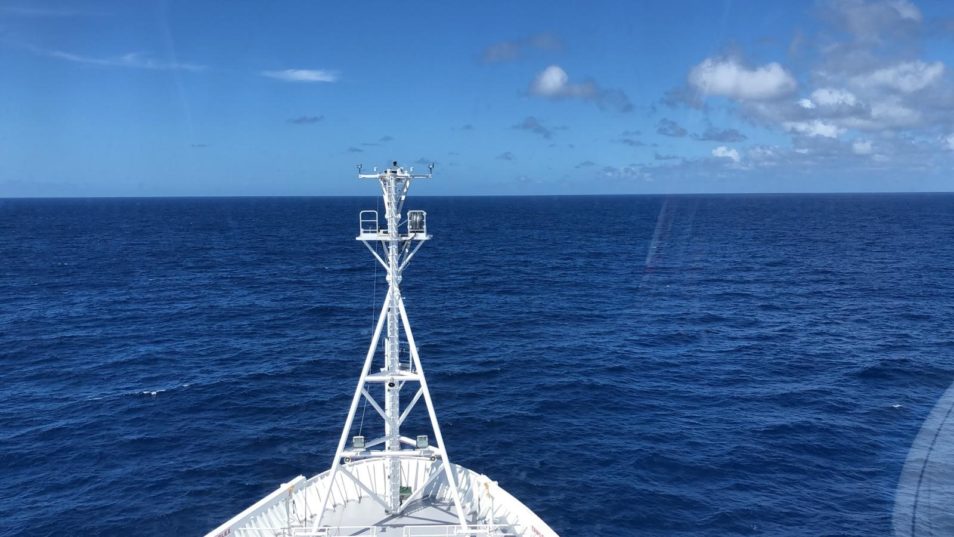 The secrets of the Coral Sea are not given up easily. But the scientists, research assistants and crew on RV Investigator are more than equipped to delve deep for answers.

Those onboard are an industrious and intrepid bunch, finding ways to overcome the challenges of remote work at sea. But what have they been up to in the last few weeks since the voyage began?

Our 94-metre floating laboratory is now drawing a picture of a chain of ancient seafloor volcanoes. The researchers will then describe the interplay of the sea plates, which are the focus of this voyage.

A typical geoscience voyage on Investigator comes with all the trappings of using dredges to sample the seafloor. This includes snagged dredging equipment 2500 m below the surface, broken shear pins which upend the basket carrying rock samples (sending them back to the seafloor), a two-to-three metre sea swell and 25 knot (46 km/hr) winds blowing for three straight days.

So far on this voyage, there have been 22 dredges of the seafloor from sites starting about 1000 km south-east of Cairns. By the end of this voyage, it is hoped more than 36 sites will have been surveyed and sampled in the waters of Australia, Papua New Guinea, Solomon Islands and New Caledonia.

Voyage Chief Scientist, Associate Professor Jo Whittaker from the University of Tasmania, said while most of the rocks being hauled to the surface were what was expected, the real value came when the ship arrives back at port.

“There is a lot of geochemistry to be done and age dating,” Jo said.

“We have basalt, lavas and carbonates. What we don’t have so far is continental rocks – rocks which could show that a large area of the seafloor out here was rifted from continental Australia millions of years ago.

“Early in the voyage, we did get some cool carbonate rocks which had alternate layers of algal and coral fossils. Algae needs sunlight to grow, so while the rocks were from about 1000 m down today, in the past they were at sea level. This highlights how sea levels have changed over time.”

A bathymetry image (seafloor image) of Frederick Reef. The scientists use this to pick rock dredge sites and better understand the seamounts deep below.

The science on Investigator is all around you, and around the clock. The science team, as they are known, work alternating 12-hour shifts. Everywhere you look, there are scientists, researchers and students busy with their work 24 hours a day.

Sitting in a small enclosed deck 25 m above the waterline is a dedicated trio of bird and mammal observers from Birdlife Australia. Led by Principal Investigator and BirdLife Tasmania Convenor, Dr Eric Woehler, the team (which includes volunteer observers Jessica Bolin and Josie Lumley) scan the horizon from dawn to dusk. They’re spotting, identifying and logging marine birds and mammals. And any plastic or other jetsam (rubbish from ships) that passes within range.

Since the start of the voyage, more than 6000 individuals from 23 species of bird have been logged. Red-footed, brown and masked boobies have been the main species. But winging their way around the ship have also been storm petrels, wedge-tailed shearwaters, and frigatebirds. With the ship heading further north toward Papua New Guinea, the eagle-eyed observers are now seeing white-tailed tropicbirds.

Eric has more than earned his sea legs and bird skills. He has clocked up more than 400 days at sea on the Australian Antarctic Division’s research and supply vessel (RSV) Aurora Australis. He’s been spotting, identifying and logging birds across the Southern Ocean from Australia to Antarctica. Now on his tenth voyage on Investigator, when Eric steps ashore from a voyage in January next year, he would have logged more than 140 days onboard and circumnavigated Australia in the process. 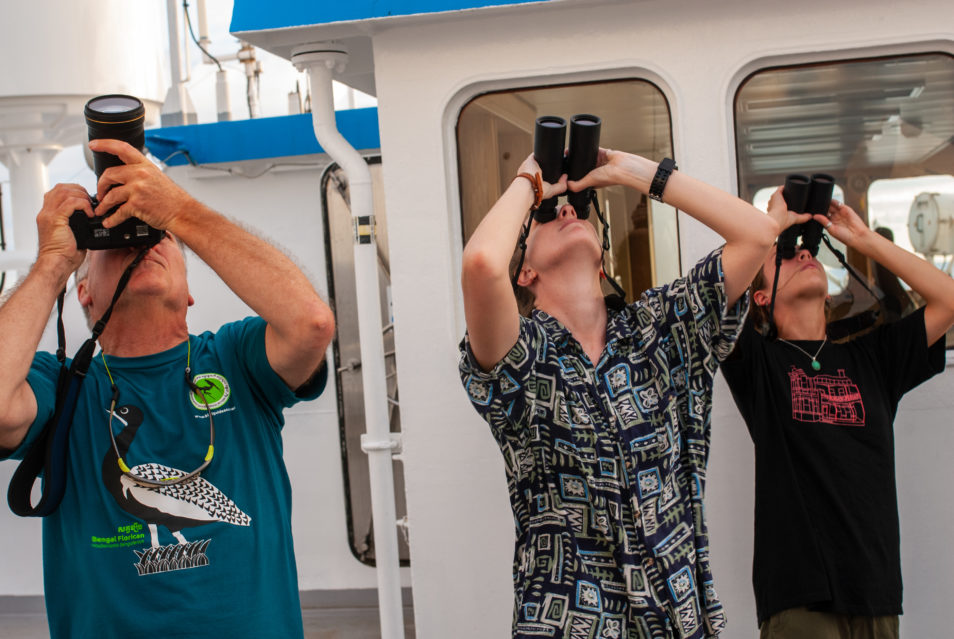 Look up! The scientists aren’t just looking deep below for the answers. Image: Huw Morgan

Eric’s enthusiasm for birds is matched by his passion for inspiring and educating anyone who comes within range on the life and times of seabirds.

“Australia has about 130 to 140 seabird species and I would expect we will see about 40 of those on this voyage,” Eric says from behind binoculars which seem glued to his face.

As he speaks, what seems like a black blur passes overhead.

“They have the lowest body mass to wing-loading ratio of any bird. They hardly have to flap their wings at all.”

“It’s a kleptoparasite – it steals food from other birds.”

Pilot whales, dolphins, a 2.5 m hammerhead shark, and a lone whale shark have also made appearances.

Lying about 1000 km east of Cairns, the ship is currently drawing near the very remote Mellish Reef. About 10 km long and 3 km wide, the reef has only a small area of land permanently above the highwater mark. This speck of land is the nesting ground for thousands of birds.

Before we reach the reef, Eric hurries outside to the open deck with his camera and captures a truly remarkable image of a pair of red-footed boobies right on the tail of a flying fish spooked out of the sea by the ship. 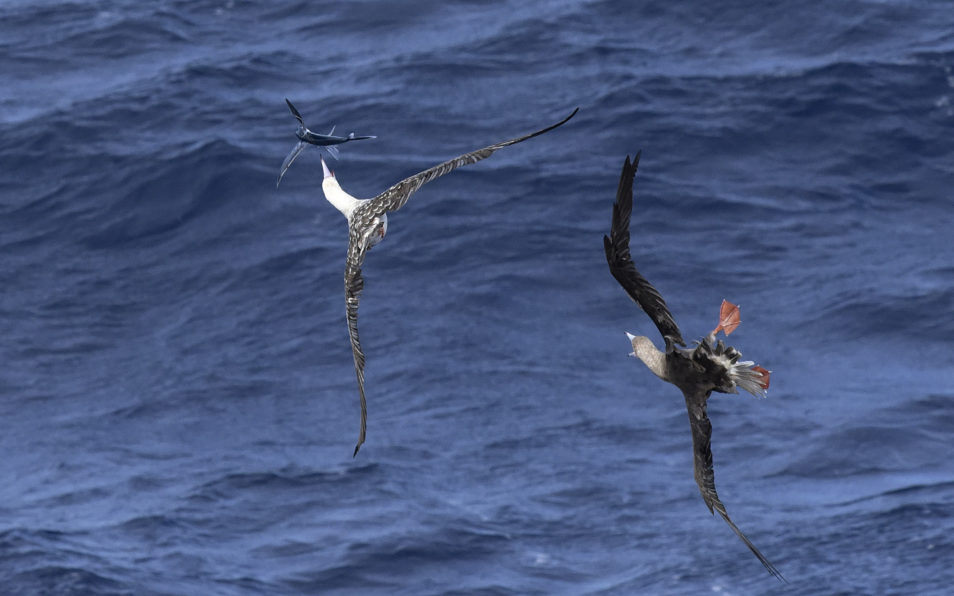 Take a dive with the scientists