Australian flowers and their celebrity lookalikes

Australian flowers and their celebrity lookalikes

Australia is home to lots of diverse species of flowers. And we found some of them had uncanny celebrity lookalikes!

There’s so much diversity in nature. Australia is home to more than 20,000 species of plants – and many more still to be scientifically classified and named.

While trawling through the flowers in our image databases, we noticed something strange. Some of the flowers bore a striking resemblance to famous faces.

So, we’ve pulled together a collection (ahem) of celebrity lookalikes. This is the list you didn’t know you needed, but bloomin’ did! 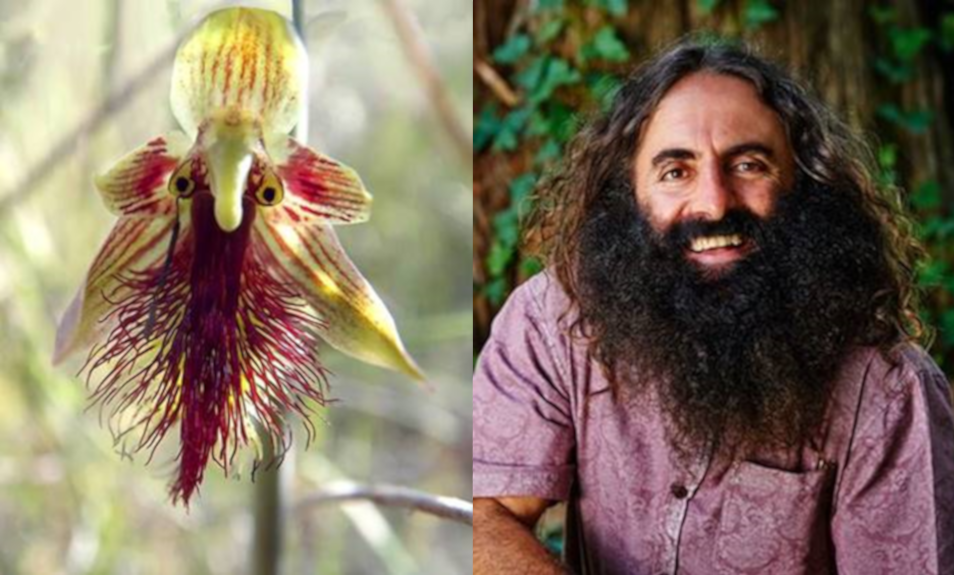 We thought it was only fitting to start with a fellow nature lover. Kicking us off is gardening guru Costa Georgiadis. And suitably his lookalike flower is commonly known as a beard orchid. As well as sharing signature facial hair, they both have a friendly face and a love of the great outdoors.

The Mountain beard orchid (Calochilus therophilus) is native to New South Wales and our nation’s capital. 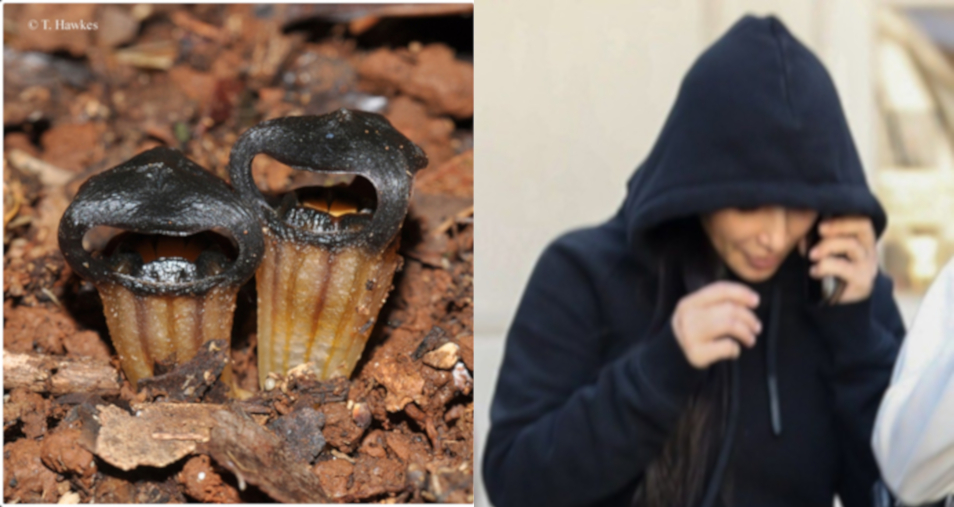 Under the hood: Black hoodies for both the fairy lanterns and their celebrity lookalike

Hiding from the paps with a camouflaging black hood is the fairy lantern (Thismia lanternata) … oh and Kim K-W.

This celebrity lookalike species was discovered in 2017, deep in the tropical rainforests of north Queensland. These plants flower beneath the leaf litter of the rainforests, which makes them very difficult to find. Therefore, they are very rarely seen or collected.

Fairy lanterns lack the light-absorbing pigment chlorophyll, so they suck nutrients from a special association with fungus.

Up in your grill: Celebrity lookalikes Katy Perry and Pseuduvaria mulgraveana

Small beetles pollinate the flowers and the caterpillars of Green Spotted Triangle butterflies eat the leaves. These rainforest plants are only found around the base of Queensland’s highest mountains, Mt Bellenden Ker and Mt Bartle Frere. You might flash a smile at the fact that Pseuduvaria spp. are a relative of custard apples and soursop. But hold your horses – the fruit isn’t edible.

Sporting a rocking hairdo, this Aussie orchid reminded us of a certain Barbadian songstress.

Scientifically known as Pterostylis pedunculata, this pretty plant is found across south-eastern Australia. It’s quite a common species unlike Rhianna who is most-certainly one of a kind!

When life gives you lemon, own it!

They might call it mellow yellow, but we think Lady Gaga and the flower are both visions in this hue. The soft petals are also a hit!

Neofabricia myrtifolia hails from the northern part of Cape York Peninsula in Queensland. It usually grows in open forest, heath and shrublands, and you can occasionally find them on rainforest margins.

Much like Gaga, it’s a popular plant for gardeners because of its good looks (not so sure about its singing voice)!

Seems like these celebrity lookalikes are the bells of the ball.

Enigmatic singer Sia with her face obscured by an oversized blond wig bares a striking resemblance to the Fairy Petticoats flower.

Fairy Petticoats or Elaeocarpus reticulatus occur from King Flinders Islands in Bass Strait to Fraser Island in Queensland. It’s a common small tree that produces lots of white to pink flowers, followed by blue fruits. The flower shares it’s white locks with Sia. But even more fortuitous is that garden stores call the most commonly grown variety ‘Prima Donna’.

It’s pretty amazing how diverse our native flora is. Diversity in nature (or biodiversity) is essential to support all life and make the ecosystem productive. No matter how small, all the parts have an important role to play.

And it’s the same for us humans too. The most productive, innovative and successful organisations are those with the most diversity. That’s why we marched in the Sydney Gay and Lesbian Mardi Gras.

Our theme this year was ‘Biodiversity: the rainbow revolution’ It was all about the variety of life and celebrating our rainbow world.

We were incredibly proud to be able to support our people at this important event.

Beyond Mardi Gras, find out how we're creating a diverse and inclusive workplace

Previous post:
Optical filters focus on the Sun
Coming up next:
Spotify playlist: Music you can Mardi Gras to