We're taking a look at some of the commercial successes founded on CSIRO innovation. 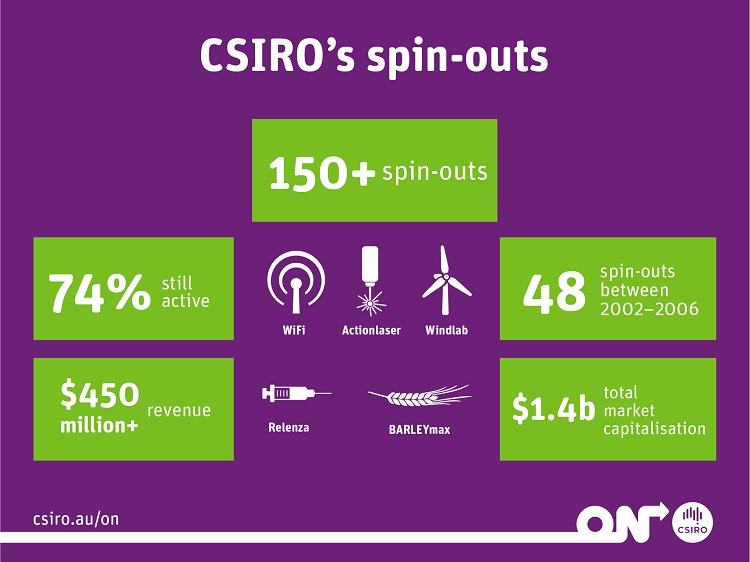 Spin–out (noun \ˈspin-ˌout\) the creation of a separate company from part of an existing firm.

As Australia’s manufacturing and resources industries slow down, technology startups are going to be critical in creating sustainable economic impact. Alan Noble, Engineering Director of Google ANZ, has said that tech startups could contribute $109 billion of GDP and add half a million jobs by 2033. That is massive!

The Australian startup ecosystem has come a long way. According to The 2015 Global Startup Ecosystem Report two-thirds of Australia’s startup activity takes place in Sydney. Australians have been known to be a talented bunch and this report confirms it with the lucky country ranking 6th out of 20 for access to high-value talent. But we’ve got work to do with our ecosystem value 80 times less that of Silicon Valley.

So, when you think spin-out or start-up, do you think of CSIRO?

Probably not, but that would be wrong. Did you know that we’ve spun out over 150 companies? That’s right, over 150! 26 of these were publicly listed, $1.4 billion total market capitalisation created and $450 million of revenue has been generated.

Below are just a few of our spinouts that have changed the way we live and work today.

It doesn’t stop there. We’re all about delivering the next innovation breakthrough that will change your life for the better. Our innovation program, ON, is doing this by actively building the connection between us and the existing entrepreneurial ecosystem.

We want you to help us bring the future ON. Connect with us.

Previous post:
Students go to sea sea see a digital tour of the HMB Endeavour
Coming up next:
Salps: the jelly beans of the sea, washing onto a beach near you this spring!