It’s World Food Day, and this year’s focus is on the role smallholder farmers play in feeding the world.

Food production is at record levels, yet 842 million people are estimated to be suffering from chronic hunger and under-nourishment. Many of these are themselves small family farmers.

One plant we’re working on is cow peas (one of the staple crops in parts of Africa). We recently got a Gates Foundation grant to further our research on improving their productivity.

On a broader scale, we’ve also cracked a problem with a globally-significant crop: wheat. With colleagues from the Sydney and Adelaide Universities, we’ve identified a gene that confers resistance to wheat rust – probably the biggest enemy of wheat crop yields worldwide.

Seafood is a major source of protein in both the developed and developing worlds, and we’ve found a way to farm the most delectable kind of all – prawns – more sustainably. Our Novacq™ fishless prawn food is now licenced for use in several South-East Asian countries. It makes use of the marine microbes at the base of the food chain to produce a prawn food that has the added benefit of increasing their growth rate by around 30 per cent.

Climate change is a pressing problem for us all, but some of the people most at risk are farming communities in countries in southern and south-eastern Asia. We’re collaborating with farmers in parts of Cambodia, Laos, Bangladesh and India to identify, select and test climate change adaptation options that are both viable and suitable for local communities. One of the things we’re aiming to do is develop and test new crop and water management practices for rice-based cropping systems that will outperform existing farming practices and can accommodate future climate variability and climate change. 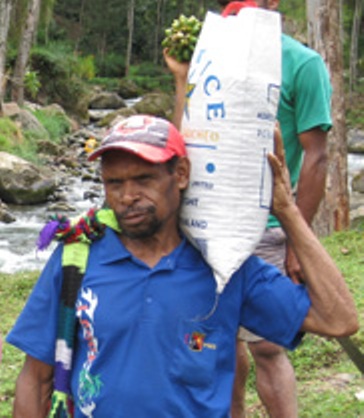 There are about 400 000 PNG households involved in coffee production

After all that work, we might be tempted to celebrate with a good cup of coffee. Maybe a PNG blend. There are more than 400 000 households involved in coffee production in PNG, and it’s that country’s most important export cash crop.

With our Australian and international partners, we’re developing new ways for farmers and researchers to learn from each other and identify ways to improve the sustainability of PNG’s coffee industry. We hope to identify the points in the coffee-food farming system that can be targeted for the best possible result in retaining and reusing scarce nutrient resources.

Previous post:
Sounding out the ghosts of the depths
Coming up next:
A Nickel for your vote